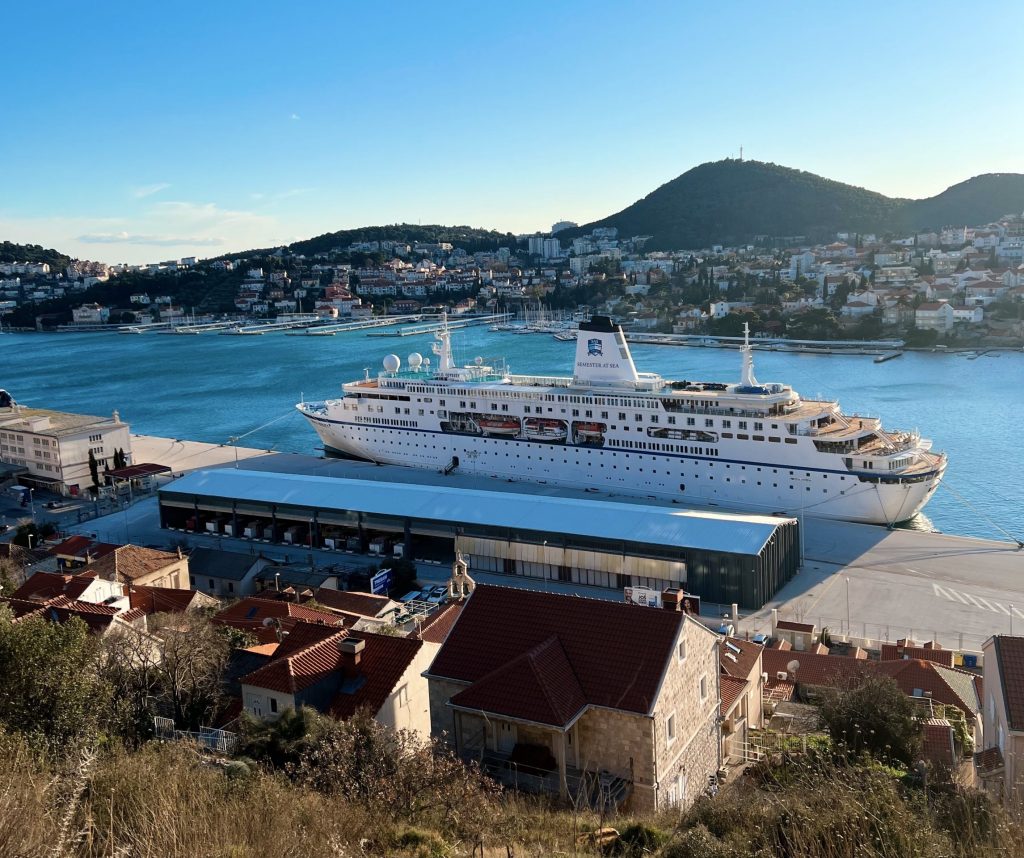 The MV World Odyssey this year became the first cruise ship to attempt sailing for four consecutive months since the start of the pandemic. The ship served as home to 600 students and faculty participating in Semester at Sea, a study abroad program that ports in 12 countries across Europe and the Mediterranean. The first cruise since the COVID-19 lockdowns, which included mostly university students from the U.S., stopped at ports from Greece to Scandinavia.

The ship had been sailing every academic semester for 50 years, but voyages were brought to a halt at the start of the pandemic in March 2020. In early 2022, with approval from EU nations to enter as tourists, along with a plan of action for managing the virus on board, the ship embarked on its 129th voyage.

Semester at Sea participants were required to be fully vaccinated for COVID-19 prior to embarkation in January. Even with participants being fully vaccinated, the program faced a COVUD-19 outbreak the following month that delayed travel to Spain by five days. The port of Barcelona said the ship was required to have fewer than 22 positive Covid-19 cases in order to enter the country. Despite the outbreak, no program participants suffered from severe symptoms, and none were in isolation for more than 10 days.

Gaylen Allen, a student on Semester at Sea, said that although she lived in fear of COVID during the program, she participated because she believes it’s important to be an active global citizen.

"We have to be able to live with this virus and still do the things we want to do."

"I’m the type of person who wants to physically immerse themselves in the world and actively engage with different cultures,” she said. “I also wanted to contribute to local economies that have been struggling with tourism."

Another student on the voyage, Noshir Patel, said that the globe has to learn to live with COVID-19.

"The world has been battling the pandemic for like two years now and after being stuck at my house most of that time, I realized I wasn’t about to let that be a permanent reality for me," Patel said. “I wanted to get out in the world and we have to be able to live with this virus and still do the things we want to do like travel."

The ship is also home to several doctors and nurses who administer weekly COVID-19 tests to students and faculty.

Nurse Kate Gillis, a staff member in the ship’s medical clinic, said that Semester at Sea changes lives for many students, so she wanted to help keep the program running with new COVID-19 safety protocols.

"We’re wearing the K-95 masks, we’ve got social distancing rules everywhere on the ship, we’re testing every week at least once or twice. We’re only able to continue sailing because of these measures we’ve taken," she said.

Early ports of call were at smaller EU nations, allowing students to get a look at some of the economies hardest hit by the pandemic — and feel that they are playing a part in the recovery.

Some countries are weighing economic recovery versus pandemic management. Malta and Croatia have been navigating ways to lift mask mandates and re-open public spaces despite the rise in Omicron.

"It felt like everyone in Dubrovnik was just Semester at Sea students, which seemed weird because I know Dubrovnik is known for being a really touristy city," said Southall. "Everything seemed to be closed by 10 and you’re supposed to wear your mask outside but it didn’t seem like people followed it that closely."

Another Semester at Sea student, Jafet Alfaro, said it was strange to see how rigorously some EU countries enforced COVID-19 regulations compared to the U.S.

"I go to university in Oklahoma and nobody is wearing masks and everything is open,” he said. “It was weird to go all over Europe and see that people are a lot more strict."

Birgit Trauer, who teaches Recreation and Tourism on Semester at Sea, said the economy in Malta and Croatia are recovering, but at a much slower rate than most places around the U.S. She also said she believes smaller countries like these need to find a way to live with the pandemic and return to normal life to save their economy.

While neither Malta nor Croatia have any mandatory closures of public spaces, business closures have naturally happened on their own as a result of a lack of tourism in areas like Valletta and Dubrovnik.

A year of unemployment

In the Croatian seaside city of Dubrovnik Stefan Jakovljević said he and his co-workers at Prijeko, a fine dining restaurant, were out of work for a year.

"It was tough not going to work but our government gave us some money to survive off of while the pandemic was still going at the beginning of it," Jakovljević said. "No restaurants were able to work because there were no tourists anymore."

Jakovljević also said that many restaurants permanently closed their doors once the pandemic hit because government funding wasn't enough to keep all of them alive.

Malta, an island nation that sits between Sicily and northern Africa, saw a 60% decline in tourism in the first year of the pandemic– one of the largest declines in the EU– according to the U.S. Embassy there.

Godwin Bonnici, a jeep excursion tour guide in Valletta, Malta's capital, said the economic losses were difficult to manage in the beginning but that tourism bouncing back.

“Now it’s alright but five or six weeks ago we used to have the masks,” Bonnici said.

As the world heads into the third year of the COVID-19 crisis, public health officials in some European nations are working to lift restrictions based on case counts and access to booster shots.

According to the U.S. Embassy in Malta, restrictions have become looser in terms of mask mandates but tighter in terms of vaccine requirements. In the country’s capital city Valletta, both tourists and residents must show a “green pass” to enter public spaces, which shows proof of vaccination.

Among Malta's residents, 88% were fully vaccinated and 65% had received a booster shot as of March, when the government announced plans to loosen the mask mandate. Croatia, however, was still requiring masks both indoors and outdoors. But while Croatia does require tourists to show proof of vaccination upon entering the country, they are not required to have a vaccine pass to access public spaces.

According to the U.S. Embassy in Croatia, as of spring 2022, the country’s population was 56% vaccinated and 21% of Croatians had received the booster.