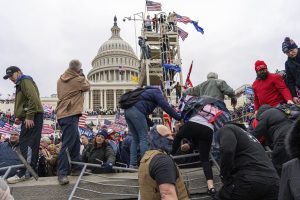 Photo by: Mihoko Owada/STAR MAX/IPx 2021 1/6/21 The United States Capitol Building in Washington, D.C. was breached by thousands of protesters during a "Stop The Steal" rally in support of President Donald Trump during the worldwide coronavirus pandemic. The demonstrators were protesting the results of the 2020 United States presidential election where Donald Trump was defeated by Joe Biden. While there was a significant police presence attempting to keep the peace - including law enforcement officers and agents from The U.S. Capitol Police, The Virginia State Police, The Metropolitan Police of The District of Columbia, The National Guard, and The FBI - demonstrators used chemical irritants to breach the interior of The Capitol Building. This, while the Democratic Party gained control of The United States Senate - sweeping the Georgia Runoff Election and securing two additional seats. (Washington, D.C.)