Sarah Wire: Inside the Capitol on Jan. 6 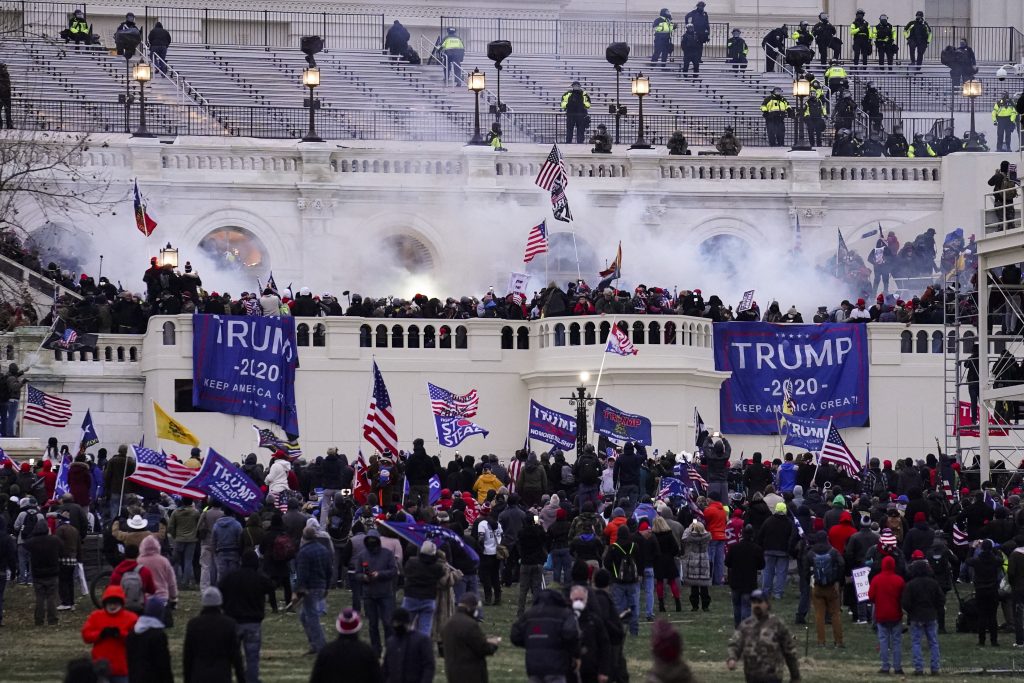 Sarah Wire graduated in 2009 from the Missouri School of Journalism and spent the next decade building on the training she got there. She rose steadily up the ranks, landing jobs at bigger and better papers and taking on leadership roles in professional organizations.  None of that, however, could have prepared her for Jan. 6.

On that day, Wire wasn’t thinking about her safety as she left the home she shares with her husband and young son for the U.S. Capitol. She spends most days interviewing the 55 members of California’s congressional delegation for the Los Angeles Times and watching them legislate from the press gallery seats above the House and Senate chambers.

She never imagined that in a few hours, she’d be crawling on the floor as police officers with guns drawn warned her to take cover.

“I’ll never forget the face of a very scared police officer yelling at me to get down,” Wire said.

The professors who trained Wire at MU never imagined they needed to prepare the aspiring young political reporter for such a scenario either.

“Armed insurrection was not in my syllabus if I recall,” said Charles Davis, now the dean of the University of Georgia's Grady College of Journalism and Mass Communication. But he’s not surprised she kept her cool and kept working. Even as a student, “Sarah wasn’t intimidated by anything that I can recall,” Davis said. “It’s rare. She can’t be shaken.”

At MU, Wire worked two years at the Maneater before finding her way to political reporting in the Jefferson City program. “She spent more semesters working with me than any other journalism student in the history of the state government reporting program, to this day,” said Phill Brooks, who founded MU’s state government reporting program in 1972 and was one of Wire’s editors in Jeff City. “She's one of the most intense public policy journalists I’ve taught in more than forty years.”

Other professors remember her for her work ethic. “Sarah was hungry. She couldn’t get enough,” said Tom Warhover. “Hungry to learn, hungry to do stories. She was ready.” Professor Emeritus Jacqui Banaszynski described Wire as "intense, intensely curious, challenging and willing to challenge.”

And so, on Jan. 6, with rumors swirling about the possibility of protests during the official count of the Electoral College ballots, Wire arrived at the Capitol well ahead of the official start of the ceremonial vote count.

“Something just told me I needed to be there early,” she said.

Her first inkling that something serious was amiss came, Wire said, when she realized that House Speaker Nancy Pelosi was no longer in the House chamber. Then, a Capitol Hill police officer told Wire that protesters were inside the Capitol building and tear gas had been released in the Rotunda.

Police told members of Congress to pull the masks from under their chairs. These masks are not COVID-19 masks, but instead gas masks, installed after 9/11. They look like an astronaut’s helmet with a motorized air filter. Wire had to don one too.

A police officer shouted to the press corps:  “Get to another door! Run!”

As people scrambled over and under railings, Wire worked to lead people to safety. As chair of the Congressional Standing Committee of Correspondents, “It’s part of my responsibility to look out for reporters on Capitol Hill,” she said. She could see sticks and bats being used to break the glass and police drawing guns.

There were lawmakers with military experience trying to negotiate with people breaking into the chamber, Wire said. She recalls one lawmaker praying, while another was on his phone describing the unfolding events to someone at the other end of the line.

Eventually, Wire and others were able to flee the chamber, running down multiple flights of stairs to a safe location. People were crying and visibly shaking, Wire said.

They stayed in the safe location for about five hours before the all-clear. Pelosi told members of the House they had an obligation to finish the job they started.  Wire felt she had to finish hers.

“At a certain point, you compartmentalize,” she added, explaining how she got through that night. “You stop processing what you’re going through at the moment, because you got to get the job done.”

After the proceedings finished and she filed her story, Wire went home to her family. “It was a couple days before it hit me what happened,” she said.