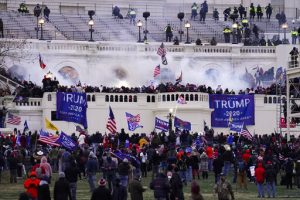 In this Wednesday, Jan. 6, 2021, file photo, violent protesters storm the Capitol, in Washington. People charged in the attack on the U.S. Capitol left behind a trove of videos and messages that have helped federal authorities build cases. In nearly half of the more than 200 federal cases stemming from the attack, authorities have cited evidence that an insurrectionist appeared to have been inspired by conspiracy theories or extremist ideologies, according to an Associated Press review of court records.