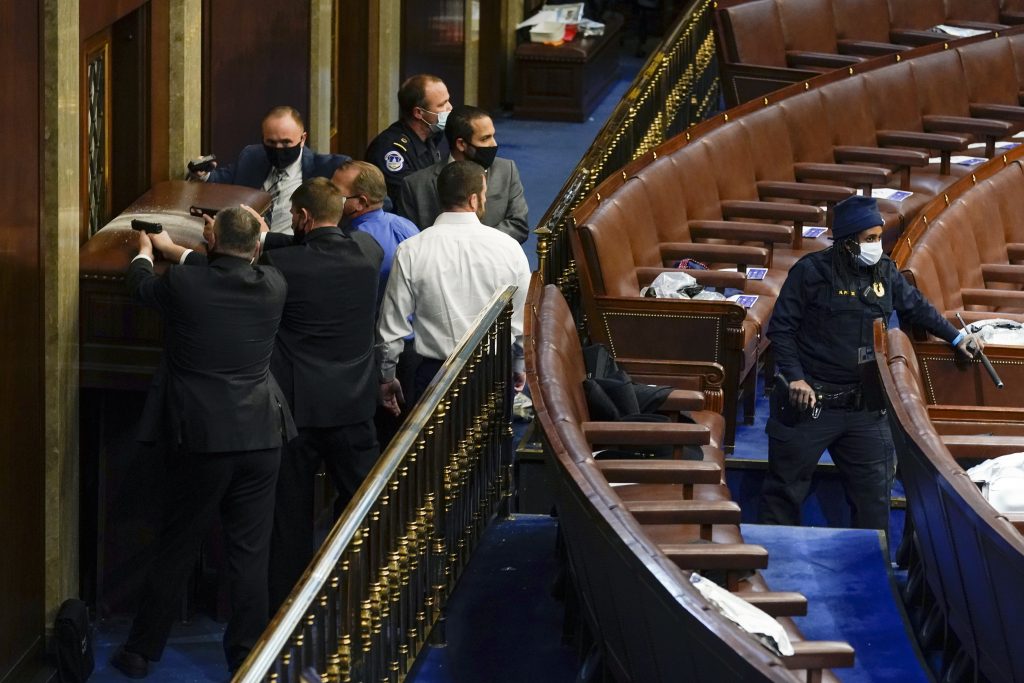 U.S. Capitol Police with guns drawn stand near a barricaded door as rioters try to break into the House Chamber at the U.S. Capitol on Wednesday, Jan. 6, 2021, in Washington. (AP Photo/Andrew Harnik)

In the midst of the COVID pandemic, Politico editor Angela Greiling Keane manages a team of 60 reporters covering politics across the country all from her desk in her Washington home.  This seems like a daunting job, but at this point, Greiling Keane is used to it and views her job as one essential to the integrity of our democracy.  So when rioters broke into the U.S. Capitol just 10 blocks away on Jan. 6, it hurt on many levels.

“When I first started in Washington, Democrats and Republicans talked to each other. There’s so much less of that now and you really are now seeing the nasty personal dynamics that didn’t really exist when I first got here,” said the 1998 MU School of Journalism grad.  This polarization and division is part of what led to the deadly insurrection on the Capitol on January 6. Although she was home when the attack occurred, Greiling Keane knew many colleagues who were there. "For me, it was professional but also personal...I consider it (the Capitol) part of the neighborhood," she said. "It felt like a personal attack on a building before we realized the degree of a professional attack on journalism."

Greiling Keane began laying the foundation for her career in the nation’s capital even before she graduated from Mizzou. She was part of the journalism school’s Washington program, which is an internship program which allows journalism students to gain experience in the nation’s capital. Greiling Keane, as part of that program, wrote for newspapers in Topeka, Kansas and Minneapolis, soon turning that experience into a job in Washington. Although Greiling Keane’s work ethic has had a lot to do with her success, she also gives credit to her alma mater.  “It was definitely the Mizzou experience that helped me get my foot in the door in Washington,”she said.

In Washington, Greiling Keane continued to rise up the ranks of journalism.  She served as president of the National Press Club in 2013; she is a former member of the Journalism and Women Symposium’s board. During the Obama administration, she was a Bloomberg White House correspondent.  Greiling Keane is currently resident of the non-profit National Press Club Journalism Institute.

Her world has changed from when she first started in Washington. Greiling Keane noted that one obvious change was the rise in technology. “My first job I didn’t even have a cell phone yet, much less one you could email on,” Greiling Keane said, adding with a laugh:  “When I was first starting out, if you wanted to report breaking news you would have to find a payphone and do it.”

While she was still at Bloomberg News, Greiling Keane met Barbara Cochran, now an emerita member of MU’s journalism faculty. They have worked together in the National Press Club Journalism Institute and Cochran is someone Greiling Keane considers a mentor. Cochran described Greiling Keane as smart, curious, a problem-solver, dependable, and well-organized. “If you were stuck in a fox-hole with someone, Angela is the person you would want to be stuck with… She just gets things done.”

One dissenting voice came from Taylor Keane, Greiling Keane’s daughter. When I asked her to use three adjectives to describe her mom, one of them she chose was messy. Laughing, she said: “She always has a bag full of newspapers on the kitchen counter that she wants to read and me and my dad always has to ask her ‘can you pick them up’?” Even her mom’s desk at home wasn’t all that organized, Taylor said. Despite this, Taylor admits that her mom has had an overwhelmingly positive influence on her life. Because of her job, Taylor has gotten to meet many important people such as the Obamas and the U.S. Women’s National Soccer Team just to name a few. “She’s taught me many important things in life and has sacrificed a lot so that I could do a lot of what I want too,” Taylor says.

What Taylor Keane and Cochran said about Angela Greiling Keane was much of the same. Both described a hard-working woman who is dedicated to the mission of providing “truth” to the public and helping others aspiring to do the same. “I want to be thought of as someone who is tough but fair...someone who supports the reporters,” Greiling Keane said, “and someone who helps people.”