After 159 years, Stars and Stripes is fighting for its future 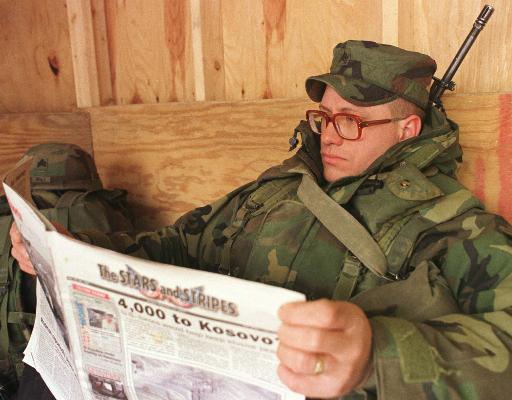 Sgt. John Hubbuch of Versailles, Kentucky, one of the members of NATO led-peacekeeping forces in Bosnia reading Stars and Stripes newspaper in 1999. (AP Photo/Amel Emric)

The first edition of the newspaper known as Stars and Stripes rolled off the presses in Bloomfield, Missouri, during the Civil War.

It marked the birth of a newspaper that, for 159 years, has served America’s troops with stories of interest to them while cracking jokes at the expense of the enemy — and sometimes, the military brass.

But earlier this year, Stars and Stripes almost shut down.

In February, the Pentagon proposed completely gutting Stars and Stripes’ budget for fiscal year 2021. Congress had not yet approved the budget when news broke that the Pentagon had ordered the newspaper shuttered on Sept. 30.

Journalists, members of Congress and the public expressed outrage.

One specific moment saved the newspaper, in the view of Steven Beynon, current Stars and Stripes reporter and military veteran:

“What actually saved us, in my opinion, was we just started trending on Twitter. I think it originated from an op-ed, but it kind of caught fire," Beynon said.

"Eventually, Donald Trump just said the Stars and Stripes magazine won’t be dispatched under his watch. He incorrectly called us a magazine, but whatever, I'll take it. And then Mitch McConnell's office eventually followed,” added Beynon, referring to the powerful Senate leader, a Kentucky Republican.

Stars and Stripes seems to have a secure future for at least another year, but some are taking matters into their own hands to ensure the paper is here to stay.

“Largely I'm doing this because their reasoning for it is bogus, for saying that it's a budget saving matter,” said U.S. Rep. Ruben Gallego, the author of a measure that directs the Department of Defense to cease its attempts to shut down the newspaper.

An attempt to censor

“This is a miniscule part of the defense budget,” added the Arizona Democrat, a Marine veteran, “and we think that this is just an attempt to censor good journalism.”

Stars and Stripes gets $15.5 million annually. The Department of Defense’s overall budget is $718 billion.

After Trump’s tweet, Col. Paul Haverstick sent an official memorandum to Stars and Stripes’ publisher rescinding an earlier memo that said Stars and Stripes had to stop publishing by Sept. 30 and close the organization by Jan. 31.

The newspaper will continue to be funded, Haverstick said, until Congress acts.

Congress appears to favor continuing publication of Stars and Stripes.

The House of Representatives approved a fiscal year 2021 budget that included funding for Stars and Stripes. While the Senate has not yet acted on the Pentagon budget, 15 senators from both parties have signed a letter urging continued funding for the newspaper.

In addition, Sen. Lindsey Graham, a South Carolina Republican who read the paper while serving in the Air Force, has separately expressed his support.

And Sen. Roy Blunt, the senior Republican senator from Missouri, Stars and Stripes’ birthplace, issued a strong statement of support.

“Millions of service members have benefitted from Stars and Stripes’ coverage of issues that impact their lives and our nation. I’m proud that the first edition of Stars and Stripes was published in our state 159 years ago and we are home to the National Stars and Stripes Museum and Library. There is broad, bipartisan support in Congress for ensuring that this historic publication has the funding it needs to continue providing its readers with independent, insightful reporting. As a member of the Senate Appropriations Committee, I’ll continue supporting the important role that public media organizations, like Stars and Stripes, play in keeping Americans informed.”

Stars and Stripes has persevered since its first publication in November 1861. Reborn multiple times to serve troops in various U.S. wars, the paper has been published continuously since World War II.

The paper plays an unusual role and caters to a very specific audience, says Ernie Gates, Stars and Stripes ombudsman.

While the paper “has a fascinating and rich history of independence and all of that is worth preserving,” Gates says,  that  its “ the really day-to-day value of Stars and Stripes is that you have a newsroom. You have reporters and editors and people selecting wire stories to be more focused on those.”

Gates likens “Stripes,” as it is known to employees, to a college newspaper that has a love-hate relationship with the campus.

“You can have a college in your town where you can be on good terms because of coverage,” he said. “And, you know, next month you can be on bad terms because of coverage because things happen that way. So, same thing is really true with the relationship between Stars and Stripes and the military. I know there are people in the military who’ll be happy to see Stars and Stripes shut down. I also know people in the military who rely on it to convey credible messages to the readers.”

Beynon also says Stars and Stripes fills a gap by covering issues the civilian media does not.

“You can turn on cable news and leave it on for an entire week, they might go the whole time without even bringing up the military or the VA,” he said. “I mean, when I'm in the room for committee hearings on the Hill with things that have to do with the VA, it’s usually only me and maybe one to three other reporters. The mainstream media doesn't necessarily cover it as much as they should.”

If Stars and Stripes is shuttered, “what the taxpayer would lose is one of only a handful of outlets that holds the most powerful government agencies accountable,” Beynon added. “No policy in Washington affects people more quickly than veteran’s policy. On top of that the military would lose what is essentially their local paper.”

Stars and Stripes has covered many battles in its 150 years of existence, but now it faces one of its own: revenue. Newspapers across the world are facing declines in advertising and subscriptions as new consumption shifts to digital platforms.

To find new revenue streams, Stars and Stripes is producing with special sections and stories that have “shelf life,” meaning they remain relevant longer than today’s news. These evergreen stories provide an important service for military members and their families.

“And when you move from Kaiserslautern, Germany to Aviano, Italy, there's always a lot of complications involved,” Gates said. “Even just getting to know your new place where you live. We're in South Korea today but are going to be in England next year. There's lots of transition knowledge that's really valuable.”

Gates adds that the “very enterprising advertising people” who work for Stars and Stripes have come up with special sections to attract print advertising. They include travel publications and entertainment guides, material that, as Gates says, is “designed to have shelf life to still be valuable three months from now, unlike tomorrow's newspaper.”

Questions for the future

Members of Congress are considering Stars and Stripes’ continued funding against the backdrop of a number of questions that could affect the publication’s future:

The House Armed Forces Committee requested an analysis of these questions.

Gates thinks these are fair questions to ask, and Stars and Stripes needs to have answers for them. Looking to the newspaper’s future, Gates realizes decisions need to be made regarding if it should move to more digital platforms. But Gates thinks print copies are used for more than just reading the news.

“The print newspaper is the best advertisement for Stars and Stripes itself. If you're deployed somewhere, and you see Stars and Stripes at the DFAC,” he says, using military shorthand for dining facility. “You see it at the PX or whenever you come home from deployment, you know what it is, you might even subscribe digitally. You don't have to be deployed to enjoy it and to find it relevant.”

In the Pentagon budget, Stars and Stripes’ funds are currently housed under Office of Public Affairs. Gates would like to see the funds placed somewhere where people see it and understand its business. Public affairs is not the same thing as journalism, he said.

“Because a newsroom has to have the ability to prove its independence by reporting honestly about itself," Brooks added. "It's not easy. But I think if you apply these news values to your work and to the expectations of the newsroom, the values of the newsroom, I think it actually naturally leads you to do honest work and to do credible work.”

Because they were not represented in the Pentagon’s budget planning last year, Gates said, Stars and Stripes’ leaders felt ambushed when their funding was zeroed out.

Gallego said he too was shocked by Stars and Stripes being eliminated from the budget.

“I did not know that it was on the chopping block until then,” said the congressman. “And that's when it became my advocacy, both overtly and to the legislative process.”

This time around, Stars and Stripes is included in the deliberations, which Gates is taking as a good sign.

And Gallego is hopeful for the newspaper’s future. “I expect Stars and Stripes will be around,” he said. “I think my amendment is going to pass. And I think it's going to survive for at least the next couple years.”

“People had to go to Congress and fight just like they've always had to fight,” she said. “But it needs to not have this capricious year in year out. Do they like us? Do they not like us? Over and over, always fighting for survival.”

Part of the problem is Stars and Stripes inevitably makes the politicians who fund it mad, Gallego said.