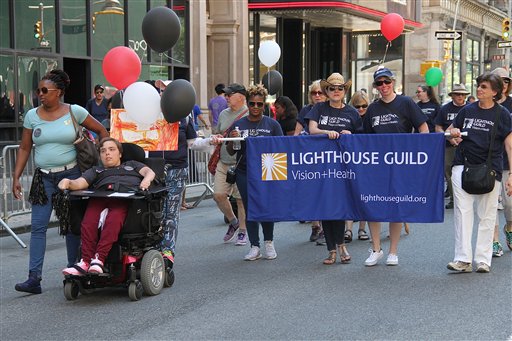 This is a transcript of the audio program for the first part in our series about accessibility in media.

Last week I went into work and the wi-fi was out. I was shocked into a standstill. Every 10 minutes or so, I would try a different task and then realize I couldn't do it because I needed the internet. I found myself getting frustrated because I felt like I should have easily been able to access my work. But I couldn't. I was missing a necessary tool. I didn't even know how much I relied on until it's gone. Lack of accessibility can cause difficulties for people of various abilities. Most people believe sign language interpreters would be at a presidential debate. But on September 29 2020, there weren't a lot of interpreters took away the opportunity for those who are deaf or hard of hearing to experience the debate in real time. With the Americans with Disabilities Act, media companies followed guidelines to make media accessible. But a lot of the regulations are not enough to provide equal accessibility. As journalists, we feel it is our mission to examine what accessibility media means, both for consumers and producers of the news. Accessibility news is more than just allowing people regardless of ability to consume news. It's about equal access to news and jobs in the news media.

So sometimes the captioning is fine. And then also other times, like they're the word they're completely wrong. for emergencies that will say, you know, for though the word will come and cookie, I'm like cookie, where did that come from? You know, so, like, how did that word come in? So it's really, you know, sometimes words are a little bit off. So going back to having interpreters there. It's tough.

That was journalist Crystal Cousineau. Now according to the Americans with Disabilities Act, captioning meets the criteria for equal accessibility. But Jethro Woodall another deaf journalist who works with Cousineau disagrees. captioning is an English which for many in the deaf community is not their first language. So on top of being inconsistent, a lot of people who are deaf have to translate captions into ASL, American Sign Language, luckily, would all love the challenge.

Typically, the news is caption so I'll be reading them in English right and have to visualize how this might look in my first language which is a 3-D language in ASL. So translating this into ASL is really fascinating process and creating the news and sign I love it.

Wooddall works at Sign1 News, where both he and Cousineau now are news anchors. Recently they have worked on sharing information to the deaf community about COVID-19 as pandemic updates have been difficult to access. In September 2020, a judge ruled that the White House had to provide an ASL interpreter at COVID-19 press briefings. After that ruling, the court said in a statement, quote, closed captioning and transcripts may constitute a reasonable accommodation under some circumstances, but not here. End quote. Cousineau emphasizes the importance of interpreters, especially throughout the pandemic. Without them she can't have access to the news at all.

And we let everybody know in the deaf community what's going on in their states. So we do try to get get the information out to them as much as possible from state to state when the interpreters are provided. And if they had a an interpreted error at the press conference, and that's with some of the information that they have. If they didn't, then we're pretty much stuck.

It is a challenge for people who are deaf to get their news. Candace Jones, a deaf news anchor speaks on how it goes even deeper. A lack of diversity in news sources is also a form of inaccessibility.

The deaf community has very limited options to news networks and sign language or facilitated and communicate in ASL. Maybe one or two options total.

People with disabilities are often portrayed in a very stereotypical ways. So it's often inspiration porn, where the person with a disability is portrayed as some hero-like person just for doing everyday stuff with a disability, or they are portrayed as the like poor victim that is suffering all day long and can't enjoy anything in life. And both of these are very harmful for people with disabilities because it kind of plays into this whole ableism thing because the people around us already have like a very wrong view of what we can do and what we can achieve and like, by portraying us in a wrong way, it's just adds to our burden.

Sturm is one of many with disabilities trying to fight journalistic stereotyping from inside newsrooms. It's not always easy. Harmful language and damaging narratives can widen the gap between people of all abilities. As a freelance journalist Sturm has seen problematic language edited into her own work,

Maybe it would be easier for me if I was sitting next to my editor, and I could just say, Hey, what are you doing? They're kind of he's not, like use that word. But it's often like when you're freelancer, you just like get an email, and it says, Hey, your piece was published. And then you see it was edited, and you can't do anything about it. Because it's already over the source of these problems, a lack of education and awareness. Lots of editors don't really half the time, I don't want to spend the time to actually get educated about that, like, even when I point that out, base, build on really learn. And that's the kind of frustrating part. But yeah, education is a big part of it.

Many newsrooms seem not to realize accessibility and media can go hand in hand, accessibility or lack thereof has a far reach, it affects communities in every corner of the world and can lead to a serious drought of information,

It's kind of seen as a burden to provide that access in the newsroom. And then on the other hand, it's also like, people are so scared of like just interacting with other with people with disabilities, because they, they sometimes they're afraid of saying something wrong. Other times they have this typical stereotypical image of you, in their mind.

Stereotypes are one of the biggest barriers to discussing accessibility Sturm's solution:

Just ask the person, him or herself what they want to be referred to, if they want to have person first language, identity, first language or whatever. It's very simple, actually. And there are like tons of resources online, that talk about language.

The fight for accessibility benefits those who need it, and it can help newsrooms. Brian Gould, who will hear from more in part two of this series says accessibility is inclusive for all,

When you're creating or you're providing a benefit for somebody with a disability, you're actually making it easier and more inclusive for a whole bunch of people. For example, if you're using texts and background that has sufficient color contrast, that's not only going to help people with specific visual impairments, it's going to help everybody. If If you have captions, it's going to help a whole lot of people and be better in the long run than if you don't have it.

Many news organizations would like to introduce more accessibility into newsrooms, but are worried about associated costs. To hear more from Gould and learn about the accessible web design and news media, tune into our next episode with producers Eleanor McCrary, Noah Crider, Abby Orf and Caitlin King, I'm Isabella Paxton for Global Journalist.