How to make news accessible. Really. 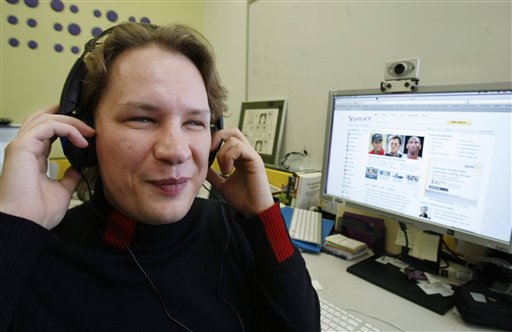 In his Nov. 23, 2009 photo, Victor Tsaran, co-director of Yahoo's "Accessibility Lab", uses a headphone to listen to his Yahoo homepage in the lab at Yahoo Inc. headquarters in Sunnyvale, Calif. The "Accessibility Lab" allows programmers and developers to try various assistive technology software and hardware such as screen readers, Braille keyboards, a head mouse, joy sticks, trackballs and other tools employed by disabled users to navigate the Web. "Our goal is to make people feel more at ease with disabilities," explains Tsaran, who is blind. "And our task is to make technology work for people. Accessibility is a big big big big part of that." (AP Photo/Paul Sakuma)

Five years ago, Sandy Murillo could not have been an associate producer at CRIS Radio, a daily podcast that reads newspapers and other periodicals to people with visual impairments. The newsroom's production tools didn't work for people who can't see well.

Now, Murillo runs the show with a co-worker who is also blind.

For most of the last two decades, a career in radio production — long an option for blind or sight-impaired journalists — became off limits to anyone who couldn’t see well. That’s because digital technology changed audio production from a tactile process of clipping and editing physical tapes to a visual one. Suddenly producers had to be able to see tracks on a computer screen and “cut” with mouse clicks.

This multi-media package was written and produced by: Noah Crider, Isabella Paxton, Eleanor McCrary, Abby Orf and Caitlin King. To read a transcript of the podcast, click here.

Now, even newer technologies can bring blind and sight-impaired editors back into the production process. But only if newsrooms hire them.

Although a series of federal laws make discrimination against people with disabilities illegal,  employment rates for people with disabilities have remained relatively unchanged, said Greg Polman, senior vice president of policy at the Chicago Lighthouse, an organization that provides rehabilitation services as well as assistive technology, education and employment opportunities to people who are blind, visually-impaired, disabled or veterans.

He said the journalism field is especially competitive and people with disabilities aren’t always considered first because employers aren't educated about different disabilities and view disability under what some experts call “the medical model.”

“[Employers] think of the medical-side of the disability instead of the person-side of disability, where they perceive them as not quite as whole as other people,” said Polman.

Part of the Lighthouse’s mission is to make products and services available to the broadest audience possible. Polman focuses on making jobs and technology more accessible to people with different types of abilities.

Murillo is an example of what a non-sighted but otherwise qualified audio producer can do when provided with the right equipment and facilities.

Workplace barriers to people with disabilities are mostly about a lack of will to overcome them, said Polman. Murillo agrees.

“There's still unfortunately that attitude among the majority of employers that people who are blind might not be capable of working as well as sighted individuals,” she said.

The best way to create accessible services is to ask people who know about and understand the needs of all kinds of abilities, said Howard Rosenbloom, chief executive officer of the National Association of the Deaf.

“Why not consult with a deaf person who knows how to make the best possible service that deaf people will enjoy?” said Rosenbloom. “The National Association of the Deaf is available. Other organizations and experts are available too.”

“When a company sees them for the first time it seems like an unachievable standard,” said Gould, “but they really are just the baseline.”

Some of the guidelines, such as captioning, benefit a far broader audience more users than the one for which they were intended. “When a video is captioned on social media, it tends to get more hits,” Gould said.

Anyone who has ever sneak-watched a video in the middle of a boring meeting will appreciate that fact. So will anyone who doesn’t understand the original language well.

Understanding the potential business benefits “changes the thinking from having to satisfy a checklist of accessibility requirements that have been thrust upon me to actually broadening your audience and making a much more inclusive experience through universal design,” said Gould.

In an era when media seems, at times, maddeningly intrusive, it’s easy to take one-click, 24/7 availability for granted and forget that not everyone has the privilege of being inundated.

“How we access it is something that is sometimes overlooked,” Murillo said, “I hope that this and other similar projects create more awareness.”