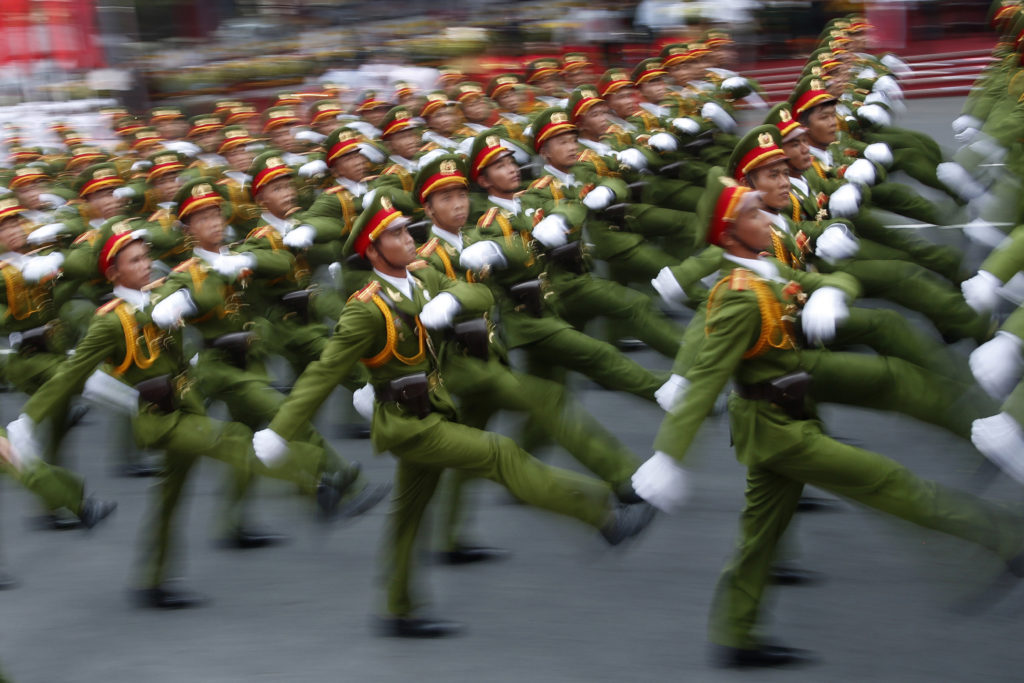 Military personnel take part in a parade celebrating the 40th anniversary of the end of the Vietnam War which is also remembered as the "Fall of Saigon," in Ho Chi Minh City, Vietnam in April 2015. (AP Photo/Dita Alangkara)

Dang Xuan Dieu has paid a heavy price for resisting the Vietnamese government.

A community activist, blogger and frequent contributor to the Catholic news outlet Vietnam Redemptorist News, a site that often reports on human rights violations, Dieu was arrested in July 2011 and charged with attempting to overthrow the Southeast Asian nation's Communist government.  He was held without trial until January 2013, when he and 13 other writers and human rights activists were convicted after a two-day trial in the central city of Vinh. 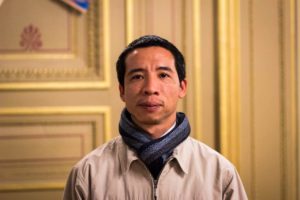 Dieu was sentenced to 13 years in prison and five years of house arrest under Article 79 of the country's penal code, which criminalizes activities aimed at overthrowing the government. He was also accused of being a member being of Viet Tan, an exile-run political party banned in the country.

Such trials aren't unusual in Vietnam. The Communist Party maintains near-total control over the Vietnam's judiciary, media and civil society. Internet in the country is heavily censored, and nearly 100 political prisoners are behind bars, according to Amnesty International.

Expressing dissent in Vietnamese prisons is even harder. The country's Communist government often seeks to pressure inmates into confessing to alleged crimes in prison, and if they refuse, they can be beaten or tortured.

Yet resist is what Dieu did. He refused to confess, refused to wear a prison uniform and periodically went on hunger strikes to protest his detention and the treatment of prisoners.

“In Vietnam, a lot of people are arrested where they are harassed and tortured, which forces many people to confess their crimes," says Dieu, 39, in an interview with Global Journalist. "I never accepted the charges and chose to not admit to any guilt. Because of this, I was unable to see my lawyer or my family.”

In his six years in prison, Dieu endured extensive torture and harassment. He was severely beaten for refusing to wear the prison uniform, and was held in solitary confinement for extensive periods in what he described as a "tiny room with no room to breathe." According to Amnesty International, he was also shackled in a cell with another prisoner who beat him, forced to drink unclean water, denied access to water for bathing and was forced to live in unsanitary conditions without a toilet.

In early January 2017, as U.S. Secretary of State John Kerry traveled to Vietnam, Dieu was granted early release on the condition that he immediately leave the country. Now living in France, Dieu is a student and continues to blog about Vietnam. Through a translator, he spoke with Global Journalist's Shirley Tay about the abuse he faced in prison and the country's media climate. Below, an edited version of their interview: 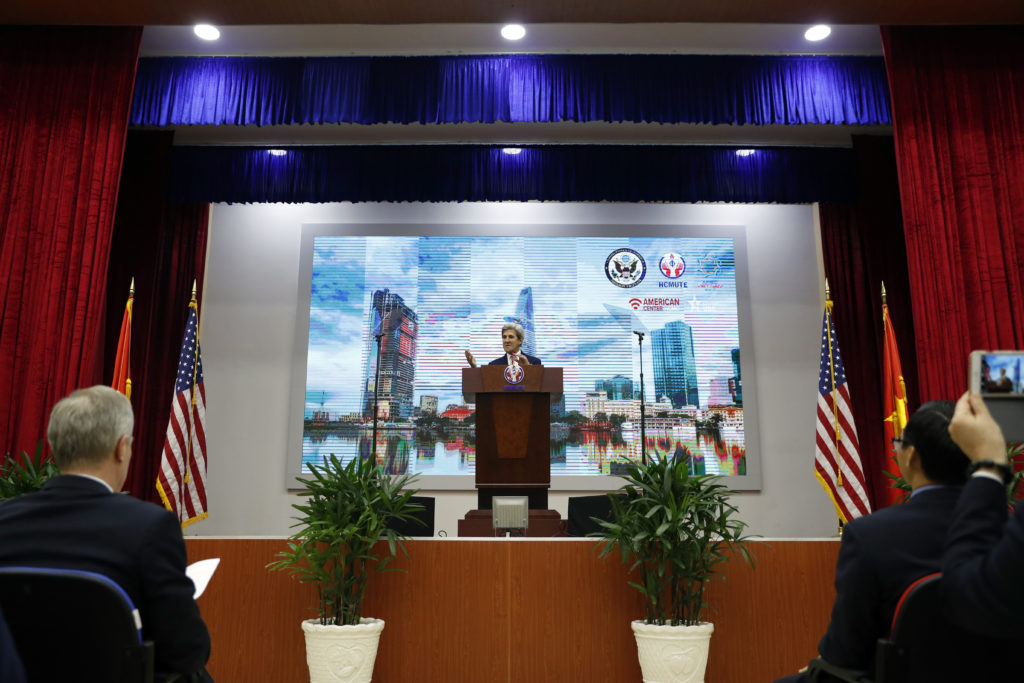 Global Journalist: How did you get into journalism?

Dang Xuan Dieu: I was a student and contributor to the Vietnam Redemptorist News, and I would write about social justice issues. I created my own blog, Tâm và Tầm [Mind and Games] and also worked with a news website Dang Luon.

[Vietnam] restricts independent media and control all media outlets to maintain power. All media is monitored by the Communist Party of Vietnam, so state bodies end up creating their own media or newspapers. There are probably 600 media outlets in Vietnam at the moment, but all are currently controlled by the government. When I was active in 2011, writing blogs and independent news articles was actually quite dangerous.

GJ: What was some of the work that got you in to trouble?

Dieu: While I am Catholic, I also work on other forms of activism. The Vietnamese government often tries to control the information that people are able to have. So I created a small, independent organization to promote education on things like safe sex, pregnancy, and other issues that youth face. Because it was an independent group, we were often targeted. We were asked to go to the police station several times when we were organizing in various parishes.

During this time, I started connecting with civil rights activists from overseas who taught me how to manage and organize independent civil society organizations. After that, I traveled overseas to attend some of these classes. On the way back to Vietnam, I was charged for attending a class on leadership training and nonviolent struggle.

GJ: Can you tell me about your time in prison?

Dieu: In prisons, they have their own systems to punish prisoners. There are areas that allow for people to move freely and do normal, day-to-day activities, but there are also areas within the normal prison that are like a prison within a prison within a prison. So I was in what you would call a third-degree prison area, where people are primarily shackled and kept in solitary confinement.

After that person was transferred, I started advocating for the rights of prisoners, such as writing petitions to officers regarding mistreatment. As a Catholic, I wasn't allowed to practice my faith or read the Bible. There were several other injustices which led me to begin a hunger strike.

What was worse was that they actually told my family that I refused to see them, rather than that I wasn't allowed to see them. Because of this, I held an extended hunger strike where I ate only one meal a day for nearly a year, and this led to a transfer of prison locations.

GJ: How did you manage to get out of prison?

Dieu: There was another prison inmate who lived close to my cell, where I had been tortured and mistreated. When he was released, he actually told the wider community about what was going on in prison. At that time, the prison wasn’t able to block information going in and out of the prison.

So the community started organizing campaigns calling for my release, and there were diplomats from the European Union, France, the U.S., Australia and Sweden who visited me. At that time, the EU diplomat asked if I wanted to be exiled to a country in Europe. I refused because I wanted to advocate for the release of other people, not my own release.

After the diplomat's visit, they took me to a different cell and then never allowed me to leave that area for about six months. The situation started becoming dangerous to my life and luckily, another inmate who was not a political prisoner, but just a regular prisoner, was released and contacted my family to inform them of my prison conditions.

So the EU and a French diplomat visited me again, this was during the time of French President [François] Hollande's visit to Vietnam in September 2016. My family was able to pass me a letter asking me to go into exile. Upon receiving that letter, I agreed. After that, it took another three months for them to arrange it. 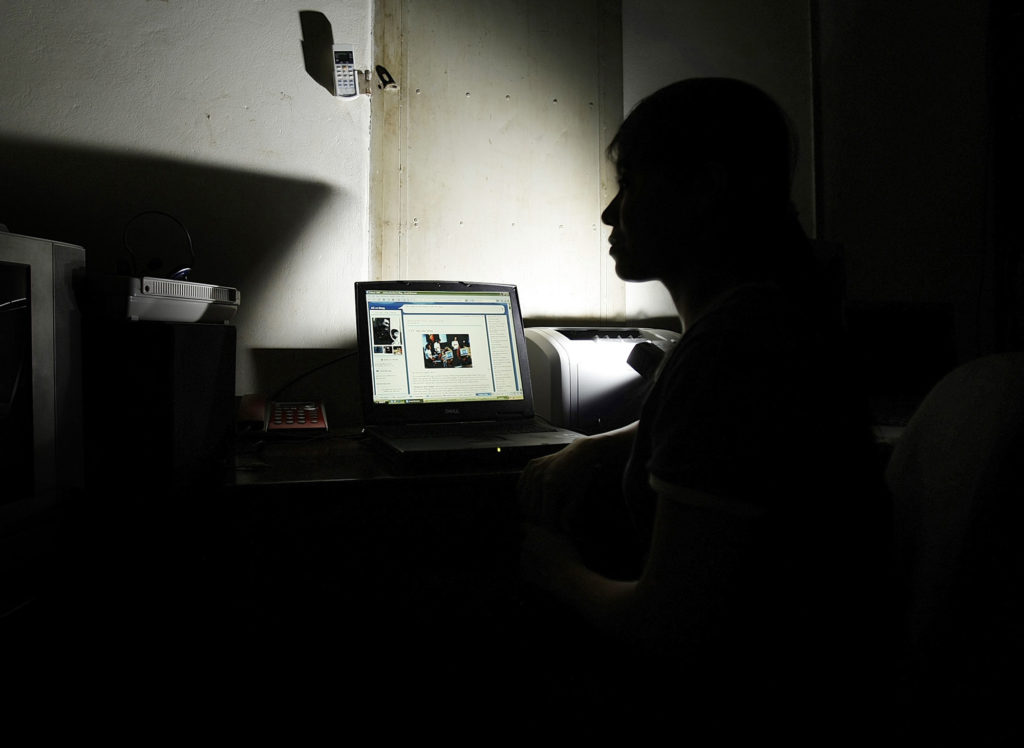 A blogger who wished to remain anonymous poses for photos with her blog on her computer screen in her home in Hanoi, Vietnam in 2008. (AP Photo/Chitose Suzuki)

GJ: At that point, were you ready to go in to exile?

It was only the letter from my mother which pushed me to choose to be exiled. It was because my mother is fairly old now, and she wanted to see me released before she died. I was determined, I was willing to die in prison rather than be exiled. The Vietnamese government tries to push activists outside of Vietnam, because they see that it's not a win for activism. And obviously, for humanitarian reasons, a lot of the community advocates for the release of these prisoners.

GJ: Do you have plans to return?

Dieu: I want to return to Vietnam, but it depends on there being changes through international pressure. If I were to return now, I would definitely be arrested. I will just have to wait.