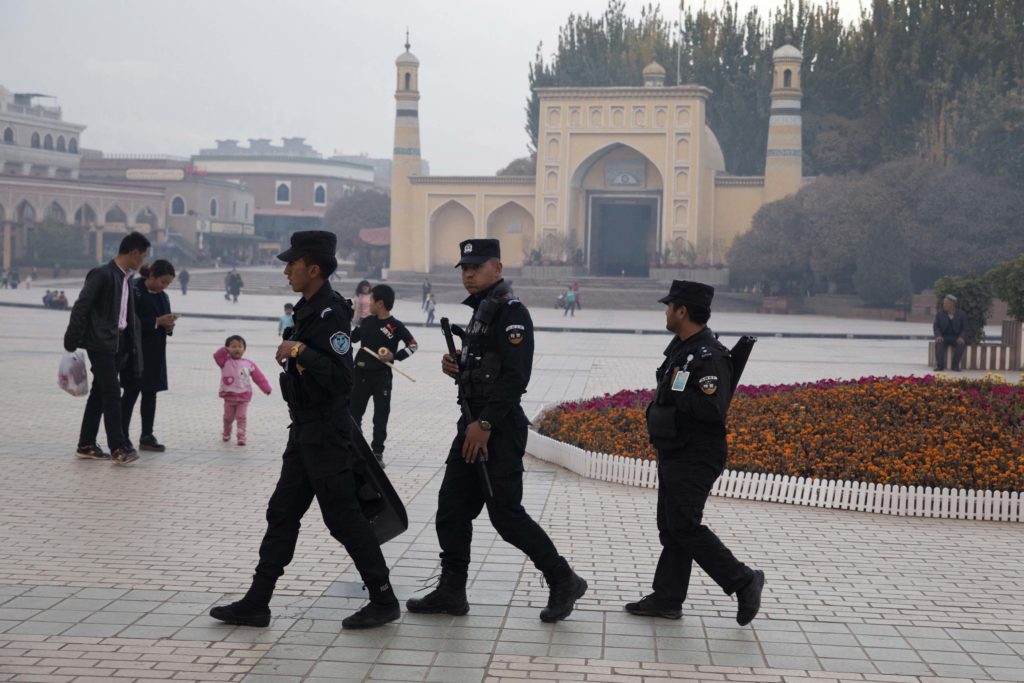 The Id Kah mosque in the western Chinese city of Kashgar had long held thousands of worshipers every Friday.

Yet as a government crackdown on China’s Muslim Uighur minority intensified earlier this year, news agencies including AFP reported that Id Kah mosque, like other mosques in China’s Xinjiang Uighur Autonomous Region, is now all but empty even on holy days. 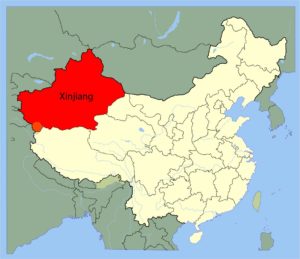 The reason: mosques in the Alaska-sized region of 22 million people have been targeted by a massive monitoring campaign, including surveillance cameras with facial recognition systems and requirements that worshipers swipe an identity card to enter. It’s all part of what analysts say is a heavy-handed effort to integrate China’s roughly 11 million Uighurs into mainstream Chinese society – at the cost of the destruction of Uighur culture.

“The Chinese government is really returning to its Communist ideological routes,” says Adrian Zenz, a researcher at the European School of Culture and Theology in Germany who studies ethnic policy and public recruitment in Xinjiang. “It is decidedly against any religion…because any religion is a competing ideology.”

The campaign extends further than monitoring those who pray in public. In August, the U.N.’s Committee on the Elimination of Racial Discrimination questioned Chinese diplomats about reports that as many as 2 million Uighurs and other Turkic Muslim minorities had been sent to political “re-education” camps.

Those detained and sent to the camps may have committed minor transgressions like donning a face veil or calling a family member outside the country, says Timothy Grose, a professor of China Studies who researches Uighurs at the Rose-Hulman Institute of Technology in Indiana.

Inside the camps, Uighurs are forced to take classes on Communist ideology, learn Mandarin Chinese, and undergo psychological screenings where doctors may treat devotion to Islam as a mental illness, he says. In some cases, those detained have reportedly been tortured.

The scale of China’s effort has left the region’s Uighurs “in a constant state of paranoia that maybe you’re next, maybe you’ll be the one who disappears,” says Grose, in an interview with Global Journalist. 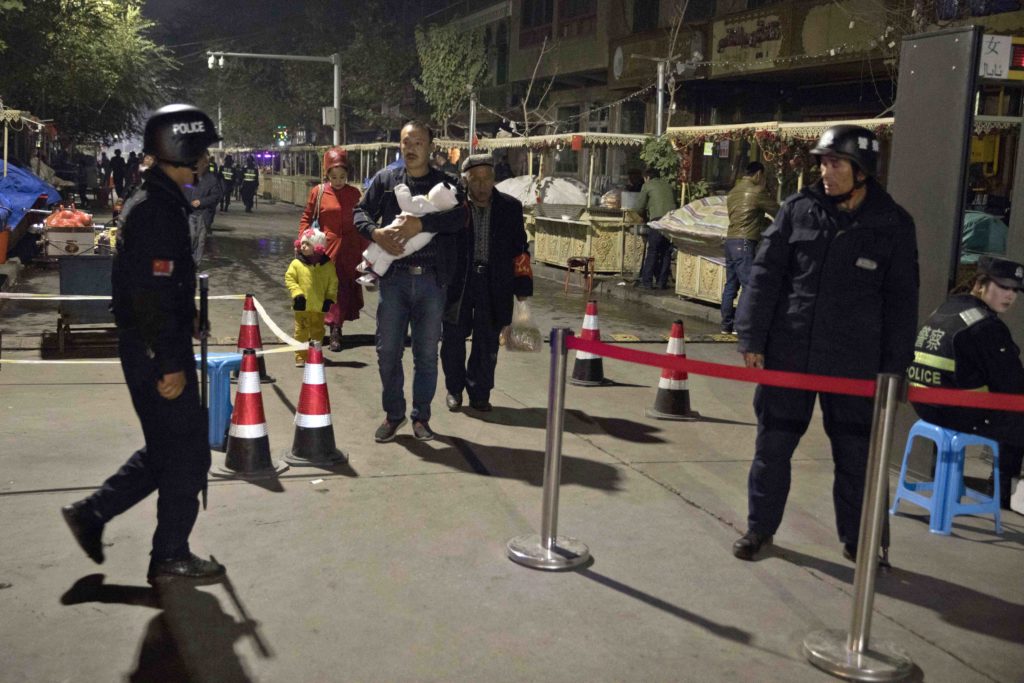 Residents walk past a security check point at the close of a open air market in Kashgar in western China's Xinjiang region in November 2017. (AP Photo/Ng Han Guan)

Tensions between Beijing and its Muslim minority in Xinjiang date to the region’s conquest by the Qing dynasty in the 18th century. Under the Communists, repression of Uighur Muslims and other religious minorities reached a crescendo during the Cultural Revolution, when mosques were closed religious leaders persecuted. In the 1980s, China began a relatively open policy towards Uighurs and the country’s 54 other ethnic minorities. Mosques were reopened and religious texts published.

Repression in Xinjiang returned with the collapse of the Soviet Union in 1991 and the emergence of independent Turkic states like Kazakhstan and Kyrgyzstan on China’s western border.  “These kinds of crackdowns on Islam and on the everyday expression of Uighur culture have really been going on and ratcheting up since the early 1990s,” says James Millward, a historian who researches the region at Georgetown University. “At the same time, the Chinese government has been ratcheting up its claims that the dangers of separatism and the dangers of Islamic extremism have been getting worse and worse.”

To be sure, China’s government has said that it is not arbitrarily detaining Uighurs, and has argued that it is trying to prevent international terrorism and the spread of radical ideology. It's also said that the "re-education" camps are effectively vocational schools meant to train people for jobs.

Indeed, repression has accelerated since a series of large-scale ethnic riots in 2009 Ürümqi, Xinjiang’s capital. The rioting, between Uighurs and the region’s growing Han Chinese population, left nearly 200 people dead and injured 1,000. 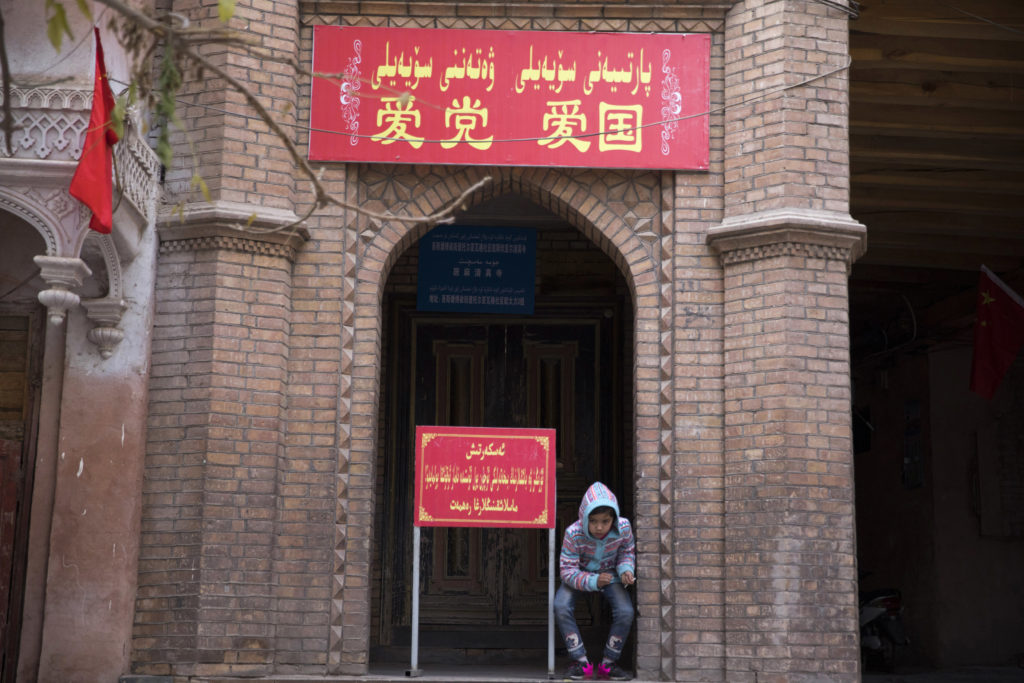 A child rests near the entrance to the mosque where a banner in red reads "Love the party, Love the country," in Kashgar in western China's Xinjiang region in November 2017. (AP Photo/Ng Han Guan)

However, under President Xi Jinping the central government has exaggerated the threat of terrorism by Uighurs in order to try to stamp out their religion and culture, analysts say.

“By showing the rest of China that the Uighurs pose a threat to the sovereignty and social stability of the country… that there is something almost inherently violent in Uighurs, then the Communist party looks seemingly justified in repressing these primal tendencies,” says Grose.

Despite its remoteness from coastal China’s population centers, Xinjiang is set to grow in strategic importance–a factor that may explain China’s long-term interest in assimilating Uighurs and other Muslim minorities. The region is a major transit point for President Xi’s Belt and Road Initiative, a $150 billion per year infrastructure initiative.

A key element of that plan is building road and rail links along the old Silk Road from Xinjiang through Central Asia to China’s key trading partners in the Middle East and Europe. Whether China can manage growing links with the outside world while at the same time carrying out a mass campaign of repression in an area that would be a hub for trade and investment under the scheme remains to be seen.

“China is caught in a dilemma between its security concerns and this new initiative that involves opening up, drawing linkages,” says Millward. “And Xinjiang and the Uighurs are caught in the middle.”