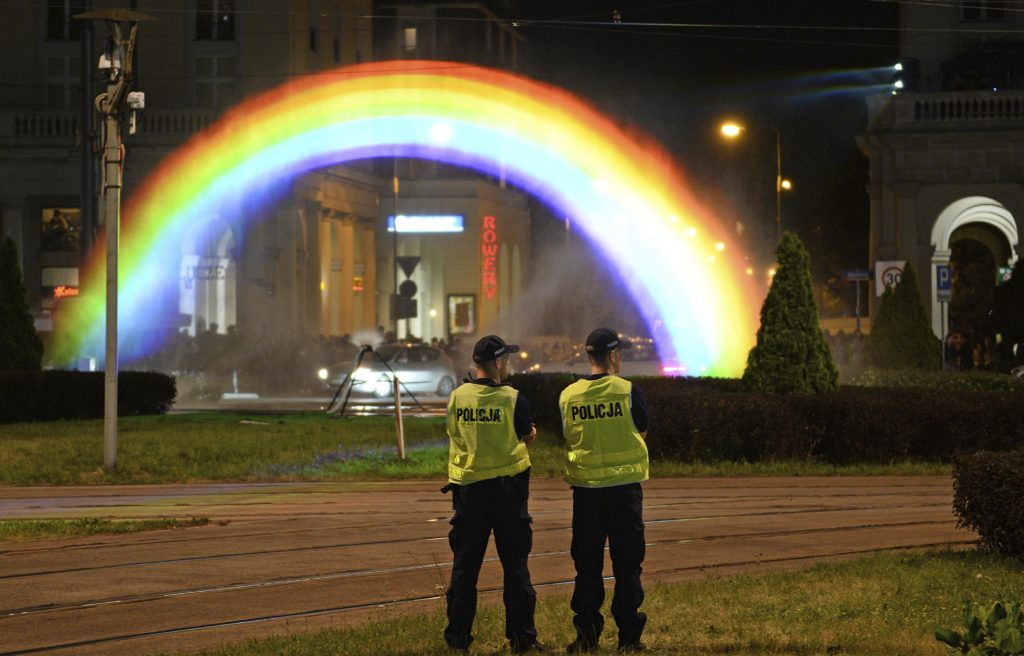 Police officers stand next to a light and water rainbow installation on the night before a gay pride parade in downtown Warsaw, June 8, 2018. (AP Photo/Alik Keplicz)

"It’s hard to work in an environment where you see the basis of democracy deteriorating."

Intended as a symbol of pride for Poland's lesbian, gay, bisexual and transsexual (LGBT) community - the holograph was also a reminder that an earlier rainbow monument made of artificial flowers in Warsaw had been burned and defaced so many times that it had to be replaced by something more difficult to vandalize.

Hate speech in the eastern European nation is on the rise, says Vyacheslav Melnyk, the executive director of the Campaign Against Homophobia, one of the country's largest gay rights groups. As in other former Soviet bloc nations, gay and lesbian Poles enjoy fewer rights and protections than their brethren in western Europe.

Polling by the Pew Research Center in 2015 and 2016 found that 47 percent of Poles said that homosexuality should not be accepted, and just 32 percent of those polled support same-sex marriage, which remains illegal in Poland. Earlier this year, a report from the International Gay, Lesbian, Bisexual, Trans and Intersex Association ranked Poland the second-most homophobic country in the EU, ahead of only Latvia.

While the heavily Catholic country has become more tolerant of LGBT people than in decades past, Melnyk says that tensions have risen since the right-wing, populist Law and Justice Party won control of Poland's presidency and lower house of parliament in 2015. Since taking power, Law and Justice has come under criticism from human rights groups for its harsh views on immigrants, its efforts to quell criticism in the media and a plan to pack the judiciary with political loyalists. 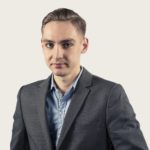 "Society is becoming more and more polarized," says Melnyk. "There are more segments that instead of building bridges, started to build walls. Since the last elections that kind of was the tipping point that we are able to identify. We see that the hate speech became more and more acceptable in the public space."

Melnyk's organization hasn't been immune. Both its offices and those of Lambda Warsaw, another gay rights group, have been defaced a number of times. Melnyk spoke with Global Journalist's Niki Braham about the challenges of advocating for LGBT rights in Poland. Below, an edited version of their interview:

Global Journalist: Why did you choose to become an advocate for LGBT rights?

Melnyk: Being a Ukrainian and moving to Poland for university, I started to notice inequalities in the social life. Migrants and the LGBTIQ community were unequally treated in the eyes of the law and society here in Poland... I decided to join the cause to where we, as a community, can be useful.

Global Journalist: What projects do you work on?

Melnyk: We are working on the four-year strategy. On the political [side], we are working 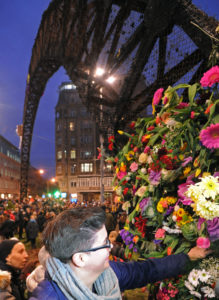 People place flowers on the remains of a rainbow structure burnt down by right-wing extremists, in Warsaw in 2013. (AP Photo/Alik Keplicz)

We are also focusing on healthcare and education. For example, in public schools we are encouraging an annual day where teachers that feel like LGBTIQ students should have a safe space in schools have the chance to voice their concerns, and also provide a safe space so student can come up and talk to them.

Also, we are doing a social campaign that promotes the idea of being an ally to LGBT people, so in that area we encourage public figures, figures of authority or celebrities to speak out. We conduct yearly academies of engaged parents where we gather the parents of LGBT people to come together and work together and become activist.

GJ: What are the biggest challenges your group faces?

Melnyk: Our biggest challenge is to work on the environment – that is becoming increasingly hostile. On one hand we have our role to play in building an inclusive and just Poland, but on the other hand we see that democracy is under threat with the courts and media being politicized. It’s hard to work in an environment where you see the basis of democracy deteriorating.

GJ: How has the LGBT community been affected by the Law and Justice Party  government?

Melnyk: It is very hard to not notice the changes in both the attitudes of the society in general and the political community...the changes that are visible are in terms of the legal system. Also the freedom of media has been of the concern to us as a civil society organization.

Generally the attitudes of society have changed a lot. We have noticed in our research that there has been an increase in hate crimes and hate speech; it has been more tolerated by the political elites. Also there were a number of attacks on civil society organizations previously and public media. Those things do not go unnoticed. We see that the community on one hand gets more mobilized because of the threats, but on the other hand it’s been a much harder environment to work in. 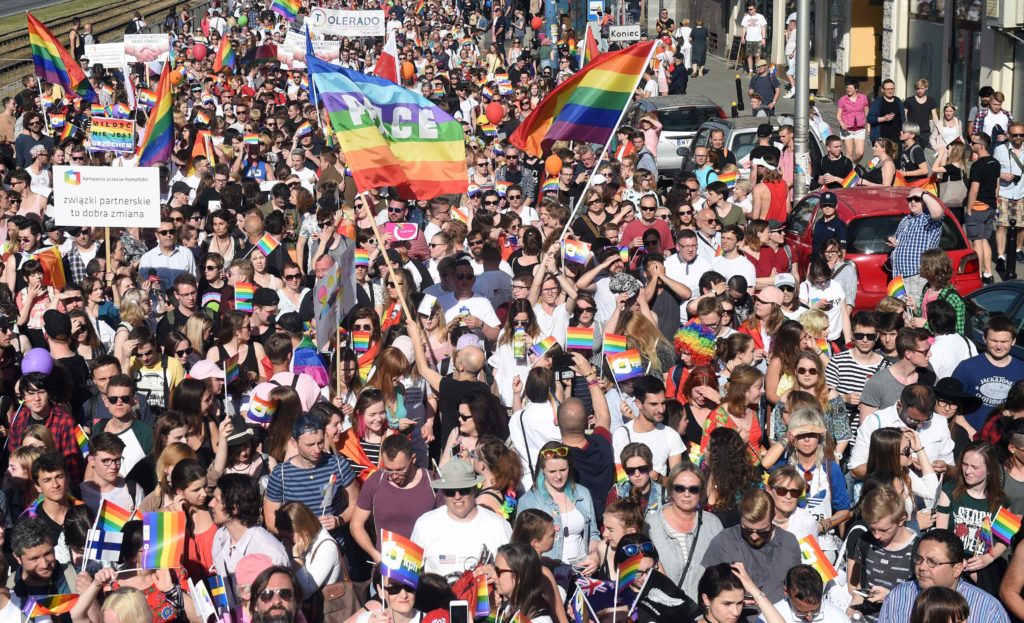 GJ: What has led to a rise in hate crimes?

Melnyk: I would say that generally society is becoming more and more polarized. There are more segments that instead of building bridges, started to build walls. Since the last elections that kind of was the tipping point that we are able to identify. We see that the hate speech became more and more acceptable in the public space, not only targeting the LGBTIQ community, but also migrants.

GJ: Are there specific examples that you would cite?

Melnyk: There are lot’s of stories that show how bad things are. We hear cases of people being beaten up on the street, pride marches getting obstructed by aggressive, right-wing groups. Things like this happen more often now.

A couple of years ago me and my boyfriend at that time were attacked on the street in Warsaw. It was in the middle of the night, it was on New Years Eve and the case was taken to the police and to the court, which is also a rare thing.

Only around 10 percent of homophobic hate crimes are reported to the police in Poland and the case has gone through the [Polish court system] and is now pending before the European Court of Human Rights. Poland does not recognize homophobic motives as a basis of hate crime, [so] we tried to have it recognized at the European level.