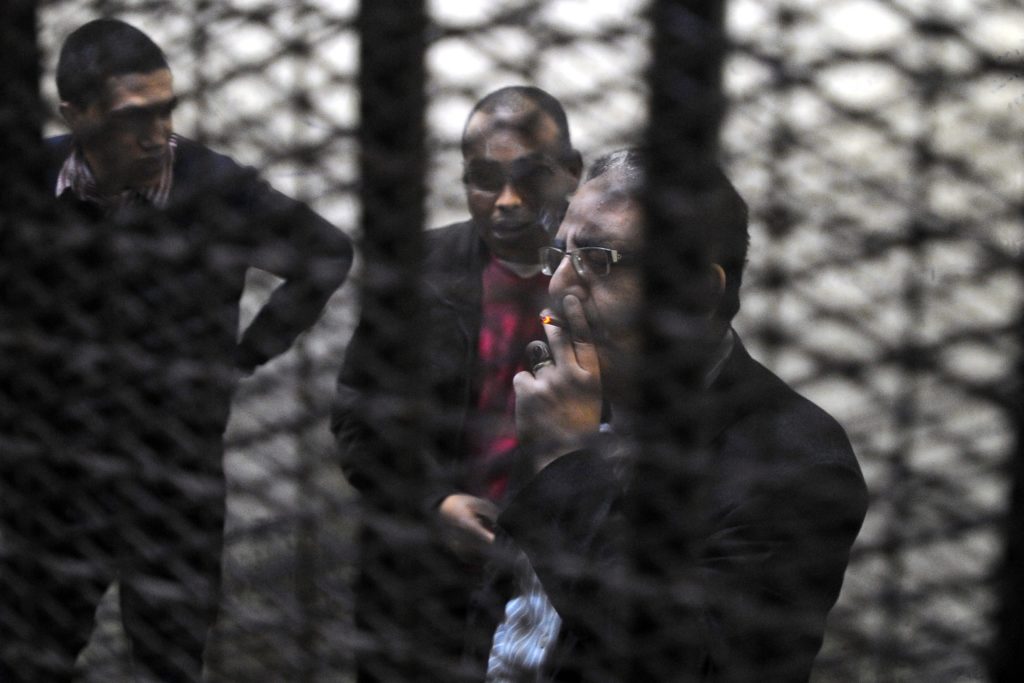 Egyptian defendant Yahya Ghanem (R) smokes a cigarette as he stands in the defendants cage during the first day of the trial of NGO workers accused of working for unlicensed organizations in Cairo, Feb. 26, 2012. (EPA/MOHAMED OMAR)

"We have to stand up for each other, otherwise the whole profession is in jeopardy.”

Yehia Ghanem had been near the pinnacle of Egyptian journalism. As a former foreign correspondent and senior editor at Al-Ahram newspaper, one of Egypt's largest and most influential media outlets, he had covered conflicts in Bosnia, Yemen and Afghanistan. 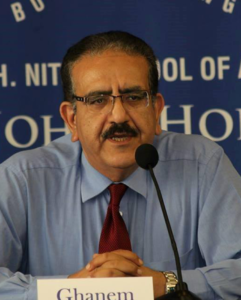 But in 2011 as the Arab Spring swept across Egypt and eventually ousted longtime President Hosni Mubarak, Ghanem agreed to open an office for the International Center for Journalists in Cairo to train reporters unused to the freedom and responsibility that came with working during a democratic transition.

Those efforts came to a screeching halt when he was summoned to appear before Egypt's Ministry of Justice. Days later, security forces loyal to the country's interim military government raided the ICFJ in December 2011, along with offices of a number of other U.S.-funded non-governmental organizations, including the International Republican Institute, Freedom House and the National Democratic Institute.

Ghanem, 54, and 42 others working for pro-democracy groups were charged with illegally receiving funds from the U.S. and of being part of a "Zionist plot" to divide Egypt. Even as many of his co-defendants fled the country, Ghanem stayed to fight in court for 21 months. Periodically, he was ordered inside a steel cage with other defendants  during hearings. As he later recounted, observers in the court's gallery sometimes chanted for him to be put to death.

"I had never felt that foreign in my whole life," says Ghanem, in an interview with Global Journalist. "Especially in my own country."

Just before sentencing in June 2013, Ghanem's lawyer finally persuaded him to leave the country as well. He eventually made his way to the U.S., where he did a fellowship at City University of New York in 2013 and 2014. Back in Egypt, the court sentenced him in absentia to two years of hard labor. While in New York, Egyptian security officials repeatedly raided his wife's home in Egypt, according to the International Center for Journalists, and he remains a fugitive.

Since then, Egypt's press freedom situation is little-improved under current President Abdel Fatah el-Sissi. As of December 2017, Egypt had 20 journalists in prison and the country ranked 161 out of 180 countries on Reporters Without Borders' 2018 World Press Freedom Index.

Ghanem, still living in the U.S., spoke with Global Journalist's Blythe Nebeker about his trial and exile. Below, an edited version of their interview. 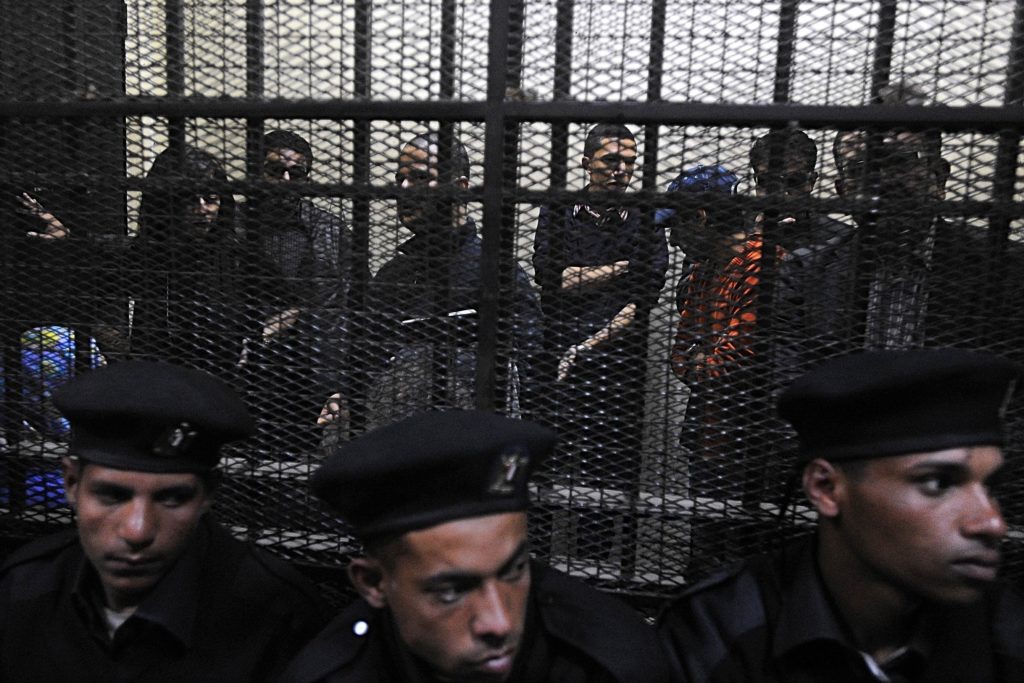 Ghanem (right, behind bars) and other defendants accused of working for unlicensed non-governmental organizations (NGOs) and receiving illegal foreign funds, standing in a cage during the opening of their trial, in Cairo, Egypt, Feb. 26, 2012. (EPA/MOHAMED OMAR)

Global Journalist: What was your experience at trial?

Ghanem: It lasted 21 months, almost two years of nonstop psychological torture. Long hours in this dirty cage like animals. We were all squeezed in. There were 14 other Egyptians from different organizations that I didn't know at the time.

[In the] first minutes when I was shoved into the cage by one of the police officers, it was really horrifying. I had never felt that foreign in my whole life...especially in my own country.

My cage mates were Egyptians except for one wonderful person, the only American [defendant] who insisted on attending the trial along with his colleagues, [former National Democratic Institute staffer] Robert Becker. I didn't know him at the time, but we came to be very, very close friends during the months of the trial. 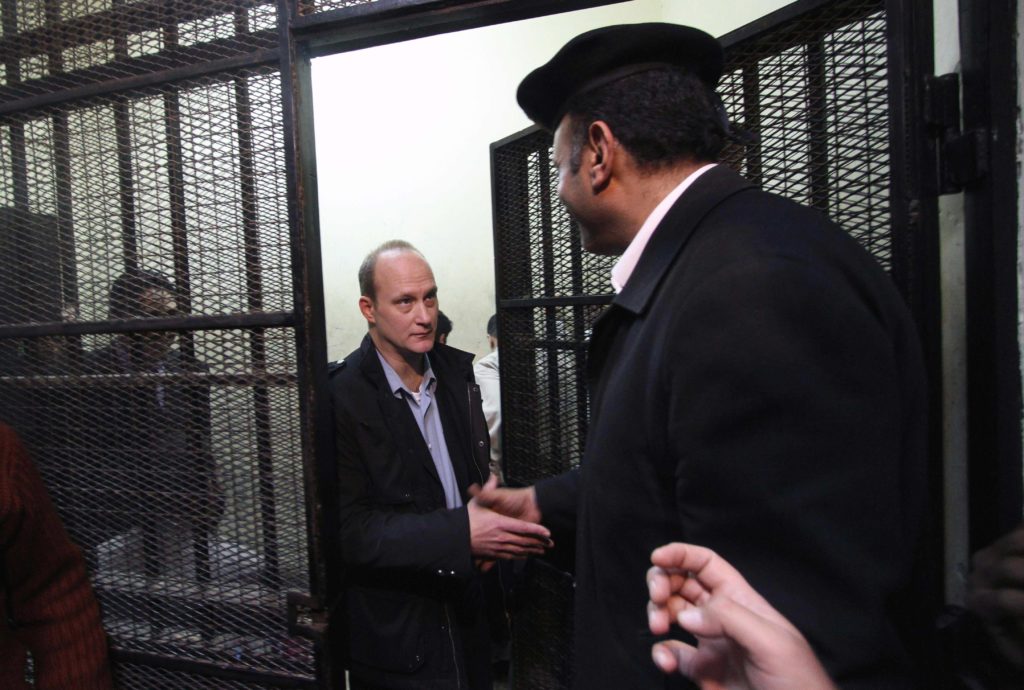 Ghanem's co-defendant American Robert Becker of the National Democratic Institute leaves the defendants' cage after a hearing in the trial of employees of nonprofit groups in Cairo, Egypt, March 8, 2012. (AP Photo )

GJ: How did you manage to leave?

Ghanem: I didn't know that [many of the people arrested] with me had already left. When I was told about that, I refused to leave. I had the agony of spending almost two years in the cage, so I'm not planning to escape. I am going to be there during the sentencing hearing [because] I hadn't done anything wrong.

I thought I had proven that in court with documents and a whole body of evidence. The [prosecutors] hadn't even produced a clue, not to mention evidence. Even their so-called evidence, witnesses, we cracked them and they backtracked their testimony before the investigative judge. In court, in cross-examination, they all backed off. So why should I be afraid?

The defense attorney along with ICFJ, they pressured me, saying: "It's not safe and you are going to be alone in the cage, leave, just in case."

So I left the day before I was sentenced. It was quite shocking. 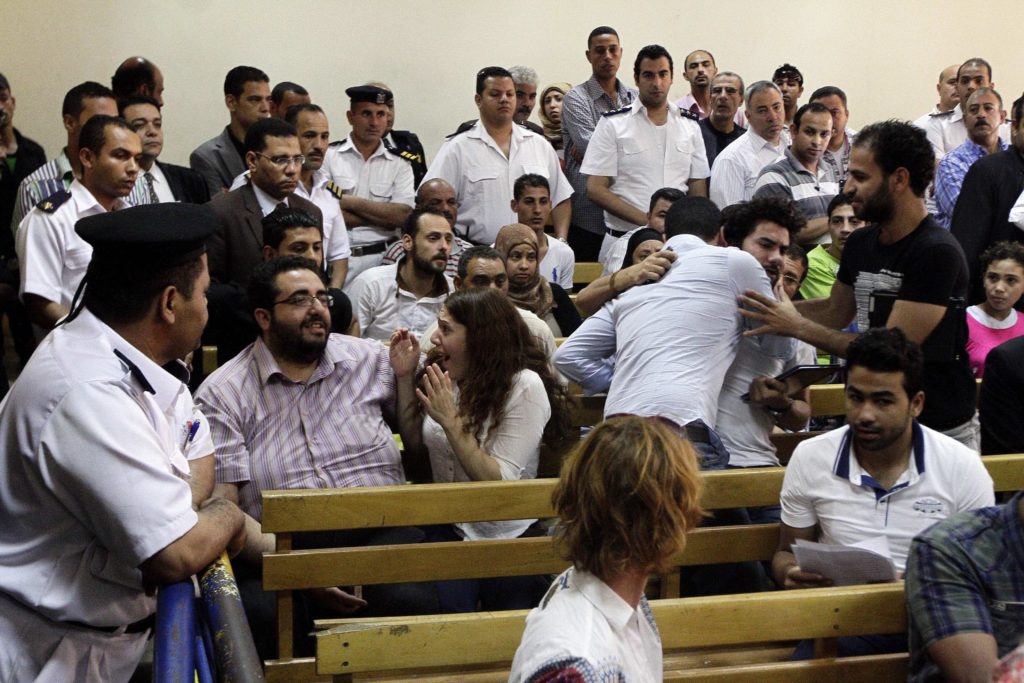 Colleagues and family members react to a court verdict convicting 43 nonprofit workers, including at least 16 Americans, of illegally using foreign funds to foment unrest in the country, sentencing them to up to five years in jail, in Cairo, Egypt, June 4, 2013. (AP Photo/Ahmed Abd El Latif, El-Shoruk Newspaper)

GJ: Where did you go?

Ghanem: I left to South Africa, where I'd lived seven years before as a bureau chief and I caught the next plane from Johannesburg to Washington. I was shocked with the [two-year] sentence.

It was really traumatizing at the beginning. I just wanted to go back home. I couldn't grasp the idea of having to live for the rest of my life away from home. There was no way to see my children, my wife, my mother. It was really shocking.

A few months later I took an offer from the City University of New York [for a one-year fellowship]. I was trying to get rid of this trauma. I was desperate and so my life narrowed down to going to the office in the morning, doing research, writing, and [teaching] some classes and leaving the office...at 11 p.m. [to] go back home to that little cramped hole in Manhattan. That's it.

GJ: What can be done about restrictions on press freedom in Egypt?

Ghanem: I have been through a horrible ordeal, but my heart breaks when I think about my colleagues who are languishing now [in prison]. The international community should stand up for those journalists. Also the international media, I don't believe that they have been providing enough exposure for those journalists who have given up their freedom and the comforts of life for the sake of telling the truth.

If fellow journalists do not stand up for each other, then I am afraid we are going to hang next to each other. It breaks my heart to see some fellow journalists enjoying their comforts, believing they are far away from threats. This is not true. We're all exposed to these kinds of threats. Wherever you are, in Europe, in the U.S., we have an obligation towards each other. We have to stand up for each other, otherwise the whole profession is in jeopardy.