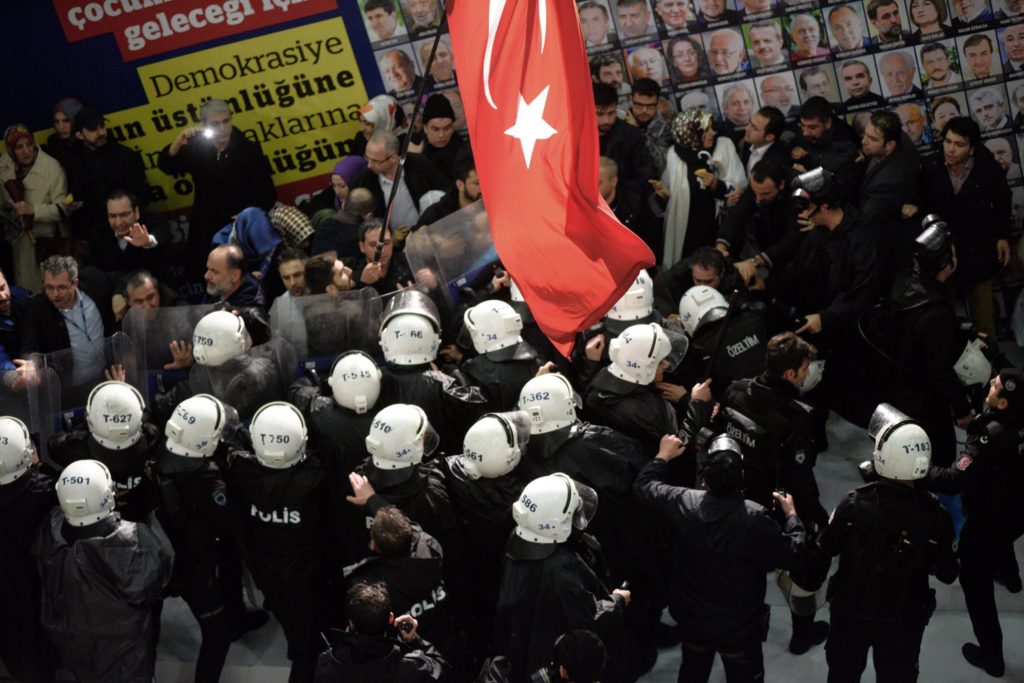 Turkish riot police enter the headquarters of Zaman newspaper in Istanbul after using teargas and water cannons against the people gathered outside in support or the publication, March 4, 2016. (AP Photo)

"I realize it was the best decision of my life because I would be imprisoned right now, like my colleagues."

Shortly after Turkish police in riot gear raided the headquarters of Zaman Media Group on March 4, 2016, Sevgi Akarçeşme saw that she had just two choices. 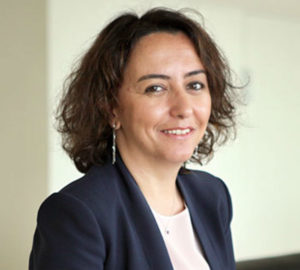 Or she could flee the country and try to speak out in exile. Less than 48 hours later, Akarcesme was boarding a plane for Brussels to escape impending imprisonment.

"I didn't want to turn into a pro-government journalist and lost my integrity," she says, in an interview with Global Journalist. "I lost everything else, but not my integrity."

The government seizure of Zaman Group, a media company sympathetic to the Hizmet opposition movement led by exiled cleric Fetullah Gülen, presaged a far-reaching crackdown on media, civil society and others following a failed coup against Erdoğan two months later. In all of 2016, Turkey detained more than 140 journalists and hundreds more lost their jobs, according to a U.S. State Department human rights report. Nearly 4,000 people were indicted for insulting the president, the prime minister or state institutions. According to the Committee to Protect Journalists, Turkey had 73 journalists in prison in December 2017 – the most of any country in the world.

Indeed even as Akarcesme was leaving the country, Erdoğan's administration had already transformed the Turkish edition of Zaman into a pro-government mouthpiece.

Yet even before the storming of Zaman's offices, Akarçeşme had faced legal pressure from the government. In early 2015, she was put on trial for "insulting"  then-prime minister Ahmet Davutoğlu in a tweet in which she accused Davutoğlu of covering up a corruption scandal involving family members of senior officials.

But it wasn't until the closure of Zaman in 2016 that it became clear that Erdogan's government would no longer tolerate independent media. Even after Akarçeşme left for Belgium, the Turkish government continued to take punitive measures against her, raiding her apartment in Istanbul and canceling her passport. Akarçeşme, now 39, spent more than a year in Belgium before coming to the U.S. in May 2017.

Now living in the U.S., where she works as a freelance journalist and is looking for a full-time job, she spoke with Global Journalist's Lily Cusack about her exile. 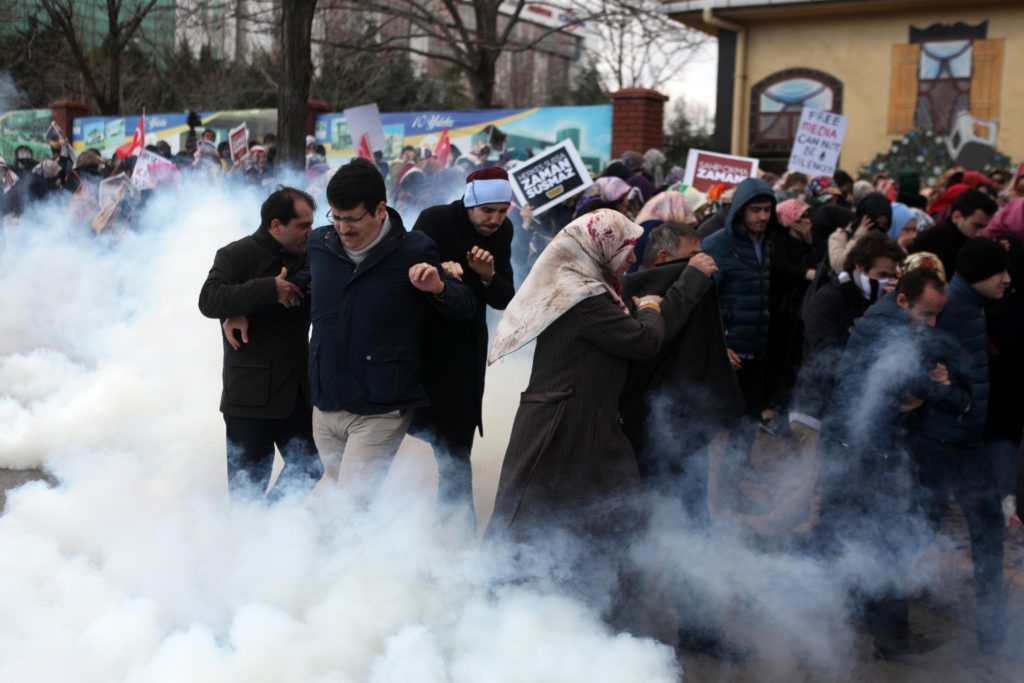 People run as riot police use tear gas and water cannons to disperse people gathered in support outside the headquarters of Zaman newspaper in Istanbul, March 5, 2016. (AP Photo)

Global Journalist:  How did you end up leaving Turkey?

Akarçeşme: As you can imagine, it’s a long story because Turkey did not become a dictatorship overnight. So like everything else, it was a process. It was a fast process, but still a process.

It was March 6, 2016 [when] I left Istanbul suddenly. Two days before my departure, the government led by Erdogan seized our newspaper over charges, of course ridiculous charges, of terrorism and terrorist support. And because I was the leading executive of the English daily, Today's Zaman, I knew that it was a matter of time for them to persecute me as well.

Four months before that, in December 2015, I received a suspended prison [sentence] because of my tweets. Actually, not even my own tweets. It was some comments left under my tweet. The prime minister at the time sued me, and I received suspended imprisonment.

So there was already ongoing oppression, and I knew that Turkey has never had a proud record of freedom in terms of journalism. But it was getting worse and worse, and the government primarily targeted our media group. It was almost evident that it would be a matter of time.

It was a difficult decision to leave your country with only two bags...suddenly, without notifying anyone because you might be stopped at the border. So many people were banned from traveling abroad. So I was nervous about being banned from traveling abroad, but fortunately, I was able to leave. In retrospect, I realize it was the best decision of my life because I would be imprisoned right now, like my colleagues. 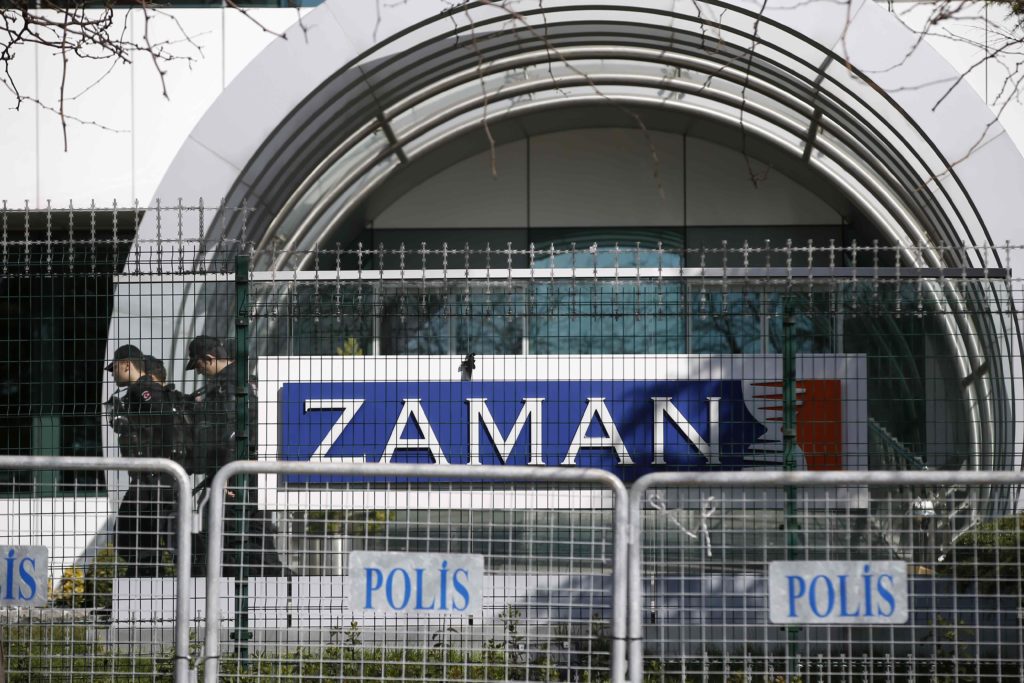 Riot police officers walk by the headquarters of Zaman newspaper in Istanbul, March 6, 2016, two days after it was seized by the government. (AP Photo/Emrah Gurel)

GJ: Did you personally receive threats?

Akarçeşme: Over social media, yes I did, just like my colleagues....I quit tweeting in Turkish, I only tweet in English from time to time. Any critic could tell you that an army of trolls target and harass you.

GJ:  How did you reach the conclusion that you had to leave?

Akarçeşme: It was a very sudden decision. In the two days from the police raid [March 4, 2016] until I left, I only talked to [Abdulhamit Bilici], editor-in-chief of the larger media group. He was also dismissed, and he was also at risk. But he did not want to leave immediately. He thought that he needed to stay to support junior level people. But I just thought that in the case of an arrest, I could not stand the conditions of prison in Turkey. I told myself that I had to leave.

So I was very nervous at the airport because I didn't know whether my passport was cancelled. It was a memorable moment. I just remember walking across customs and passport check and feeling extremely nervous. It was funny because I was only a journalist. I knew that I did nothing wrong, but I knew that wasn't enough to save me from a possible persecution or prevent my departure. I was relieved [when] we landed in Brussels.

In July, when I left Belgium and was on may to the U.S., I was taken off the plane because I was told that my passport was not valid. So it actually happened, but fortunately it happened after I left Turkey. 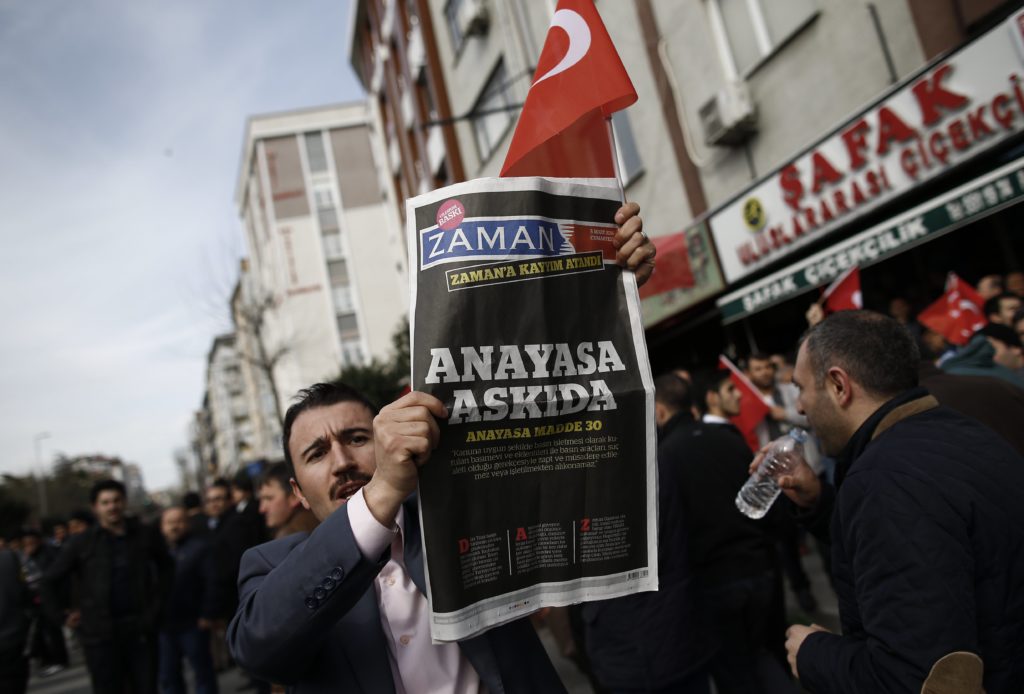 A man holds a copy of Zaman newspaper with a headline that reads, "The Constitution Suspended," on March 6, 2016, two days after the paper's offices were seized by the government. (AP Photo/Emrah Gurel)

GJ: How did it feel having to leave Turkey so suddenly?

Akarçeşme: It was a terribly uneasy feeling. You kind of become alienated from your own country. The day I decided to leave, I already felt that Turkey was a hopeless case and there was no future for me in Turkey.

Over the last two years, I have been extremely disillusioned [about] my home country and my home society because [people] have been predominantly remaining silent in the face of oppression. They have even been supporting Erdogan.

So I feel that it's not home anymore, even though I still have loved ones [there]. My heart and mind is still with all these prisoners, especially purge victims, tens of thousands of people, not only journalists, people from all walks of life.

GJ: Do you have hope of returning?

Akarçeşme: I have no hope. It will not improve. The government has been seizing more and more media outlets everyday. There is no free media... except a couple of web-based TV [channels] and newspapers from exile, there’s nothing mainstream left for independent journalism. The whole narrative is being controlled by the government. So unfortunately I’m very pessimistic. I see no way out in the short-run.