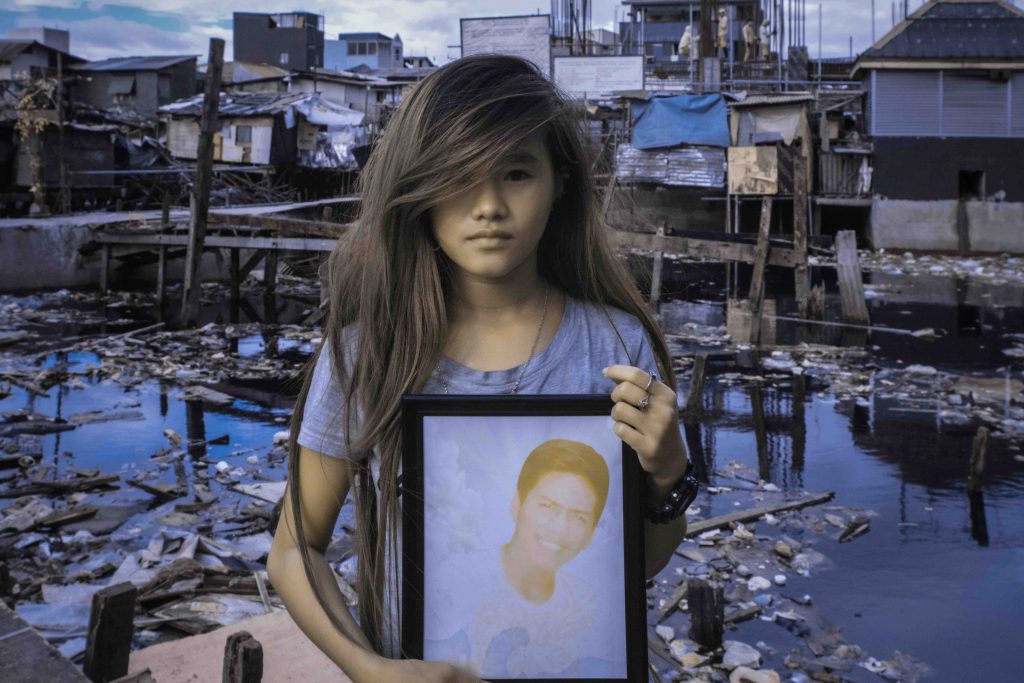 Jazmine Durabia, 15, holds a picture of her 16-year-old partner, who was killed in front of their house.

"The brutality of the drug war is beyond any human witnessing..."

New York-based photographer Lawrence Sumulong has a strong connection to the Philippines. 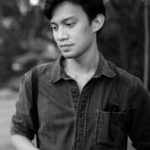 The son of a Filipino dissident blacklisted by the Marcos dictatorship in the 1980s, Sumulong has made a career mixing commercial photo projects for clients like the British Film Institute and Jazz at Lincoln Center with photojournalism projects in the Philippines.

Recently Sumulong traveled to the Philippines last year to try to capture the trauma of President Rodrigo Duterte's war on drug users and drug dealers. Since Duterte took office, that war has claimed the lives of at least 12,000 people, many of them urban poor who have been killed by uniformed police or vigilante squads in cold blood.

"It was a...subdued and pervasive sense of terror and melancholy," he says of the feeling in Manila, in an interview with Global Journalist. "The most shocking part is the normalcy of it, how everything has become regular."

The result was his "Manila Gothic" series of photographs of the family and friends of victims and parts of the city worst-hit by the outbreak of extrajudicial killings under Duterte. As part of that effort, Sumulong tried to shoot forensic-style photos that give the city the feel of a crime scene. To capture the emotional toll on the survivors, he asked subjects to write letters both to God and to the person they had lost.

The 31-year-old photographer spoke with Global Journalist's Teodora Agarici about the project. Below, an edited version of their interview: 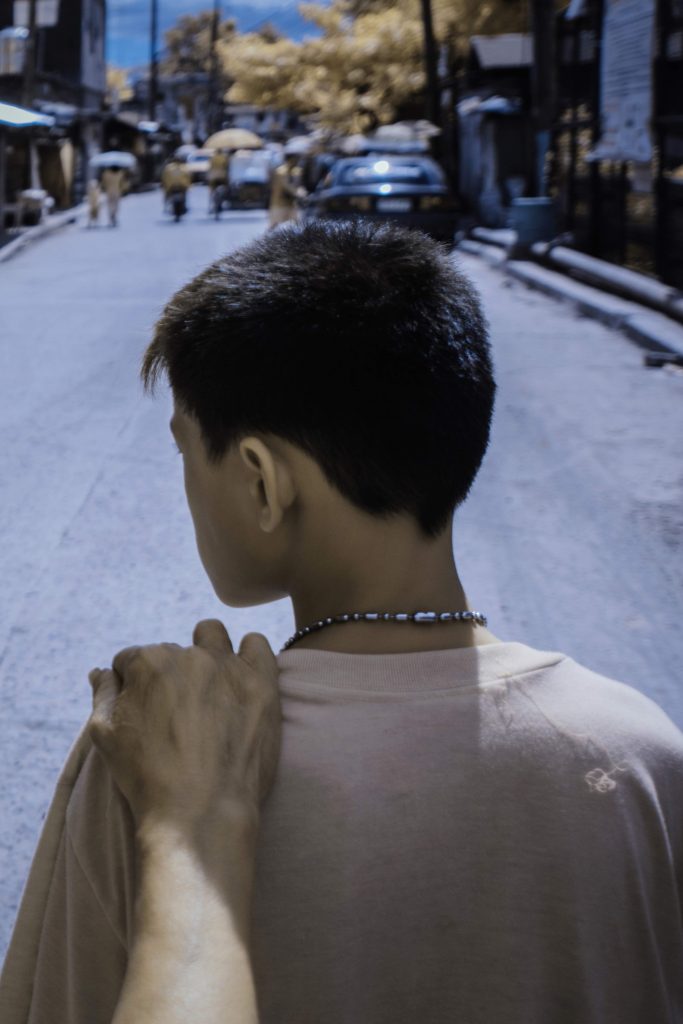 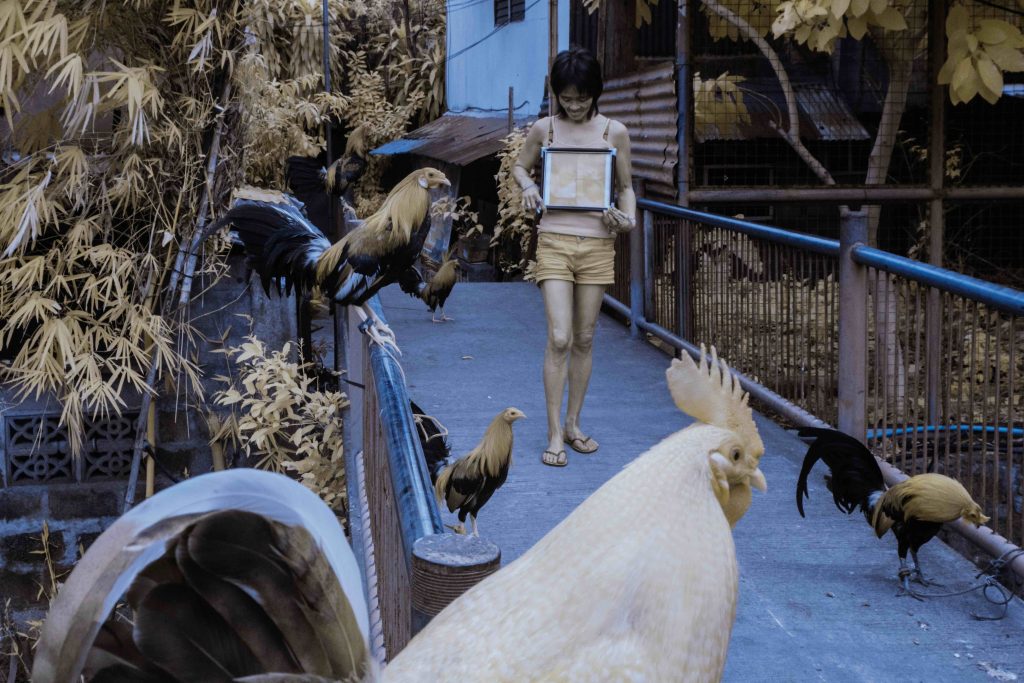 Cristiana Torres, 37, in Pasay City, holding a picture of her slain son. 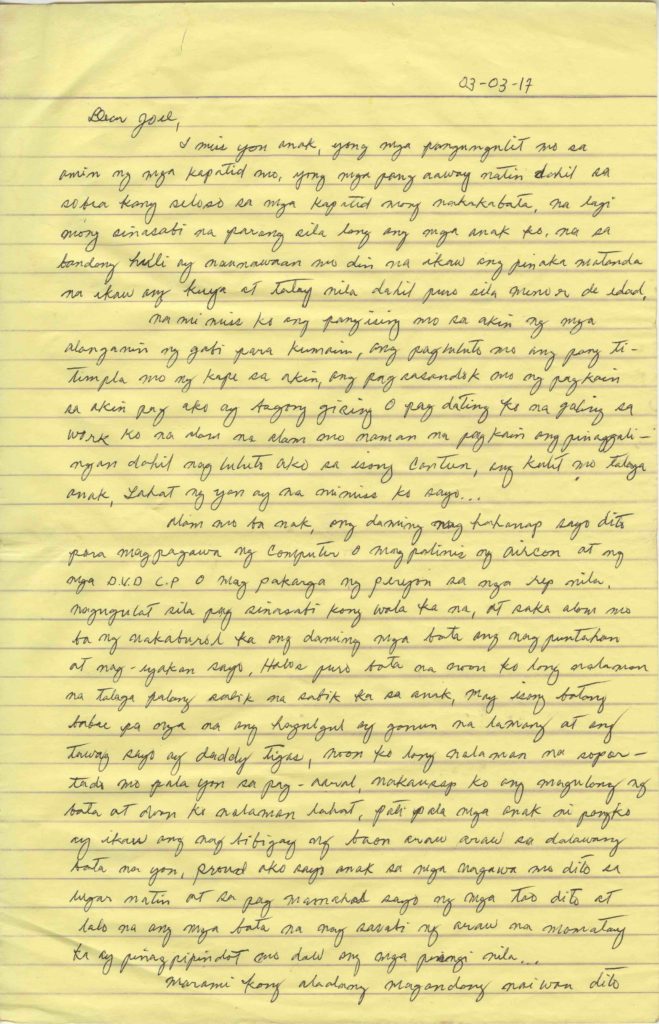 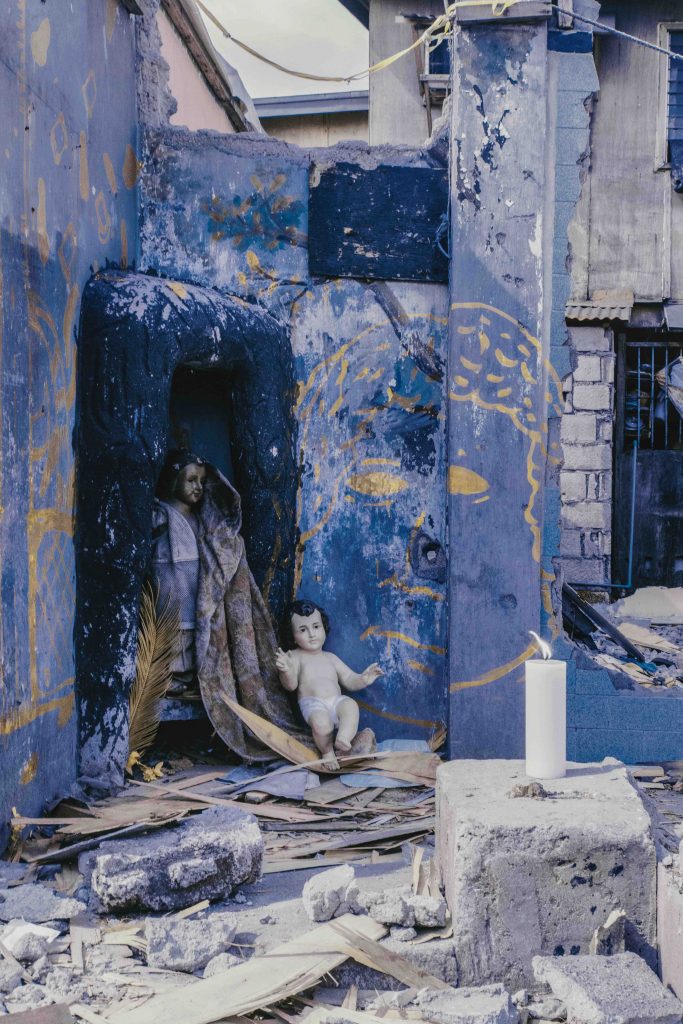 Installation art in Manila near where a 16-year-old boy was killed.

Global Journalist: Where did the name of the project, "Manila Gothic," come from?

Sumulong: I was influenced by the work of a Filipino writer, Nick Joaquin, and his series of short stories called Tropical Gothic. I was quite familiar with Gothic literature which involves these supernatural, uncanny events, the sublime and certain types of morbidity. I combined this with my experiences being in Manila.

I wasn’t dealing with Manila as a city, but as a character. The way that I was shooting it with a forensic camera gave a type of duotone that isn't natural – or it's not a spectrum of light that human beings can see through their eyes. And so the mixture of the place, the subject matter and the way I was approaching it seemed to fit in with what I've read before. It was a way to encapsulate these two themes I was dealing with.

GJ: What was the most difficult part of the series?

Sumulong: My experience was different from the photojournalists now. I hear stories of photographers who go out and cover six or seven dead bodies, they arrive at a massacre. I wasn't going to the crime scenes.

I was revisiting men, women, children and families who lost their loved ones. I wasn't necessarily looking at new victims. It was the difficulty of revisiting someone who has been photographed, who has been in the news and who has, more importantly, lost someone very dear to them in probably the most brutal ways I've ever encountered.

I was somehow journalist, documentarian, partly artist. Firstly, I had to understand what happened because I wasn’t seeing a dead body; I wasn’t rushing to a scene where I would see people on the ground. I had to work to get an oral history from someone, which was tremendously difficult to recollect, especially because I was working on Manila Gothic six months after the start of the drug war.

Jazmine Durabia, 15, holds a picture of her 16-year-old partner, who was killed in front of their house. 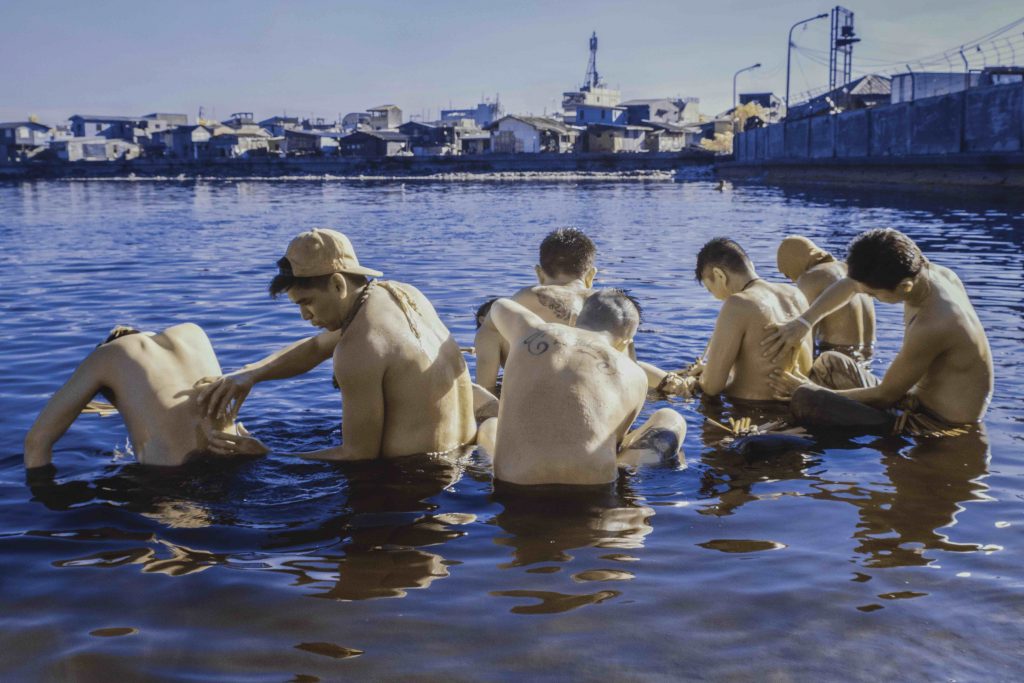 Flagellants wash their wounds in a polluted river in Tondo, Manila on Good Friday. 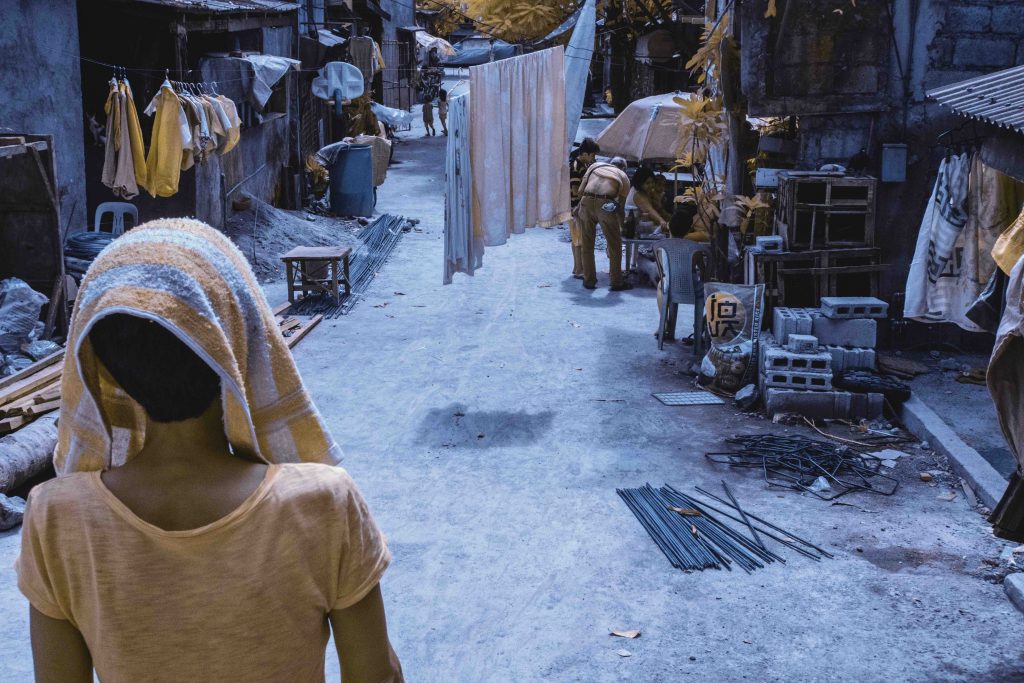 Irma Locasia, 61, near the site where her son was killed by masked men in Quezon City.

GJ: How did you get Filipinos to open up to you?

Sumulong: I simply asked them to write two letters. One to God, because it's a very religious country, predominantly Roman Catholic. In this letter, they could reflect to an unseen force or to whatever their spiritual belief was. The other letter was more direct, dedicated to the loved ones they lost.

I think it was not only therapeutic in some parts, but also cathartic. This sort of experience of giving a physical piece of paper to someone, and trusting them without any pressure of writing in a certain way was an idea of tackling that trauma on their own.

For someone to read a letter like this, it adds complexity and a layer feeling to the story.  When you see a picture and then you see the handwritten letter, it allows a type of sound bite that's closer to the human experience. I don't think they were expecting me to ask them to write a letter and it was a very touching experience because it was a process of mutual trust, giving them a few days to write and afterwards checking on them.

GJ: What is your most striking memory from this project?

Sumulong: I was working with another street artist and we would usually go to these spaces where there would be murders. The houses were on stilts, there was stagnant water, everything around was demolished except for the house of the victim – Jasmine.

She was 15 at that time and her partner was maybe 16. He was dragged out of her house and shot on the doorstep. I remember taking photos of Jazmine in that area, moving around dilapidated buildings. In my mind at least, for that grisly murder to happen in a landscape where everything was falling apart, was apocalyptic.

Afterwards, I started working with the street artist to create a physical space which you could explore as a representation of the atmosphere of fear that I saw enveloping Manila and still continues.

GJ: What impact do you hope this project will have?

Sumulong: The brutality of the drug war is beyond any human witnessing; something that I'm still trying to comprehend and I'll probably return to continue to photograph and try to understand it.

I didn't feel like I needed to repeat anything that other photographers are doing in terms of telling you the story from one angle or shooting for newspapers. It’s important not to simply read things as news, but go beyond reporting.

My reasoning was to give a different take on a cultural phenomenon, a historical moment that we’ll look back [on].

I'm trying to raise awareness in a way that you perhaps revisit the drug war and start to see some of the details that you might have missed, or you get to essentially connect to the person or the experience of loss that you're seeing.