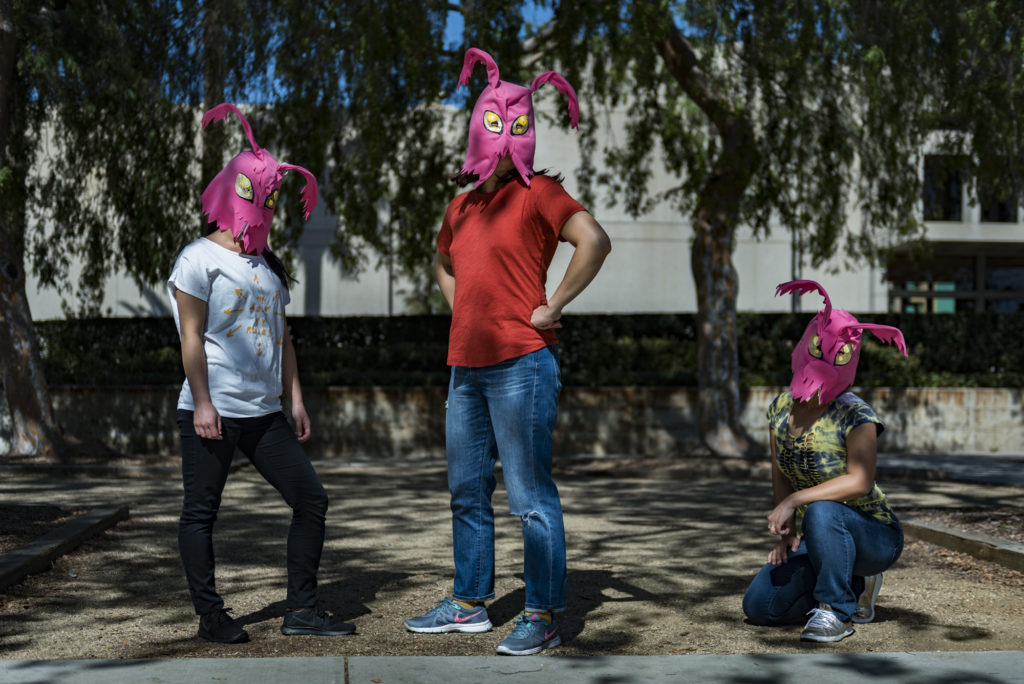 Members of Japan's feminist Tomorrow Girls Troop wear masks of characters that are a hybrid of the rabbit and the silkworm. "The silkworm is a symbol of women's labor in Asia," says Midori Ozaki, a founder of the group. "Rabbits are often associated with women and are portrayed as cute, weak creatures. Urban legend says that they can die of loneliness. We wanted to change this idea and breathe a new life into the image of a rabbit – as one who is independent, and does not try to please everyone."

"We have constant backlash from the public, so a lot of our members don’t want to reveal their names."

Japan may be known for its bullet trains, its high-tech manufacturing prowess and a population with one of the longest life expectancies in the world. But despite its modernity there's one area where Japan lags behind other developed economies: gender equity.

The country ranked 114th of 144 countries in 2017 on the World Economic Forum's Global Gender Gap report, a measure of economic, health and political equity. That's the lowest of any major industrialized country save South Korea. 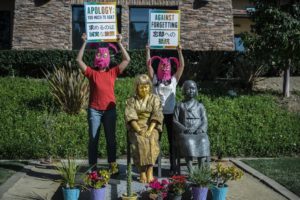 One group trying to improve the status of both Japanese and Korean women is the art collective Tomorrow Girls Troop. The organization has staged protests to pressure Japan's parliament to update the country's 100-year-old rape law, to protest the country's tolerance of sexual violence – and even to persuade the publishers the most authoritative Japanese dictionary to update the definitions of the works "feminism" and "feminist." Other campaigns have included efforts to change laws requiring women to take their husband's surnames and to highlight poverty among single mothers.

Yet its a measure of how much work remains to be done that members of the group feel the need to don giant rabbit masks when protesting in public. In part this is a nod to the Guerrilla Girls, a group of U.S. women who protested sexism in New York's art world in the 1980s by donning gorilla masks. Wearing masks is also meant to hide the identities of the group's members, many of whom fear being targeted for harassment. In addition, they believe that wearing masks and being anonymous keeps the focus on the group's message rather than their physical appearances, says Midori Ozaki, one of the group's founding members.

Ozaki spoke with Global Journalist's Magdaline Duncan about the uphill struggle for gender equity in Japan. Below, an edited version of their conversation:

Global Journalist: How did Tomorrow Girls Troop get started?

Ozaki: We started in 2015 because I noticed that there were not many feminist artists in Japan. We don’t learn feminism in school. Japanese women actually reject feminism because they’ve heard it’s a bad thing for them.

Since I went to school in New York City, I learned feminism and all my friends are feminist artists, so it made me really wonder about the situation. I found lots of other people who feel the same, so we decided to make a group.

Some of our founding members are Korean. They have a similar experience –  it’s not exactly the same as the Japanese situation because in Korea they have many more young Korean feminist groups already, while in Japan we don’t see much. 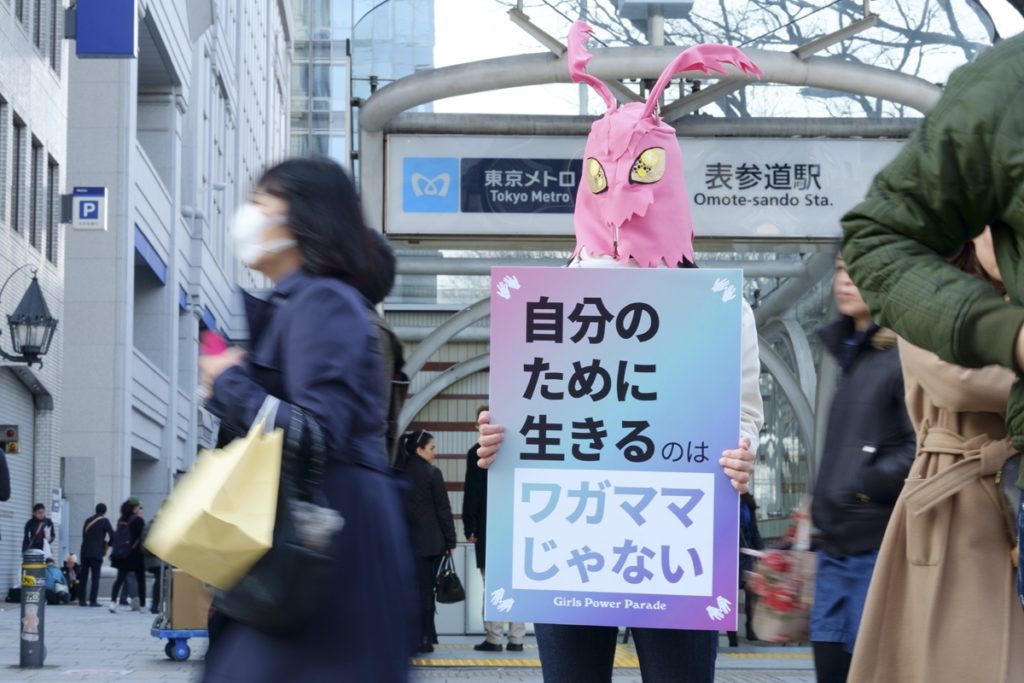 Ozaki, with a sign in Tokyo that says: "Living for yourself is not being stubborn."

What we noticed was Japanese misogyny and Korean misogyny are very similar and also Japan and Korea both have power to influence other Asian countries, like in pop culture.

Usually, Japanese and Korean dramas can be really misogynistic, too, and we found a lot of other friends from China or Taiwan or Cambodia that grew up watching Japanese drama or Korean dramas, so we felt like it was very important for us to take some responsibility to stop spreading the misogynistic culture that usually appears in art, like dramas or music.

GJ: What's it like to be part of a feminist group in Japan?

Ozaki: It’s a very difficult position. We have constant backlash from the public, so a lot of our members don’t want to reveal their names. Also, because Japanese feminists are struggling with the backlash, they don’t have enough energy to make a big movement.

If you are getting backlash on an everyday basis, no one funds you because no one really supports feminism.

Lots of people have to keep their position in Tomorrow Girls Troop a secret because they still need a job and they are frightened of being fired because they are a feminist. It’s a really bad situation.

GJ: What are the challenges to performing or hosting exhibitions?

Ozaki: It’s very difficult because whenever we do something on the street, there’s always Japanese men – young or old – who attend it to basically attack us. We haven’t had a good idea to prevent that yet. So, no matter what we do, there’s always guys who show up to put us down. So I’ve had guys tell me: “I don’t believe in equality,” or “Equality is impossible, why would you even do this?” or “Feminism is fascism.”

There was one day that we just felt really scared to go home because there was one really young Japanese guy who came to our show and he just tried to argue with us, and he didn’t let us go and we had to talk to him for more than 20 minutes...just like nonsense arguments about how equality is impossible. It’s really not easy and we really feel threatened sometimes.

We are also artists. Japanese society doesn’t really appreciate artists. So everybody basically looks down on us, as if we are not educated or we are not smart because a lot of people believe that artists are not smart and just love drawing. Also in Japanese society older people get more respect than younger people. We are young, feminist artists, so we’re a very easy target. 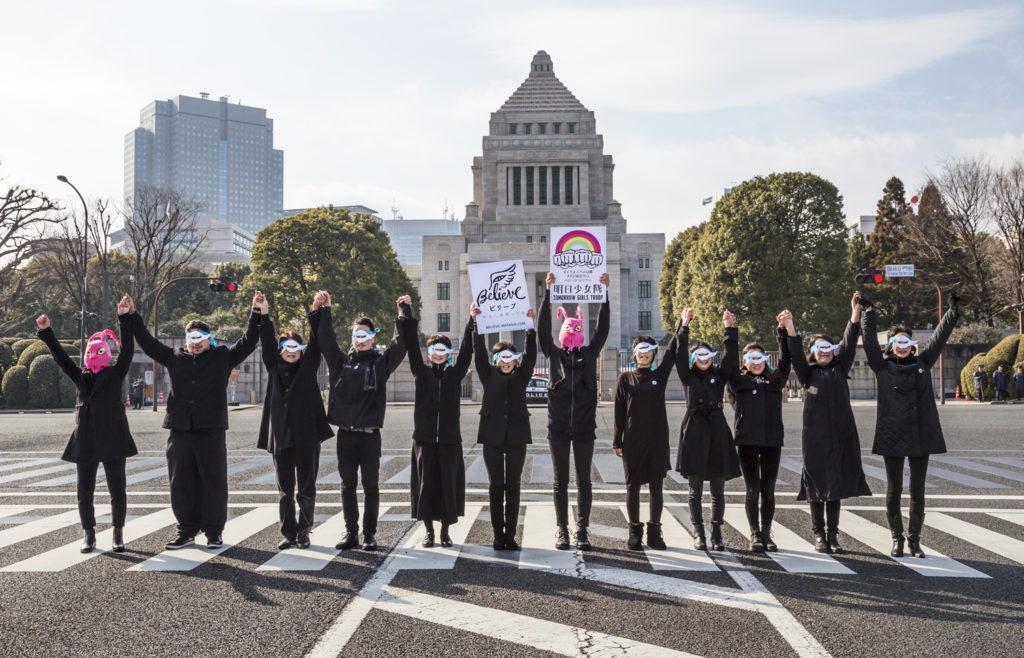 Members of Tomorrow Girls Troop rally in support of a bill to update Japan's sexual crimes laws in 2017. (Courtesy)

GJ: Is the concept of sexual assault different in Japan than in the United States?

They are underaged girls who are victims in a public space. No one helps them, and no one wants to talk about it and the police don’t do anything about it. There are some companies [that] have made women’s only train cars, but it’s not really working...Groping is so common in Japan. I have had a lot of experiences too. The groping – society has made women feel that it’s normal.