To compete, Pakistani squash pro disguised herself as a boy 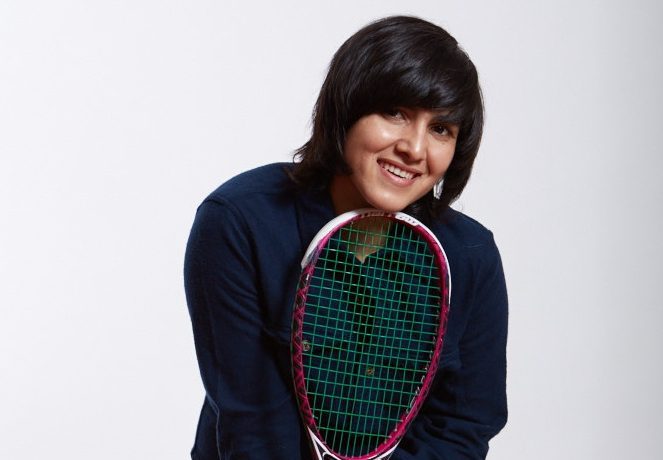 When Maria Toorpakai began her athletics career, she used not only a different name – but a different gender.

That's because Toorpakai is from Pakistan's Waziristan region, a tribal area on the border of Afghanistan. As a girl, she was not allowed to go to school with her brothers or play sports.

Her father, one of the tribal elders in the region, practiced a more moderate form of Islam than many of the family's neighbors. He believed in educating his daughters, and moved the family to the nearby city of Peshawar after threats. There he enrolled his daughter, who as a young child eschewed feminine toys and preferred aggressive play, in competitive weightlifting. Disguised as a boy and competing under the name Genghis Khan, by age 12 Toorpakai was ranked No. 2 in Pakistan in her weightlifting division. Toorpakai is pictured winning her first squash trophy at age 12, disguised as a boy and playing under the name Genghis Khan (courtesy).

That year she became interested in squash. But when "Genghis Khan" tried to enroll in a squash training academy in Peshawar, she was required to provide a birth certificate. Revealed as a girl, the academy allowed her to play and she turned pro in 2006 at age 15. But Toorpakai soon began receiving death threats from the Taliban. She stopped formal training, and for three years practiced only by hitting a ball against her bedroom wall.

After sending hundreds of emails to international squash academies in hopes of escaping Pakistan, she was offered a spot in 2011 to train with Jonathan Power, a former world No. 1 ranked player. By 2012, the Canadian-trained Toorpakai had become Pakistan's top-ranked women's squash player.

Now 27 and living in Toronto, she's ranked No. 122 on the Professional Squash Association women's circuit. Today Toorpakai sees sports as not only a competition but a way to promote peace and gender equity in countries like Pakistan. Through her foundation, she's funded a woman's health clinic in Pakistan near the Afghan border and is organizing an India-Pakistan squash tournament next month on the country's tense border in an effort to ease relations.

Toorpakai spoke with Global Journalist's Lily Cusack about her unusual path to professional athletics. Below, an edited version of their interview: Global Journalist: Why did you first start playing sports disguised as a boy?

Toorpakai: I grew up like the boys. When I was four and a half, I decided to burn all my girly clothes. I started wearing my brother’s clothes. I was able to pretend like I was a boy. My name was Genghis Khan, and I was able to enjoy the freedom that boys were enjoying. Girls did not have those kinds of opportunities or freedom.

Luckily I’m very blessed that my father introduced me to sports, and I think that was the best thing that happened in my life.

The whole credit goes to my dad for sure because when we have fathers like this behind girls in Pakistan, and especially in the Muslim world, I think they can be really strong and we can change the world for sure.

GJ: How did you become a squash player and why did you have to stop pretending to be a boy?

Toorpakai: I started sports with weightlifting, yet I was still pretending to be a boy because it wasn't really easy to be a girl...So when I started weightlifting, I got a position in the National Boys Championship under the name of Genghis Khan, but then I came back to Peshawar and fell in love with squash.

A few months later, I had to present my birth certificate to the academy where I had started playing squash. And that way the news started coming out and people started to know about me, that I'm a girl. So it kind of became uncomfortable because I was the only girl playing squash, and, in fact, you don’t see girls playing sports. I was the only one amongst 300 to 400 boys. GJ: Why did you decide to leave Pakistan for Canada?

This is the area where girls are not even allowed to go to school, and I’m playing squash in shorts and skirts and performing really well, winning tournaments. So then the Prime Minister of Pakistan gave me an award. I was recognized on an international level… So then it kind of started to become big.

That was when it started getting kind of tough in 2007 with the Taliban and the militants saying, 'You are coming from the tribal areas from our village, and you’re playing sports in shorts and skirts? This is unacceptable. This is un-Islamic.'

They were also telling my dad, “You are from tribal areas, and you come from a very respectable family, and the fact you’re doing these kinds of things, this is not acceptable.”

I couldn’t play squash with peace of mind. It was a danger not only to myself, but at the same time for other kids. I didn’t want to be the reason for their deaths. So I had to choose whether I wanted to stay home, whether I wanted to leave the country, what should I do? Even though Pakistan’s government, the Pakistani Air Force, they gave me undercover security with snipers on the squash court...I stopped playing.

GJ: You're planning a squash tournament near the contested border of India and Pakistan. How do you think sports can improve diplomatic relations between countries?

I’m always happy to help the athletes, whether in North Korea, whether in Iraq, in Afghanistan, India, Syria, Iran or Saudi Arabia. I’m happy to help them with squash, with different sports. They need to come out of those kinds of restrictions. They’re [rooted in] unnecessary egos, unnecessary hate. I don't think there is any space for that. We need to respect each other.