When Paul Harris entered a newspaper cartooning competition in Guyana in 1983, he did it not because he wanted to but to make his father happy. Harris's father, Hawley Harris, was a longtime Guyanese cartoonist. Yet when the younger Harris won the competition, it not only impressed his dad but changed the course of his life. With no formal training in cartooning beyond what he learned from his father, Harris began working as a weekly comic strip artist for the state-owned Guyana Chronicle, one of the largest daily newspapers in the tiny South American nation.

He's since expanded his portfolio to include political cartoons, and his work is now published in three major newspapers in the country of 773,000 people.  Harris's cartoons often ridicule authority and question government policy. With Guyana experiencing a major new oil discovery by ExxonMobil Corp. that could transform it from one of Latin America's poorest nations to one of its wealthiest, the number of targets for Harris's cartooning pen has expanded.

"It is a natural high...when I ridicule and lampoon our parliamentarians and president," he says, in an interview with Global Journalist. "That is what the people look for and what my motivation is."

Global Journalist: How do you describe the oil discovery and the related discussion about it in your cartoons?

Harris: I speak about the oil potential that we have, just the same as any other resource we have such as gold, diamonds and bauxite. Since the oil discovery was made public, there are "experts" popping out of the world everyday and everywhere. I do not profess to know anything about oil, production, extraction...but I take the issues that come out of the oil discussion and make light of it.

Much of it is quite comical, and hopefully the common man will understand [the issues] as well as the experts.

A cartoon by Harris in the Stabroek News ridicules Guyana's government over its relationship with ExxonMobil, which recently mad a major offshore oil discovery in the country. Guyana's media recently reported the government had secretly accepted an $18 million signing bonus for its agreement on an oil contract with the U.S. company.

GJ: How do you want your audience to see your cartoons?

Harris: I want people to see my cartoons as a way of expressing themselves through their own thoughts, words...their own deeds. If its humorous, that will get the message across much easier. Hopefully my cartoons get people to laugh or at least smile. 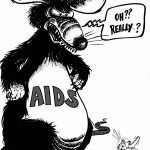 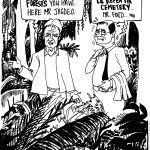 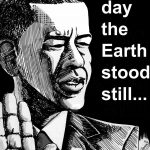 Barack Obama's election in 2008 made waves in Guyana. 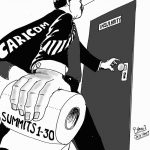 Harris satirizes the ineffectiveness of a Caribbean grouping of governments.

GJ: How is the cartoonist profession seen in Guyana?

Paul: In Guyana not just cartoonists [but] artists as well face a daily struggle not just to survive but to be respected. There are many people out there, in Guyana at least, who see artists as not significant or any use to a society.

I get annoyed when I hear from people who think that way. There are some people who are saying, how come we are paid for our artistic endeavors? Like anybody else, artists also have to eat.

A comic in the Stabroek News lampoons the Guyana government's negotiations over oil revenue sharing with ExxonMobil. (Paul Harris/Stabroek News)

GJ: Do you get a lot of complaints about your cartoons?

Paul: It has happened quite a few times. I offended people in the government, the business community, the church. I I just do what I think is the correct thing to say in a humorous way. [If] people that I work for don't think that it is appropriate, they don't print it.

I like to keep my cartoons topical and it is the art in it that I look for. My cartoons speak of the issues at hand. It is a natural high doing cartoons, especially when I ridicule our parliamentarians and president.