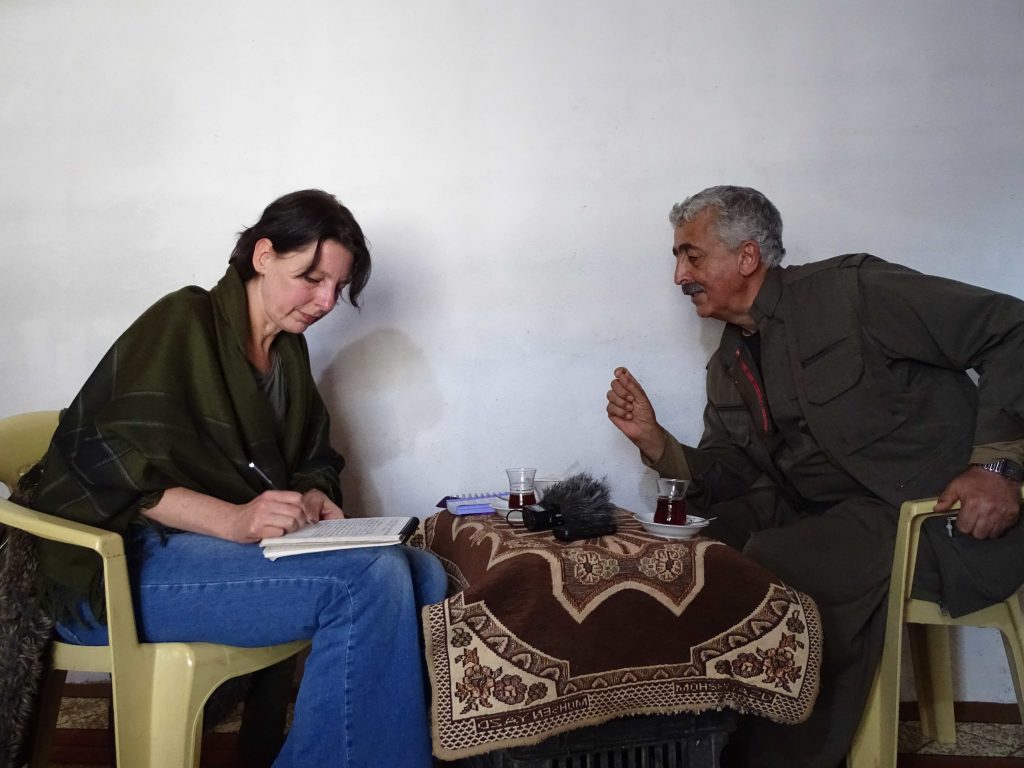 "They robbed me of my life, my job, so they're going to have to pay for it."

Fréderike Geerdink had made a home for herself in Turkey. The Dutch journalist moved to Istanbul in 2006 to become a foreign correspondent, and soon found herself drawn to writing about the country's long-repressed Kurdish minority. Geerdink, pictured in 2013 in Diyarbakir, Turkey.

It was a dynamic time to be covering Kurdish issues in Turkey. Turkey then was actively pursuing membership in the European Union and had been seeking to ease tensions with the Kurds. In 2009, then Prime Minister Recep Tayyip Erdogan backed a reform plan that eased cultural restrictions on Kurds and created a 24-hour Kurdish language news network. Four years later the leader of the main Kurdish rebel group, known as the PKK or Workers' Party, called for a ceasefire in its long-running insurgency against the Turkish government.

As for Geerdink, her interest in Kurdish issues led her to move from Istanbul in 2012 to the southeastern provincial capital of Diyarbakir, a mainly Kurdish city near the Syrian border that was soon transformed by the spiraling war next door. That year she reported on a Turkish airstrike that killed 34 Kurdish civilians near the Turkish-Iraqi border, and eventually wrote a book about the incident called "The Boys Are Dead."

But by 2015, relations between the Kurds and President Erdogan's increasingly authoritarian government were worsening amid tensions fueled by the war in Syria. Geerdink's reporting on human rights abuses by the Turkish government and the renewal of fighting between Kurdish militias and Turkish troops soon landed her in trouble. In July of that year, the PKK ended its truce with the Turkish government.  Geerdink was twice detained by Turkish security forces, and in September 2015 was expelled from the country.

Now 47, Geerdink lives in Amsterdam as a freelance journalist specializing in Kurdish issues, and has written for outlets including GlobalPost, the BBC and the Independent as well as many Dutch news organizations. Her second book on the Kurds, "This Fire Never Dies," is slated for publication this year. Geerdink spoke with Global Journalist's Jonathan Mitchell and Blythe Nebeker about getting kicked out of the country and her efforts to hold the Turkish government legally accountable for her expulsion.

Below, an edited version of their interview:

Global Journalist: What made you decide to move to Turkey?

Geerdink: I wanted to be a foreign journalist and I was thinking which country would be good, especially for a freelancer because I didn’t have any contract with any media. I needed to go to a country where there is a lot of attention [on] that country in the Netherlands. There were so many developments in Turkey, economic and political, and at the time they were still serious about European Union access....I thought this could be a good country for a freelancer. Between 2004 and 2006, I traveled there often to see if I could make stories and sell them. In 2006, I thought: 'Let's take the step.'

GJ: How did you come to focus on Kurdish issues?

Geerdink: Human rights have always been my topic. I wasn't really writing about it that much, but it was always in the back of my mind. It really became much bigger at the end of 2011...the Turkish army bombed a group of civilians at the Iraqi border. The civilians were smuggling tea and petrol and cigarettes, and 34 people died, 19 of them underage [boys].

I went to the village, first just to make news stories about this massacre, but I was there only for one day and it raised so many questions.

I kept going to the village to find out more about life there, about the history, about the massacre...because I really wanted to know what happened. In general, [foreign] journalists in Turkey are based in Istanbul and in the capital Ankara and they only go to the southeast to the Kurdish areas when there are elections or big demonstrations. There are not many Western journalists who know the daily life there and who really go tot he villages and talk to the people. I thought that was a gap in Kurdistan reporting, so I thought it would be interesting and relevant to fill the gap. GJ: What caused your expulsion from Turkey?

Geerdink: My trouble began in January 2015. I got a knock on the door in the middle of the day and opened the door a little bit annoyed because I have a bell and I thought: "Why aren't you ringing the bell?"

There was an anti-terrorism police squad there all pointing their guns at me, so I decided not to get too angry. They were there because I had been suspected of making propaganda for terrorist organizations.

They took me to the police station and they questioned me, but there was a lawyer present. The same day I was released again, and they decided to start a case against me. They didn’t find any evidence, but still decided to make a case. In early April, I was in front of the judge and I was acquitted, but then the prosecutor decided to appeal, and that appeal is still running.

I was kind of naïve at the time. I thought, I can do two things: I can go on the way I have been doing my job or I have to quit journalism, because there is no middle way. You can’t really adjust to rules that are not clear.

Then I was making a story in the southeast in a small town close to the Iranian border. I went with a group of people to a valley, they were a human shield group. Kurdish people do that often, they go to areas where the PKK and military are clashing, they set up a tent and make themselves a human shield to stop, or at least reduce, the fighting.

I went back to the village and police arrested us. They kept us in jail for two nights and three days and then they released us. So, I was still stupid, I said to myself, “Oh that’s good, I was released now I can continue my journey.”

Then the lawyer said: “Actually I think they might throw you out of the country now.”

There was nothing I could do, they put me in this armed vehicle and took me to the governor’s place for one night and the next day I was on a flight to Amsterdam. GJ: So to this day, you're not allowed to go back to Turkey?

Geerdink: No. My lawyer started a case against the entry ban. It was rejected on appeal, but I am now going to the constitutional court in Turkey and they will reject it too, because it is all under Erdogan's control now. But I plan to go to the European Court of Human Rights to ask damages of the state. They robbed me of my life, my job, so they're going to have to pay for it. That will take years, but I'm looking forward to it.

GJ: What have you  been covering since you were expelled from Turkey?

Geerdink: The first few months, I had to adjust to the new reality. I wanted to go back to Kurdistan. I decided to go to the PKK [in Iraq and Syria] for a year to write a book about them. The PKK has been having more and more influence on the conflicts in the Middle East, and many people don't know what they are actually fighting for.

So I thought I could stay with the PKK for a year and get to know the normal fighters, because the normal people always have the best and most genuine stories. I got funding from a Dutch investigative journalism fund, and then the PKK said you are welcome to [visit] us for a year. It was kind of a shock, I didn't really expect them to accept me.

[Last summer] I came back to Holland to write the book and I am finishing it this month....but now I'm sort of back to where I was when I was expelled from Turkey. I have to find a new road again.