Project Exile: Turkey reporter stayed one step ahead of crackdown 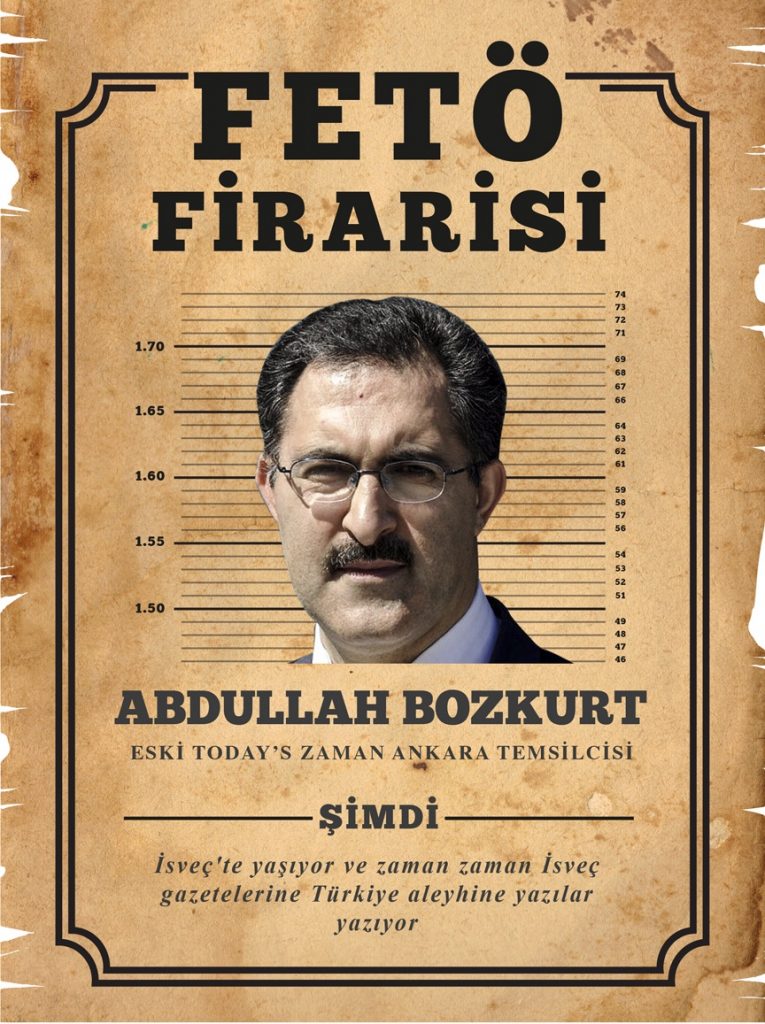 A "Wanted" image of Bozkurt circulated in Turkey's pro-government media.

"It was part of the intimidation campaign to go after family members, including my mother."

In hindsight, there were many clues that President Recep Tayyip Erdogan’s government was making preparations to eliminate Turkey’s independent media even before it launched a massive crackdown in July 2016. But perhaps the biggest tip-off was the March 2016 police raid and seizure of Zaman, Turkey’s largest daily newspaper. At the time, Abdullah Bozkurt was bureau chief in the capital Ankara for the paper’s English-language edition, Today’s Zaman. On March 4 of that year, Bozkurt found himself struggling to put out the newspaper’s final edition – even as he watched on live television as police in riot gear fired tear gas and water cannons on protesters and stormed Zaman’s headquarters 220 miles (350 km) to the west in Istanbul.

Zaman had been in Erdogan’s crosshairs for some time for its sympathies with the Gülen movement, an opposition group affiliated with a U.S.-based Islamic cleric that Erdogan has branded a “terrorist” organization. It had particularly angered the government for its aggressive coverage of a 2013 corruption investigation that led to the arrests of three sons of ministers in  then-prime minister Erdogan’s government, Bozkurt says.

“Initially, they started calling in public rallies [for people] not to purchase our newspaper,” says Bozkurt, in an interview with Global Journalist. “Amazingly, at the time our circulation went up because we were one of the few media outlets in Turkey that were still covering the corruption investigation…later they started putting pressure on advertisers. That didn’t work out either because our circulation was quite high.”

After Zaman’s closure, Bozkurt briefly opened his own news agency. A few weeks later, on July 15, 2016, a faction of the military attempted to overthrow Erdogan. The coup was put down in a matter of hours. But in its aftermath, Erdogan unleashed a nationwide purge.

Over 100,000 government workers were fired and 47,000 people were jailed on suspicion of terrorism, according to a tally by Human Rights Watch. An additional 150 journalists and media workers were also jailed, giving Turkey the highest number of jailed journalists in the world. Many others fled the country.

Bozkurt was among those who chose to flee rather than face arrest. Ten days after the failed coup, he left for Sweden. The day after he left, the offices of his fledgling news agency were raided by police. Police later searched the home of Bozkurt’s 79-year-old mother and detained her for a day. Bozkurt’s wife and three children later followed him.

In Sweden, Bozkurt received threats via social media and a Wild West-style ‘wanted photo’ of him was published by pro-Erdogan newspapers and the state-run news agency. The government has brought anti-state charges against 30 of his former Zaman colleagues, seeking as much as three life sentences in jail.

Bozkurt, 47, now writes regular columns for the news site Turkishminute.com and works at the Stockholm Center for Freedom, a rights group focused on Turkey. He spoke with Global Journalist’s Denitsa Tsekova about his last weeks in Turkey and his exile. Below, an edited version of their interview:

Global Journalist: Tell us about that last day at Today's Zaman.

Bozkurt: I was based in the capital, Ankara, but our newspaper’s headquarters was in Istanbul. The storming of our newspaper happened in Istanbul, we were watching on TV. We were on the phone talking to our colleagues in Istanbul, trying to find what’s going on, what we can do.

The police were coming into our Istanbul's newsrooms, ransacking the place, and shutting the internet service. It was up to me and my colleagues in the Ankara office to write the stories. We were actually printing the last edition of Zaman from Ankara. I was the one who drew the headline in the English edition and we managed to get out the last free edition.

In the Turkish edition, we managed to finish and print the first one, but the second and the third edition couldn't make it to the printing place. It was interrupted by the police and the government caretakers who took over the company.

GJ: There were protests after the closure of Zaman. What happened?

Bozkurt: It was on the day when the takeover judgment by the court was publicized. We didn’t call our readers to come and protest.

We knew it might be very dangerous because the government uses very harsh measures often rubber bullets, pepper spray and pressurized water against peaceful protesters. We didn’t want to put them on the risk.

Around 400 people showed up and they were beaten and targeted brutally by the police who stormed the building. A woman bleeds from an injury after riot police used tear gas and water cannons to disperse people gathered outside the headquarters of Zaman newspaper in Istanbul, March 5, 2016. (AP Photo)

GJ: What was the last article you wrote for Today's Zaman?

Bozkurt: It was about prisons. When I wrote that article I didn’t know the government was taking over the company, it was written a day before.

I talked to many people in the government and some from the European Committee for the Prevention of Torture. Something was very, very off because the government planned to build a lot of prisons in Turkey under the disguise of a modernization plan.

However, when you look at the numbers, it didn’t really match. We didn’t need that many new prisons in Turkey, but the government was making a projection that the prison population would increase.

When the European officials asked the justice ministry on what basis were they making this projection, they did not have a response. In hindsight, I could understand it was because they were preparing a new mass prosecution in Turkey and they needed more prisons to put these people away. Even the prisons we have now are not enough; people are living in very crowded cells. After the coup, the government even granted amnesty for some 40,000 convicted felons… just to make space for the political prisoners and journalists. The cover of the final edition of Today's Zaman.

GJ: How did you decide to leave?

Bozkurt: I actually hung around for a while after the failed coup, because I thought eventually things will settle down, and I wasn't planning to move out of Turkey at all.

[Ten days] after the coup, the government issued an arrest warrant against 42 journalists on a single day. I realized this is going to get worse, and I said it’s time for me to move out of Turkey.

It was a rash decision, I didn’t even know to which country I would go, so I had to go to Germany first and then to Sweden.

My mother was getting old, she has some health issues and I wanted to be there for her. But it wasn't up to me. Sweden was a stopover for me, I wasn’t planning on staying permanently.

The day after I left Turkey, the police raided my office in Ankara, so it was the right decision. If I was there I would have been detained and dragged to jail.

GJ: Were you getting threats?

Bozkurt: I was getting threats all the time. If you are a critical and independent journalist, you will get them. That’s the price you pay for it. Sometimes you try to be vigilant, you try to be careful and you just ignore that kind of threats or pressure from the government or pro-government circles.

But after the massive crackdown after the coup attempt, I thought it’s no longer safe for me. I moved out alone, I didn’t even take my family, because I thought they will stay in Turkey and I can hang around abroad and then come back to Turkey. That was my plan.

After a while, the Turkish government started going after the family members of the journalists. Bülent Korucu was a chief editor of a national daily [Yarına Bakıs], which was also shut down by the government, and he was facing an arrest warrant. The police couldn’t find him and they arrested his wife, Hacer Korucu. She stayed in prison for a month on account of her husband. At that moment, I thought my family is no longer safe either, so I decided to extract them out of the country. GJ: Was your family directly threatened?

Bozkurt: When I moved out of Turkey I kept writing about what’s going on in Turkey. I guess they felt uncomfortable with my writings.

It was part of the intimidation campaign to go after family members, including my mother. She is a 79-year-old, she lives alone but sometimes my sister helps her out. Police raided her home in my hometown of Bandirma in December 2016, searched the house and placed her in detention for a day. She was questioned about me.

Why does she deserve that? They want me to shut up, to be silent even though I feel safe abroad.

GJ: What will happen if you go back to Turkey?

Bozkurt: Of course I will get arrested. They even posted a “wanted” picture of me, and it was run in the pro-government dailies and in the state news agency. It’s like in the old Western movies: there is a picture of me and where I live. I have no prediction when I can go back to Turkey.