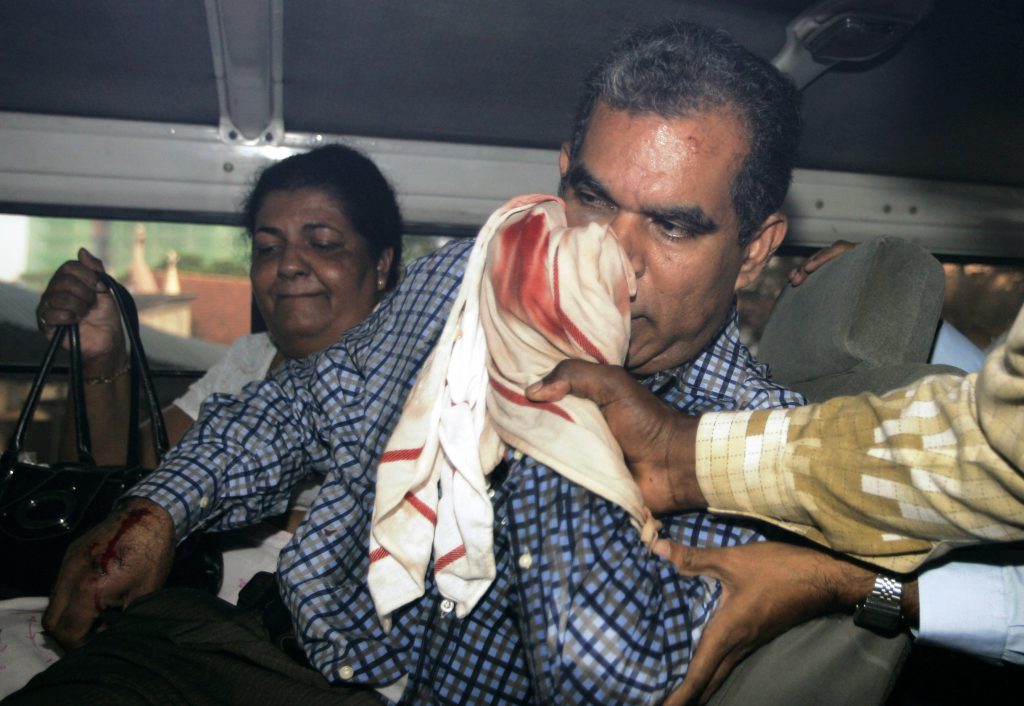 When former editor Upali Tennakoon speculates about what led to the attempt on his life in 2009, two incidents jump to mind. One was an editorial he wrote for Rivira, the Sri Lankan newspaper he managed. The other was an article he chose not to publish, a move that angered a powerful army general.

At the time, Tennakoon knew well the dangers for journalists in the South Asian nation. The government had barred reporters’ access to the part of the country where it was fighting Tamil Tiger insurgents, and criticized independent media’s “unpatriotic” coverage of the war, particularly reporting on human rights abuses by the military.

On Jan. 8, 2009 government critic Lasantha Wickrematunge, the editor of another Sri Lankan newspaper called The Sunday Leader, was shot and killed by four motorcycle-riding gunmen on his drive to work. Wickrematunge’s assassination came days before he was slated to give evidence in court about alleged corruption involving then-defense secretary Gotabaya Rajapaksa. The editor had foretold his death in an editorial he had ordered to be published in just such an event.

“When finally I am killed, it will be the government that kills me,” he wrote.

Fifteen days after the attack on Wickrematunge, it was Tennakoon’s turn. As he drove to work with his wife near the capital Colombo, a man approached his car at about 6:40 a.m. “I thought he was trying to talk to me,” says Tennakoon, in an interview with Global Journalist.

Instead the man smashed the side window of the car with an iron bar and started attacking Tennakoon. Three other armed men on two motorbikes also joined the attack with knives, wooden rods and iron bars, breaking the windshield and the side windows. Tennakoon’s face and hands were bleeding. From the passenger seat, his wife flung herself on top of him in a desperate effort to shield him from the blows.

“[We had] nothing to do, anything,” he recalled. “They also tried to break my neck, but they missed it; otherwise I would have been dead.”

The assailants fled, and Tennakoon was taken to a hospital. Three weeks later, he and his wife fled to the United States, where they have lived for the last nine years.

Looking back, Tennakoon says that the attempt on his life may have been retribution for an editorial he wrote criticizing then-president Mahinda Rajapaksa’s government in the wake of Wickrematunge’s death.

Tennakoon says there is also a second possible motive. He was attacked for choosing not to publish an article written by one of his reporters based on information from army commander Gen. Sarath Fonseka.  Tennakoon thought the information was a misleading attempt by Fonseka to blame a rival, Sri Lanka’s then naval commander, for failing to stop a successful supply mission by Tamil rebels.

The precise motive remains a mystery in part because to date, no one has been successfully prosecuted for either the attack on Tennakoon or Wickrematunge. In 2016, with a new government in power, Tennakoon returned to Sri Lanka and identified one of his attackers from a lineup as an army intelligence officer named Premananda Udalagama. Udalagama had already been taken into custody in connection with Wickrematunge’s death, but was later released on bail.

Last year, police told a Sri Lankan court that the former army commander Fonseka had testified that the former defense secretary, Gotabaya Rajapaksa, ran a secret intelligence unit outside of the normal command structure that targeted Wickrematunge as well as other journalists and dissidents, according to al-Jazeera. Rajapaksa has denied any wrongdoing, and both he and Fonseka did not respond to messages from Global Journalist. Tennakoon’s experience was hardly unusual. Between 2004 and 2009, 16 journalists were killed in Sri Lanka, according to the Committee to Protect Journalists.  In at least 10 cases, not a single suspect has been convicted.

Tennakoon, 65, now lives in Los Angeles and works for a rental car agency. He still blogs and writes occasionally for Helabima, a U.K.-based Sinhala-language publication. He spoke with Global Journalist’s Yanqi Xu about his attack and the problem of impunity in Sri Lanka, where a new government elected in 2015 came to power promising to prosecute those responsible for attacks on journalists during the civil war. Below, an edited version of their interview:

GJ: What happened right after you were attacked?

Tennakoon: I called the police. We stayed in the hospital for five days.

The situation was fearful. I got threatening calls and was asked to leave the country immediately. My friend at the newspaper asked [then] defense secretary Gotabaya Rajapaksa to send security to me while I was in the hospital, but the defense secretary refused and said it was not necessary.

[After the hospital] I didn’t go back to my place and stayed at my wife’s parents’ house… I knew the perpetrators might be waiting for a second chance to finish their job… We left on Feb. 14 [2009] because I did not have any backup in Sri Lanka. My wife and I both had five-year multiple-entry visas to the U.S., so we decided to come. After we arrived, we applied for asylum. We were granted asylum about seven months later. GJ: What do you know about the people who attacked you?

Tennakoon: The Crime Investigations Department [CID] investigated the telecommunications of those who might have been involved in these cases [of attacks on journalists]. They thought some were related to my case.

My wife and I went back to Sri Lanka in 2016 and identified one attacker, who was actually intelligence personnel. I went alone again in early 2017, but didn’t identify anyone.

Evidence has emerged over the connections between the killing of Lasantha Wickrematunge and the assault on me. It can be assumed that the same squad handled both attacks and I believe their intention was to kill me. Such a squad involving the members of the military could not have been formed without the support of the top-brass of the military.

GJ: Do you think you’ll see justice for your attack?

Tennakoon: I do not believe that in the current political situation the attackers will be brought to justice. The previous government never inquired or arrested anyone.

The new government promised to inquire into cases of violence against journalists and bring the criminals to court during the election.

But now they are not helping the police and CID to access the information they needed. I have the feeling that current political authorities too are trying to protect the perpetrators… their intention is only to take political mileage out of these cases. They are not bothered about bringing culprits to book.

The current president [Maithripala Sirisena] asked why the attackers were remanded for so long and talked about their human rights, but he was not talking about our human rights. We, in hundreds, lost our jobs, and Lasantha Wickrematunge even got killed. The case is still being heard… the issue is that justice is getting delayed. And, as we all know, justice delayed is justice denied. GJ: Was it a hard choice to leave Sri Lanka? Do you feel safe to returning now?

Tennakoon: It was difficult to give up journalism as it was a huge part of my life. I also had to leave my parents behind. I have no wish to return since the individuals who I believe to be responsible are still in positions of power… Sarath Fonseka, the then Army Commander, is now a cabinet minister. Former defense secretary Gotabaya Rajapaksa plays an active role in the political domain too, though he is out of power.

I feel [releasing suspects on bail] jeopardized my personal safety. I don't know what will happen to me when I visit Sri Lanka next time. I do not feel safe to return.