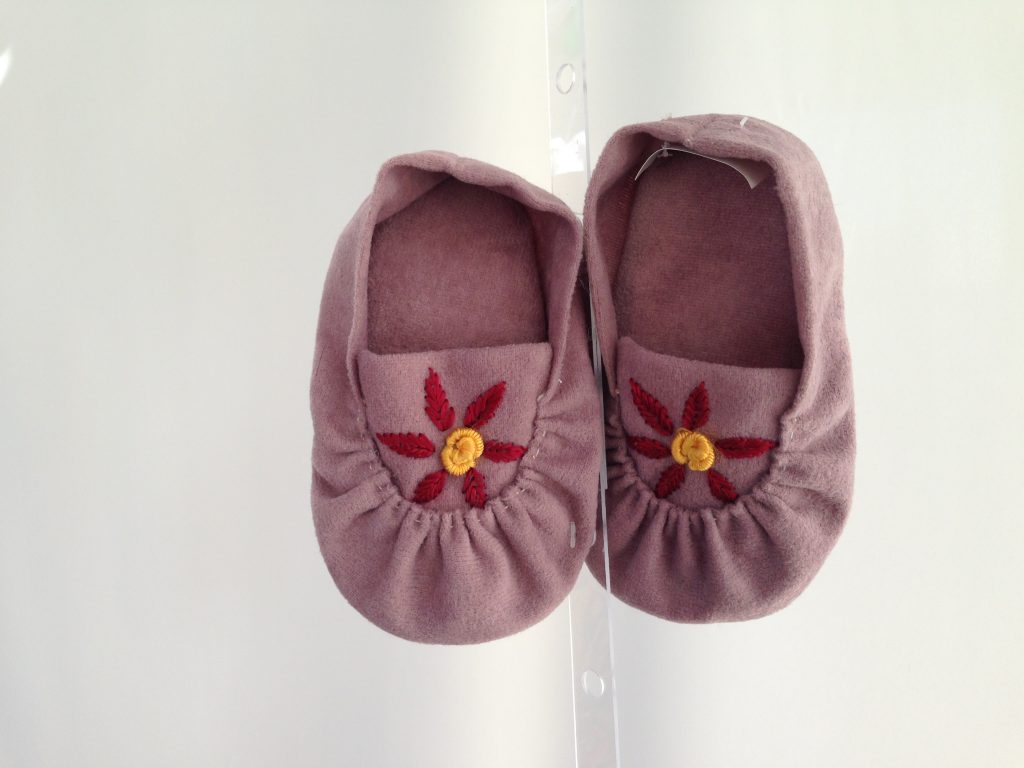 An art exhibit organized by the Gendercide Awareness Project in 2016 consisted of 11,700 baby booties to represent women and girls missing due to sex-selective abortion, violence against women and other causes. Most of the booties were custom-made by women's sewing cooperatives in the developing world. (courtesy)

To help explain why her organization spent six years gathering more than 10,000 custom pairs of baby booties from more than 500 seamstresses in Kyrgyzstan, Rwanda and 28 other developing countries,  Beverly Hill has a story. Hill is the founder of the Texas-based Gendercide Awareness Project, a rights group that advocates against practices like sex-selective abortion, female infanticide and the neglect of young girls in countries like India and China.

As a way to raise awareness, she commissioned 11,700 pairs of booties for an art installation called "100+ Million Missing" that opened last year in Dallas. Each pair was a kind of memorial representing 10,000 of the 117 million women and girls the group calculates are missing in the world due to 'gendercide,' a term that includes issues like 'honor' killings and preventable maternal death.

The booties, procured from women's sewing cooperatives, were arranged in a floor-to-ceiling maze that filled nearly 2,000 square feet. As visitors traversed the maze, they were surrounded by baby booties on all sides –  the density increasing until the visitor couldn't see the end of the maze.

"When we asked the women to make the baby booties, we asked them to make them as if for their own children," says Hill, who trained as a sculptor before becoming an activist on women's issues.

She spoke with Global Journalist's Jaime Dunaway about the unusual effort to raise awareness about gender violence, as well as the practice of sex-selective abortion in South Asia, where high dowry costs lead to a cultural preference for male children. Global Journalist: Why did you choose to highlight this problem through art? How can art raise awareness and educate people in ways that other methods cannot?

Beverly Hill: In two weeks, the art exhibit enabled us to educate twice as many people as everything we had done during the six preceding years.

Nearly everyone said the experience was unforgettable, and that’s the power of good art. You can read a dry, disembodied statistic in a newspaper, and you will forget it very quickly. But art has staying power, and it makes you realize that this is about human beings, not statistics. That’s why we chose to make the exhibit from objects that are beautiful — like human beings. GJ: Why did you use booties to represent missing girls?

Hill: We wanted to represent missing women and girls with objects that are as beautiful and individualized as they are. Traditionally, when women make baby booties, they do so with great love. We wanted to hold up the vision of that love being extended to all the girls who are rejected, and at the same time, demonstrate the terrible scale of gendercide.

When we asked the women to make the baby booties, we asked them to make them as if for their own children. We wanted the contrast between the beautiful booties and their terrible significance to create emotional dissonance in the viewer. That’s a very uncomfortable feeling.

GJ: In your experience working with at-risk women, do you have a personal story from a woman who has been affected by gendercide that you could share with us? Hill: Yes, one woman shared her story anonymously – decades after the experience. We’ll call her Aanya, and she lived in South Asia when this occurred.

Aanya was an affluent, well-educated, professional woman who cherished her two daughters and loved them dearly, yet her friends and family always expressed pity that she had only daughters.

Aanya and her husband learned that they had a third girl on the way. The in-laws reacted with strong displeasure. They had not wanted a second granddaughter, and they certainly did not want a third. After receiving much pressure from the family and community, the couple decided to abort the unborn girl child. The mother felt terrible taking the life of another like herself.  The decision ran counter to her strong, instinctive desire to nurture the child. The abortion took a devastating emotional toll on her.

Years later, she bore a son, fulfilling the wishes of the elders. She was no longer an object of pity, but her trauma did not end. From time to time her subconscious thoughts surfaced to confront her with what she had done. To this day, she regrets that she aborted a perfectly healthy baby girl. She cannot forgive herself.

It is time to tell these stories – to provide counseling and healing to women carrying secret pain and trapped in a culture that demands silence to avoid shaming the parents and in-laws.