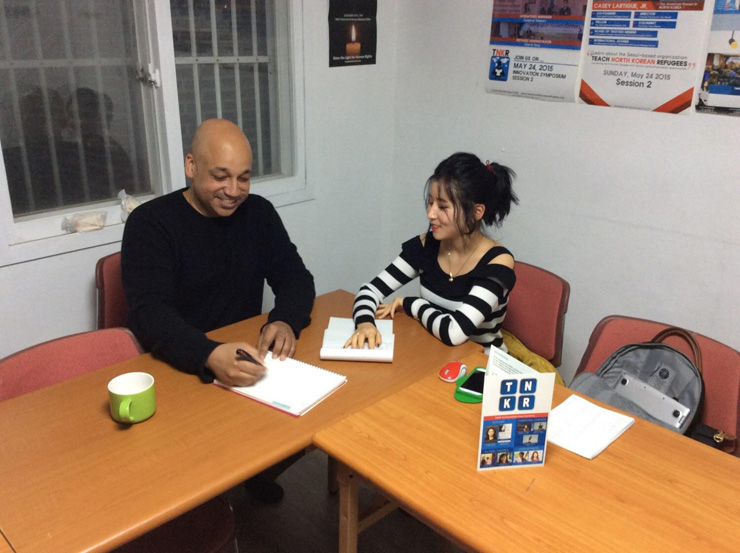 After a stint teaching English in South Korea in the 1990s, the Texas native and Harvard grad went back to the U.S., where he hosted his own satellite talk-radio show on XM’s “The Power.” In 2007, he was fired by Radio One, the channel’s owner, after criticizing what he saw as black talk radio’s penchant for promoting conspiracy theories, like the idea that KFC and other restaurant chains secretly put ingredients in their chicken that sterilize black men.

Lartigue also worked in Washington at the libertarian-leaning Cato Institute promoting school voucher programs before returning to Seoul in 2010 work for the Center for Free Enterprise, a Korean think tank that promotes limited government and deregulation of industry. But in March 2012, he became involved in protesting the forced repatriation of 30 North Korean refugees detained in China. The incident made an impression on him, and the following year Lartigue co-founded Teach North Korean Refugees to help those who have fled the North learn English– a skill that is increasingly necessary to succeed in South Korea.

To date, it’s connected more than 300 North Korean refugees with volunteer tutors. Among the organization’s success stories are Yeonmi Park, a refugee who has become a prominent human rights activist, and Eunsun Kim, another refugee who wrote a book about her escape from North Korea.

Lartigue, who is also a columnist for the English-language Korea Times, spoke with Global Journalist’s Rayna Sims about why he got interested in teaching English to North Koreans and the challenges refugees face in South Korea. Below, an edited version of their interview:

Global Journalist: Why is it important for North Korean refugees to learn English?

Lartigue: Back in 2011, before I got involved in this, I had a lot of refugees asking me if I could teach them English. I was wondering why… this is South Korea.

But there are a couple of reasons: No. 1 is because, within the South Korean language, a lot of English has seeped into it – they call it ‘Konglish.’ The second reason is that a lot of the refugees who go to college, they struggle because South Korean universities now require English, English textbooks, lectures in English, so a lot of refugees struggle...their classmates can understand, or at least can understand at a higher level than they can.

The third reason is that, along with those requirements for the daily use of English in the universities, many South Korean universities now require...a certain score on a standardized English test score to graduate from university. There are some refugees, they can fulfill all the requirements except English...According to one researcher, 32 percent of the refugees who drop out of college do so because they cite English as a barrier.

Many South Korean companies now require English as part of the application process. And then, if they get hired, they’ll struggle in the daily work...Our program has a waiting list of about 70 to get into it. We don’t advertise at all, they come looking for us. So many of them say they have English emergencies. GJ: How does the Teach North Korean Refugees program work?

Lartigue: When [refugees] join, they go to a matching session, and they can choose their tutors there. What we say to both sides is: minimum three months to start. After three months, they can review – the refugee can communicate to us if he or she wants to continue. Each tutor that they choose, they will study with that tutor a minimum of twice a month, 90 minutes each session. So the average refugee chooses three tutors when they join the program, so that means a minimum of six one-to-one private lessons per month.

GJ: Are all of the tutoring sessions done in person?

Lartigue: It’s one-to-one, face-to-face. Over the years we’ve probably had about 500 volunteers ask if they could teach the refugees through Skype or other video chat things, and the reality is that refugees say they don’t want it.

GJ: Do you have a favorite moment from speaking with refugees or tutors?

Lartigue: Almost every day...We’ve had refugees that come to our sessions – they’re really shy. For some of them, they say it’s the first time they’ve been in a room with foreigners. And then, the first time in a room with so many foreigners, like 10 to 15 foreigners looking at them all saying that they want to help. So, some of them just talk about what a beautiful moment it is for them when they’re looking at all these nice people who want to help them.