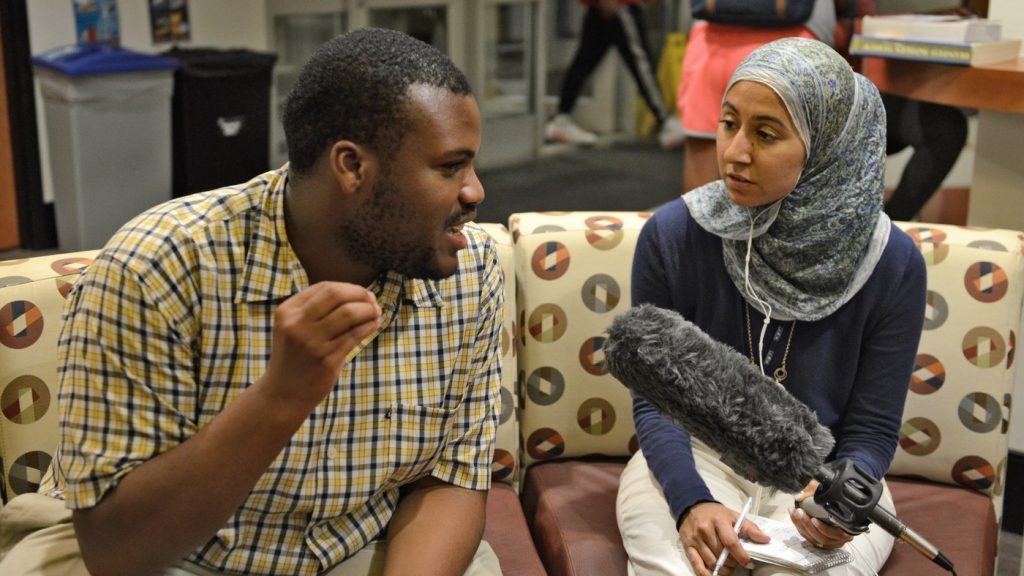 "As a journalist you want people to share their thoughts and their emotions with you."

If there were only two words Asma Khalid would like radio listeners to associate with her work, those would be “empathy and fairness.” But these principles were tested when the story Khalid was covering turned on her and she came to symbolize something more than just a reporter doing her job.

Those living in Boston today might be familiar with her business and tech stories for Boston public radio station WBUR, but listeners nationwide may recognize Khalid's voice as one of NPR's lead campaign reporters during the 2016 presidential election.

The story, of course, was the rise of Donald Trump from reality TV show star to the nation's highest office. Trump, of course, referred to reporters during the campaign variously as "scum," "slime," and "the most dishonest people that I have ever met."

But Khalid stood out from her peers in the political press as a Muslim woman who wears the hijab, or headscarf.  That sometimes made things especially uncomfortable for her during a campaign in which Trump falsely claimed that "thousands" of New Jersey Muslims cheered the attacks of Sept. 11 and in which he called for a "complete shutdown of Muslims entering the United States."

Suddenly, it seemed to Khalid that her very existence in the U.S. seemed to be a talking point, something she dismissed as “sort of a non-debatable issue.”

"Sometime in early 2016 between a Trump rally in New Hampshire, where a burly man shouted something at me about being Muslim, and a series of particularly vitriolic tweets that included some combination of "raghead," "terrorist," "bitch" and "jihadi," I went into my editor's office and wept," she later wrote on NPR's website. "I cried for the first (but not the last) time this campaign season."

As a reporter, she made an effort to separate the average Trump voter from the campaign rhetoric or the abusive outliers, said Khalid, during a visit to the Missouri School of Journalism earlier this year to receive an honor medal from the school. Her upbringing in a mostly-white and conservative town in Indiana helped. “I understand and recognize what a lot of Trump supporters were feeling,” Khalid said. “Whether or not [I] agree with it, as a journalist you want people to share their thoughts and their emotions with you. [I] was there to share their story and not to judge.”

Indeed Khaled's childhood in Crown Point, Ind. is something of a testimony to the U.S.'s ability to integrate people of different backgrounds and religions.

"I loved our childhood — summers playing basketball, winters sledding," she wrote on NPR's website. "We weren't outsiders — I sold Girl Scout cookies, was captain of the tennis team. We were part of the club — or so we thought."

Khalid’s interest in journalism bloomed at age 7 when she read a biography of Nellie Bly, the Victorian-era journalist famed for her world travels and undercover reporting. Bly’s life had all the ingredients to draw Khalid to journalism, primarily a sense of adventure.

“[I] resolved that’s what I would like to do,” Khalid said. She went on to work on her high school paper and majored in journalism.

Khalid graduated from Indiana University in 2006 and earned a master’s degree in Middle East and Islamic Studies from the University of Cambridge.

In her early career, one of the biggest stories Khalid worked on was the 2013 Boston Marathon bombing, an attack that coincided with her first move as a reporter to Boston for WBUR. It was something she referred to as “a trial by fire” for a journalist. Khalid had been at the marathon as a spectator just mere hours before the attack. After the explosion, Khalid’s editor sent her to the local hospital, which she struggled to locate because of how new she was to city.

“I think that it was sort of a moment to sink or swim as a journalist,” Khalid said. “Really, I look back on it and I feel it was a challenge because I didn’t know the city and I hardly knew the people.”

The experience impressed on her the volatility of race and religious relations in the U.S., something she would come to see up-close later in her career. One of the few friends she had in Boston at that time was the director of the Islamic Society of Boston.

“[He was] the classic example of the ‘model Muslim,” Khalid said of her friend. That didn't protect him from anti-Muslim sentiment in the aftermath of the bombing, which was carried out by two Chechen brothers who had immigrated to the U.S. as children. “[He] played on the soccer team, went to Princeton... And there were some really vicious verbal attacks that I heard about him that, to me, was really heartbreaking.”

In July 2015, Khalid switched from WBUR to NPR’s national political reporting team and began covering the presidential election campaign, and her ability to integrate data with the stories of ordinary voters soon stood out. Over the course of 18 months, Khalid produced innovative reports ranging from campaign trail dispatches to intimate interviews with voters of all persuasions to interactive charts based on the latest polling figures. Her work even garnered a reference from then-president Barack Obama.

Khalid can recall the day Trump announced that he was entering the race.

“I don’t believe that anybody took him very seriously,” she said. But the unprecedented nature of the campaign, Khalid said, was clear from the start.

“There were many things that Donald Trump said and did,” she said.  “Even in that first announcement speech, he mentioned a classic line about Mexicans… some that are rapists and criminals...but that some of them were good. That line went on to become sort of a joke among some people later on. But I felt in many ways that it was very prescient, it gave us this idea of what type of campaign that he would run, that was very ethnically divisive in many ways.”