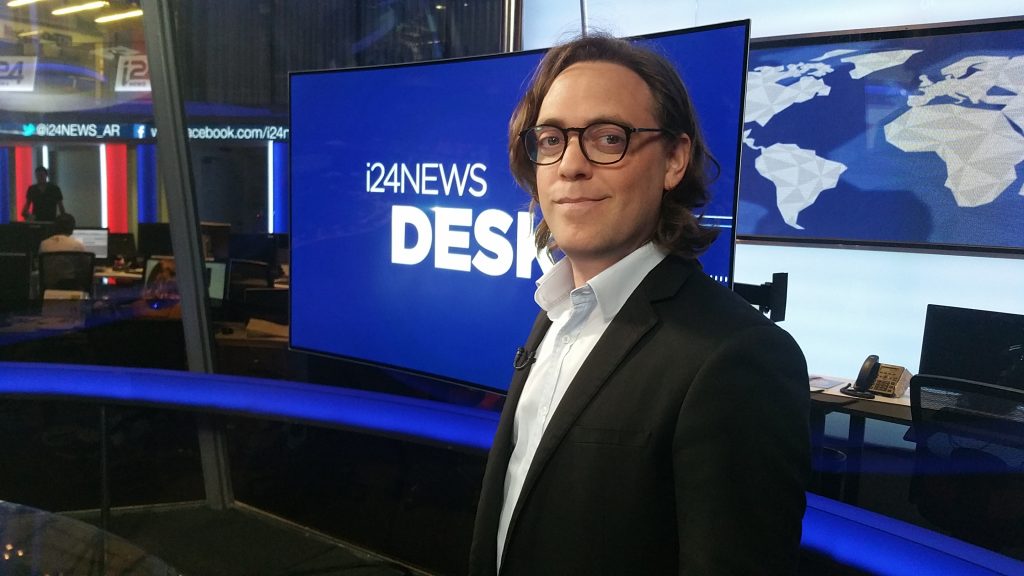 "I was sure they were going to kill me, taking into account what happened to Nisman."

It was a story that shook Argentine politics. For the journalist who broke the news, it upended his life.

On January 18, 2015,  Argentine prosecutor Alberto Nisman was found dead of a gunshot wound in his apartment just days after releasing a 289-page report accusing then president Cristina Fernandez de Kirchner and her foreign minister of covering up Iran's involvement in the 1994 bombing of Asociación Mutual Israelita Argentina (AMIA), a Jewish community center. The explosion killed 85 people and was the deadliest terrorist attack in the country's history.

The journalist who broke the story of Nisman's death on Twitter was Damian Pachter, a young Argentine-Israeli reporter for the English-language Buenos Aires Herald.

"Prosecutor Alberto Nisman was found in the bathroom of his house at Puerto Madero. He was not breathing. The doctors are there," Pachter wrote.

That tweet set off a chain of events that led both to an investigation of Kirchner and to Pachter fleeing Argentina for Israel. Kirchner's government, which had been seeking to undermine Nisman's allegations, immediately labeled his death a suicide, as Nisman's body had been discovered with a handgun nearby. "What led a person to make the terrible decision to take his own life?" she wrote on Facebook, soon afterwards.

Nisman's death and Kirchner's move to call it a suicide triggered a massive protest in Buenos Aires. The Argentine government was later forced back away from its claims that Nisman had committed suicide, and Kirchner's Front for Victory narrowly lost presidential elections later that year. An investigation into Nisman's death concluded earlier this year that it was a homicide.

Pachter, who had been working on a freelance story for an Israeli newspaper about Nisman's investigation of the bombing and the government's efforts cover up Iran's role, was soon targeted by the government.

Six days after Nisman's body was found, he fled to Israel with nothing but a backpack.

Pachter, 33, now works as a producer for Israel's i24 News and as a host for Ñews24 in Tel Aviv. As for Kirchner, she has consistently denied any role in Nisman's death or covering up Iran's role in the AMIA bombing. In October, she won election to the Argentine senate, a position that gives her legal immunity from prosecutor's efforts to charge her with treason and covering up the government's role in Nisman's death.

Pachter spoke with Global Journalist's Maria F. Callejon about the strange days after Nisman's death and his flight from Argentina. Below, an edited version of their conversation, translated from Spanish: Global Journalist: Tell us about the night of Nisman's death.

Pachter: I was in the living room when I received the news of Nisman's death from a source at approximately 11 p.m. For 35 minutes I talked to my source to try to verify it. At 11:35 p.m. I sent the first tweet: "I have been informed of an incident at Prosecutor Nisman's house."

I already knew what had happened, but I took the time to talk to my source, to check there were no mistakes and to get as much detail as I could. At 12:08 a.m. I tweeted: “Prosecutor Alberto Nisman was found in his bathroom at his house in Puerto Madero. He wasn’t breathing. The doctors are there.”

GJ: What were your first thoughts after receiving the information?

Pachter: I was very robotic. Immediately, I started fact-checking. Pretty much like a machine: at first, it was shocking, but I was the one who got it and I had to make sure that everything was true to then publish it. That was it. I thought I was going to be fired for tweeting first. But I told myself that if I was going to be fired for something, it might as well be this, but I had to publish it. GJ: Did you think the government would try to cover up the incident?

Pachter: I can't say that I didn't, but I didn't imagine anything precise. Knowing the government and how they treated journalists critical of them, I thought that they would create a media campaign against me. I had delivered news that affected their power, I had to have the [courage] to endure what came after. It's part of the job.

I got into journalism for this kind of thing. There are ups and downs, but you have to do your job and that is to publish what they want to hide.

The investigation of Nisman's death took two years and a new government. The previous government almost shut it down. A couple months ago, the police determined it was a homicide. Think about what would've happened if nobody had said anything.

GJ: What happened the day after you reported this?

Pachter: We were all in shock, nobody could believe what was happening. There was an atmosphere of fear. I interpreted that as the government making a show of their power. They had ordered the killing of the prosecutor that had accused them, and I think they didn't consider the consequences. They didn't think that this would be important nor that it would have the popular response it had. People gather to demand answers from the government in the mysterious death of prosecutor Alberto Nisman during a protest in February 2015 in Buenos Aires. (AP Photo/Rodrigo Abd)

GJ: How was the rest of the week?

Pachter: People were calling me, I swear, they wouldn't stop calling from all over the world. We started doing some appearances on some big networks like CNN. In the meantime, I tried to do my job as normally as I could, but the emotion was so overwhelming, that didn't work. I had too much adrenaline.

In the days afterwards, a source of mine started messaging me to come visit. That source lived out of the city, so I didn't pay too much attention. In the meantime, I was preparing to face further attacks from the government. I knew I was going to be targeted for being Israeli and Jewish. So I thought I would go on TV and set the record straight. I knew that they would attack me for that. I was used to the government. Any journalists that confronted them would suffer the consequences.

GJ: Were you attacked for being Jewish?

Pachter: They will do anything to discredit you. Instead of saying that I was a journalist doing my job, they said that I was working for the Israeli intelligence services, that I was an undercover agent.

The government took pictures from my Facebook account of me in the Israeli army, something that I'd already talked about publicly. They marked my face with a yellow circle and sent it to pro-government groups.

While this was happening, my source kept insisting that I visit.

On Thursday [five days after Nisman's body was discovered], I got an email from a colleague. The link in the mail showed that Télam, Argentina's government news agency, had published some information about me. My name was misspelled, my workplace was incorrect and they had changed my tweets [about Nisman's death]. Pachter says a photo of him from his Israeli army training shared on Facebook was used by the Argentine government to portray him as a foreign agent. (courtesy)

GJ: What did you do then?

Pachter: I left the newsroom and left my car parked there. I took a taxi back to my apartment. There, I packed a backpack with clothes for three days. That was my plan, to go and hide for three days until it all calmed down. For whatever reason, I grabbed my Israeli passport and my identity card. Then I took a bus out of town to meet with my source.

While I was waiting at the cafe of a gas station, I realized a man had come into the cafe and there was something strange about him, his body language and his presence. I sat still in my seat. Time passed and this man was still there, not asking for anything to drink or eat.

My source called me and told me to stay wait for him. Twenty minutes later, he was there. He came in through the back door, so he saw the man sitting behind me. My source approached me and said: "Don't turn around. You have an intelligence officer behind you. Look at my camera and smile."

We pretended as if he were taking my picture, but he really took one of the man. When he realized what we were doing, he left. Right then I knew I had nothing else to do in the country. I was leaving. I was sure they were going to kill me, taking into account what happened to Nisman.

GJ: How did you plan your trip?

Pachter: At the cafe I did what I could to book a flight as soon as possible. The soonest one was with Argentina Airlines, from Buenos Aires to Montevideo to Madrid to Tel Aviv.

I went straight to the airport to catch my flight on Saturday [six days after Nisman's body was found]. I met my mom and said goodbye. I told her what was happening and she understood what was at stake. I also met with two colleagues of mine who were there to document it all. And then I left.

During my flight, the Pink House [Argentina's presidential residence and office] published on its official Twitter account the details of my flight. There it was clearly, just what I had thought: this was official persecution.

GJ: How did you feel when you got to Israel?

Pachter: Some friends and journalists from international media and local media met me there. Once I was there, it felt like a weight off my back. Once we landed, I felt safe.

GJ: Since you went into exile, Kirchner's government lost the election and she was replaced by opposition candidate Mauricio Macri. Have you considered going back?

Pachter: For now, I don't want to go back, as much as people tell me everything is fine. I have many feelings that discourage me from going. I was expelled, in a way, from Argentina. I was forced to go into exile because of my job.

GJ: Was it worth it?

Pachter: Yes, of course. I would do it a thousand times.