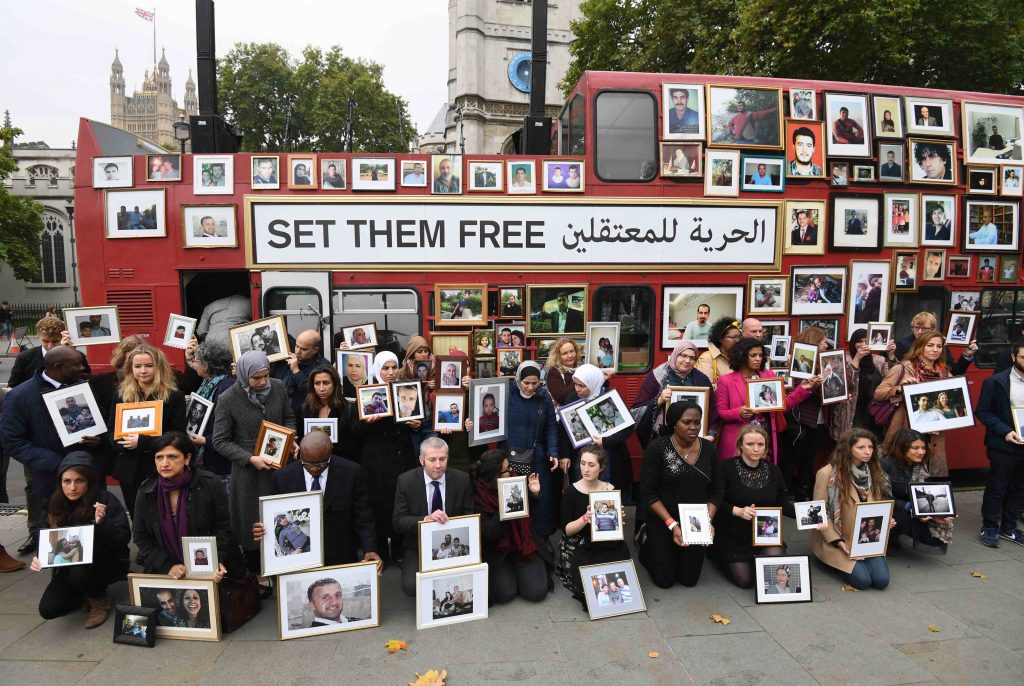 Women hold photographs of disappeared and detained Syrians as they stand next to a London double-decker bus during a demonstration organized by "Families for Freedom" in Parliament Square in London, Oct. 11, 2017. those missing in Syria. (EPA-EFE/Facundo Arrizabalaga)

Since the start of protests against Syrian President Bashar al-Assad during the 2011 Arab Spring, Assad's regime has detained thousands of protesters, opposition fighters and civilians suspected of disloyalty.

Nearly 100,000 people have been forcibly disappeared by Syria's government into a vast web of secret prisons, according to the Syrian Network for Human Rights. Those imprisoned are often systematically tortured and killed, with their bodies buried in mass graves. Mohammad al-Abdallah, 34, is among those trying to document the regime's human rights abuses – and he's particularly well-positioned to do so. As a Syrian human rights activist, he was imprisoned for a total of eight months in 2005 and 2006 by the Assad regime. That included a two-month stay in Syria's infamous Sednaya military prison on the outskirts of Damascus – where the regime is believed to have installed a crematorium to incinerate corpses and destroy evidence that could be used to prosecute war crimes. Both his brother and father were also incarcerated.

Abdallah came to the U.S. in 2009 and now works as the director of the Syria Justice and Accountability Centre in Washington, D.C., a group that tries to preserve evidence of atrocities by all sides in Syria. Though Russia and China have blocked U.N. efforts to investigate war crimes in Syria, the hope is that the evidence they gather can be used in future efforts at justice.

Abdallah spoke with Global Journalist's Jaime Dunaway about life as a political detainee in Syria and his current work helping build cases against those who have killed, raped and tortured.  Below, an edited version of their interview.

Global Journalist: What kind of work were you doing that got you arrested?

Mohammad Al-Abdallah: Before the [current] conflict, I joined the human rights movement in Damascus. My role was to monitor trials in state security court. I would attend the sessions and meet with families and write about what happened in military detentions.

My family all has an activist background. My brother was detained with other students from Damascus University for running a blog against the government. My father was in prison for writing [about topics like political reform and human rights].

GJ: Can you describe conditions in the prisons?

Al-Abdallah: Sednaya is the worst place. The moment you arrive, you’re blindfolded and handcuffed and taken on a tour of the prison. They want to communicate to you that you’re in a very bad place. People would be tortured on the spot when they arrived to break their personality and break their morale.

Interrogation involves beating, handcuffing, blindfolding and abusing family. You could hear and see people being tortured day and night.

They’re put in solitary confinement. I spent 55 days in one room. No light, no sun, no windows, no sense of time. It’s a place where everybody would be tortured on a regular basis. I was treated much better than other prisoners because the government cared more about activists at the time. A satellite image of Sednaya Military Prison, outside Damascus (Via Google Earth).

GJ: How has the situation in the prisons changed since the 2011 uprising?

Al-Abdallah: Interviewing recently released detainees is something we do a lot. The accounts of torture at Sednaya are unbelievably horrifying. The government introduced a field military tribunal, which is basically a panel that [issues] life sentences or death penalties. You don’t get a chance at a lawyer or anything. This is one of the more common reasons of death. Let alone the torture, food [deprivation] and health care.

There’s no visits to anyone. This is the most horrifying thing. You can be executed at any time, and the government can deny you were there. We interview families who will tell us the military police called them and said their son died of a heart attack. They don’t deliver the corpse or allow for legal questioning. Families are given a paper with the cause of death.

GJ: When you were in prison, did the regime provide information to your family about your whereabouts?

Al-Abdallah: I met my father inside Sednaya prison, and we both learned my brother was in the prison, but the prison guards denied it. We didn’t know anything about him for a year.

My mother didn’t know anything about us. Later when we appeared in court and managed to see our family, my mom told me, “We learned nothing about your whereabouts or your fate.” We just disappeared.

The minister of interior called my mother and told her to stop issuing statements about our disappearance. They told my mother we were in a military intelligence branch, but we were never there. The information he provided her was wrong. We appeared in court about 75 days after our arrest, but for almost 2 1/2 months, there was no information. Syrian President Bashar al-Assad, left, and his wife Asma, shake hands with a Christian orphan during their visit to Sednaya Convent Christmas day, 2016. The convent is in the same town as Sednaya prison. (AP Photo/Syrian Presidency via Facebook)

GJ: How do inmates cooperate to smuggle information out of the prisons and inform family members of missing loved ones?

Al-Abdallah: This happens all the time. Most of the time prisoners are scared when they’re released because they’re still under monitoring, so they will give information to activists who are tasked to make it public.

You’ll see social media saying, “A prisoner just released from Sednaya saw X and Z in 2015 all in good health. Please communicate with their families.” This information circulates very well.

The government takes steps to prevent this. When a person is released, they don’t send them home directly. They will take them to an intelligence branch, and they stay there for six months to a year. The system is basically to wipe their memories. In two years, you’ll more or less forget some of the names you were given or the stories you’ve seen, except in the case of your close friends or cellmates.

GJ: What does the Syrian Justice and Accountability Centre do to help with this problem?

Al-Abdallah: The work I’ve been doing is to document the human rights abuses after 2011. We put all this information in a database to make this documentation ready for future accountability measures. We have a team in Syria, Turkey, Jordan and Erbil, Iraq. We interview former political prisoners, focusing on victims of sexual violence and indiscriminate bombings.

One thing to highlight is the new mechanism started by the U.N. General Assembly. The mechanism is starting to investigate violations committed in Syria. It’s called the International, Impartial and Independent Mechanism.

We’re hoping our database will be transferred there where it could serve as a base for finding cases and following war criminals if they reach Syria.