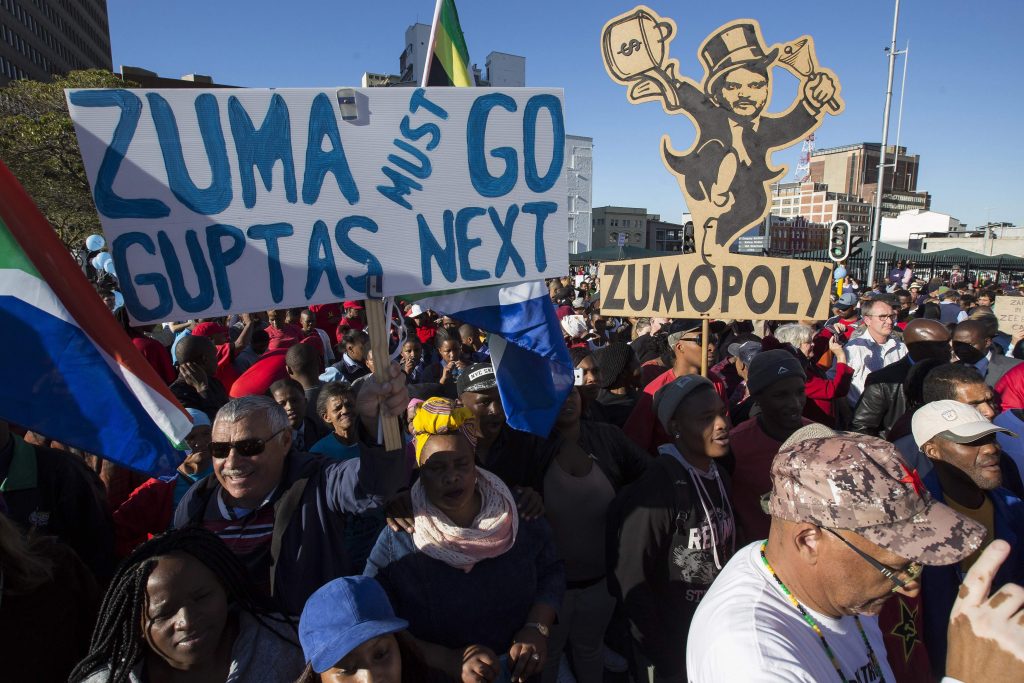 "It's not with pleasure that we view the decline and fragmentation of the ANC."

David Lewis came of age under apartheid as an organizer and later a leader of one of South Africa's largest trade unions - and was a strong supporter of Nelson Mandela's African National Congress party that toppled the racist system. After South Africa transitioned to democracy in 1994, he helped establish and later led South Africa's top antitrust regulator under successive ANC governments.

But today he's a thorn in the side of the ANC leadership.

That's because for the past five years he's been the executive director of Corruption Watch, the South African chapter of the the anti-corruption group Transparency International.  Since Lewis helped launch the group with backing from the Congress of South African Trade Unions and a number of foundations in 2012, the group has pursued investigations of President Jacob Zuma's controversial police appointments and offered friend of the court briefs supporting corruption suits over issues such as Zuma's use of $24 million in government money for improvements to his personal house including a swimming pool. It's received over 15,000 reports of corruption, and has even investigated bribery by children in schools.

Still Lewis is no stranger to controversy and criticism. As a white union leader of the mainly non-white General Workers' Union opposed to the apartheid government in the 1980s, he had an up-close view of the efforts to repress the anti-apartheid movement. In 1982, Lewis' colleague Neil Aggett, an organizer for the Transvaal Food and Canning Workers' Union, was arrested and found hanged to death in his cell after 70 days in detention. Other union activists were beaten or had relatives killed in mysterious circumstances.

Lewis spoke with Global Journalist's Lexi Churchill about his latest chapter as an anti-corruption activist and the changes in the ANC.

Global Journalist: Where do you most of your corruption reports come from?

Lewis: There are quite a few people in government who tend to be the source of reports of large-scale corruption. From the public, we are largely getting reports of what I think is often misleadingly called petty corruption, but the kind of corruption that impacts very strongly on everyday life.

[There are] a lot of reports about corruption in the management of resources at schools and the allocation of public housing, experiences in public health care systems and police generally. That makes up the bread and butter of the reports.

Corruption principally occurs in the interface between the public and the private, whether it's an interaction between a driver on the road and a traffic cop or a public procurement committee and a company wanting access to procurement.

GJ: How closely have you followed the corruption allegations against President Zuma?

Lewis: That was arguably the impetus to start this whole project in the first place, or a major impetus. It’s loomed larger and larger; we’re involved in lots of litigation involving Zuma and the higher reaches of the governing party.

This month, we’re involved in a significant piece of litigation involving his power to appoint the heads of the prosecuting authority and the police and the conflict of interest that represents. It's very politically engaged. Like most NGOs we’d prefer to steer clear of party politics to the extent that we can, but it becomes so intertwined with the whole corruption narrative, given that he’s the president and the head of the governing party. It's difficult not to engage in that.

We try to steer a nonpartisan course, but he’s unavoidable. We’ve been very active in the civil society movement that is demanding his recall or his removal as president. That’s not something we would normally do and didn’t do easily, but because he’s the president of the ruling party and absolutely centrally involved in the whole corruption narrative and corrupt conduct with his family and with his business associates, he looms very large in our activities.

Global Journalist: The ANC was viewed so positively in its early days with Nelson Mandela as leader. How has the perception of the ANC shifted with Zuma in power?

I think you’ve experienced in the United States the degrading of political parties and powerful institutions. hey take a lot of damage when they go down. So yes, I think there’s a huge fear in the ANC, and it’s the basis of the rising tide of opposition within the ANC against Zuma because there’s a fear that he’ll take the whole thing down with him and that’s not an exaggerated fear.

GJ: Where does Zuma’s continued support primarily come from?

Lewis: Largely in rural areas. First it's about a lack of alternative in some sense. The ANC’s greatest strength is the weakness of the opposition, although that’s starting to change. It would be wrong to imagine that there has been no progress since the fall of apartheid. One thing that has benefited the rural areas hugely is the massive sort of welfare grand scheme set up by the ANC government. It might be the largest welfare scheme of its kind in the world. It keeps a large part of the rural population alive.

Like all incumbents, the ANC has been clever in presenting to the rural areas that their social status depends on the ANC remaining in power.

And it is the party of Mandela. It's the party that led the liberation struggle. There’s a lot of emotional attachment to the ANC, something that a lot of us feel who were involved with them when we were in the union movement. It's not with pleasure that we view the decline and fragmentation of the ANC, but declining and fragmenting it is. It's sort of a shadow of itself.

GJ: What is the opposition looking like now that his resignation nears?

I don’t think anybody expects that the ANC will not be the largest party in the next election, but there is a very strong possibility that it may fall below 50 percent. So there is a possibility that there would be a coalition of opposition parties taking over. Although there’s not a hell of a lot of love lost between the opposition parties that would have to constitute the coalition. It might be easier for the ANC to constitute a ruling coalition with smaller parties. It would change the political game in South Africa very significantly.

The support [for the ANC] has declined in the past 20 years from the high 60 percentile to the low 50s. Certainly if the Zuma faction remains in control of the party come 2019, I think their support will decline considerably. I think they will fall below 50 percent which would necessitate them forming a coalition government or else their opposition forming a coalition and governing.

In some sense, all that unites the opposition is the antipathy toward the ANC.

GJ: Given there has never been a national coalition in the post-Apartheid period, what would that mean for the future of the government?

Lewis: It would be challenging. It would definitely be a new political dynamic for the country to get used to and the institutions to get used to. It may not be an entirely negative outcome. Coalitions have a way of pushing everybody to the center which is maybe what we need at the moment.

Some of the opposition parties are very new. They differ hugely from each other in terms of their constituencies, their policies, their rhetoric. The ANC is not going to be easily accepting of being the loyal opposition. They’ve had great difficulty accepting that in situations where the [opposition] coalition has taken over in important city governments. I think the next three or four years are going to be difficult years, but hopefully they’ll move into the right direction.