Inside a Chinese internet addiction camp 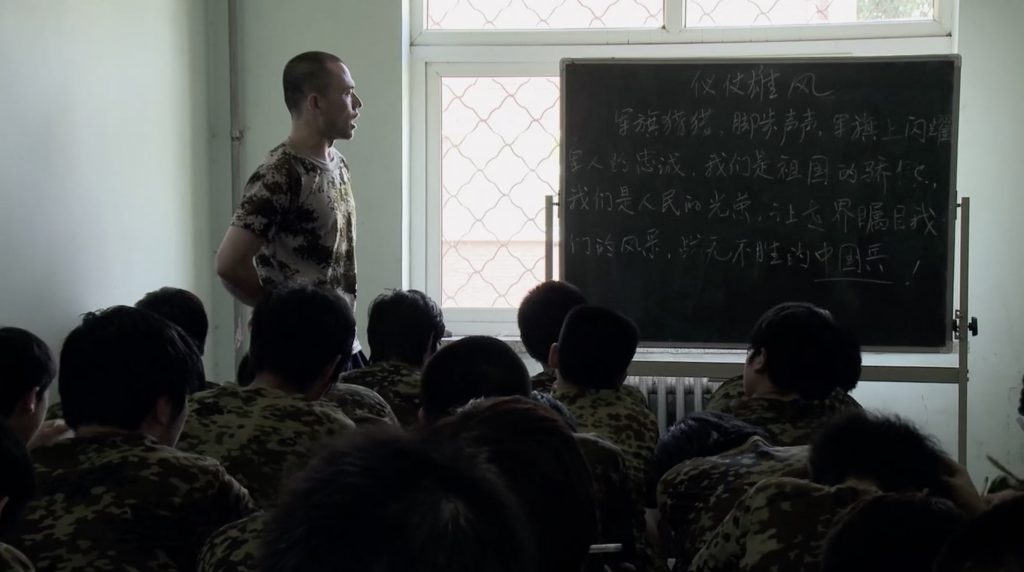 An instructor speaks at the China Youth Development Base near Beijing, a treatment center for internet "addicts" in this screen cap image from the 2013 documentary "Web Junkies." (Courtesy image used by permission)

In August an 18-year-old boy in China's eastern Anhui province was found dead with multiple injuries, just days after his parents had enrolled him in a boot camp-style treatment center for internet addicts.

The death, as reported by the BBC and other news outlets, was just one of a number of recent high-profile incidents involving such treatment facilities in China. Concern about the overuse of the internet is widespread in China, which back in 2008 became the first country to classify "internet addiction disorder" as a mental illness. Yet China's roughly 300 camps like that in Anhui have become controversial, and former patients have alleged they've been subject to beatings and electroshock treatments in the facilities.

To get a first-hand view, Beijing-based correspondent Jamie Fullerton visited one of the best-known and toughest rehab camps, the China Young Mental Development Base in Beijing. The $1,400 a month camp, which was the subject of the 2013 documentary "Web Junkie,"  is run by Tao Ran, a former colonel in the People's Liberation Army who often refers to online gaming as "electronic heroin."

Fullerton, who has written about the internet addiction treatment centers for the Mail Online, Vice and The Sun, spoke with Global Journalist's Denitsa Tsekova about the efficiency of internet addiction camps and the violence that shadows them. Below, an edited version of their interview:

Global Journalist: What kind of people seek treatment in these camps?

Fullerton: Most of the patients were teenagers, the average age was 16. There were about 80 people in total in the China Youth Mental Development Base. The vast majority were young men and there were only three or four girls at the time.

One mother was very honest and explained that she hasn’t given her son much emotional support and he ended up spending all his time playing video games online because he had nothing else to do. She said it was a wake-up call for her and it was too late when she realized that it was hers and her husband behavior that contributed to that. She was full of regret. Chinese youth use computers at an Internet cafe in Beijing on June 18, 2005. (AP Photo/Greg Baker/File)

GJ: How do young people end up in these camps?

Fullerton: Parents sign-up their kids and they pay very expensive fees. The period they sign-up for tends to be six months, so if they are school age, they are actually taken out of school and usually miss an academic year.

There is a lot of resistance from the kids going in these camps, a lot of stories of kids literally being dragged in there. One mother drugged her daughter to take her to the camp.

Tao Ran, the head psychiatrist at China Youth Mental Development Base, also noted that sometimes they have to physically restrain them  to get them in the camp. Internet addiction disorder is associated with depression and a lot of the children in the center have been previously diagnosed as clinically depressed.

Many of them are being treated by doctors and psychiatrists for depression and other mental illnesses before them coming to the center. The parents tend to view it as a last chance. It is a quite drastic measure to take your kid out of school, and it is a very expensive, last resort step. A screen cap image of a patient at the China Youth Mental Development from the 2013 documentary "Web Junkies." (Courtesy image)

GJ: Who are the supervisors in the camps?

Fullerton: [Head psychiatrist] Tao Ran gives lectures about how evil the internet is, which he calls "electric heroin."

There are doctors who prescribe drugs, as a lot of the kids are diagnosed with mental disorders. There was a drill sergeant who was supervising me and they boys as well. He was in charge of the wing of a barracks. He was a fairly young guy, ex-army. He led the marches and the military exercises in the yard.

They claim there are incredibly high cure rates, around 85 percent, which they attribute to the hardness of the military-style training.

GJ: What was the daily routine?

Fullerton: When I arrived I did a couple of tests that the patients do on the first day. One of them was the EEC test. They attached electrodes to my head and they measured the electrical activity in the brain. They can do it to detect seizures but also they can do it to look for patterns that are associated with mental illness.

I also did a very long psychological test, which was answering questions designed to test my personality and again look for any indicators of mental disorders. I was asked if I have any violent tendencies, how I rated my sexual ability and all kind of psychological facts. These are the two main tests that patients go through when they enter. A screen cap image from the 2013 documentary "Web Junkies."

After the tests, we were in the main block where they have bunkbeds where I had a bit of free time. Then the drill sergeant blew the whistle and we all had to line up and to shout out "yes" when he calls your name. Then we went outside and got some marching exercises and sport in the yard. After that, the kids went to counseling sessions.

GJ: Did you encounter any violence in the camp?

Fullerton: Yes, there was definitely an element of violence there, but I don't believe there is the level of violence that has circulated in the media. I saw the drill sergeant punch one of the kids in the chest...The kid was misbehaving in one of the exercises... It was one of those strange situations where it was a hard punch and the kid kind of tried to diffuse the situation.

One of the kids told me that the drill sergeant tied him up by his hands and feet because he was acting up when he arrived. Tao Ran said that a lot of the kids used to be violent when they arrived. A huge number of the kids were also violent towards the parents and were very unruly.