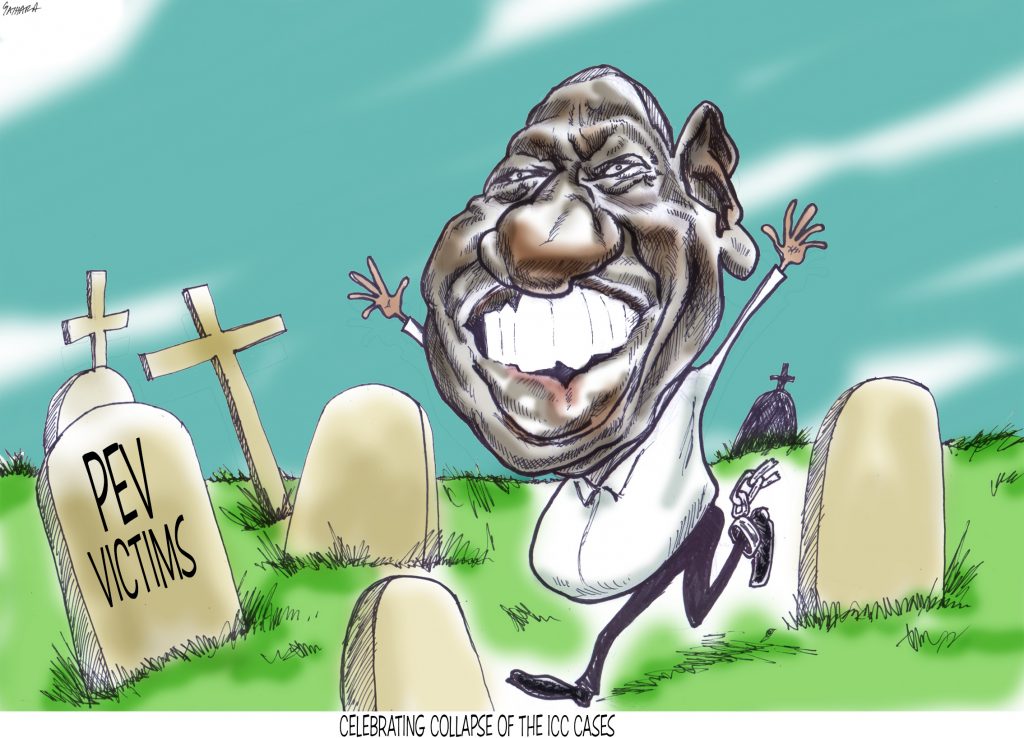 "A political cartoonist is always on the cutting edge of free expression, given that they are constantly making fun of powerful people."

Patrick Gathara came of age as Kenya began its transition to a multiparty democracy. Now, as one of Kenya's best-known cartoonists, he's working at a time when that democracy is under threat. After dropping out of university in 1996, he began cartooning for company newsletters. Five years later, he was running the Association of East African Cartoonists as Kenya readied for multiparty elections to replace its longtime president Daniel arap Moi. Since then he's become one of the country's best-known political cartoonists, and his work has been featured in The Daily Nation and The Star, two of Kenya's largest newspapers.

In addition, Gathara has turned his hand to blogging, and his political writing has been featured in international news outlets including the Washington Post and al-Jazeera. He's also currently a curator for the Kenyan news site, The Elephant.

Still, cartooning is how he made his name, and after Kenya's Supreme Court invalidated the country's August elections in a move that has stoked political tension, there's never been so much material. The ruling overturned a victory for incumbent President Uhuru Kenyatta's ruling Jubilee Coalition and forced Kenya's electoral board to schedule new elections. Those elections were thrown into doubt when opposition leader Raila Odinga recently announced he would not take part because the board had failed to make reforms that would make a new poll more credible.

Still, for Gathara the court's ruling was important in strengthening Kenya's faith in its institutions. "The laws were not the problem," says Gathara, of a country that also experienced disputed elections in 2007 and 2013. "It was the refusal to actually follow the law."

He spoke with Global Journalist's Astrig Agopian about cartooning at a time of political crisis. 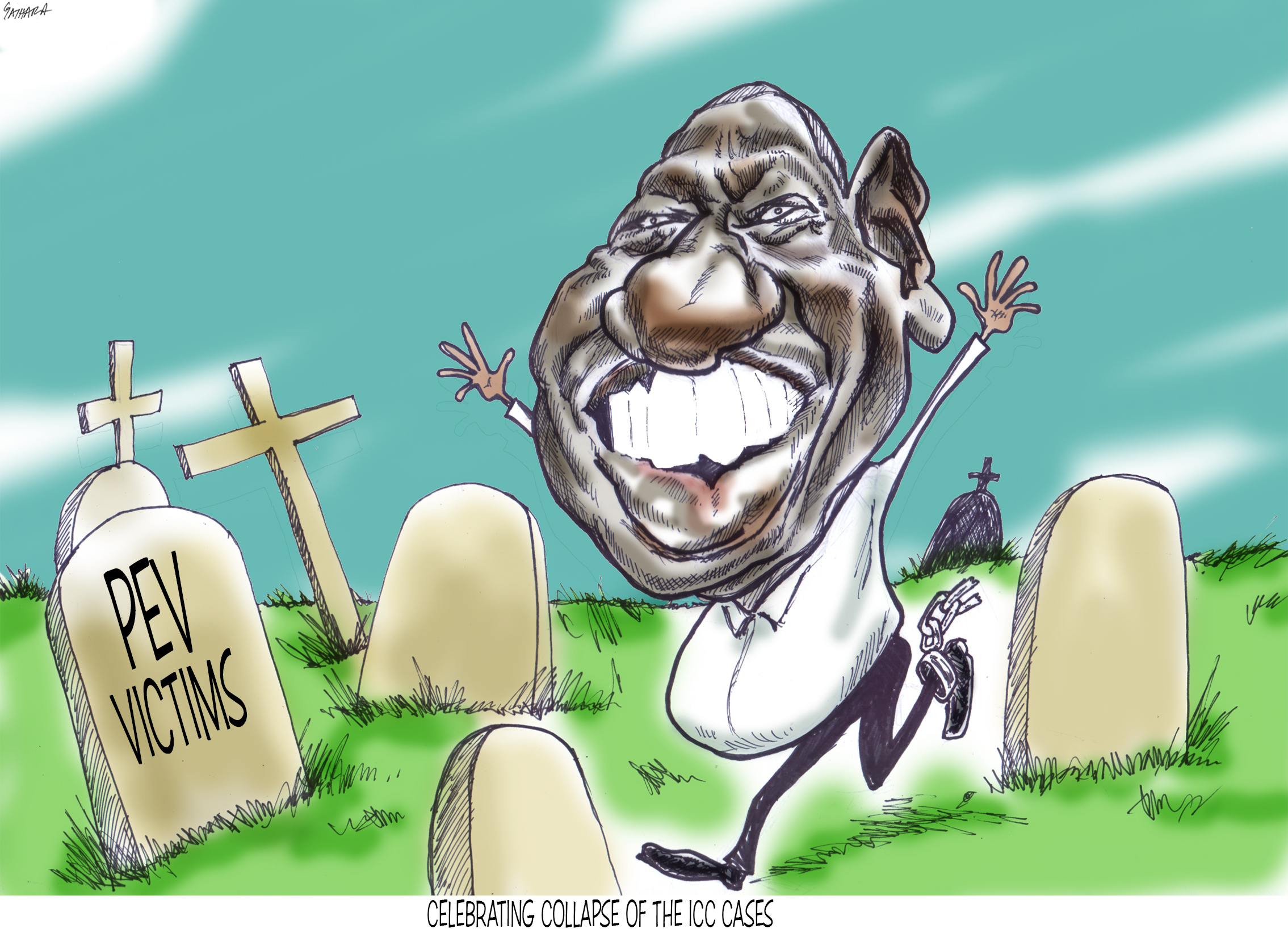 Kenyatta is shown among graves of those killed in 2007 post-election violence. (Gathara)

Kenyatta is depicted in front of ex-president Mwai Kibaki and Odinga. (Gathara)

Soldiers are shown in a reference to a 2016 attack on Kenya's El Adde base in Somalia. (Gathara)

Global Journalist: How did you become a cartoonist?

Gathara: I have been drawing pretty much since I can remember, since I was child. When I was a kid, it really was not considered a viable occupation to be a cartoonist. In Kenya, we have very few newspapers, national newspapers. At the time, there were three major ones.

Besides the fact that I was drawing, I had an interest in politics. The two seemed to come together in political cartooning. I did not really consider it as a viable choice of occupation, so I studied physics and math at the university. It is only after I dropped out that I decided to try my hand at pursuing cartooning. That was in 1996.

I started off with doing illustrations for company newsletters. I did that for about five years. In 2001-2002, I was running the Association of East African cartoonists, which I ran until about 2010. I used to organize exhibitions- and cartoon-related events. It was to sort of create space for other cartoonists to have a chance to show what they can do. GJ: How do Kenyan politics inspire you? What is the goal of your cartoons?

Gathara: I think cartoons are a very good medium to get people to think a bit deeper about the situation they are in. Cartoons are satirizing society and presenting a viewpoint, not just to laugh about it, but to think about the contradictions that are there and the stances that they take.

A political cartoonist is always on the cutting edge of free expression, given that they are constantly making fun of powerful people who do not particularly like it. Cartoonists tend to explain politics and society in the sense of taking really complex issues and being able to reduce them to a few cartoons, to a few drawings that people can understand and engage with. By doing that, it can actually help people contemplate it and think about these problems and not just having them as these big things that they are afraid of. 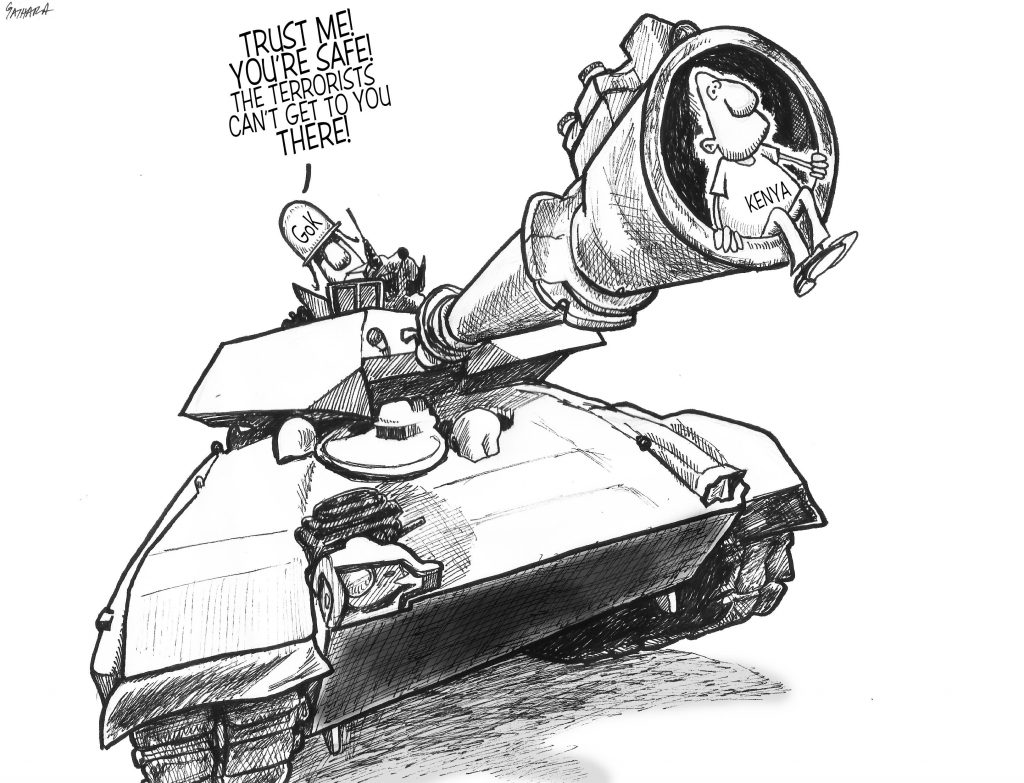 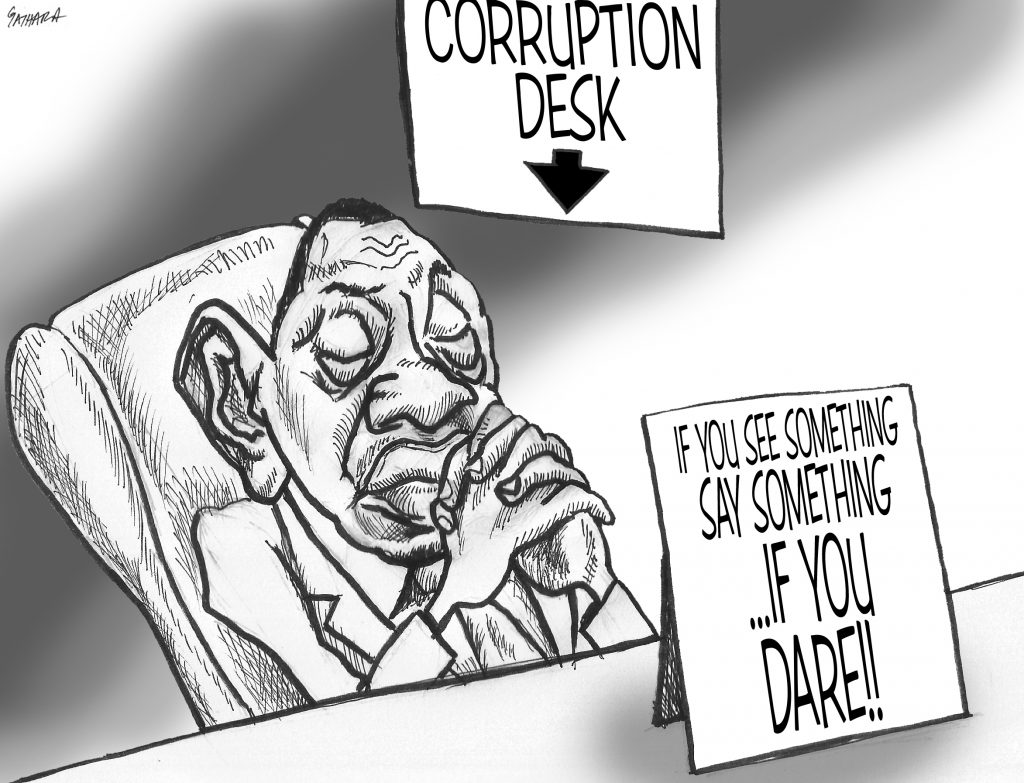 GJ: Have you ever been censored?

Gathara: There have been attempts to censor my work. I have never really been employed by the newspapers. I have been a contributor to them. I have always sought to keep my independence. My agreement with them has been that if they do not like a particular cartoon that I have done, then they would not run it. A lot of times, the most controversial cartoons, most people want to stay away from them. It is a real problem within the Kenyan press, self-censorship. Our government is one of the major advertisers of newspapers. According to some figures, up to 60 percent of advertising was, until recently, run by the government. That gives the government a lot of influence over the press.

The press is afraid to antagonize. There is a sense in which self-censorship is a big problem. That is at the editorial level. I had people from the state house call my editors directly to complain about cartoons. Some major cartoonists like Gado were fired from The Daily Nation essentially because the government did not like the work he was doing. So yes, censorship exits. Kenya is shown before the International Criminal Court, created by the Rome Statute. ICC investigations of President Kenyatta and Vice President William Ruto for their role in post-election violence in 2007 were dropped by the court after threats to prosecution witnesses. (Gathara/Daily Nation)

GJ: How does this election differ and how is it important for Kenya?

Gathara: It differs because this election was reversed. Beyond that, it is very much a continuation of others. We always had a problem with the credibility of elections. The most memorable was in 2007 when a dispute over the elections led to violence that killed over a thousand people. It was the continuation of problems we had since 1992 when multiparty politics was reintroduced.

Our biggest issue has been that we have not actually tackled problems that have been shown and unveiled. From 2007 to 2013, you see many of the same problems. The difference is that with the new constitution passed in 2010, it is no longer acceptable that we have elections that are run in very opaque ways. The Independent Electoral and Boundaries Commission now really has to stick by the rules that are put in place to ensure that the election is credible and transparent.

GJ: Are you optimistic about the future of Kenya?

Gathara: I am optimistic. What you see now are the possibilities that have been opened up by the new constitution. I am hoping to see more independent institutions take a cue from what the Supreme Court has done to assert its own independence, which is guaranteed by the constitution. But in practice, it does not seem to really follow it. When it comes to elections per say, it will be much more focused on how the elections are conducted as opposed to simply the outcome.