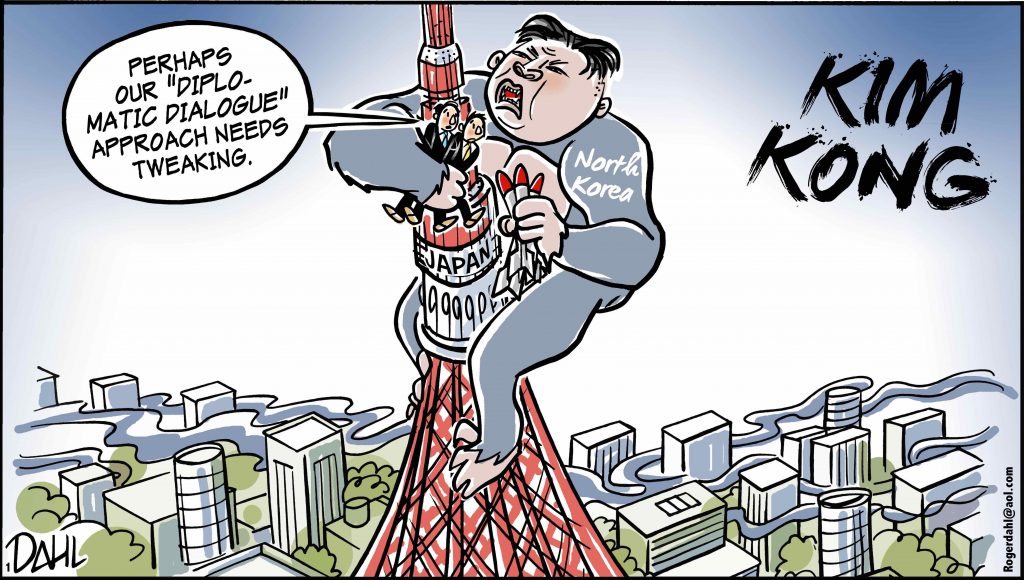 When Roger Dahl moved to Japan in 1989, he was like hundreds of other recent college grads - looking for adventure and funding it by teaching English. Little did he know this would be the gateway to a career that would place Dahl in the heart of Japanese domestic politics.

So enamored of Tokyo was he that during one of his school breaks in 1991, he put together a portfolio of drawings and sent them to four of Japan's major national daily newspapers. His portfolio was mostly comic strips, but he threw in one cartoon about the governor of Tokyo as a little add-on.

Dahl had long been interested in cartooning, and had worked for student newspapers at the University of Puget Sound and the University of Washington. Though friends told him he would never get a job by mailing his work out cold, he received job offers from two of the four newspapers he contacted.

He took a job with The Japan Times, the nation's oldest and largest English language daily. Dahl later found out that it was his "add-on" cartoon about the governor that landed him the offer.

After four years, Dahl left Japan for Seattle in 1995 to be closer to his family. To his surprise, The Times asked him to stay on. To this day, he continues to draw for the paper's editorial page. He also produces its long-running Sunday comic strip "Zero Gravity," about the trials of two young Americans trying to integrate into Japanese society.

Now 64 and in his 27th year with the newspaper, he spoke with Global Journalist's Rayna Sims about drawing Japanese political cartoons from Seattle's leafy North Beach neighborhood and the role of cartoons in Japanese society. Below, an edited version of their conversation: 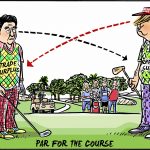 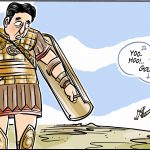 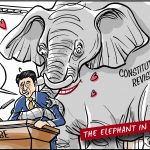 Global Journalist: Walk me through the general process of your work, from coming up with the ideas, through publication.

Roger Dahl: I first need a topic. So I’ll scan the newspapers [online] and try to find out what’s the biggest, most important issue of the day, or just the one that’s most interesting to me.

Because of my deadline structure, I have to be aware that the political scene might change before the cartoon gets published. I work about a week in advance...If something is extremely timely, I’m reluctant to use that topic.

Once I get the idea, then I just have to draw it, and I’ll do a lot of research for the drawing. Then I just bang it out – I do the sketch, and I ink it on a light box and scan it into my computer. Then I just get to finish the work and add the text balloons.

I’m pretty obsessive-compulsive about the cartoons. I don’t want anything to be wrong.  I don’t want to have any misspellings. I especially don’t want to get the story wrong, so I’ll be really careful with my wording. That’s kind of the process, it’s a lot lengthier than one might think.

GJ: What role do you think political cartoons play in society?

Dahl: I think a lot of people who are reading a newspaper will be more likely to look at a cartoon because it’s so brief, and it crystallizes an issue.

I mean that’s the way I would look at other cartoonists’ work – I should come away with an opinion or an image of an issue that crystallizes things. I think I can have an impact on people who might not want to go in depth as much as they should...I think getting a debate going and being a part of that debate is really valuable. 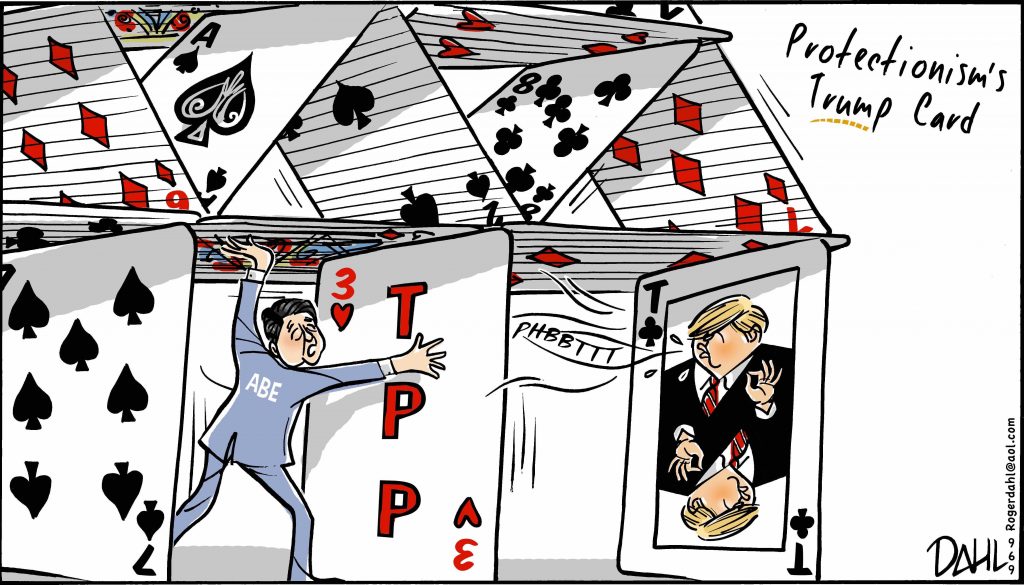 Japan has been hurt by President Trump's withdrawal from the Trans-Pacific Partnership trade agreement. 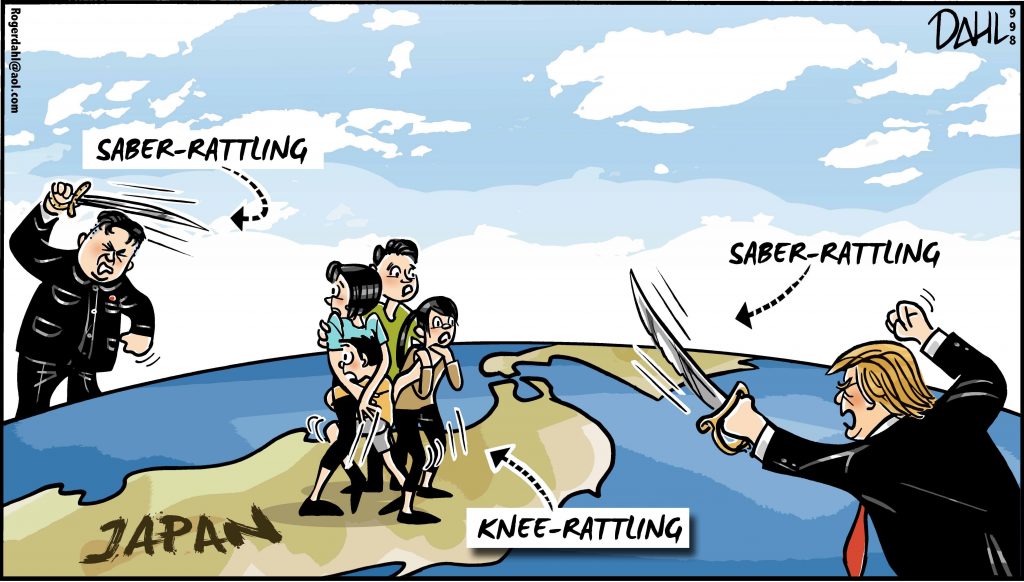 GJ: What is it like being an American creating political cartoons for a Japanese audience?

Dahl: I feel more constrained, just because I’m an American commenting in a different country. I have had a few people comment to my editor like, ‘why is this foreigner criticizing Japan?’ But, much to my editors’ credit, they’ve been supportive of me. GJ: Do you think the role of a political cartoonist differs whether you’re in Japan or the U.S.?

Dahl: I think there may be more reluctance in Japanese culture to invite controversy, but that's not to say the Japanese media are unwilling to tackle issues just as aggressively as Western media. However, I do feel editors would want me steer away from topics that might invite criticism for being insensitive.

The 2011 [Fukushima] nuclear plant disaster would be a prime example of an issue that needed to be addressed carefully. In America, I think cartoonists would probably feel free to comment, for example, on Hurricane Katrina or a mass shooting. In Japan the tradition would be only to comment with utmost sensitivity, especially if there have been casualties.

I think a lot of the difference is in how cartoons have been traditionally viewed in Japanese culture. My impression is that they are viewed more as entertainment – though there are some exceptions – rather than as serious commentary. Hence, some topics would seem to be inappropriate.