On July 9, 2015 (709), China arrested hundreds of human rights lawyers and activists. President Xi Jinping is depicted as a hunter with the heads of dissidents mounted on his wall. The chief justice of China's Supreme Court is depicted behind him. (Wang Liming/RFA)

They even put up a notice in the state paper, The People's Daily, denouncing me as a "pro-Japan traitor."

It was nearly midnight, and Chinese cartoonist Wang Liming (王立铭) had just returned to his Beijing apartment from dinner when he heard thunderous knocks on his door. He knew something was amiss. Within moments his suspicions were confirmed – it was the Beijing police.

That night in 2013 Wang was arrested and held in police custody for 24 hours. The reason: he was suspected of "causing a disturbance" by reposting a message about the Chinese government's poor response to flooding in the eastern Zhejiang province. "At that time, there was flooding at the city of Yuyao in Zhejiang and many villagers were affected," Wang says. "The Chinese government tried to send aid but they were inefficient. Many villagers and children died of starvation."

Wang, who goes by the pen name "Rebel Pepper" (变态辣椒), may have been targeted because he has over 1 million followers on Weibo, a popular Chinese social media platform. He is known for his satirical cartoons and outspoken criticism of President Xi Jinping's administration. The 2013 episode was hardly his first run-in with police and in 2014 Wang decided to relocate to Japan to avoid prison.

Today Wang is in the process of relocating from Tokyo to Washington, D.C. He spoke with Global Journalist's Dewey Sim about the difficulties of being a political cartoonist in China, a country that ranks 176 out of 180 on Reporters' Without Borders 2017 World Press Freedom Index.

Below, an edited version of their conversation in Mandarin: In April 2017, an interview on VOA with a Chinese tycoon who made allegations of high-level government corruption was cut short after objections from Chinese authorities (Wang Liming).

Global Journalist: How did you get started drawing cartoons?

Wang: I started doodling and drawing at a young age. It was almost innate for me.

When I was young, there were a few cartoonists that I looked up to. I particularly admired the works of Japanese cartoonist Tezuka Osamu. He was the one who created many internationally recognized works, such as Astro Boy. Another cartoonist that influenced me was Belgian cartoonist Georges Remi, who drew under the pen name Hergé. He was the one who started the cartoon series “The Adventures of Tintin.”

Drawing has always played a crucial role in my life, even when I was in the advertising and creative industry before switching to drawing satirical cartoons. First published in Newsweek Japan, the cartoon highlights Chinese protests over a book by the owner of Japan's APA Hotels. The book denied Japan's role in the Nanjing Massacre during World War II. Meanwhile China is depicted hiding a mountain of abuses by its own government under a red cloth, including the 1989 Tiananmen Square massacre. (Wang Liming/Newsweek Japan)

GJ: Why did you start drawing political cartoons?

Wang: It all started in 2009, when I had greater access to the Internet. I was reading and monitoring China's domestic news and politics closely and how they were affecting people. I realized that Chinese citizens were facing many issues. I ultimately concluded that the problems in China were all systemic, and stemmed from the Chinese government. If the Chinese government does not take things into its own hands, there will not be a solution to these problems.

I wanted to express these thoughts. I tried to put my thoughts down in words but was not able to express them fully. And so I decided to turn to drawing instead. My drawings about politics started to gain popularity online, and there were many “fans” who expressed support. So I started investing more time in drawing especially on topics regarding the Chinese government. GJ: When was your first encounter with the Chinese authorities?

Wang: In 2011 I drew a series of cartoon under the "One Person, One Vote to Change China" campaign to "One Person, One Vote to Change China," (Wang Liming)

I thought this campaign might give hope to Chinese politics, and I started drawing posters to support the cause. The cartoons went viral on Weibo, where over 200 million Chinese micro-blogged as the local elections took place. Some netizens even took the cartoons that I drew and printed them out and sold them across the country.

This attracted the attention of the Hunan provincial police and they started to arrest anyone who was selling these cartoons. They eventually tracked the cartoon to me, and interrogated me. The police felt that I was backed by some organization who was plotting against the Chinese government.

GJ: Why did you move to Japan?

Wang: In May 2014, I went to Japan with my wife for our holiday on a three-month visa. Just before our flight back to China, I realized that the Chinese government had deleted all of my social media accounts.

I was shocked. They even put up a notice in the state paper, The People's Daily, denouncing me as a "pro-Japan traitor." The ending paragraphs of the notice also urged authorities to arrest me.

I felt afraid to go back to China as it was a direct threat to my life. After talking to some of my friends who worked with the Chinese authorities, I found out that I was listed on the government's “blacklist.”

This blacklist also affected my wife and friends. My wife wanted to open a business in China, but the authorities found out that she was my wife and denied her application. For my friends, they applied for a visa to visit me in Japan. They booked their tickets and accommodations in Japan but when the day arrived, they did not turn up. When I checked with them, I was told that the authorities were monitoring our conversations and had them barred from going to Japan. I was devastated to know my wife and friends were directly affected by my actions. 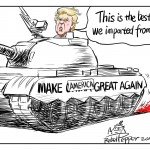 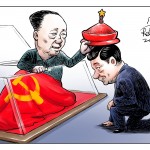 GJ: President Xi Jinping's administration rolled out a series of new media laws in 2014. What effect did they have on freedom of speech in China?

Wang: There were many laws rolled out which are not explicitly targeted at freedom of speech. On the surface, they would seem to be for the interest of national security, but they are actually all aimed at our freedom of speech. This is especially so that many journalists can be arrested for "causing a disturbance" to society.

They have a huge impact on me as well. If I return to China now, I will be charged and they would say how the cartoons that I've drawn are inciting public support to overthrow the administration.

Many of my friends who are artists and journalists also practice self-censorship because they do not want to get into trouble with the police. After several warnings from the police, they will usually stop drawing because they are worried about the safety of their families.

Wang satirizes China's practice of having arrested dissidents make televised "confessions" of their crimes through the use of coercion. (Wang Liming)

GJ: Why do you persist?

Wang: Over the past decade, the harm perpetrated by the Chinese government is beyond measure. Now, many issues are hidden from mainstream media. These include many human rights issues, as well as environmental issues. People who are not from China will never understand how bad the pollution is. The smog in Beijing is so bad that everyone feels hopeless.

This is why I am persistent – I want to use my cartoons to support any individual or organization that could pave the way for a different Chinese system altogether. I can’t imagine my life without drawing political cartoons.