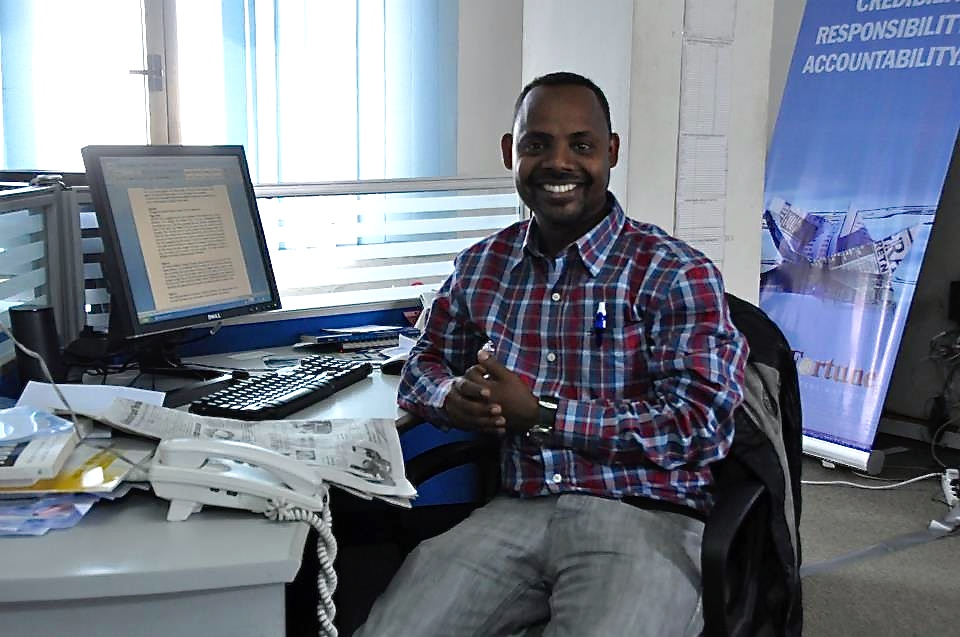 "I received warnings before the second attack. They start to tell me that I'm still 'offending' them."

Until late 2013 Yetneberk had been working as a reporter and then editor at Addis Fortune, Ethiopia's largest English-language weekly newspaper. Working as a journalist is dangerous in Ethiopia, which the Committee to Protect Journalists ranks as one of the top five countries in the world for journalists in jail.

Still, Yetneberk had reported on infrastructure problems and water shortages in the capital Addis Ababa. But what likely made him a target of the ruling Ethiopian People's Revolutionary Democratic Front was a 2012 interview Yetneberk did with opposition leader Asrat Tasse, in which Tasse was quoted as saying: "We are living under a dictatorial regime."

That kind of dissent is not tolerated in Ethiopia.

Yetnerberk received written and verbal warnings from authorities to stop reporting on such issues. Then he got caught in a crackdown on independent journalists ahead of the country's 2015 national elections that sent as many as 30 journalists into exile in 2014 alone, according to CPJ.

"[It was] at the same time, coming from work in the evening," he says. "One of them said: 'We don't give you a chance to be a hero by putting you in prison.' That's the only thing I hear. Then they start beating me."

Yetneberk was stabbed in the chest and severely beaten. When his family found him at a local hospital, they immediately checked him out for his safety and took him to the western city of Jimma, 160 miles (257 km) from the capital. After he recovered, he fled to neighboring Kenya in secrecy in November 2013 – hiding his escape from his co-workers and parents.

For the past three years, the 33-year-old has been living as an exile in Kenya. Yetneberk, who has since been joined by his wife, spoke with Global Journalist's Trevor Hook about his flight and his life as a refugee. Below, an edited version of the interview: A woman casts her vote in Ethiopia's general election in Addis Ababa, Ethiopia, May 24, 2015. The ruling EPRDF won all 546 seats in parliament after a campaign opposition groups said was neither free nor fair. (AP Photo/Mulugeata Ayene)

GJ: After you were attacked the first time, what did you do to try to protect yourself?

I received warnings before the second attack. They start to tell me that I'm still 'offending' them. Again, I report it to the police. But the case [wasn't] investigated.

GJ: Were you afraid things were going to escalate?

Yetneberk: Actually, I knew [something] will come next. I didn't expect I'll be attacked...but I was expecting an arrest or official court proceedings. I changed my location, and I had to work only in the daytime...I didn't want to go to the workplace during the evening.

The general election was coming, so they started blocking newspapers, blocking active journalists who are going to cover the situation. It was common. They do whatever they want at any time...

If you are trying to do some continual [coverage], they push you to exile. They might tell you: 'Go leave the country.' They'll open the door. GJ: Do you miss Ethiopia?

Yetneberk: I know why I am here. I am here because of a government that doesn't want any critics, or different opinions or freedom of press or speech. It is their system that pushed me out of the country, even put my life in danger...While this system is continuing, I cannot think about returning.

Even where I am living now, it is very challenging. I do journalism, I still cover daily reports from Ethiopia. But I still have a fear. I still have safety issues...I'm not stable here. I'm still a refugee.

GJ: Do you have advice for any other journalists facing exile?

Yetneberk: Free media [in Ethiopia] is not possible… they are not covering the issues of the people. They are still bound by the government’s content. Social media is very difficult in Ethiopia. The country is under a state of emergency. At this time, we are at least being recognized by some international organizations.

So we have to be a voice for the voiceless people, those who don't know what is going on. There are thousands of people being arrested. Those who are released are still telling stories. Their legs have been broken, their mind is worse. We see this on social media, but we need to bring this to light...We have to cover issues of human rights abuse in Ethiopia. Being silent, for me as a journalist, is not right.

Correction: An earlier version of this story said Yetneberk Tadele left Ethiopia in January 2014. It was November 2013.