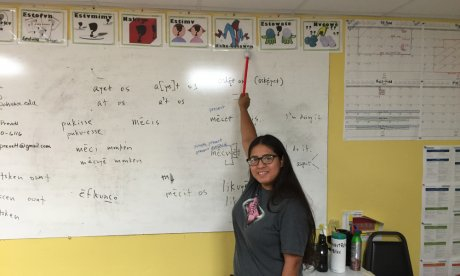 A student in a Muskogee Creek immersion class near Seminole, Okla. [Image: via National Endowment for the Humanities/Jack Martin)

"I made it my duty to learn as much of the language and culture as I could."

Melanie Frye's passion for the Muscogee Creek language began as a small child, when her father refused to speak it with her. Frye's father was fluent in the Native American tongue, also known as Maskoke. Yet he had a difficult time learning English – and he didn't want Melanie to suffer the same hardship.

His refusal only piqued Melanie's interest.

"One of the things my dad told me when I was 12 was that in 10 years the Maskoke language wouldn't be here anymore," she says. "When he said this, it stuck with me and while growing up I made it my duty to learn as much of the language and culture as I could."

In the 1500s, the confederated tribes of the Muscogee Creek were one of the largest Native American groups in the southeastern U.S. Their descendants include tribes referred to by later European settlers as the Upper Creek, Lower Creek and Seminole people. During the 1800s, treaties and forced removal by the U.S. Army pushed most Muscogee Creek peoples to settle in what is now Oklahoma. As with other Native American tribes, the use of the Muscogee Creek language declined in the 20th century as many children were sent to boarding schools where they were barred from speaking their indigenous language.

Today Frye is focused on growing the number of Muscogee Creek speakers from the roughly 5,000 who use it today.  After attending the University of Oklahoma and studying the language, she went to work for the Seminole Nation of Oklahoma and is working to re-open the Pumvhakv Immersion School for younger children outside Seminole, Okla. The hope is that by surrounding children with the language during the school day, they will eventually become fluent. Frye spoke with Global Journalist's Falyn Page about the challenges and opportunities in reviving a language considered "critically endangered."

GJ: You're trying to re-open an immersion school. What are the challenges?

Frye: The lack of teachers. We don't have enough teachers to keep the school going like we want to. Right now we are focusing on teacher training. With that, we have an organization that is working on training the younger people to learn how to teach the language and work with fluent speakers on their language proficiency.

GJ: When the immersion school was open, were parents hesitant about enrolling their children? ...Because we are in a rural area, one of our biggest issues was also transportation in getting students to school. [The parents] wanted to bring their kids but didn't have a way to get them there and back home.

GJ: How do you go about teaching?

GJ: What motivated you to be part of this effort?

Frye: My father spoke the Maskoke language too and was fluent. But he had a hard time learning English because he was a monolingual speaker when he was little. So he wouldn't speak to us growing up because he didn't want [us] to have that same hardship of learning English like he had. Even though my mother is also an English speaker, she wanted us to learn [Muscogee Creek] because her father also didn't speak too much to her growing up.

I went to the University of Oklahoma and they actually were teaching the language there, so I took some classes and learned more grammatical and cultural aspects of the language. I would go back to my father and tell him everything I was learning. This helped us build a closer relationship, because he could talk about the language to me and then talk in the language with me. I could pick up bits and pieces, so I just started working with different people who wanted to perpetuate and revitalize our language.