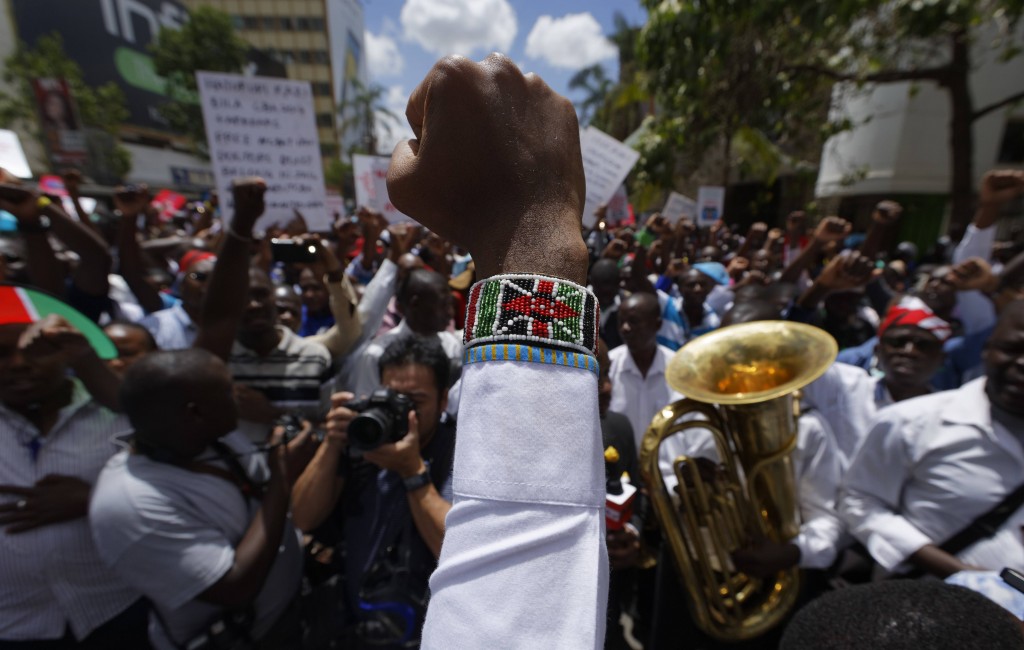 An activist wearing a beaded bracelet in the colors of the Kenyan flag holds his fist in the air as he and medical staff protest the detention of union leaders, outside an appeal court in Nairobi, Kenya, Feb. 15, 2017. (AP Photo/Ben Curtis)

"When you're the only doctor on the ground you can't take a break or even have lunch." Soon after Lyndah Kemunto finished medical school in 2014, she was working 60 to 80 hours a week as an intern at the Kisii Teaching and Referral Hospital in southwest Kenya. Worse than the hours, she was overwhelmed by the number of babies she was assigned to deliver.

"When I was an intern, I had between six to ten maternal deliveries per day," she says. "Sometimes those numbers were tripled....When you're the only doctor on the ground you can't take a break or even have lunch."

By December, she and 5,000 other physicians in the East African nation's public health system were so fed up with working conditions they went on strike–effectively closing many of the country's hospitals. At issue were long hours and doctors' complaints that President Uhuru Kenyatta's government had failed to give them pay raises promised in 2013.

After three months of negotiations, the walkout ended last month with the government agreeing to raise annual salaries by at least $6,000 annually, according to data from Deutsche Welle. Before the raise, new doctors earned a minimum of about $14,000 per year.

But the walkout came at a cost:  during the strike, Kenya's media was filled with stories about people dying for lack of medical care. The reports included stories like that of Dismas Bikundo, whose wife lost a baby girl that would have been their firstborn after being denied obstetric care at two hospitals, according to the Los Angeles Times. In one case in western Kenya, a security guard was forced to assist a woman giving birth, according to Kenya's Daily Standard newspaper. “I’d tend to believe that a lot of people died in the villages,” Kemunto says, of the public harm caused by the strike. “I felt sad for the Kenyans who weren’t able to access public services. But I equally felt that I needed to fight for them, so that when I came back to work they could have better conditions. At that point in time my mind was focused [on] the greater good rather than on the collateral damage.”

Beyond pay for doctors, it's unclear that the strike did anything to improve healthcare for ordinary Kenyans or working conditions for medical staff. To be sure, Kenya has many more doctors than most African nations and at 61, life expectancy in the nation is higher than 30 African nations in spite of being one of the worst-hit by the HIV epidemic.

Yet the corruption that is a scourge in other areas of Kenya's government has also damaged the healthcare system. An audit report that became public last year found that $48 million had been stolen or paid to fake companies in the previous year.

"Money meant to be for supplies and commodities often never arrives," says Kemunto, who now works at the Iyabe District Hospital, about 300 km (186 miles) west of Nairobi. "Corruption in Kenya is too [wide]spread. It won't change overnight. It's not even something just in the highest levels of management in the country. It goes down to the basic level of citizens." In this photo taken, Jan. 9, 2017, pregnant woman Sharon Andisi, 23, crouches down outside the Pumwani Maternity Hospital, after being turned away because of a month-long strike by state doctors, in Nairobi, Kenya. (AP Photo/Khalil Senosi)

That is a body blow to doctors on the front lines like Kemunto, who says that she is frustrated seeing patients die for lack of medicine that is relatively inexpensive.

"You see some children die because of the lack of drugs in the hospitals," she says. "We have a lot of patients with malaria, which is very easy and not that expensive to take care of, but when we write a prescription, a lot of the pharmacies don't have the medicines."

She says that at her hospital rooms are mostly clean, but that the government health service sometimes has difficulty getting the right personnel with the right medical equipment. "We had good machines, radiology machines," she says. "Some of them have been unattended, because there is a lack of specialized doctors who know how to use them."

It's possible some of these issues may be addressed after national elections in August. But Kemunto says she's not expecting big changes any time soon. "One day we'll get the best healthcare that we possibly can, but it will take long," she says. "The greatest lesson from the 100 days strike is that the system in Kenya is broken. At least we were able to stand up and point to the people who are doing something wrong."