Indonesia's struggle to save tropical forests 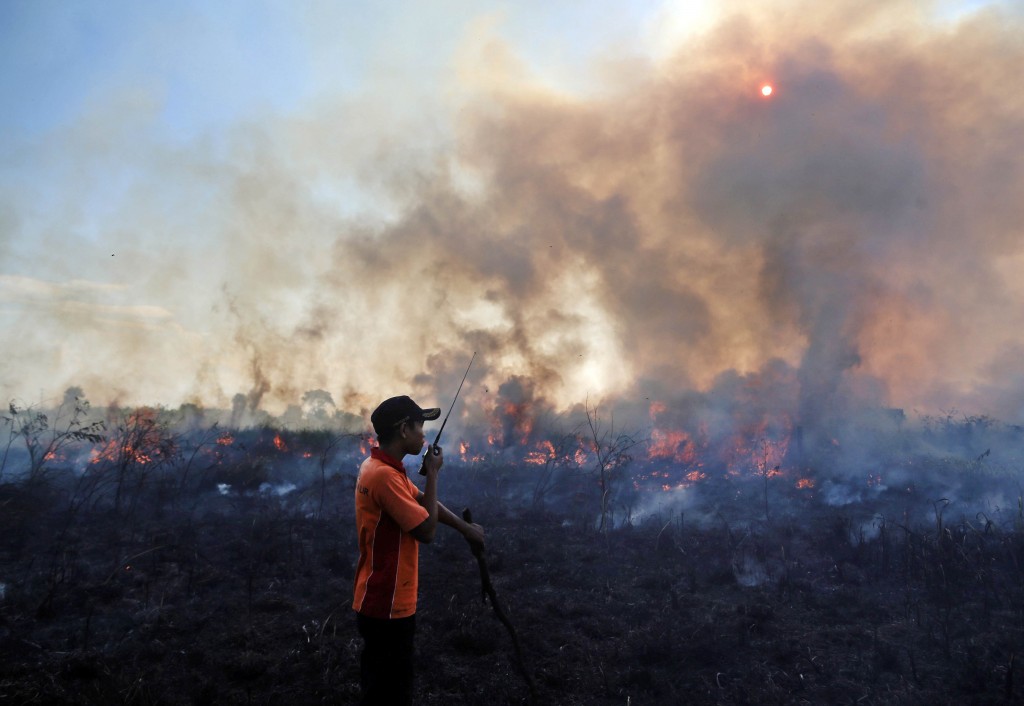 A fireman talks on his walkie-talkie as he and his team battle peatland fire on a field in Pemulutan, South Sumatra, Indonesia on July 30, 2015. (AP Photo)

A new book highlights possible answers to deforestation in the tropics.

Preventing climate change is often linked to cutting back on the use of fossil fuels. Yet the clearing of carbon dioxide consuming tropical forests harms the atmosphere nearly as much as the annual greenhouse gas emissions of the world's two top polluters: China and the U.S.

Slowing this process should be easier than cutting fossil fuel consumption from cars and power plants. Yet in some tropical countries like Indonesia the rate of deforestation has actually increased in recent years. Indonesia alone lost at least 4 million acres (1.6 million hectares) of forest cover to palm oil plantations in between 2000 and 2010, according to research published by the journal Conservation Letters. Loggers and other agricultural interests added to that total, and contributed to the burning of Indonesia's carbon-rich peatlands. This problem is the subject of a recent book Frances Seymour and Jonah Busch of the Center for Global Development, a Washington, D.C. think tank. In "Why Forests? Why Now: The Science, Economics and Politics of Tropical Forests and Climate Change," Seymour and Busch examine why deforestation continues despite scientific, economic and political incentives to end it.

In an interview with Global Journalist's Safiya Sadyr, Seymour says that one problem is that the benefits of tropical forests are poorly understood not only by the general public, but even by climate experts and international development agencies. Still, she argues that there is reason for hope that this may change.

Global Journalist: There are strong indigenous communities in Indonesia. What role do they play in the preservation of the forests?

Seymour: Research indicates an association between the presence of indigenous people and the conservation and continuation of the forest cover. There was just a very recent article saying that indigenous people [in Peru] with legal rights to their forests do a better job of conserving them, compared to other possible forest protection models.

In Indonesia, in particular, it’s only been very recently that indigenous people had the political space to advocate for their interests... [Recently] there was an invitation from the president to indigenous communities to submit maps of their indigenous territories, which previously were not recognized by the government as legal.

That process has started [the] gradual increasing of legitimacy of indigenous people's land claims. In late December, the president himself designated the rights of nine customary forests in Indonesia...that AMAN [an indigenous organization] had successfully sued for. That process of recognizing indigenous communities is very active in Indonesia right now. A worker uses chainsaw to cut an acacia log during an area clearing in central Sumatra, Indonesia, on April 30, 2008. (AP Photo/Achmad Ibrahim)

GJ: Indonesia doesn't have a very good record of stopping deforestation. What steps is the government taking now, and are they working?

The Indonesian government also proposed a moratorium on new [logging] licenses on peatlands and primary forests. There were questions on how rigorously some of these policies were enforced or how slowly they moved forward. But forest fires in late 2015 and their aftermath really caught the attention of [President] Joko Widodo's administration and they took some more steps, including to extend the moratorium on new licenses and put out new presidential regulations on peatlands. He set up a new national agency on peatland restoration and in the works is a new presidential regulation related to the licensing of oil palm.

None of these steps have yet translated into a significant decrease in deforestation, but those are steps in the right direction.

GJ: Clearing forests for palm oil plantations is a major cause of deforestation. But palm oil exports generate $17.8 billion for Indonesia's economy. What are ways to preserve forests without causing too much economic harm?

Seymour: One of the eye-opening results of the fires of 2015 was the economic aftermath. There was a report prepared by the World Bank that estimated that those fires cost the Indonesian economy about $16 billion. So the costs of the fires are the of the same magnitude as the benefits from the oil palm. People are beginning to realize that you have to balance out economic benefits of the forest conversion with the economic costs of fire degradation.

GJ: What prompted you to write this new book?

Seymour: [Co-author] Jonah and I strongly believe that the tropical forests are an under-appreciated solution not only to preventing climate change but also to achieving sustainability goals.

Even if you set aside the climate impacts, tropical forests provide all kinds of benefits, ranging from direct forest products that are enjoyed by local communities, but even the ecosystem services the forests offer other than carbon storage. In particular,  provision of clean drinking water helps with irrigation. New sciences show that tropical forests can even regulate the rainfall.