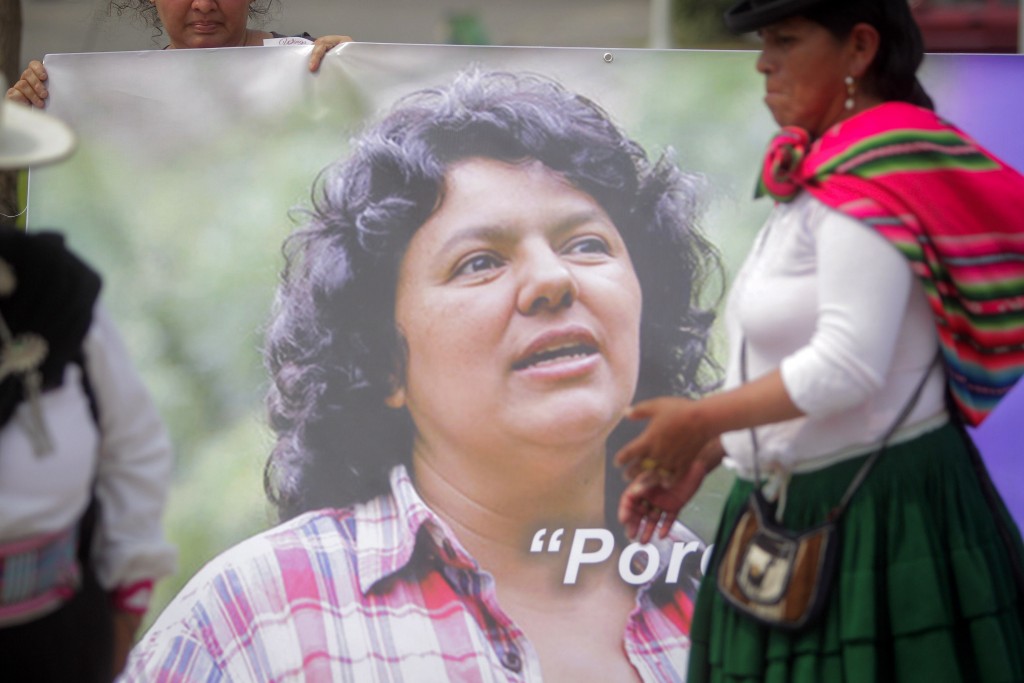 "The government doesn’t want to get to the bottom of the killing because it involved people from the government itself."

Silvio Carrillo always knew that there were death threats against his aunt, the Honduran environmentalist and indigenous rights activist Berta Cáceres. But her death just over a year ago was still devastating.

Cáceres was shot dead by gunmen who broke into her home in Honduras on March 3, 2016. Her killing came on the eve of her 45th birthday and less than 11 months after Cáceres had won the prestigious Goldman Environmental Prize for her efforts to block the Agua Zarca dam project on Honduras's Gualcarque River.

Despite the brazenness of her crime, her murder wasn't exactly a surprise. As news outlets including the New Yorker have reported, Caceres had told Honduran authorities numerous times that she had been threatened. Since her death two other activists from the group Cáceres founded, the National Council of Popular and Indigenous Organizations of Honduras group (COPINH) have also been killed. The deaths are part of a growing number of killings of environmental activists in Latin America. In 2015, 185 activists were killed globally – and nearly two-thirds of those were in Latin America.

At least eight people have been detained in Cáceres' killing, including two staff from the politically-connected Honduran company overseeing the dam project as well as an officer in the Honduran army. Honduras' government is urging prosecutors to continue their probe, CNN reports. But for Carrillo, a freelance journalist based in Oakland, Calif., there are still unanswered questions about the involvement of Honduran government officials in her killing. He also criticizes U.S. support for President Juan Orlando Hernández's government. “She was a hero," he says. "She was going to make a change.”

Carrillo spoke with Global Journalist's Jinghong Chen about the anniversary of his aunt's killing and the continuing violence against environmentalists in Honduras.

Global Journalist: Tell us about how your aunt got involved in this kind of work?

Carrillo: She has been fighting for years [for] the Lencan indigenous people in southwestern Honduras. My grandmother [Cáceres' mother] was a midwife. She was the only one who provided medical care for much of the indigenous community that lived nearby. So [Cáceres] saw all what was happening to these people...since she was very young. She witnessed how they live, how they die, how they eat.

GJ: Are indigenous people and environmentalists being targeted by the Honduran government?

Carrillo: It is targeting their land, so by default because they are the ones that live on the land, they end up being the target. This is what happened with the dam, the dam was [to be built] on the indigenous land and the government violated its own law...[that] you have to consult with the indigenous people before you take their land. The government didn't do that. In fact they lied. They forged a document saying that they have done that. The mayor and a couple of other people that are involved are paid by the dam. And some of these people that were involved in the dam are government officials.

GJ: When you heard about the killing of Berta, what was your reaction?

Carrillo: First of all, there is a bit of history of this kind of thing in my family. My grandfather who I was named after was also killed by people related to the government when my mother was two years old. So we had a history of fighting against the government. The government supported by the U.S. keeps taking our lands [and] our rights. I wasn't surprised, I was disappointed...because I knew she has four children.

GJ: Tell us about the threats against her before her death.

Carrillo: Not just threats, she was also arrested. The government and the police made up charges and charged her with owning a gun. That was thrown out [in court]. She [had] received between 30 and 40 threats, which were in person or via phone calls or emails since 2013.

There were some varieties of threats: from people who were [providing security for] the dam, a lot of them were actually police or military, as the company [that] owned the dam was paying police and military to be security. There was a physical threat to her life in person as well. A lot of threats sometimes just came anonymously, but some of them were [from] people she knew that she had repeated run-ins with at the dam.

GJ: What's your view on the investigation of her killing?

In the very beginning, they screwed up the investigation. They trampled all over the house the night of the murder, they ransacked the house, and they left it in a disaster…They destroyed all the evidence on purpose. We have no trust in them. Honduras has 95 percent impunity rate. So why would we think they are able to conduct a proper investigation? So that's why I [have been] calling for an international independent investigation.

They have arrested eight people and...they are just the ones [who] got paid to kill her. They are not the ones that commanded this to happen.

[Because of] a secrecy law, we don't have any access to the investigation or anything they've done. In the constitution, it says that we have the right to conduct our own investigation...but because [of] the secrecy law, they have kept us from finding out any information they have. We know nothing.

Carrillo: There was an offer from the Inter-American Commission on Human Rights to conduct the investigation but the Honduras government refused to let them in.

GJ: How are environmentalists being portrayed in the media?

Carrillo: Generally not very well, for one thing the media is controlled by the business elite. So the media is controlled by the wealthy, and they don't care about what the indigenous people's needs are. If they are highlighted, it's always in a negative way, saying that the indigenous people are stopping progress. There were even some [members of] congress [who] said my aunt was impeding progress before she was killed. But the progress is for whom?

GJ: Is the Agua Zarca dam still being built even after Berta's death?

Carrillo: Nothing has stopped. The funding is suspended, but not all of it. There are still countless projects in indigenous communities...they will never stop, they will always continue.