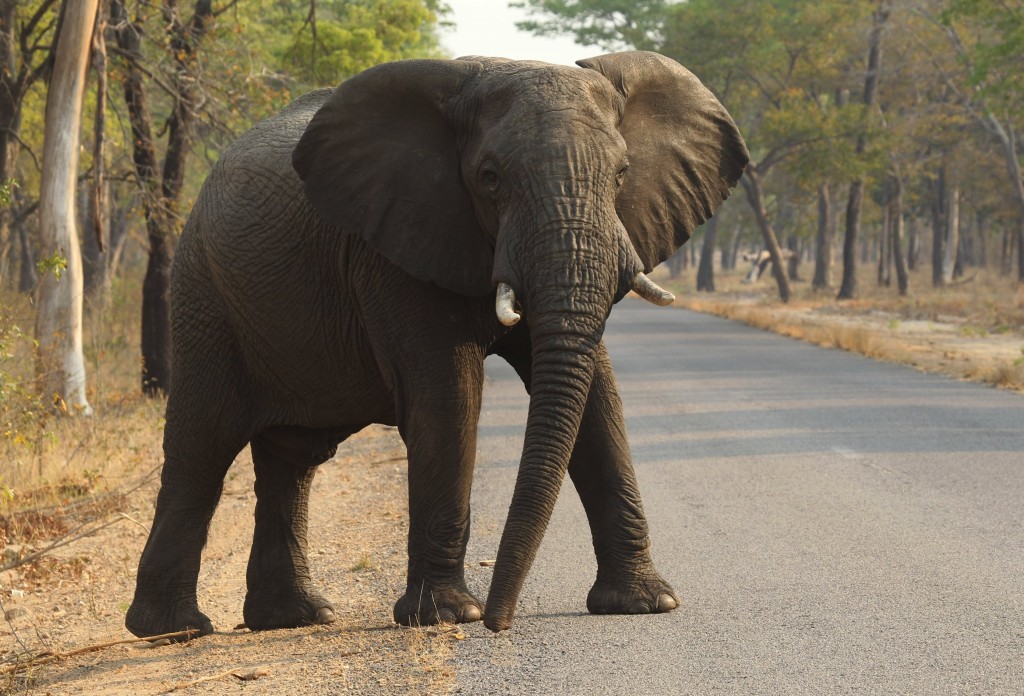 An elephant in Hwange National Park in 2015. (AP Photo/Tsvangirayi Mukwazhi)

"[We] were being hunted by very senior police officers mandated with protecting wildlife."

After Zimbabwe's Sunday Mail published a 2015 report revealing the involvement of police and wildlife rangers in a poaching syndicate that poisoned 22 elephants in a single day, the government response was immediate.

A day after the article came out, both reporters on the piece as well as Sunday Mail editor Mabasa Sasa were arrested on charges of publishing falsehoods.

Most sensitively, the report in the state-owned newspaper said that one of Zimbabwe's top police officials being investigated for involvement in an Asian crime syndicate that had organized the mass-killing of elephants in order to export their tusks. The elephants died after cyanide used in gold-mining had been used to poison watering holes in Zimbabwe's Hwange National Park–a method used by poachers to kill hundreds of elephants in recent years in the country's largest game reserve. Sasa and the other two journalists who reported on scheme, Tinashe Farawo and Brian Chitemba, were released on bail. But more than a year later, they remain in legal limbo. Sasa says that the state's witnesses against them "more or less admitted that they had no case," yet the court turned down their application for acquittal. Sasa and his co-defendants have appealed that decision.

In an e-mail interview from Harare, Sasa, 34, told Global Journalist's Edom Kassaye Gelan of his prosecution and how corruption fuels the international trade in ivory. Below is an edited transcript:

Global Journalist: How do you measure the effort the Zimbabwe government has put into protecting wildlife, especially the elephants?

Mabasa Sasa: The Zimbabwean government has come up with fairly good conservation policies over the past three decades.

A good example is the CAMPFIRE project, which is an initiative to get rural communities to directly manage flora and fauna and benefit from their participation.

This is important as one of the major hindrances to natural resources management has always been getting local communities to appreciate the broader objectives of conservation. CAMPFIRE was subsequently adopted and adapted by countries such as Namibia.

However, over the past ten years, CAMPFIRE has suffered from a lack of investment.

The wider economic deterioration affecting Zimbabwe has hit the management of natural resources hard. The dwindling financial base means lower investment by the state in conservation issues, less security of national game parks and increased poaching by both local communities and sophisticated transnational syndicates. A photo made available Sept. 30, 2013 shows remains of a dead elephant that died after licking poisoned sand from a salt lick which poachers poisoned with cyanide in Zimbabwe's Hwange National Park. (EPA/Aaron Ufumeli)

GJ: Can you explain how corruption affects Zimbabwe's elephant management?

Sasa: Zimbabwe’s elephant management system is technically quite robust, to the point where the population of African elephant has ballooned over the years such that state officials now say the country has surpassed its carrying capacity.

This has created a huge stockpile of elephant tusks under state custodianship as these cannot be sold because Zimbabwe is party to CITES [an  international anti-poaching treaty] and its attendant restrictions in trade in elephant ivory.

There have emerged reports of some of these stockpiles being looted, and general arrests are made in connection with this.

More worrying is the headway – or lack thereof – in dealing with sophisticated transnational syndicates that systematically target elephants for poaching.
Authorities have been robust when it comes to tackling [poaching ]by less well-organized groups and rural villagers who poach. There has never been – to the best of my knowledge – any prosecution of a senior state official in connection with poaching.

While some may point to this as an indication of non-participation by state officials in poaching, we have come across not insignificant information that senior figures have indeed been involved in organized transnational poaching rings.

Further, there is realistically no way that tusks from elephants poached in Hwange [could] find their way to Harare International Airport, a distance of more than 800km, [with] up to ten police checkpoints, without authorities being aware.

And how do they get through the airport and to Southeast Asia without official involvement at some level? It just cannot hold that all this happens without someone high up facilitating movements.

Attempts to expose this have been met by stiff action against journalists by the police. GJ: What was your role in exposing the corruption inside police concerning elephant poaching?

Sasa: The publication I work for has an investigations desk headed by an investigations editor. It is through this desk that we have published the case of at least one assistant commissioner of police being involved in a transnational syndicate.

In the Zimbabwe Republic Police structure, an assistant commissioner is the fifth-highest ranking officer in the force. This one in particular was once in charge of a region hosting one of southern Africa’s highest elephant populations, and he stood accused of using his position and police resources to facilitate movement of tusks of poached animals.

A few hours after publication of the story, the Investigations Editor, a junior reporter and I were being hunted by very senior police officers mandated with protecting wildlife.

We were arrested 24 hours after publication and held in police cells for two days. The trial went on for more than a year, but we have been temporarily freed pending determination by the High Court on whether or not the matter should continue.

The publication of the story and our subsequent arrest, I feel, helped raise awareness – locally and internationally – about the very real problem of alleged official involvement in such criminal activities. This was particularly so because our newspaper’s shareholding is majority-held by the government.

Any publicity around the important issues of conservation and corruption is always welcome as it helps spur action towards improving systems and attitudes at individual, organizational and state levels.

GJ: What impact does your detention have on your commitment to reporting on issues of corruption and elephant poaching?

Sasa: Naturally, it emboldens me to see through such issues to their logical conclusion – which is the arrest of those involved and an improvement in wildlife management systems.

Unfortunately, one of the conditions of our being released from custody pending the outcome of our trial was that we are not to “interfere with witnesses.”

This means we are hamstrung and cannot publish follow-up articles on the nature of the syndicate that our publication was investigating until the courts have cleared us.

GJ: Did you ever receive threats after your detentions?

Sasa: I am not at liberty to answer that question at the present moment.

GJ: Did you know the risk of this in-depth reporting over elephant poaching?

Sasa: As in any attempt to uncover lucrative criminal syndicates or corruption by powerful officials, the risks to a journalist personally and professionally are high. However, it is a war worth fighting.

GJ: China recently announced it would ban the trade in ivory. How might this affect Zimbabwe?

Sasa: China is said to be the destination of much of the poached ivory from southern Africa. So any ban in China augurs well for wildlife management in Zimbabwe. Further, China is known to aggressively pursue policies when it puts its mind to something, so stringent enforcement in China will certainly hit poaching syndicates hard and will also eliminate a lucrative market for criminals.