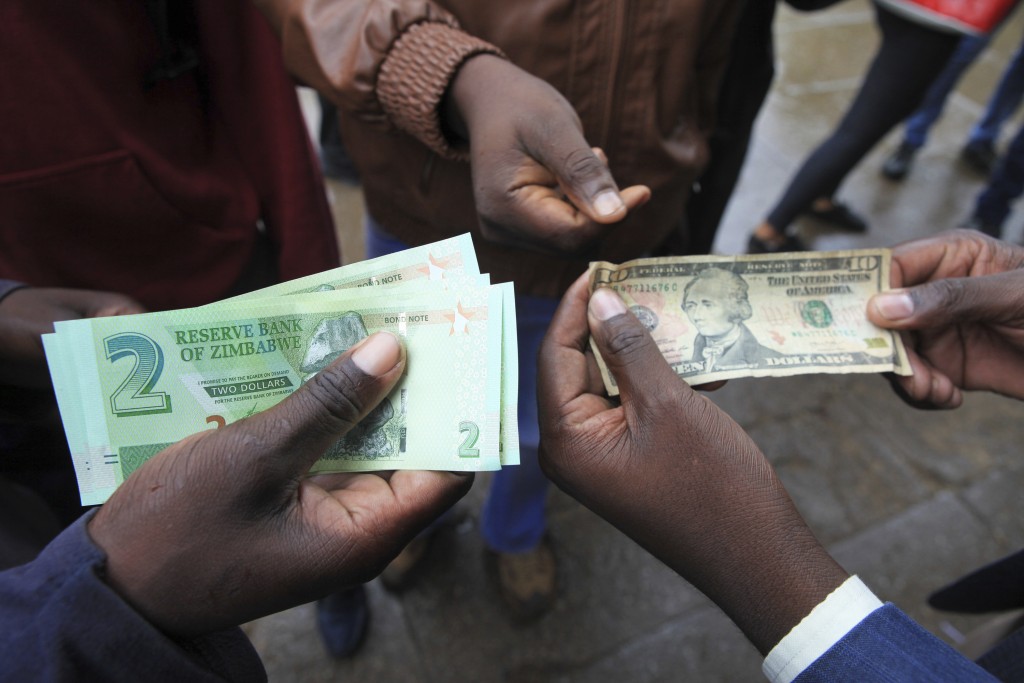 Zimbabweans compare the new note with the US dollar note following the introduction of new notes by the Reserve Bank of Zimbabwe in Harare, Monday, Nov, 28, 2016. (AP Photo/Tsvangirayi Mukwazhi)

After rebounding from one of the most spectacular episodes of hyperinflation in human history, Zimbabwe risks new economic turmoil as it issues a new “bond note” currency meant to stave off a shortage of dollars.

The southern African nation replaced its own currency mainly with the U.S. dollar in 2009 after inflation hit as much as 500 billion percent annually in late 2008. That helped quell inflation and led the economy to expand more than 10 percent annually from 2010 to 2012. An elderly man holds a placard while begging on the streets of Harare, May 9, 2014. (AP Photo/Tsvangirayi Mukwazhi)

Facing a shortage of dollars in late 2016, Zimbabwe has started issuing a form of currency called a “bond note.” The new currency is pegged to the U.S. dollar and is theoretically redeemable for dollars at banks. It’s meant to alleviate some of the stress put on the economy from a shortage of hard currency.

But but many fear it is a step towards a return to the Zimbabwe dollar, which was valued at 1.47 to 1 with the U.S. dollar when it was introduced 1980. In 2015, the government sought to retire old Zimbabwe dollar accounts by offering one U.S. dollar per 35 quadrillion local currency units.

“Through the back door they have contaminated the dollarized system and now it’s kind of a mixed system,” says Steve Hanke, an economist at Johns Hopkins University who has studied Zimbabwe’s hyperinflation, in an interview with Global Journalist. “The issue of the bond notes has created big problems because it’s essentially created a bank run on dollar notes. People are afraid that they are going to go back to using the Zimbabwe dollar and so they try to get as many U.S. dollars as they can.”

The new “bond notes” are likely to add to distortions in an economy struggling to recover from years of economic mismanagement. The country’s economy contracted by 0.3 percent in 2016 and is forecast to shrink 2.5 percent this year, according to the IMF. About 4.1 million of the country’s 14 million people are expected to be “food insecure” during Zimbabwe’s “lean season” this year, according to the U.S. Agency for International Development. Phai Munaingo, left who lives with his family of four children in a one room makeshift home in Epworth, near Harare, Zimbabwe, pictured in October 2008 during Zimbabwe's last bout with hyperinflation. (AP Photo/Tsvangirayi Mukwazhi)

The dollar shortage and economic crisis has also contributed to an ongoing credit crunch. “I sold a house last year in Zimbabwe,” says Charles Mudede, a Zimbabwean journalist now living in Seattle. “I got to sell it as an estate for our parents and we sold it for almost $500,000 dollars and the person had to show up with cash in the bank because there’s no mortgages.”

The new “bond notes” already have a street value of as little as 70 percent of their face value just three months after introduction, according to Bloomberg News. That’s stirred memories of the hyperinflation of a decade ago.

“I talked to friends at the Royal Harare golf course where I had a membership at one point and if you went to the golf course and ordered a beer [during the hyperinflation era] and if you didn't pay for it right away- if you waited until you made the turn- your beer was a different price,” says Charles Ray, former U.S. ambassador to Zimbabwe, in an interview.

Zimbabwe was once referred to as the breadbasket of southern Africa. The country had one of the best health and education systems in the region. But its economic decline accelerated after 2000 when President Robert Mugabe’s government initiated a “fast track” land reform program where pro-Mugabe militias seized white-owned commercial farms for land redistribution. The intent was to empower Zimbabwe’s black majority, which faced systematic discrimination prior to independence. Zimbabwean President Robert Mugabe inspects the guard of honor during an opening of parliament in Harare, Oct, 6, 2016. (AP Photo/Tsvangirayi) Mukwazhi)

An estimated 4,500 white Zimbabwean farmers were dispossessed, clearing the way for tens of thousands of black Zimbabweans to resettle. But those who received land were often inexperienced in farming and unable to access funds for machinery.

Those with political connections faired well. One study in 2010 found that Mugabe distributed  nearly 40 percent of the land from the program to himself and his allies. It found that cabinet ministers, military and government officials owned about 12.5 million acres of the most fertile farmland in Zimbabwe. Mugabe himself was cited in the investigation as owning 14 farms.

The program resulted in a sharp decrease in agricultural production. In 2000, agriculture accounted  for about 36 percent of Zimbabwe’s GDP according to New Agriculturalist. Ten years later, farm output was just 19 percent of GDP.

Mugabe has “essentially destroyed the economy,” says Hanke, of Johns Hopkins. “Property rights are very tenuous. In Zimbabwe, depending on who you know, you can either keep your farm or lose it for political purposes.”

Meanwhile Zimbabwe's government  has blamed Western sanctions for its economic woes. Those sanctions, imposed in 2002 in response to the ruling Zanu-PF's campaign of violence and intimidation ahead of elections, were recently renewed by both the U.S. and European Union.

But Mugabe's government has recently shown renewed interest in engaging with the West in order to get desperately needed aid and loans. Last year it repaid debts to the International Monetary Fund, a first step towards accessing international credit. But other debts still remain, and new loans will likely be conditioned on economic and political reforms.

However, some say that none of these reforms will come until the 93-year-old is out of the picture. Even then, reform will be a difficult task.

“The entire economy was sacrificed to maintain power for Zanu-PF,” Mudede said. “This is the kind of economy we’re going into when Mugabe dies, one where banks don’t loan money, there’s no mortgages, no health insurance, and where do you start?”

with Trevor Hook and Jason McLure