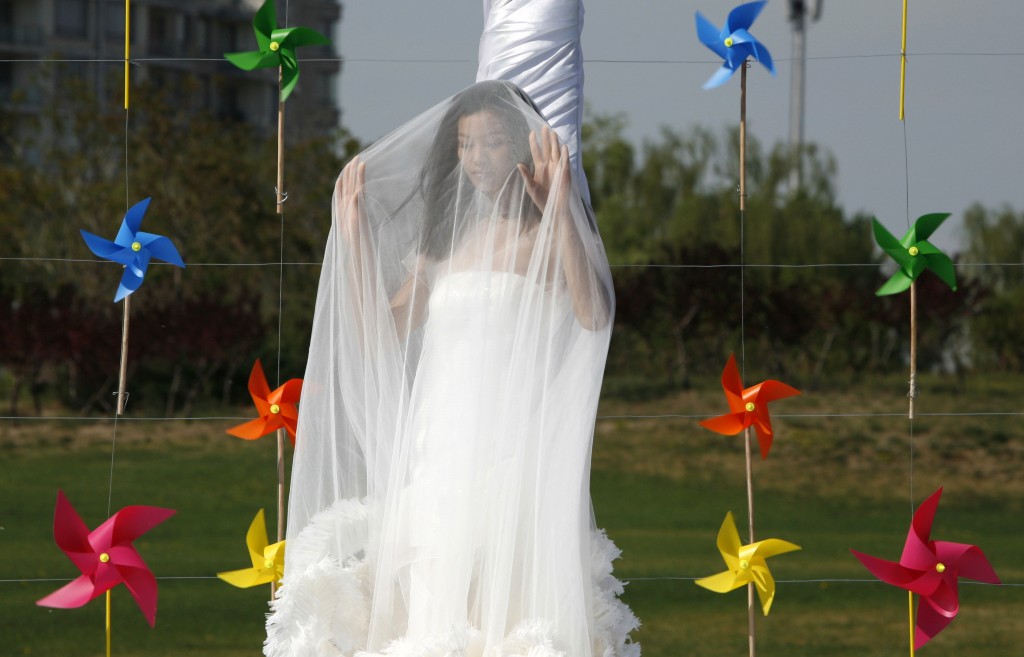 A model present a wedding gown during a show by the M&Y Wedding Design in Beijing, April 23, 2011. (AP Photo)

"The app showed that there was a gay man 10 centimeters from me a half an hour ago. That is how I confirmed that my ex-husband is truly gay."

Li did not know that her marriage was based on a lie.

The 35-year-old officer worker from Qinghuangdao, in eastern China’s Hebei province, found out she was a “tongqi” six months after marriage. That term, which can be loosely translated into English as "gay-person's wife," is used to describe millions of Chinese straight women who unknowingly marry gay men.

China has around 20 million gay men, and about 80 percent of them marry a woman, according to an estimate from Zhang Beichuan, a prominent Chinese scholar who studies sexuality.  Being an openly gay man is socially unacceptable outside of large cities in China, and homosexuality is often still viewed as a medical condition even though the government no longer recognizes it as an illness.

And in a country where the one-child policy was the law of the land for decades, closeted gay men face enormous pressure to marry and start a family–even if they have no interest in women.

That leads many gay men to deceive women like Li, who asked that her full name not be used, into marrying them. The results of these marriages are often unhappy, and sometimes lead to physical and emotional abuse and the spread of sexually-transmitted diseases. In one widely reported incident, an instructor at Sichuan University jumped off a 13-floor building and died after discovering that her husband was gay.

Li's marriage ended in divorce after she used a popular Chinese gay dating app known as "Blued" to learn the truth about her husband – and confronted him. "The more women know about my experience, the less chance they will end up with the same tragedy," she says.

Li has sought help from other women who have had similar experiences through "tongqi" support groups. Still struggling with the aftermath of her divorce, Li, who posted about her experience on a 'tongqi' bulletin board on the Chinese site Baidu, shared her story with Global Journalist's Weimeng Bao. Due to the sensitive nature of the topic, Global Journalist could not independently verify all aspects of her story.

Global Journalist: How did you meet your ex-husband? Did you notice anything unusual?

Li: We were introduced via an acquaintance at the end of 2015. My ex-husband was then 38 and had a six-month marriage in 2008. According to him, the previous divorce was because a health condition of his ex-wife's made it hard for them to have sex.

We then started a relationship. We dated almost everyday, but he never took the initiative to contact me. After a few months, our parents got involved. Each were happy with the other family. My ex-husband soon proposed to me, and I said yes. We got married at the end of May.

We never had sex before marriage. Even a kiss was rare. But I thought this showed that he is a conservative, well-mannered guy. I did not think too much about it.

GJ: When did you start to suspect your husband was gay?

Li: After marriage, we rarely had sex. At the end of June, I accidentally overheard a phone call. My ex-husband was driving at the time and I was sitting by him. He put the call on speaker and a man asked him whether he was busy.

He didn't give the other man a chance to talk. The other man replied sadly, "OK." Then my ex-husband immediately hung up the call.

I started to be suspicious after that incident. On the advice of a gay friend, I installed Blued on my phone. The app shows basic personal information of gay men around you, including their exact location [via GPS], age, height, weight and sexual orientation.

When my ex-husband was with me, I failed to find anybody like him on Blued. However soon after he left home, the app showed that there was a gay man 10 centimeters from me a half an hour ago. That is how I confirmed that my ex-husband is truly gay. A newlywed couple waits for a wedding photo session in Shanghai in 2012. (AP Photo/Eugene Hoshiko)

GJ: Did you talk to your ex-husband after discovering this?

Li: I talked to him almost right away. I showed him the Blued page, but he just explained that other gay men registered for him and he merely used the app to make friends. Nothing happened. He convinced me that he loved me and he only needed time to overcome his disgust for the female body. I believed him.

I tried several means in an attempt to convert him. I even tried my best to bear his child. He was still indifferent, refusing conversations with me. He hated me. Once I was mopping the floor while he was playing computer games. I hugged his right leg to act cute, but he hit me with his left slipper in response.

GJ: When did you decide to divorce him?

Li: One month after our talk, I decided to end the marriage. There was one night that my ex-husband decided he would sleep on the couch instead of sharing the bed with me. I was angry, and I said we have to divorce.

His face was distorted. He began to madly hit my head against the couch, punching my face over and over again. My glasses were sent flying and my right eye hurt so much that I could barely see anything. I was later diagnosed with posterior vitreous detachment [a condition caused by the retina separating from a membrane in the eye]. Even now, my right eye still has complications.

That is the night that I became determined to divorce him.

I then told his father that he is gay. His father did not seem surprised, and asked about my plan. I told him I wanted a divorce.

A few days later his mother, who was undergoing chemotherapy, came to me and begged me not to divorce her son. She said she would take my ex-husband to see doctors and cure the "disease." She went to a fortune-teller for help, who told her that the "disease" could only be cured when he turns 42-years-old. His mother decided she didn't want to hold me back, and approved the divorce.

As for my parents, they did not believe my ex-husband was gay. But they agreed to the divorce due to his abuse. I completed all the divorce paperwork within one month. A couple waits for a wedding photo session in Shanghai in 2012. (AP Photo/Eugene Hoshiko)

GJ: Did you feel better after the divorce?

Li: Not really. The pain tormented me for nearly three months.

Before finalizing the divorce proceedings, I was conflicted—I felt I could not live without him, but at the same time I was afraid of him refusing to divorce me.

Nearly no one knows that I have divorced. I didn't want friends or colleagues around me to know about my divorce, let alone that my ex-husband is gay. For a time, I even changed the WeChat [a popular Chinese messaging app] name of a friend who often contacted me to "Husband."

Two months after the divorce, a friend of mine who knew the real reason for my divorce pursued me. He is kind and warm, but I can't bear any kind of intimacy – even hugs. Once, I could not help but kick him when he tried to kiss me.

When I was collecting evidence to verify that my husband is gay, I joined many QQ [a popular online chatting app] groups he was in. I saw too many hardcore pornographic images. Now I feel disgusted with men's bodies.

GJ: Did all the 'tongqi' you know choose to get a divorce like you?

Li: Not every gay man's wife will divorce. It mainly depends on personality and financial situation. Almost everyone struggled and suffered after they realized the truth. For some, their gay husbands may deceive them and tell them they are bisexual and like women as well as men, so the wives may hesitate to get a divorce. Their suffering could be short or long, even endless.

The financial condition matters, especially for those with children. I know an unemployed 'tongqi' with twins. She could just barely take care of one on her own, but could not endure having to separate them. So she stays in the marriage. But she always sends messages to the 'tongqi' QQ chat group at midnight, saying she woke up crying again.

GJ: Why do you think your husband married you in the first place?

Li: I think he did this because he wants a child. Before we got divorced, I created a fake account to chat with him on a gay QQ group. He told me that a gay man must marry a straight woman as soon as he can, because otherwise siblings are the only people he can count on when he gets old. And if a gay man does not get married and has no child, he will disappoint his parents.

I asked him why doesn't he marry a lesbian so he can also have children. He said this is weird and unacceptable.

GJ: Do you still take part in online support groups for women with gay husbands?

Li: Yes, I still chat in these groups every day. I used to just complain to the other 'tongqi,' but now I try to persuade them to get divorced as soon as possible. They are really vulnerable. For instance, one of the wives told me that she felt consoled after her husband showed her flirtatious messages he exchanged with other women in an effort to prove that he's straight. It may sound weird, but these were her real thoughts.

with translation assistance from Xiaosheng Yin