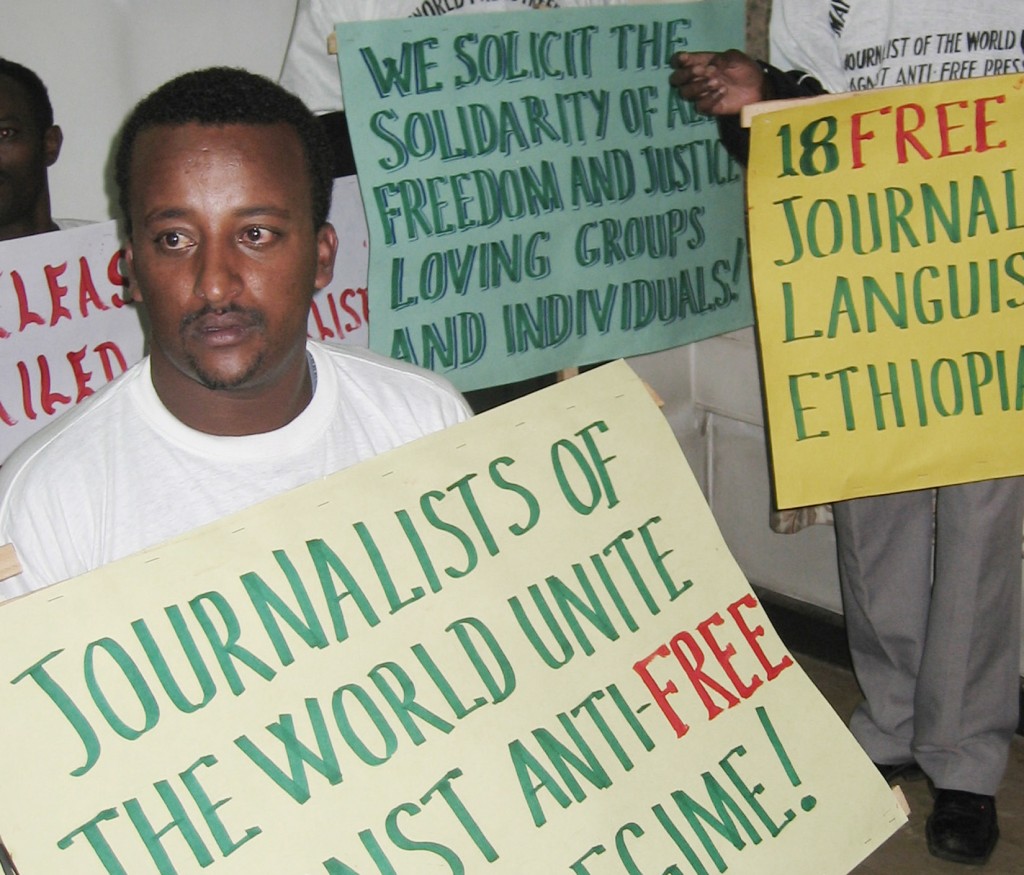 “The government was not happy to see that independent journalists wanted to raise their voices and support journalists in prison or simply defend our rights.” In a country where state media dominates the airwaves and challenging the official line of the ruling party can land a reporter in jail, an independent journalist’s association was never going to be welcome.

But that’s exactly what Ethiopian journalist Betre Yacob tried to establish in January 2014, when he and a group of colleagues sought to officially register an independent press group called the Ethiopian Journalists Forum.

Government harassment immediately followed. That was nothing new for Betre, who had previously reported for the Ethiopian magazine Ebony and online news sites like the U.S.-based The Daily Journalist.

As he told The Huffington Post, members of Ethiopia’s National Intelligence and Security Service had already been following him and his computer and phone had been monitored. In 2013, someone from the federal police called him and accused him of being a terrorist and working against the government.

But in April 2014, police raided his home while he was out of the country at a conference. The Ethiopian Journalists Forum was being targeted, and Betre feared that by returning to Ethiopia he’d be jailed. After two years in exile in Kenya, he and his wife recently moved to the U.S. where he’s adapting to life on a new continent. Betre spoke with Global Journalist’s Domenico Zappone about his time working in one of Africa’s most restrictive press environments.

Global Journalist: How did you get in to journalism?

Betre: I started to work for this international humanitarian organization right after I graduated in Journalism and Communication at university. I’d been there for about four years…I started to write on sensitive issues as an independent journalist in 2011 and I also created a blog in 2012 to expose the human rights situation of the country.

GJ: What are conditions for independent journalists in Ethiopia?

Betre: Ethiopia is ruled by a minority group, which has control over everything, especially the economy. Oppression is a policy of the government and every aspect of life is encircled by government restrictions. To government officials, independent media is the enemy. The country is in a state of emergency [since October] and all social media networks are blocked.

Independent media organizations are now replaced by others that the government can control and it has become is extremely difficult to get fair and balanced information to millions of Ethiopians.

The Ethiopian government uses different techniques to silence independent voices and to avoid criticism. In addition to harassing and arresting journalists, it also imposes heavy taxes on independent media organization and printing houses. It also limits the number of printing houses in the country. There are now few printing houses and almost all of them are either state-owned or affiliated with the government.

In my life I really wanted to create awareness, I wanted the Ethiopian community to be aware of the problems and the terrible situations of the country, but the population is forced to listen to the government’s propaganda.

I always feel sick when I think of my country because I don’t know if the situation is going to change. The government controls everything, literally.

GJ: Tell us about some of the threats you faced.

Betre: In 2012 I began to receive warnings from National Intelligence and Security Service agents. They told me to stop writing and reporting about politics and human rights violations.

I had to resign from my job [in the regional city of Baher Dar] and move to Addis Adaba, the capital city of Ethiopia, where I continued writing and reporting for different media outlets.

Things got worse, I realized that my computer and other devices were under government surveillance and I was being followed. They started to tell me that they were watching me day and night and that they would have killed me if I continued to criticize the regime. That was the moment I realized that my life was at risk, and I was stressed and scared.

I decided to be strong and started working with other brave journalists. We wanted to improve the press’ situation in Ethiopia. There are few journalist associations in Ethiopia and most of them are affiliated with the government so they don’t care if journalists are arrested or harassed. As independent journalists we tried to tell the truth to other people, so we created the Ethiopian Journalist Forum in January 2014 in order to protect freedom of speech and freedom of press.

The government was not happy to see that independent journalists wanted to raise their voices and support journalists in prison or simply defend our rights. As a result, we were constantly targeted, and they continued to accuse my colleagues and me of being enemies of the country and the association is now criminalized and banned by the government.

In April 2014, I traveled to Angola to represent the EJP at an African Union conference about Human Rights. My colleagues in Ethiopia told me that the government had started another crackdown and we were the main target. My house was searched by the police and my documents were taken. Only then did I decide that I had to leave.

GJ: What does the government use to justify its actions against journalists?

Betre: They used to tell me that I was working for outlawed political opposition groups, but also human rights organizations that were against Ethiopia’s government.

Authorities define these organizations as “neo-liberalist” and enemies of the nations. I have been accused of working with Western governments and of conspiring with organizations such as the Committee to Protect Journalists and Human Rights Watch to commit terrorism in the country and acting against the public good.

They try to alienate journalists from society by giving people a false image of them. The following step is to arrest them and then probably take other measures if necessary. So many journalists are now in prison and they’re suffering because we all know that they use torture in prisons.

GJ: How did you make the decision to leave?

Betre: After we founded the Ethiopian Journalist Forum the situation got very complicated, the government started to harass me. I was afraid. I didn’t want to struggle anymore. When I was in Angola for that conference and my association was one of the victims of the crackdown I realized I couldn’t go on like that and I decided to leave the country.

I didn’t have any choice, I needed to continue to share my thoughts and my views and still denounce what is currently happening in Ethiopia, but I couldn’t do it from inside the country. I needed to choose between being quiet, going to jail and facing the consequences or leaving everything behind starting a new life.