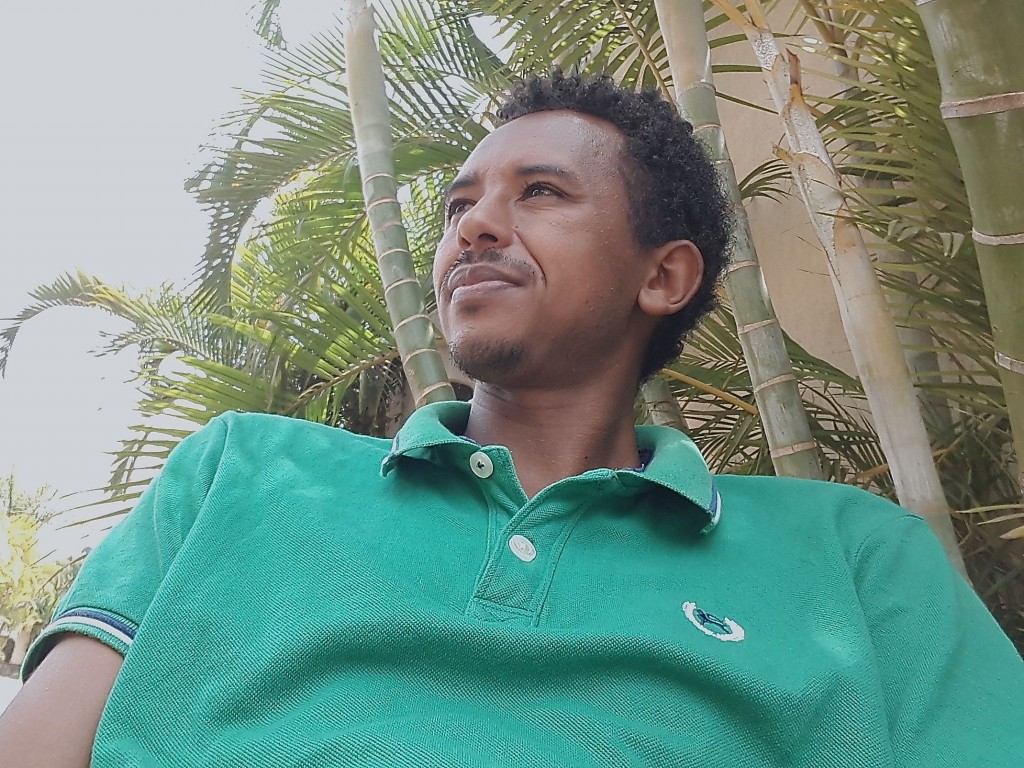 "They used to text [that] they know what I am doing and it would only be a matter of time for me to face the consequences."

Fasil Girma Aragaw got to know Ethiopia’s one-party state from the inside. As a reporter for state radio and television from 2006 to 2010, his job was to protect the image of the government.

“The media house was full of gatekeepers with no quality professional or educational background,” he says. “They were just there to defend the government from any critics. There was a high-degree of self-censorship.” Fasil, however, was outspoken and was often reprimanded for his efforts to push the boundaries of what government media could report. The difficulties with his superiors came to a head in 2010 when he was assigned to cover the Ethiopian government’s master plan to expand the capital Addis Ababa into land claimed by the Oromo, Ethiopia’s largest ethnic group. When Fasil tried to report on criticism of the initiative, he was threatened with punishment and eventually left his job.

From there Fasil began working for Transparency Ethiopia, a contact office for the international anti-corruption group Transparency International. He tried to cover government corruption and promote investigative journalism in the Ethiopian media – but soon was being followed and threatened by government security personnel. Such threats can’t be taken lightly in Ethiopia, which had 16 journalists behind bars in 2016, the fifth-most in the world, according to the Committee to Protect Journalists,

Fasil fled to Kenya, where he spent four years as a refugee and part-time freelance journalist for Deutsche Welle’s Amharic language service before being granted asylum in the U.S. He arrived in Tampa, Fla. in late 2016, and is trying to adapt to life in a new country. Fasil, 31, spoke with Global Journalist’s Mengchen Xin about the challenges of working for state media in a one-party state and the struggles of life as a refugee.

Global Journalist: How did officials from the Ethiopian Radio and Television Agency react when you pushed stories they didn’t like?

Fasil Girma Aragaw: Normally, they were giving me verbal warnings and threatening to fire me. On occasion, they claimed I might never be hired in any governmental institutions if they fired me. They cut my salary. They let me report to the office, but they didn’t give me any work to do.

GJ: What finally made you leave your job with state media?

Fasil: In mid-2010, I was assigned to work on Addis Ababa city development issues…how Addis was growing and “glowing.” I had interviews with Addis Ababa University professors who said: “Addis Ababa is growing but in the wrong way. The [government] Master Plan in Addis Ababa is not good…the city will turn out to be crap.”

My editors were upset by these comments. They said I was working contrary to government policy and needed to be checked. I had to leave, because I was not happy about it at all. I felt so bad the public institution was such a mess, controlled by the ruling party members who were just there to defend their own party. Ethiopians chant slogans against the government during their march in Bishoftu, Ethiopia, Oct. 2, 2016. Protests in Ethiopia's Oromia region in 2016 were sparked by unrest over a plan to expand the capital Addis Ababa into the Oromia regional state. (AP Photo)

GJ: What kind of stories did you write after you left state media? What got you in trouble?

Fasil: I used to write stories mainly on corruption issues and sometimes on media freedom issues. I had a project called “Monthly Journalists Roundtable on Corruption Issues” and used to gather journalists from both private and government [media] sectors, which was new for the country as these groups didn’t usually sit at the same table together.

The aim of the project was to promote investigative journalism and to let local journalists report more on corruption issues. I managed to run it the whole of 2011, however when we tried to [make it] an organized network, the government security groups tried to threaten me. I thought it would be just a small thing like before…but this time they openly harassed me and told me I would go to jail soon.

…People used to follow me wherever I go and wanted me to notice that I was under surveillance. They used to text [that] they know what I am doing and it would only be a matter of time for me to face the consequences. I thought I would rather go out of the country than face prosecution in a completely controlled court system.

GJ: How did you prepare to leave?

Fasil: At first I left the city and tried to hide myself for a couple of months in the country and see if the situation would calm down. But when I went back to Addis Ababa, things were as I left. I had to leave the country so quickly that I didn’t even say goodbye to my relatives and friends.

GJ: So you went to Kenya. What was life there like as an exile?

Fasil: I stayed exactly four years in exile in Kenya. Especially at the beginning, life in Nairobi was so tough and frustrating. I had no job and sustainable means of income, and I also didn’t speak Swahili [Kenya’s largest local language].

The presence of Ethiopian government security agents was high even there and Kenyan police harassed outsiders. I was struggling to fulfill basic needs like food, clothing, transportation and rent.

There are many exiled Ethiopian journalists in Kenya. Our cases were seen by UNHCR [United Nations High Commissioner for Refugees]. Transfer to a third country took a long time.

I spoke to many organizations like the Committee to Protect Journalists, Human Rights Watch, Amnesty International, Article 19, PEN International, the Doha Center for Media Freedom…and many others. They have helped me …and I owe them for their great support. Had I been without their support and God’s will, I might not have even survived my exile life in Kenya.

GJ: You were finally accepted for asylum in the U.S. How have your first months in Florida been?

Fasil: So far I am being supported under an immigrants support program. I try to keep writing articles, though it’s challenging…at least here it is safe.

I haven’t seen my family since I left the country. I call my mother every time I get the chance and she keeps asking me when I will go back. It is hard for me to explain this situation to her…[In Ethiopia] you never know how long you will stay in prison once you are in.