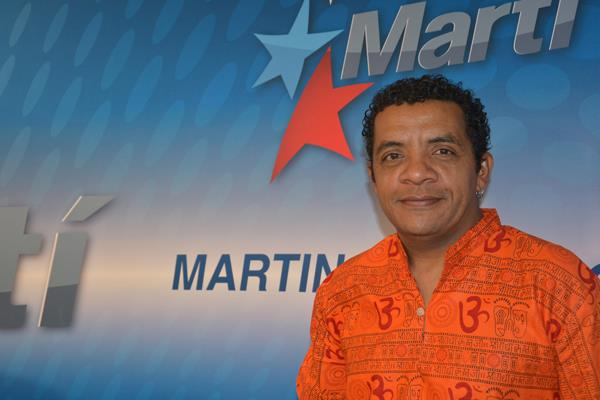 "I had to walk like 40 or 50 miles into other provinces, trying to reach a place where I had a good enough internet connection to post pictures."

In the early 2000s, Cuban journalist and poet Luis Felipe Rojas used to write anonymously about everyday injustices in his country on his blog Cruzar las Alambradas, or Cross the Barbed Wire.

Then in 2003 came Cuba’s “Black Spring,” when the Communist government arrested 75 people–mainly journalists and writers– in a high-profile crackdown on suspected dissidents. Rojas was friends with some of those arrested, but rather than being intimidated into silence, he chose to begin publishing news under his own name.

Among the sensitive topics he covered: police threats against young people who refused to show up for government jobs; state harassment of the comic actor Gabriel Darío Guerra González, a humorist whose home was repeatedly searched without charge; and the leakage of toxic gases from a nickel factory in the country’s eastern Holguin province.

This was the start of a new life for Rojas. For one thing, doing independent journalism in Cuba posed technical challenges. From his hometown of San Germán in eastern Cuba, he had to relay audio and photographic files to a contact in the U.S. who could post them to his blog. And of course, he became a target of harassment for the Cuban authorities.

The final straw came when Rojas wrote a report detailing human rights abuses in eastern Cuba in 2010, including the use of torture by the military and the use of forced labor in prisons. Of particular sensitivity was his decision to name the Cuban military officer who reportedly tortured imprisoned dissident Orlando Zapata prior to Zapata’s death after a hunger strike.

Police came to his house at 6:45 a.m. and arrested him, detaining him for 13 hours. After his release, Rojas decided it was time to leave the country and find a safer place for his wife and two children. His chance came in October 2012. Today Rojas, 45, lives in south Florida and works for the U.S.-backed Radio Marti, a station that broadcasts news to Cuba. He spoke with Global Journalist’s Tomás Orihuela about his journey. Global Journalist: What is different about being an independent journalist in Cuba?

Luis Felipe Rojas: In the first place, you need to handle phone calls from the internal security forces and political police whenever you publish something that they don’t like.

In the beginning, you get warnings, but then they detain you. They threaten you directly, telling you that they’re going to imprison you or that you’re violating the Ley Mordaza [Gag Law], or that you’re infringing on a job that is not yours.

Later, when you start covering special events like demonstrations or protests, they imprison you. Sometimes for months. You suffer repeated beatings and your family is harassed.

GJ: What kind of pressures are normal for independent reporters?

Rojas: If you write a report that you know will bother them, you know the police are going to come.

The most controversial topics: information on the military, the Interior Ministry, or photos of human rights violations always get you detained. That’s the consequence. There are only two possibilities: a short detention or they convict you [of a crime]. There’s a moment when this doesn’t matter to you anymore.

GJ: What problems did you have taking photographs? An image of Cuban dissident Orlando Zapata Tamayo hangs on a wall during a vigil in Havana, after his death in 2010. (AP Photo/Franklin Reyes)

Rojas: I had to walk like 40 or 50 miles into other provinces, trying to reach a place where I had a good enough internet connection to post pictures.

Also, policemen knew me. So they knew that I was going to take photos. The fact that I took photos of poor neighborhoods and run-down sports facilities attracted a level of vigilance. So when you go out to shoot, they detain you, they can take your camera away from you for weeks. In a lot of places there were police informants.

GJ: After you published the human rights report naming the officer involved in torturing the dissident Orlando Zapata Tamayo and criticizing prison conditions, you decided to leave. Tell us about that moment.

Rojas: They told my family and I: ‘If you don’t leave the country now, you’ll have problems in the future.’

I already had problems with detentions and threats. I had ongoing cases against me.

I decided with my wife that we needed a break, because I was going to keep writing, and I could be imprisoned for that. My children were too young to decide for themselves. We reached a consensus decision. It wasn’t rushed. An international agency managed our departure, helping us with the procedures we had to complete.

GJ: Do you think of going back?

Rojas: Now I’ve stopped being a “kamikaze journalist.” I work with an editor and a whole newsroom. When you work with a team you learn how to lower your voice and listen to the other points of view. It involves more objectivity, so in the end, it’s better journalism.

I won’t go back to Cuba until the conditions that made me leave change. I don’t believe anything is going to change, but at the same time, new technologies prevent the government from controlling everything. Anyone can take pictures from an event that the government doesn’t want to be promoted.