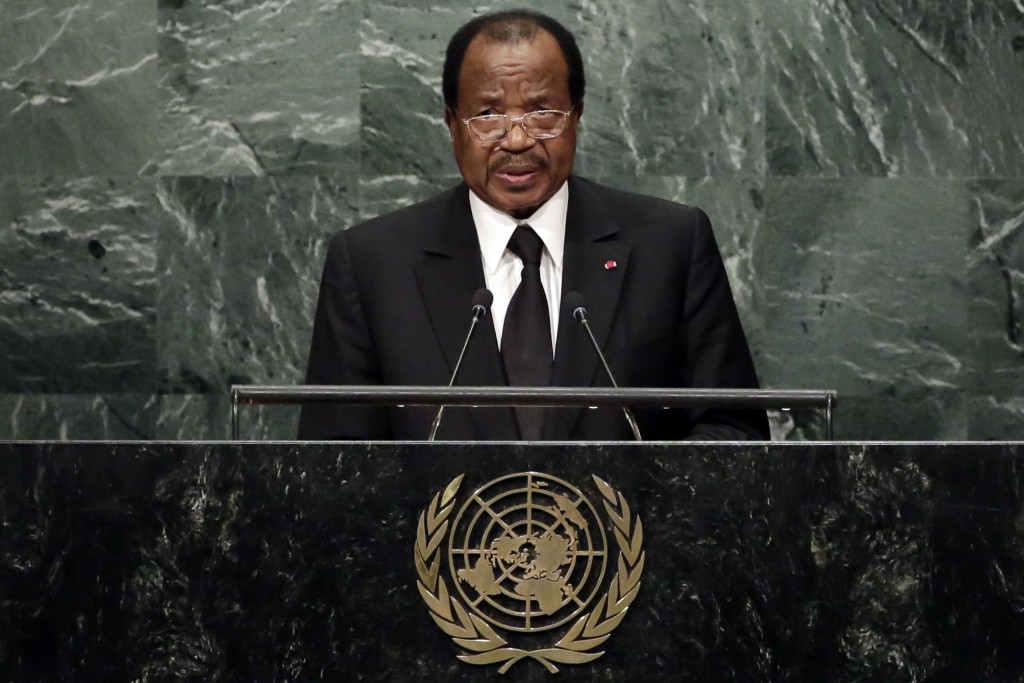 Art has always been Ako Eyong’s main tool of expression. Born and raised in Cameroon, Ako graduated from the University of Buea in 1996 with a degree in history. Unable to find a decent job after graduation, he became disgruntled with corruption and mismanagement in the central African nation and began drawing political cartoons. These he submitted to The Post, Cameroon's largest privately-owned English-language newspaper. Eventually, he became the newspaper's cartoonist.

Sandwiched between Gabon and Nigeria, Cameroon is rich in both oil and minerals like aluminum and iron ore. The country is also rich in media: as of 2012 there were approximately 400 privately-owned newspapers and more than 350 radio stations, according to the U.S. State Department.

Yet during his 34-year rule, President Paul Biya has kept a lid on criticism by restricting the work of independent journalists. According to the Committee to Protect Journalists, only state media is permitted to cover presidential events and the government uses criminal defamation and libel laws as well as restrictions on media licensing to silence critics. The country ranks 126 out of 180 countries on Reporters Without Borders' World Press Freedom Index, behind countries like Zimbabwe and Afghanistan.

Ako's political cartooning soon landed him in trouble with the government, and he fled to the U.S. Now working as an artist in southern California, he spoke with Global Journalist's Leonard Ehiemere about threats to free expression in Cameroon and his struggles as an exile.

Global Journalist: You got your start as a political cartoonist in Cameroon. What do you think of press freedom in your country?

Ako Eyong: I think that press freedom in Cameroon is reflective of much of Africa or where democracy is not as it is supposed to be… Africa has had such rulers and it is expected that for them to stay in power, they have to blot out every possible opposition. So part of that is to have a very strong control of the media and communications. The threat is always present: journalists are always aware of the fact that there is a line that once they cross it, anything can happen.

GJ: How did you get started as a cartoonist?

Ako: I am an artist, and one of the things I was able to do as an artist from a very young age was draw.

As I became an adult and graduated from college, I came into the reality of how bad the economic situation in Cameroon was because I found myself trying to get a job and there were no jobs, [raising] a lot of questions in my mind. Why are there no jobs? Why are things the way they are? Cameroon is a very rich country in terms of natural resources, but why are things the way they are? My research pointed to the direction of mismanagement and corruption. And being an artist, I started expressing my disgruntlement with the government by way of political cartoons. I started submitting these cartoons to the local newspaper called The Post, and they liked my cartoons.

Before long, I became the official cartoonist for the paper and I was doing cartoons in every publication and after doing that for some time, I started feeling insecure, then I started looking for how to get out of Cameroon.

GJ: Was there a specific cartoon that got you in trouble?

Ako: Cameroon’s biggest city is Douala and to get to it, you have to cross the longest bridge in the country. When you are on that bridge at midday and the train is going by on it, cars and people are going by on it, it vibrates. And so I did a cartoon and the idea behind the cartoon was that in Cameroon foreign expatriates receive more attention than the Cameroonian nationals.

In my cartoon, I said that until an accident happens on the bridge in which a Frenchman dies, the bridge is not going to be replaced. So it was a cartoon that caused a lot of trouble because the government found it insulting. I went through a lot of interviews, and eventually after a year, I got a work permit and social security number.

GJ: Can you share your experiences in exile? How was your initial arrival and what is life like for you now?

Ako: When I arrived here, I landed in Atlanta and from there to [Washington] D.C. It was very cold. I had never experienced that kind of cold before coming from Cameroon, which is 3 degrees north of the equator. So I moved to California, where I am right now.

First I did landscaping, it was very hard work; after that job, I got another job in a warehouse, packing and shipping. I was always aware of the fact that I am an artist, so one day I decided to quit the job.

I printed some samples of my paintings, took them to the streets and started selling them to people. I wasn’t making much but I was making just as I was making at the job shipping car parts. So I was able to pay my rent, take care of myself and meet all of my financial obligations.

I did that up till 2008 when U.S. economy went south. I lost my apartment, lost everything I had and became homeless. I would say that was the most difficult episode of my experience in America, living on the streets. There were many times I wondered if I was crazy, but it was also during this time that I started working on my first book.

Eyong is the author of the 2013 book "The Vision of the Blind King" and a series of children's books called "Preserving Paradise."