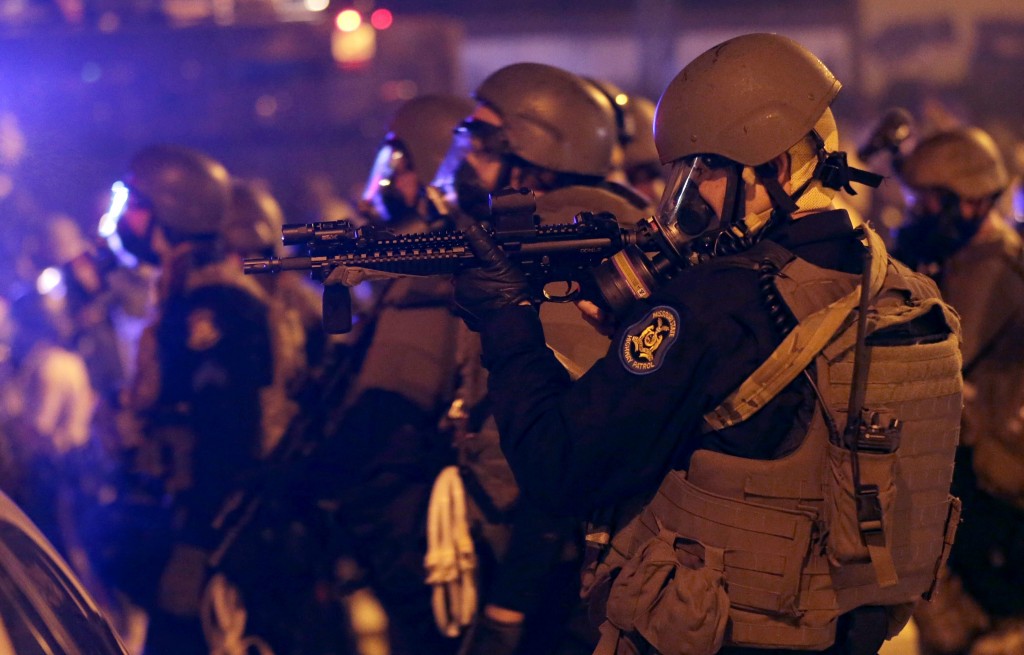 In this Aug. 17, 2014, file photo, police advance after tear gas was used to disperse a crowd during a protest for Michael Brown, who was killed by a police officer in Ferguson, Mo. (AP Photo/Charlie Riedel)

Tony Messenger knew that his journalistic career would never be the same after the 2014 killing of Michael Brown in the St. Louis suburb of Ferguson, Mo.

In the days after the unarmed 18-year-old black man was shot by police officer Darren Wilson, Messenger was there to experience the anger in the city, and then put that anger into words to speak for a city in turmoil. A veteran reporter and, at the time, the editorial page editor for the St. Louis Post-Dispatch, Messenger wanted to provide a voice for a community who felt their views had gone unheard. “I’m going to be writing about this for the rest of my life,” said Messenger in a lecture at the University of Missouri School of Journalism in October.

Messenger, who was named a finalist for a Pulitzer prize for his editorials, was recently awarded a Missouri Honor Medal, the top award from the country's oldest journalism school. Yet Messenger wanted a new approach, and changed jobs from editorial page editor to metro columnist "to get more personal in how I connected to readers," he said.

A graduate of Loyola University in Chicago, his new role at the Post-Dispatch puts him in the same job as his journalistic idol, Mike Royko, the famed columnist for the Chicago Tribune.

Messenger, whose early career in journalism took him to outlets in Colorado, Arizona, Nebraska and South Dakota, joined the Post-Dispatch in 2008. Although Messenger was a well-known journalist in the St. Louis community, it wasn’t until August of 2014 that his editorials garnered not just a local audience but a national one. On occasion during the protests, Messenger said he wrote for those covering the issues for the national media, "just so they'd get it right."

At other times, he sought to influence the local community and on occasion just one person: then Missouri Gov. Jay Nixon, who Messenger criticized for failing to be more proactive during the months-long unrest. A man watches as police walk through a cloud of smoke during a clash with protesters, Aug. 13, 2014, in Ferguson, Mo. (AP Photo/Jeff Roberson)

Going out on the streets among the police and angry protestors was not an easy task, but Messenger said it helped him grow as a journalist. “I needed to go be there during the day when families were marching, and also be there at night when the masks came on and tear gas came out,” Messenger said.

Even being tear-gassed served as inspiration. “The burning in my nose and eyes made me a better writer--you cannot forget that sensation,” he said.

While the Ferguson protests may be over, they left an indelible mark on Messenger and he's sought to highlight the underlying issues that fueled the protesters' anger.  He wanted to tell the stories and struggles of the people of St. Louis that many readers might not know exist.

One of those was Lawrence Strawbridge-- a resilient 16-year-old who commuted an hour every day from a poor and mostly black part of inner city St. Louis so he could go to a top school in a wealthy suburb west of the city. Strawbridge and his mother were stabbed to death by his two weeks before beginning his junior year. Strawbridge's half-brother was later charged in the deaths.

Messenger still wears a purple wristband to support the Lawrence Strawbridge Foundation, which provides money to so-called "transfer" students like Lawrence. Lawrence’s story is an example of what Messenger seeks to do with his writing. As Messenger said in his lecture, "My job is to make you see yourself in the people I’m writing about.”