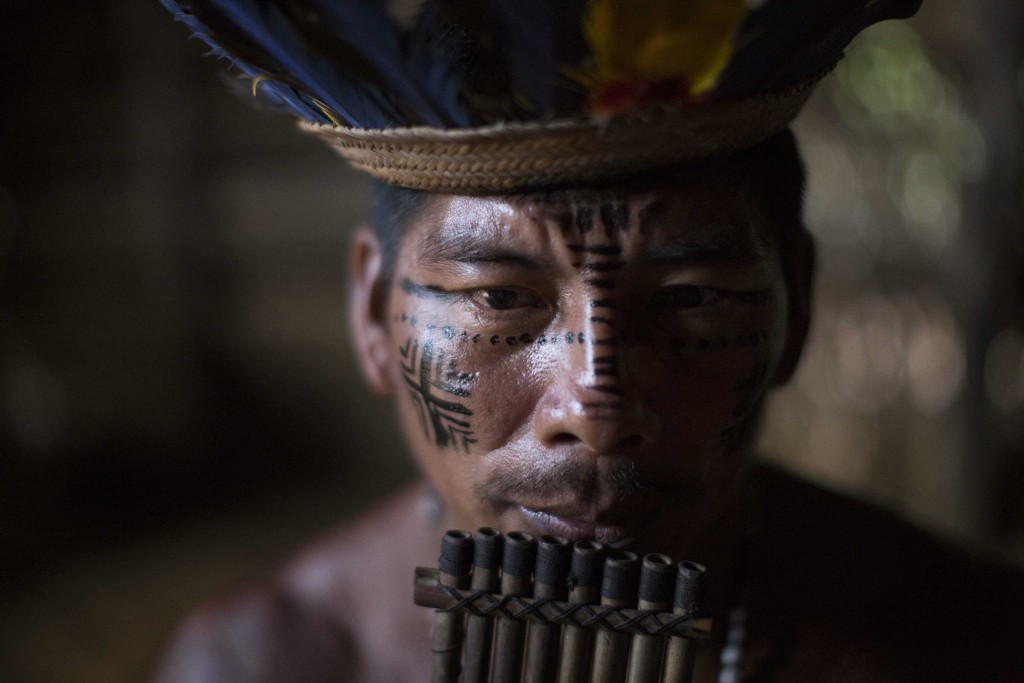 A man plays the flute in the Tatuyo indigenous community near Manaus, Brazil in May 2014. (AP Photo/Felipe Dana)

“I don’t want to sit back here...and just watch these groups get smaller and smaller and then blink out.”

In June of 2014, a video showing a man giving bananas to two previously loincloth-clad tribesmen in northwestern Brazil near the Peruvian border went viral. It was hailed as a unique moment, a friendly initial meeting caught on camera with one of the world's few dozen remaining tribes of people who live without regular contact with the outside world.

That meeting highlights an ethical debate about how modern societies should interact with the world's last "uncontacted" indigenous groups – nearly all of whom are deep in the Amazon rain forest in Brazil and Peru. These isolated people may survive by hunting and gathering food in the forest, or by cultivating gardens with handmade tools. In some cases, they don’t wear clothing and speak languages that aren't understood by anyone else.

On the one side of the debate are groups such as London-based Survival International. They argue that isolated tribes such as the Sapanahua, which the two young men in the 2014 video belong to, should be protected from contact with outsiders unless the tribes seek it out themselves. They highlight the fact that contact with such groups has often proven disastrous for indigenous people in the past, with as much as half the population being wiped out by diseases to which they had no immunity.

Further, they argue that many of these groups have chosen to isolate themselves after catastrophic interactions with outsiders previously - such as occurred during Brazil's rubber boom in the late 19th century when many natives were enslaved. This 'leave them alone' argument espoused by Survival has largely guided the policy of the United Nations and the Brazilian government's indigenous rights agency, FUNAI.

But that consensus has been recently challenged by anthropologist Rob Walker, who studies isolated tribes at the University of Missouri. Along with a colleague at Arizona State University, Walker published a 2015 editorial in Science arguing that such a policy left isolated groups vulnerable to predations from drug traffickers, miners and illegal loggers–and that they faced extinction without help from governments. Instead, Walker argued, governments should be trying to initiate "controlled contact" with these groups as a way of protecting them. The editorial garnered a sharp rebuke from Survival, which said such a policy would be "dangerous and illegal." Walker, who studies isolated tribes in the Amazon using satellite imagery, spoke with Global Journalist's Rachel Foster-Gimbel about the controversy.

Global Journalist: You do a lot of work with satellite photos; what do your findings show about these tribes?

Walker: We just track them, year after year after year, and we can see which ones are growing and which ones aren’t. For example, there is this one group here on the border [of] Brazil but close to Peru. We don’t exactly know the name of the group, but we know they’re Powa speakers. And this group is fascinating; they are clearly growing. The one bright spot in terms of uncontacted people is this group. Unfortunately, they’re the exception to the rule.

The Sapanahua group, for example, the contact they made in 2014 was pretty fascinating because they just came out of the forest like “Hey, here we are!”

And it’s been a great success story because no one has died. The Brazilian government showed up, they brought health care, and I think all indications show they took pretty good care of these people from the get-go

Survival International always brings up the terrible history of conflicts and how 80 percent of people died—and that has happened, but it doesn’t mean it has to happen in the future.

And I like the Sapanahua case because it shows that if you do things right and take care of people from the very get-go, while they might get sick, you can keep them from dying.

We could see this on the satellite imagery, [the Sapanahua] were getting smaller and smaller over time. They were getting forced out of Peru. They had been massacred at least twice—and then they made contact. A 2014 satellite image of a Yanomamö village, a critically threatened tribe in northern Brazil. (University of Missouri)

And if it’s true that no one is going to die in this contact process, we know the result: They’re going to start growing and their numbers are going to do great. This is why I think the "no contact" policy is a little bit crazy.

Here you have these groups that may be going extinct because we are leaving them alone—but we’re not really leaving them alone, are we? We’ve got loggers and miners that are out there massacring these people, and we can’t help them.... And if they do go extinct, here we just sat back and watched these people die out.

GJ: But in the case of the Sapanahua, they were the ones who initiated contact, not us.

Walker: Just because they initiated it, that to me doesn't matter. Within any group, there’s some people that want to make contact, I guarantee it. It’s usually the young people, and you could see it was the younger guys that came out of the forest [in the 2014 Sapanahua video].

They’re interested in the outside world. They want steel tools, they want clothes, they want to find friends. And the only reason they’re running away in fear is because they’re afraid of getting slaughtered by loggers and miners. They see the outside world as being dangerous.

But if you can get past that fear, I think almost without fail, people actually do want to make contact. They don’t, of course, want to die...they don't want epidemics. But there’s clearly lots of good things to be had in the outside world. I mean,  just look at how the human condition has improved over the last couple hundred years. We’ve gone from life expectancy of 30 years, which is probably what they face, to life expectancy of 70 years. Who wouldn’t want that?

The 'leave them alone' policy is basically saying: “We want to keep you back in the Dark Ages,” at this 30-year life expectancy. And to me, that’s a pretty nasty thing to do to people.

There’s sort of this naive notion that people are in this natural state of nature and they’re going to be fine if we leave them alone, and it’s just not true.

GJ: What do we know about the extent of the threat to these tribes from loggers and miners in the Amazon?

There's this massive invasion going on with illegal logging. So what we're trying to do is fly over these illegal loggers and get an idea of how close they are to the uncontacted people. The answer is that they're knocking on their backdoor, basically. It's a pretty bad situation. GJ: What unites you and groups like Survival International is that you both want to save these people. You just disagree about how.

Walker: If it was a perfect world and we really could keep out these external threats, maybe leaving them alone would work. And I would be happy with that. This group that is growing, I am happy to leave them alone.

GJ: How do you frame this as an ethical question?

Walker: I think Survival International asks the wrong ethical question, mostly because their whole foundation is based on the idea of saving traditional cultures.

I’m an anthropologist, I can appreciate saving cultures. But a more important thing to me is saving people’s lives. So I think that the question of saving cultures is an important one, but what supersedes that is 'how do we keep these isolated people from dying?'

We have the medicine to help these people. And by leaving them alone, we may actually be contributing to more deaths.

To me, the interesting ethical question is how do you value lives versus cultures? I always take the perspective that lives are more important because if people actually go extinct, then you would’ve lost the culture anyway. GJ: It sounds like you're arguing for different approaches depending on the threats to the tribe. If they're succeeding, leave them alone. If they're under threat, initiate contact with them.

Walker: The ethics surrounding this are messy, there are no clear answers here. And I think you could make the argument that in different situations, we should do different things. If a group is growing, I will leave them alone.

But, like this guy all by himself—the man in the hole [the last survivor of an isolated  tribe in western Brazil] as we know him. I mean for a while FUNAI [Brazil's indigenous people's agency] was trying to contact him.

There’s actually a whole movie about them showing up, and they actually filmed him and he’s shooting arrows at the FUNAI team, and then they gave up.

This guy is living extinction. Is it better for him to just live out his days all by himself, after the outsiders have killed all of his family? Or should we keep trying to make contact with him? That’s a really tricky thing.

But it does point to what we don’t want to happen in all these other cases. If we wait too long, then there’s not enough people to actually have a viable population anymore.