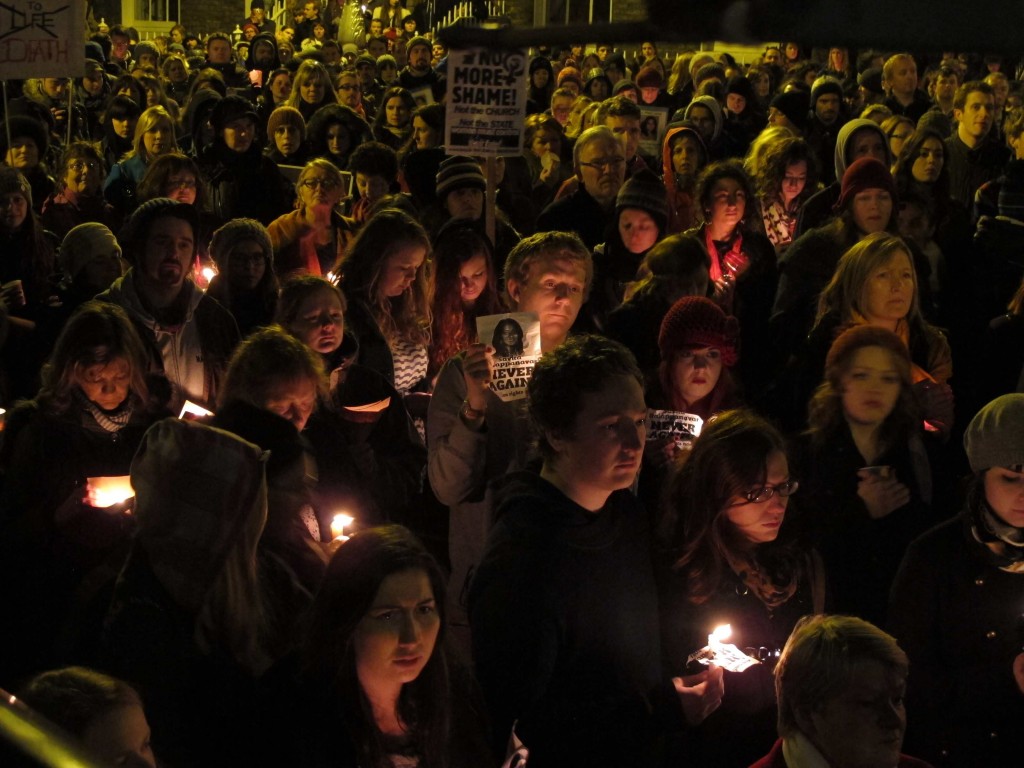 Abortion rights activists hold candles and display pictures in memory of Savita Halappanavar, a 31-year-old Indian dentist who died of blood poisoning after being denied an abortion in a Dublin hospital, during a protest rally outside Ireland's government headquarters in Dublin, Nov. 17, 2012. (AP Photo/Shawn Pogatchnik, file)

"I could get up to 14 years imprisonment for having an illegal abortion. Whereas the maximum penalty my rapist could get is seven years."

When the U.S. Supreme Court overturned many state abortion restrictions in Roe v. Wade, the decision had a dramatic effect across the Atlantic in Ireland.

Though abortion was already illegal in the overwhelmingly Catholic country, the Church and abortion opponents feared the country’s laws could be overturned by judges as in Roe. That led to a campaign to enshrine abortion’s illegality in Ireland’s constitution, which culminated in the passage of the Eighth Amendment in 1983.

Today the U.S. and Ireland are again moving in opposite directions, with President-elect Donald Trump vowing to appoint U.S. Supreme Court justices who would overturn Roe, even as a national movement in Ireland is pressuring the government to hold a referendum to repeal the Eighth.

One factor driving the movement is the growing number of Irish women speaking publicly about their abortions. Since the only exception to Ireland's ban is to save the life of the mother, about 10 Irish women a day travel to the U.K. for abortions. Among them was Cork-based Vanessa O'Sullivan, 28, who was raped and impregnated in August 2012. In November 2012, she traveled to England to end the pregnancy. Now an activist for Abortion Rights Campaign, she spoke with Global Journalist's Steve Dawson about her journey to London and her anger that Irish women convicted of obtaining illegal abortions face longer jail sentences than rapists.

Global Journalist: When did you decide to speak out?

O'Sullivan: The turning point for me was after Christmas [2012] when I visited a friend in West Cork. We were talking about the choice movement, and I told them what happened.

About three weeks later I found out my rapist had been [sentenced] for two and a half years–with 18 months suspended– for raping a thirteen year-old, two months before he raped me.

I spoke to one of the people at the Abortion Rights Campaign, and she invited me to a “Speak Out.” There were about 30 women in the room, and all of them were so casual about telling their story. There was one woman I absolutely admired who sort of broke down while telling her story, and I thought “Now it’s safe for me to say mine.”

It took me about half an hour to explain what had happened to me. Everyone was so patient, and so supportive that I was no longer afraid of talking about it.The questions I feared I would get never came. O'Sullivan: Our courts do not take rape seriously. We had a case last year where a woman was repeatedly raped by her partner in her sleep and he walked out the front door behind her with a suspended sentence.

The problem with cases like mine is that under the current legislation, I could get up to 14 years imprisonment for having an illegal abortion. Whereas the maximum penalty my rapist could get is seven years. Nine times out of ten it won’t be that severe and the rapist will get a suspended sentence. And that’s how seriously we take rape survivors who are willing to tell their story.

GJ: Recently, an Irish couple live-tweeted and posted photos of their trip to Liverpool to have an abortion. Did their story remind you of your journey to London?

O'Sullivan: It’s hard for me because when you start to tell your story, and when you start advocating for change, it kills you that every day, this is the reality for at least ten people in this country.

Just got moved. Not sure if it's any better to be in here. Imagine sitting in here on your own.. #itstimetorepeal pic.twitter.com/18lCSdazbS

GJ: Irish politicians do not like to take a position on the Eighth Amendment. Why do you think that is?

O'Sullivan: It’s understandable. All they care about is getting back into power. But even when you look at the Eighth Amendment and when it was written, they didn’t realize how many complications would come of it.

So we’ve had women who’ve had cancer having to go to European courts who have said, “This is outrageous. I can’t have cancer treatment because I’m pregnant, and I can’t have an abortion because it’s illegal.”

There are so many complications they didn’t foresee, and because it’s in our constitution, it’s a lot harder to broaden the interpretation of it.

Global Journalist: What are you doing now about this issue?

O'Sullivan: Because I live in a rural community, my job as an activist is to convince the people around me that it would be a good idea to repeal the Eighth Amendment. Yet again [politicians] are trying to kick it down the road and say, “It will be another two years at least.”

That means another two years where everyday, at least ten women have to face the plane. We are trying to promote the idea of safe and legal abortion, and having your income or passport not be a barrier to accessing your healthcare choice, –or an obstacle between a woman and her doctor.