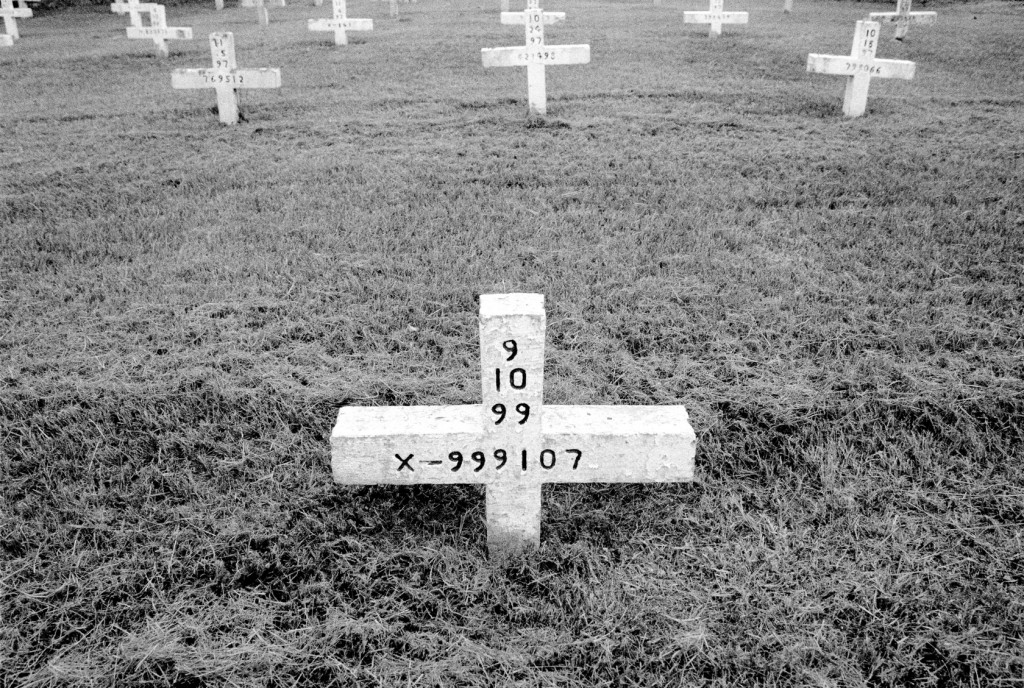 Grave markers give the date of execution and prisoner numbers at a cemetery in Texas.

"If people can see the reality of the death penalty, no one would want it any more."

Since the U.S. Supreme Court ended a de facto ban on the death penalty in 1976, the U.S. has executed 1,440 people. But the use of capital punishment has been declining. This year 20 people have been put to death, the lowest figure in 25 years.

The use of state power to kill its own people captured the attention of photographer Scott Langley when he was a college student in Texas in the late 1990s. Since then the 40-year-old Ghent, New York-based photographer has traveled around the country trying to document the moral impact of capital punishment.

An activist and Amnesty International state death penalty coordinator, Langley also made a 2006 mini-documentary on North Carolina's preparations for an execution, and covered the controversial 2011 execution in Georgia of Troy Davis. He shared a collection of his work and spoke with Global Journalist's Mengchen Xin about what he's witnessed and how it's affected him. 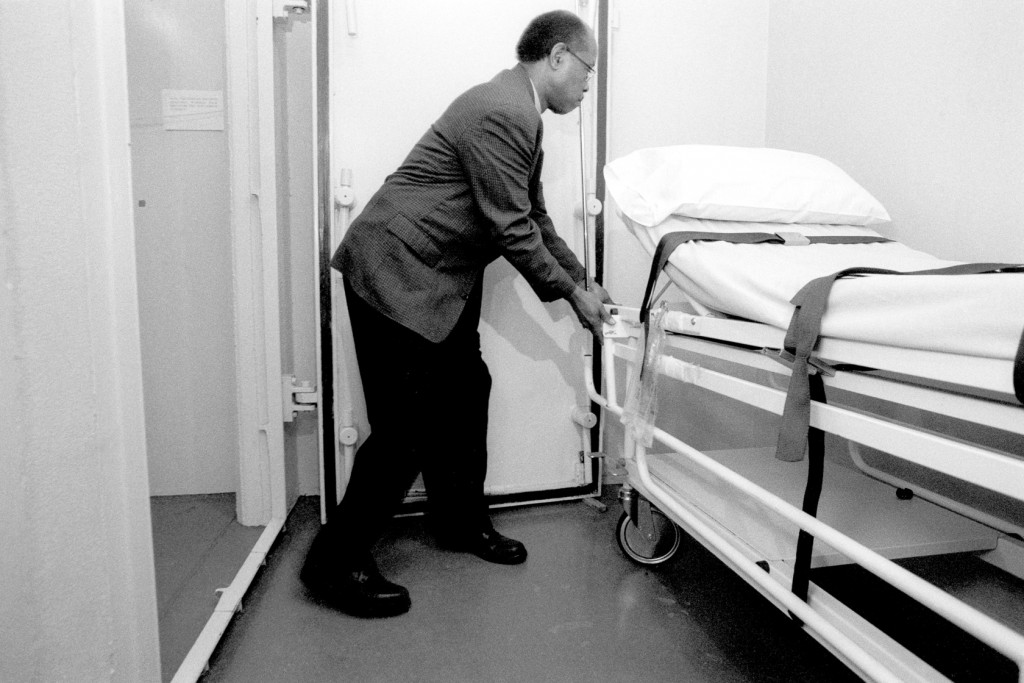 North Carolina's execution gurney, days before the execution of Sammy Crystal Perkins in 2004. 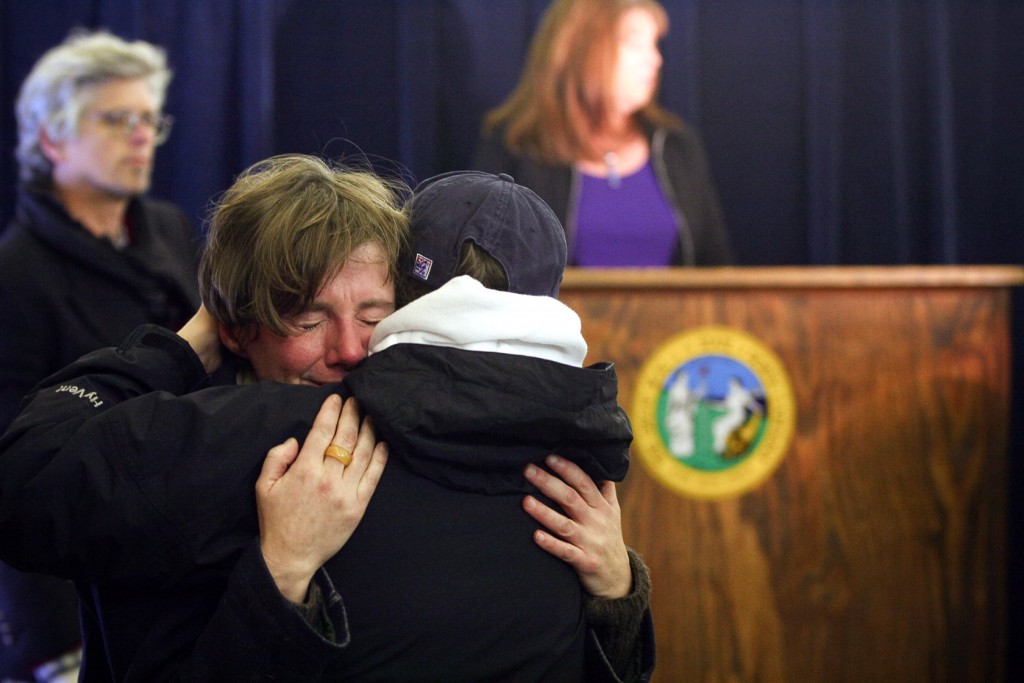 Attorneys in North Carolina in 2005 react to news that a last ditch appeal has been denied.

North Carolina's 'witness room,' where families of the victim and condemned may sit.

Grave markers give the date of execution and prisoner numbers at a cemetery in Texas. 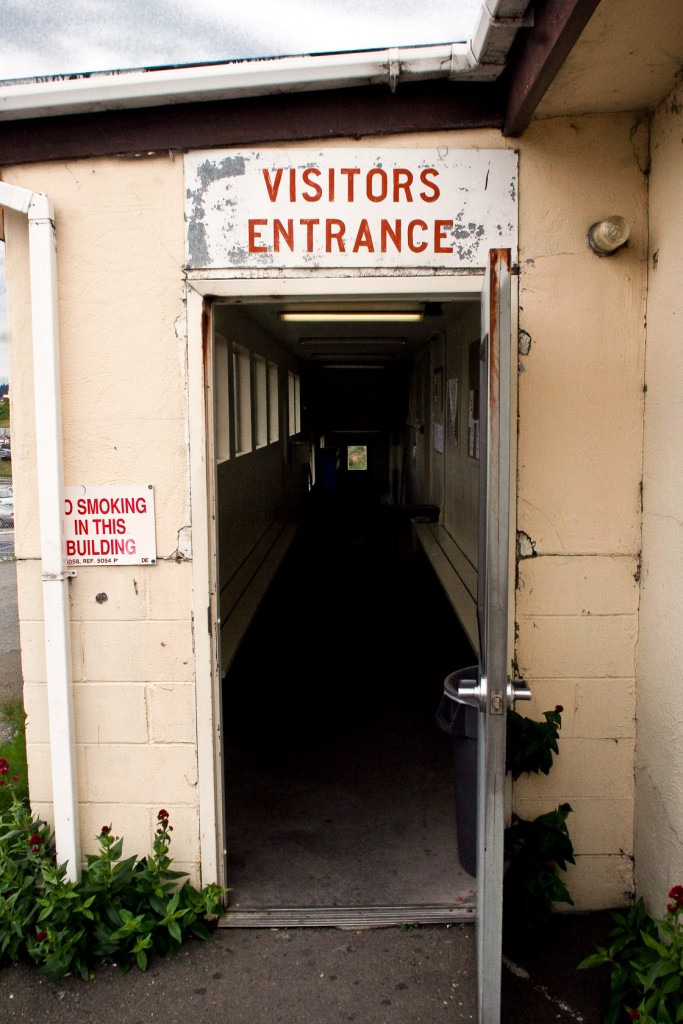 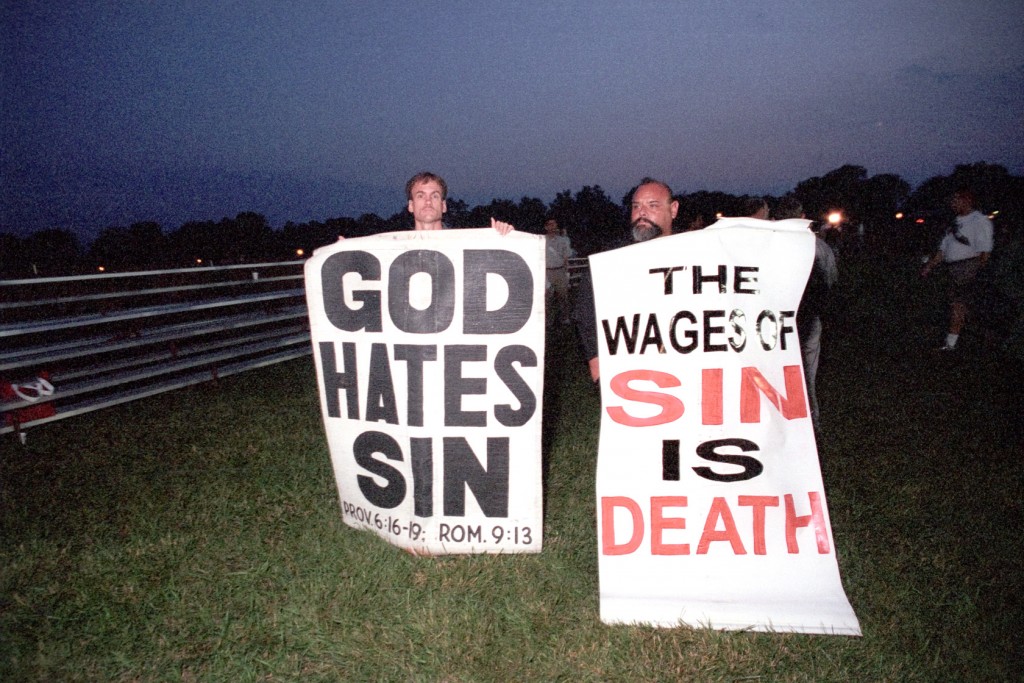 Supporters of the 2001 execution of Oklahoma City bomber Timothy McVeigh in Indiana.

Members of the KKK show their support for the execution of Gary Lee Graham in Texas in 2000. 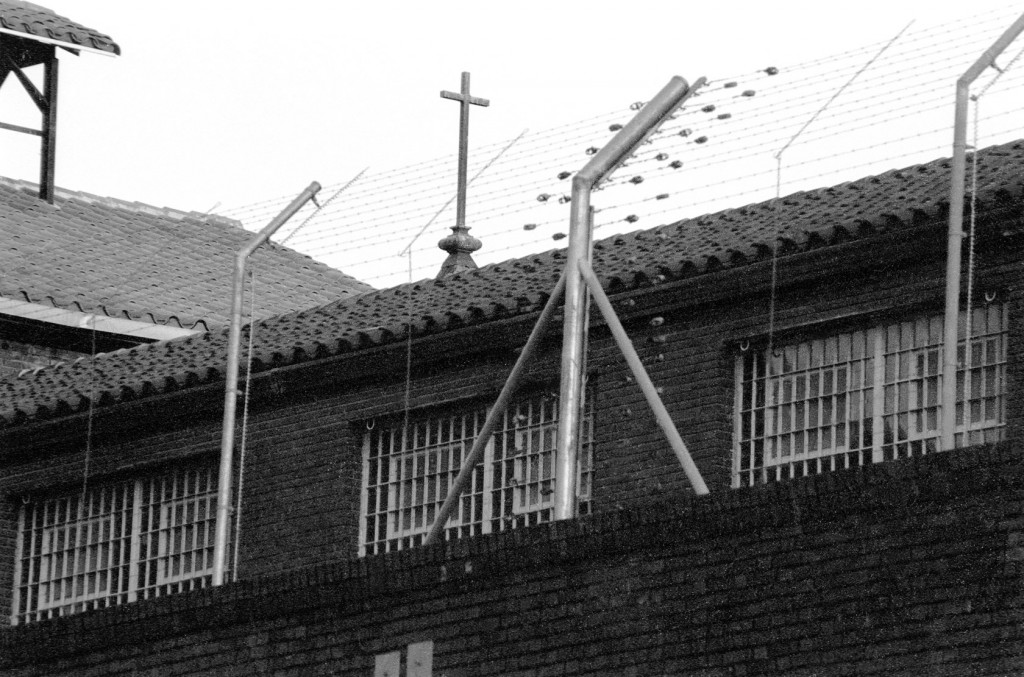 A cross atop a prison building that houses an execution chamber in Texas.

Global Journalist: How did you start taking photos about the death penalty?

Langley: I first started taking photographs of the death penalty as a part of an assignment in a college class I was taking in Texas. And Texas is notorious for its high numbers of executions. So I took my camera down to the prison to stand outside during an execution, just to take some photos for this class project. I really didn't have an opinion about the death penalty when I did that.

But to stand there in the moment and experience that was heart-wrenching. I knew the exact time, the exact place, the exact manner which a human life is going to be taken.

GJ: What have you seen as the impact of the death penalty on family members?

Langley: The death penalty is absolutely devastating to family members. I have spent time especially in the state of North Carolina, being close with family members who have loved ones on the death row.

It might be mental illness, it might be addiction to drugs or alcohol, it might just be having grown up in a violent community where there is access to guns. So the families are devastated by this, and it seems completely unjust for the parents. I’ve also seen the death penalty breaking apart families. Mothers who had sons put on a death row face an enormous matter of pressure from their communities.

GJ: Tell us about the Troy Davis case.

Langley: I had the opportunity to attend the execution protests of a man named Troy Davis in Georgia, who was executed in September 2011. Davis was convicted of the murder of off-duty police officer Mark MacPhail and he was sentenced to death.

There were nine witnesses on the prosecution side, and they all claimed that they knew Troy Davis committed the crime. But through further investigation after his conviction, it came to be known that seven out of the nine witnesses that had testified against Troy Davis said they actually had given false testimony, that they didn’t know who had killed the officer. Some of them said they were coerced by the police to give false testimony.

So an international campaign began to get the state of Georgia to hear the new evidence that Troy Davis was an innocent person wrongfully convicted of a crime he didn't commit. That evidence was hurting the court a lot.

Troy Davis got three execution dates and the first two were stopped. But the final execution was carried out despite the heavy air of innocence. There were no murder weapons, no fingerprints, and these eyewitnesses [were] lying. 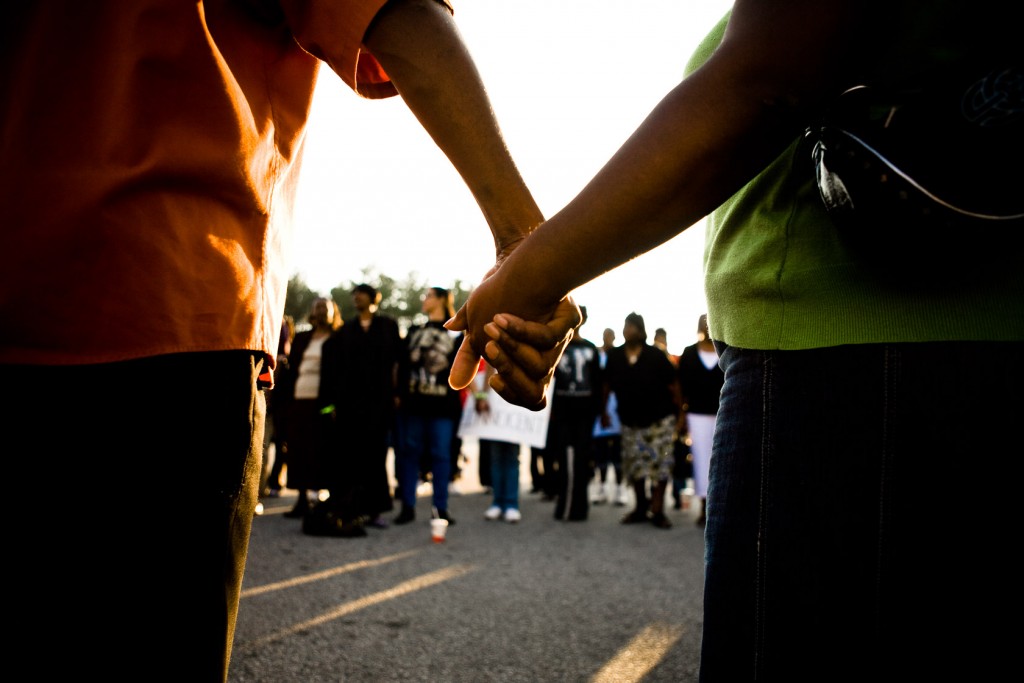 Protesters in a prayer circle after the Supreme Court issues a stay of Davis' execution in 2008. 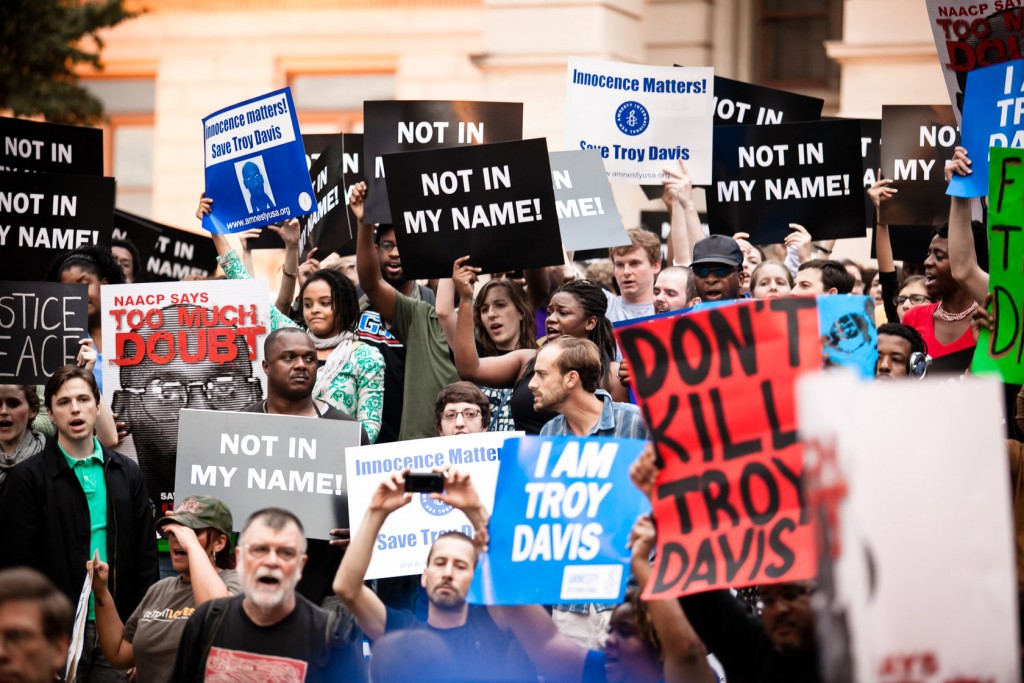 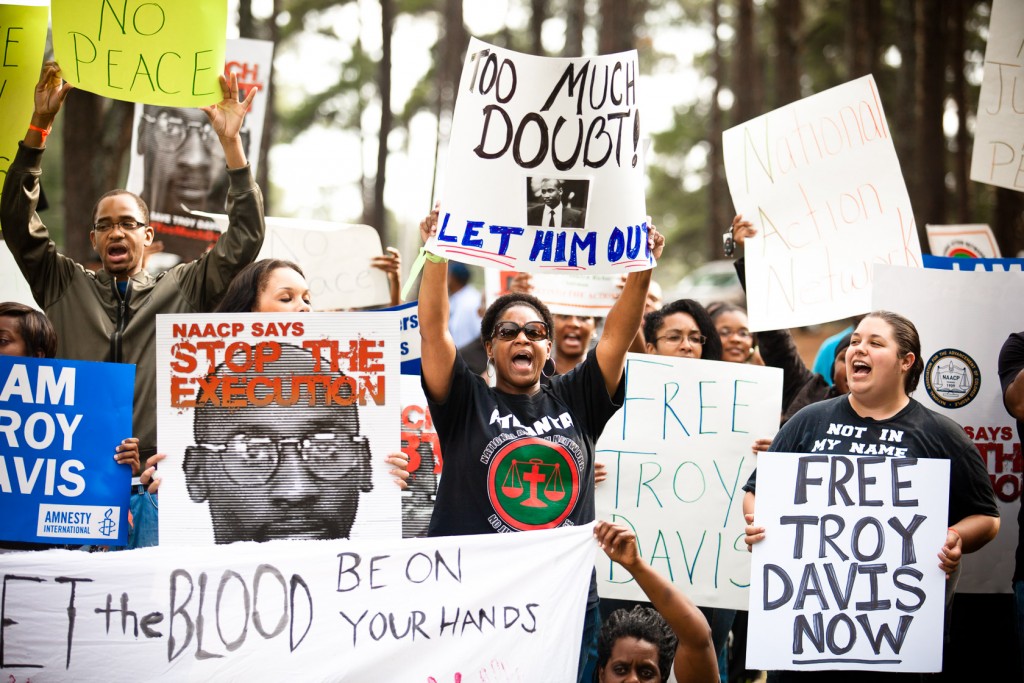 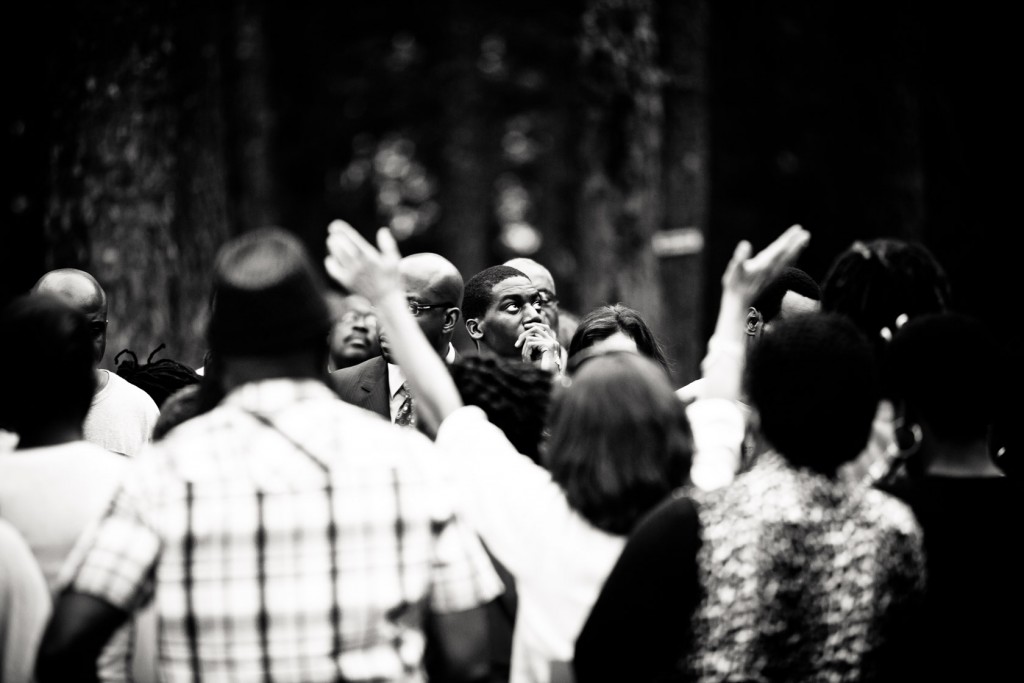 Davis' nephew looks to the sky, three minutes before his execution. 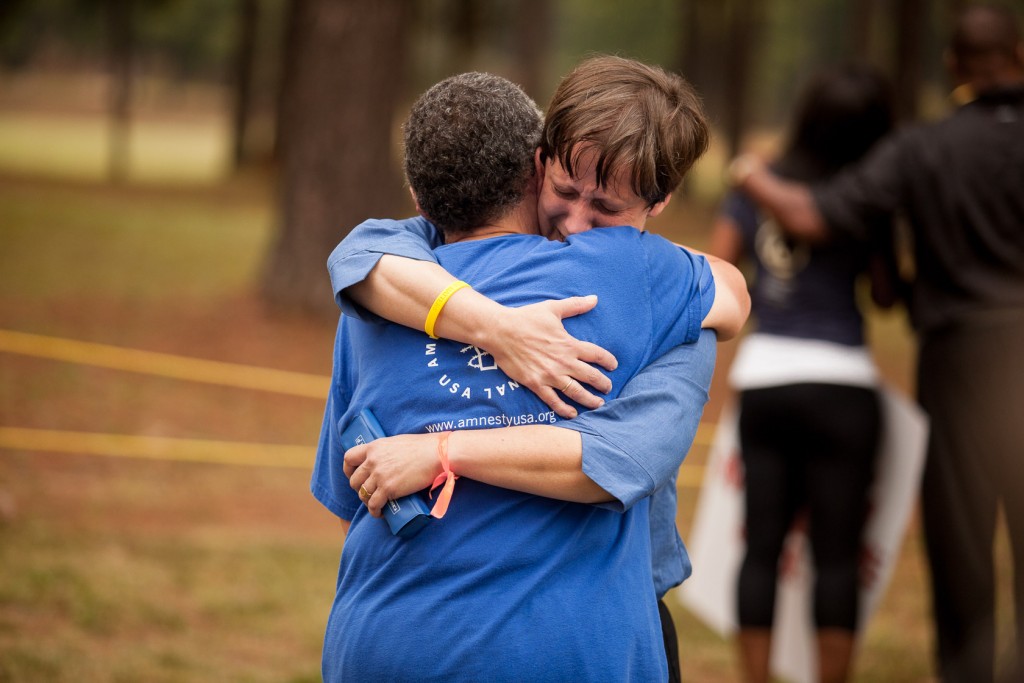 Protesters embrace at the moment they believe Davis is put to death.

GJ: What is it like inside the execution facilities?

Langley: Some prisons offer media tours in advance of the executions. I had the chance to go on a couple of tours of a prison.

What I witnessed was that the warden of the prison who oversees the executions laying out in a very systematic hour-by-hour, minute-by-minute description of the very intentional process they go through in the prison.

And it is horrifying that the murder of a human being is so deliberate and it’s treated in this complete neutral perspective – to hear the warden describe strapping a person to a gurney, inserting IV  tubes to their veins, and how the warden interfaces with the witnesses by telling them that they can’t cry, they can’t talk, they can’t show any signs of emotion while they are witnessing the execution. 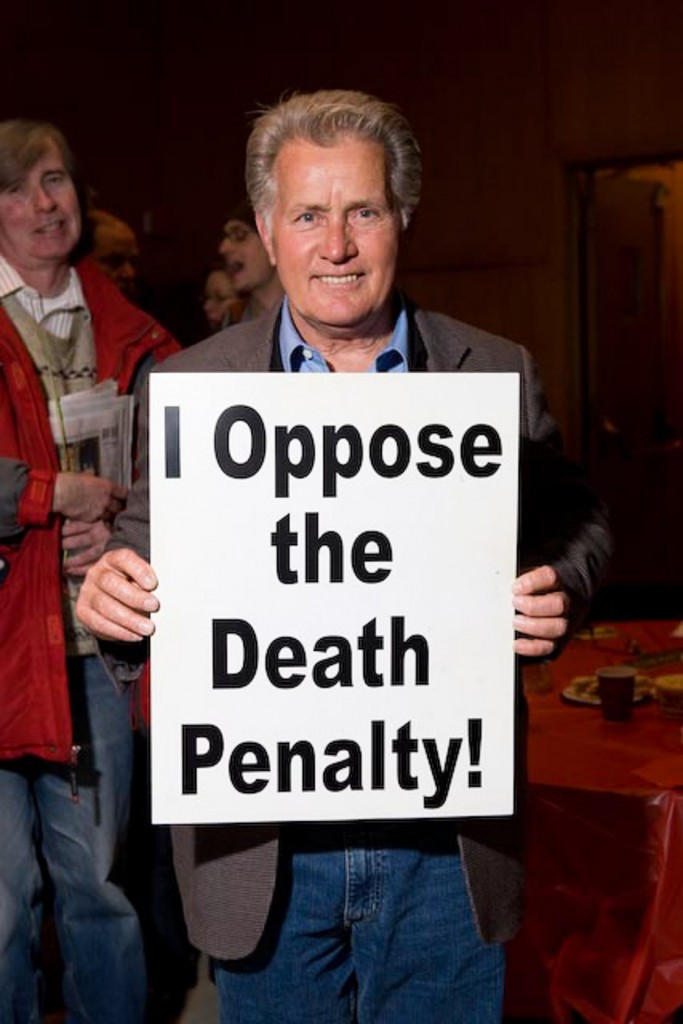 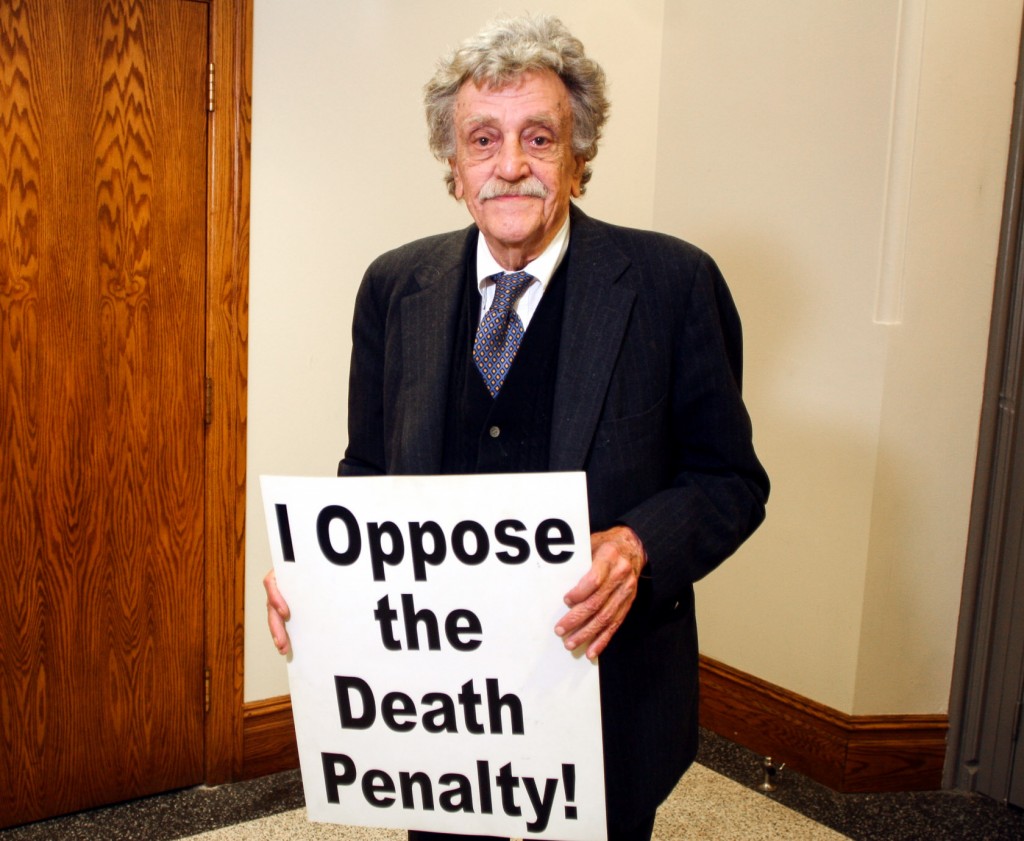 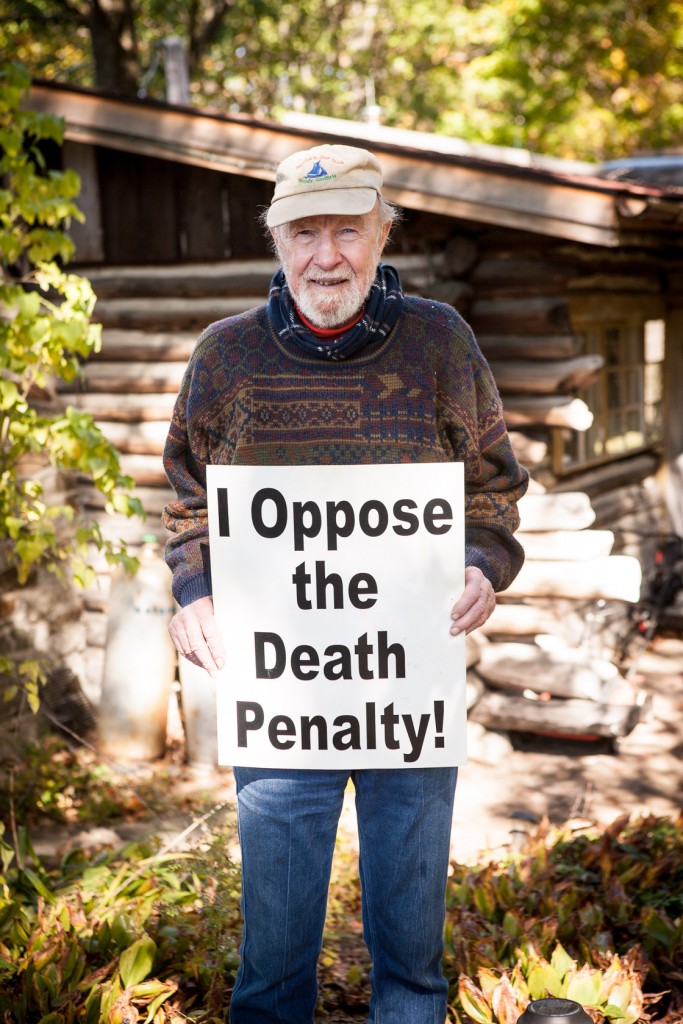 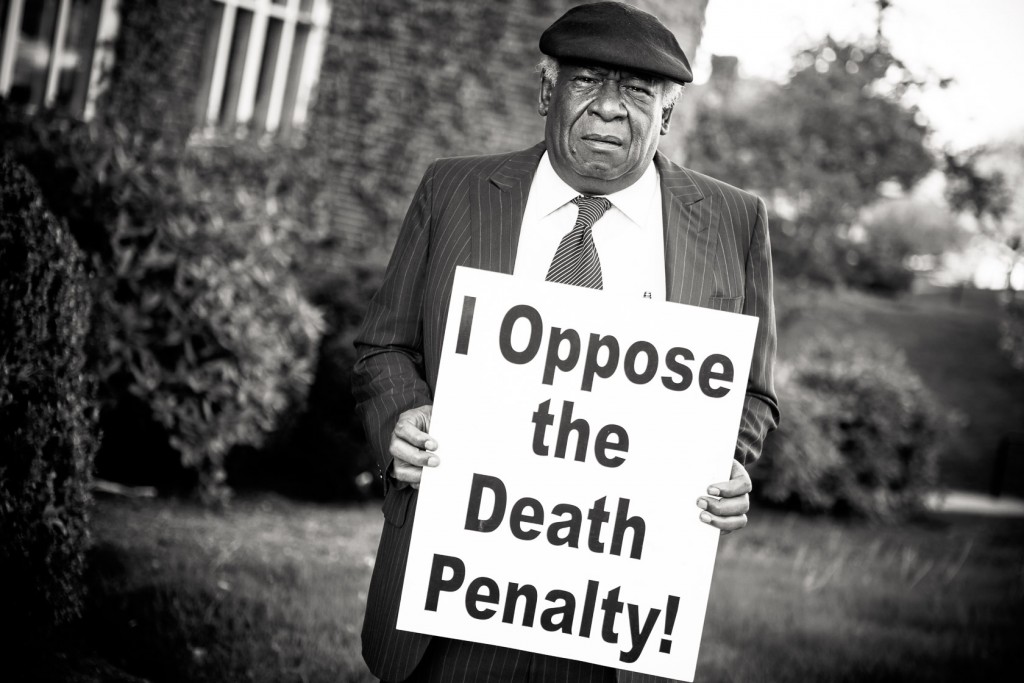 Freddie Lee Pitts, exonerated in 1975 after being sentenced to death in a 1963 Florida murder. 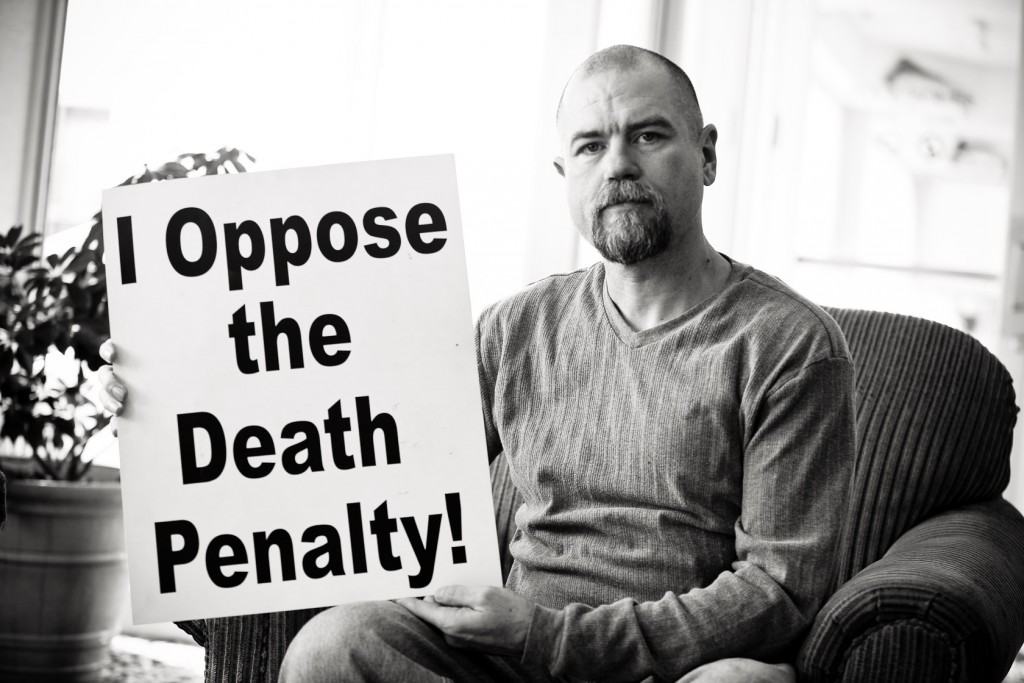 Curtis McCarty, exonerated in a 1982 Oklahoma murder after 19 years on death row.

GJ: Prisons in the U.S. ban people from taking pictures of executions. If you had the chance to photograph one, would you publish the photos?

Langley: If I had the opportunity to take photos of an execution, I think those are images that people would need to see. If people can see the reality of the death penalty, no one would want it any more.

It is barbaric, it’s gross, it’s disgusting, and it’s inhumane. If people have these images in their brains to know what this looks like, people would change their minds.

At [one time] executions did happen in an open public form, and the government stopped that because largely they were afraid of people seeing the truth and reacting to that truth.