Project Exile: On the run from Gambia's security forces 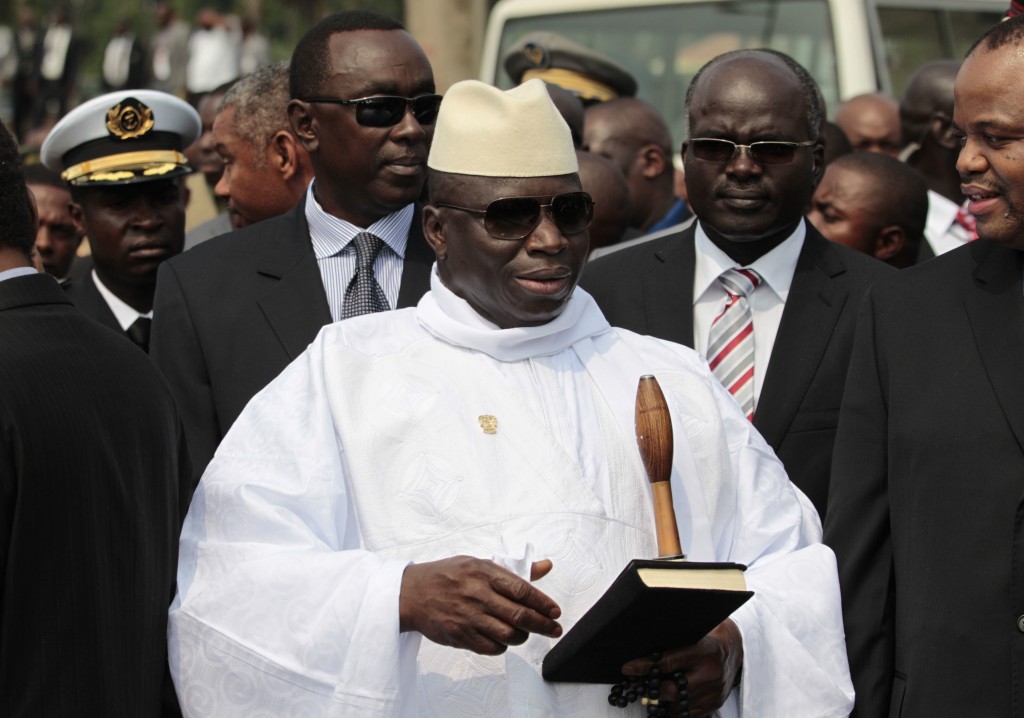 Gambian President Yahya Jammeh stands outside the Sipopo Conference Center in Malabo, Equatorial Guinea, ahead of the opening session of the 17th African Union Summit in June 2011. (AP Photo/Rebecca Blackwell)

"When they arrested them, I was in hiding for five days."

After graduating from high school in 2001, Buya Jammeh dreamed of becoming a journalist.

That was no easy career path in his home country of The Gambia, a tiny West African nation with no formal journalism education programs that is ruled by one of the world's more eccentric presidents, Yahya Jammeh. Buya, no relation to the president, got his start working for the local newspaper The Independent. Then one of the most critical newspapers in the country, The Independent was shut down by the government in 2006 after years of harassment by security officials.

He went on to work for The Gambia's Daily Observer, a staunchly pro-government outlet. However in 2008 he joined the executive board of the Gambia Press Union (GPU), an organization for journalists that was regularly critical of government efforts to silence critical reporting. His employer gave him a choice: quit the press freedom group or be fired.

He chose the latter.

Buya soon saw the consequences of his decision.  In 2009, the organization published a statement criticizing televised comments by President Jammeh about the 2004 killing of a prominent journalist named Deyda Hydara. The president had told reporters: “And up to now one of these stupid websites carries [the headline] “Who Killed Deyda Hydara”? Let them go and ask Deyda who killed him.”

The statement criticizing the president triggered a crackdown by the government. Seven journalists were arrested and put on trial for sedition and defamation. Buya fled the country for neighboring Senegal. Yet even there he didn't feel safe from the Gambian regime. In 2013, he came to the United States. He spoke with Global Journalist's Aleissa Bleyl about his flight from The Gambia, living in fear in Senegal, and the difficult separation from his wife and daughter. Global Journalist: So why journalism?

Buya Jammeh: Having grown up in a society where there's too much injustice, I mean, I felt that the best way I can do justice to the voiceless people [in Gambia] is to be a journalist and then voice out their concerns. This is why I decided to be a journalist. To voice out their concerns and then write about the injustice in the society. And then, sort of, you know, hope that things can change.

GJ: You had to make a choice between working for a pro-government newspaper and being a member of the Gambia Press Union.

Buya: It was a matter between principle and character and...image. Because if I had resigned from the Gambia Press Union and joined a newspaper that was owned by a politician - if I was fired the next minute, I'd have nowhere to go to fight for my rights. So I thought it wise to protect my integrity and follow the principles of journalism. It was wise for me to leave the newspaper work and join my colleagues in the union and continue fighting for their rights. President Jammeh, pictured in 2006, dismissed concerns about the unsolved murder of a prominent journalist. (EPA/Stefan Zaklin)

When the press release [criticizing President Jammeh's comments on the killing of journalist Deyda Hydara] was released by some of the local newspapers, the government decided to arrest some of my men: six of them, which included the secretary general, treasurer, and the vice president who is a female and was breastfeeding a 7-month-old baby at the time. She was thrown in jail like that with her baby, technically, because the baby had to be taken to the prison cell for him to breastfeed.

When they arrested them, I was in hiding for five days, which happened around the fifteenth of June 2009. So I was hiding until the 21st. That fell on a Saturday, when a cousin of mine decided to smuggle me out of the country and then I went to Senegal.

Buya: It wasn't 100 percent safe, but I had a little bit more freedom being in Senegal than in Gambia…I never wanted to surrender myself, or for me to be interrogated, because I had a lot of information about the Union that none of the other executive members had. I couldn't let it go just like that, so for them to interrogate me under duress and then get the information they want to get, that means that I would be exposing the secrets of the Gambia Press Union.

GJ: How did it feel having to leave your family?

Buya: Before my immediate family knew I was in hiding, I had already escaped. I thought it was wise to try and wait until [fleeing] was succeeded. When it succeeds, then I tell them. Because if I had told them before leaving, the outcry would have been too much, especially when it has to do with my mom. She would have forced me to surrender myself which I never wanted to do. I left in secret.

Buya: It's a country where our regime has succeeded in infiltrating and then paying a lot of Senegalese security personnel to spy on journalists and dissidents that live in Senegal. Technically, you're not 100 percent safe.

I was practicing as a broadcast journalist for an online news radio station called Radio Alternative Voice for Gambia. This program was established for exiled Gambian journalists to practice and broadcast Gambian news from Senegal. We had reporters who lived in Gambia who would send us reports after events and we produce and upload it on the radio online for broadcast. So I was working there just to continue the fight for press freedom in Gambia. I continued working there as a broadcast journalist until 2013. By then I had already applied for a training program at the University of Connecticut. Prior to leaving, I was attacked by a young man who I believe was sent by the regime in Gambia to either kill or kidnap me so I decided not to go back.

GJ: How did it feel moving to the United States?

Buya: Coming to this country, I feel like I began a new life. I was living a terrible life in Senegal, and having lived in a country where you cannot even trust who is who and you have to watch your back every now and then, I felt like my freedom began after coming to the United States.

GJ: What has been the hardest part of living in exile?

Buya: The hardest part is, you know, everything I have to do, I have to earn myself. Initially I had some benefits here, in the United States, but after I started work, after filing my papers, obviously they had to cut off everything. And I had to be hopping from one address to another because having the money to pay for my own apartment in places like New York is kind of expensive.

The other thing is I am definitely missing my family. I was married in Senegal prior to coming to the United States. I have my kid and my wife back home. For the past three years I have not been with them.

GJ: If you could speak to other Gambian journalists who feel unsafe, what would you say to them?

Buya: The only thing I would tell them is what I did - do your job according to the ethics of the profession. Don't side with anybody - be fair, and don't favor anybody. But make sure that you're mindful of the legal implications of anything that you write. There are a lot of legal crosses that can easily put you into problems in Gambia. All I have to tell you is do your job as a journalist and do your best to be professional. No matter what it takes, take responsibility of your writing.