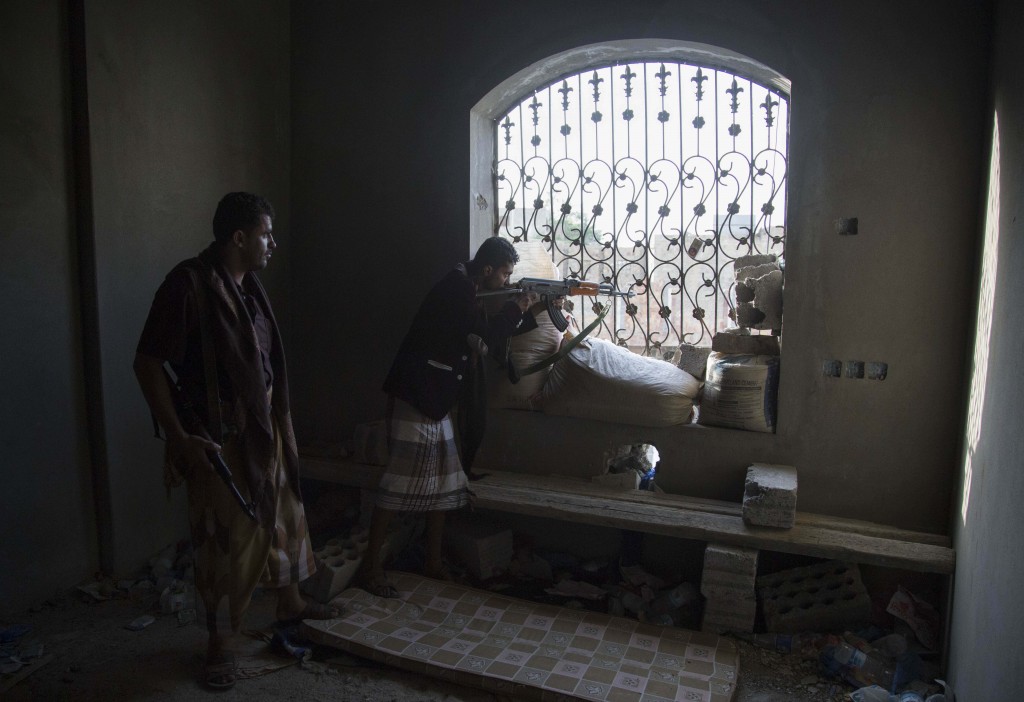 Members of Saudi-backed "resistance" fighters at the front in Taiz. (Asmaa Waguih)

While Syria garners international headlines as refugees stream into Europe, Yemen’s plight has gone largely unnoticed. The poorest country in the Middle East, Yemen has been mired in civil war since late 2014 and the fighting has greatly worsened a humanitarian crisis in the country that has forced 3 million people from their homes.

On one side are between Houthi rebels allied to former president Ali Abdullah Saleh. On another is a Saudi-led coalition backing President Abd Rabbuh Mansur Hadi. The fighting has been marked by Saudi airstrikes that have destroyed bridges, roads and hospitals, a situation that has made getting aid to some of the 14 million people who need it much more difficult.

In an effort to document the conflict, Egyptian photojournalist Asmaa Waguih traveled deep into Yemen in twice this year. Waguih, who has also covered conflicts in Syria, Afghanistan and Libya for Reuters and other photo agencies, spoke with Global Journalist's Tomás Orihuela about a country on the brink. 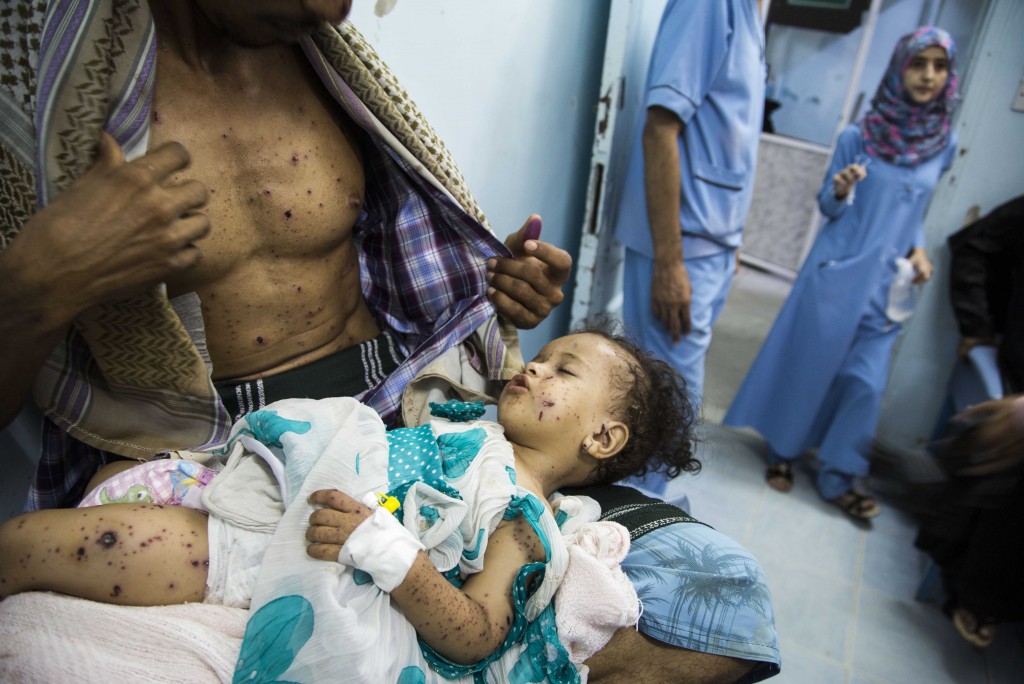 A man and his daughter who were injured by a shell that fell on their house. (Asmaa Waguih)

A girl injured by shrapnel in the city of Taiz. (Asmaa Waguih) 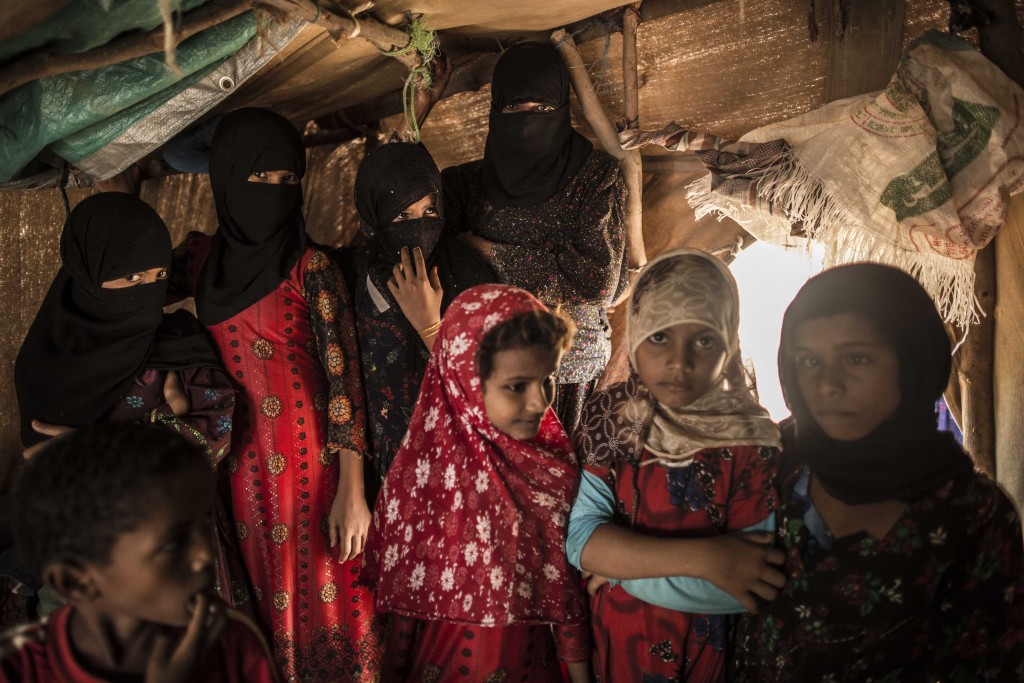 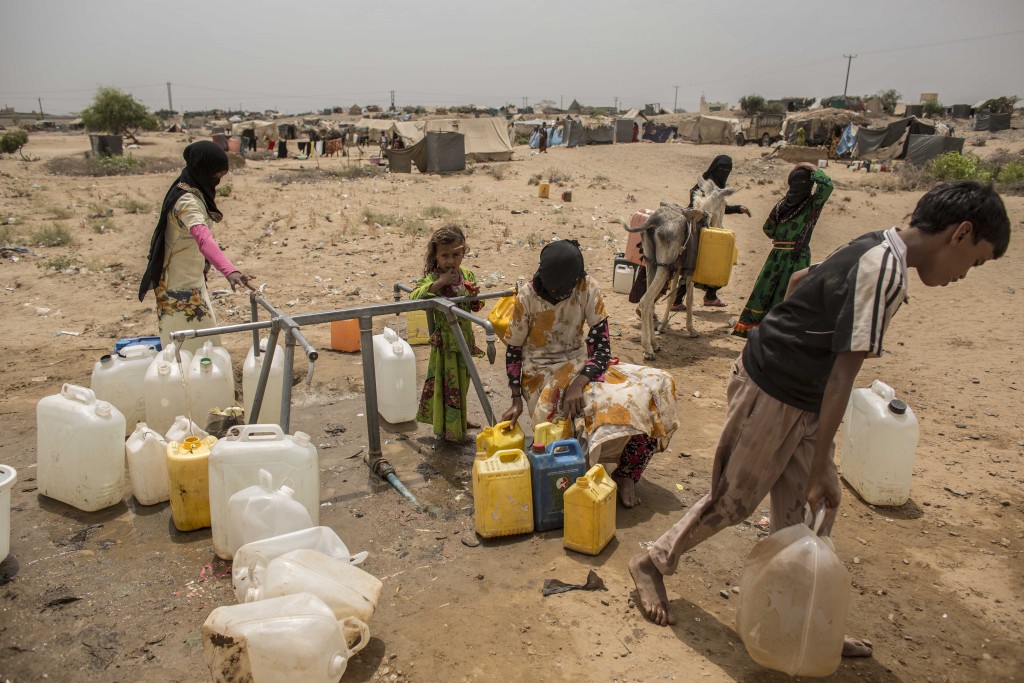 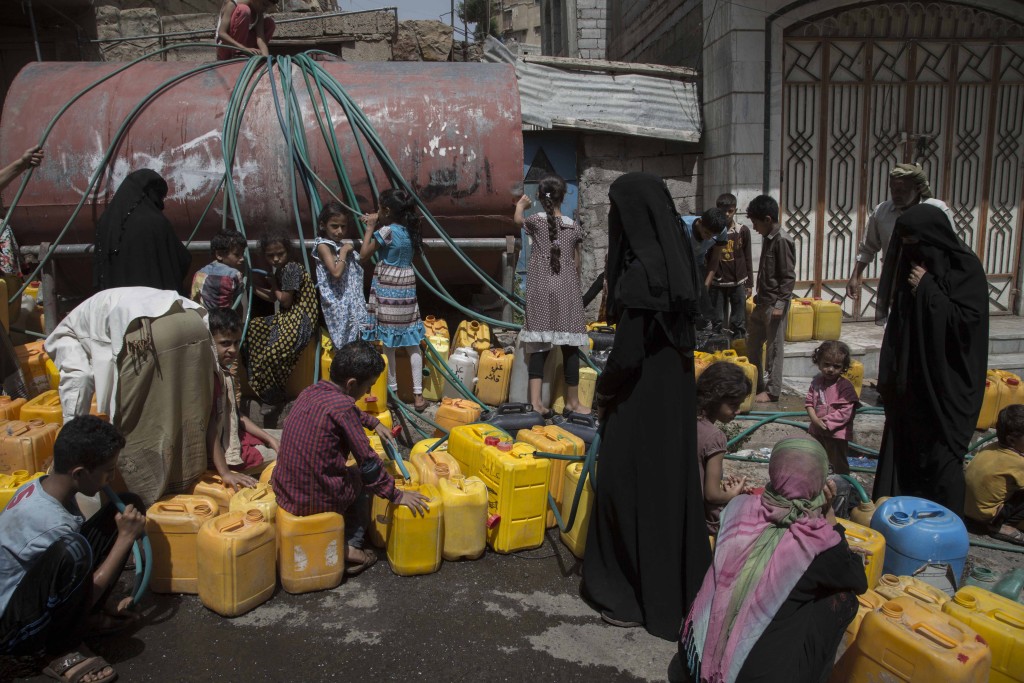 People fill their barrels with drinking water from a water tank in Taiz. (Asmaa Waguih) 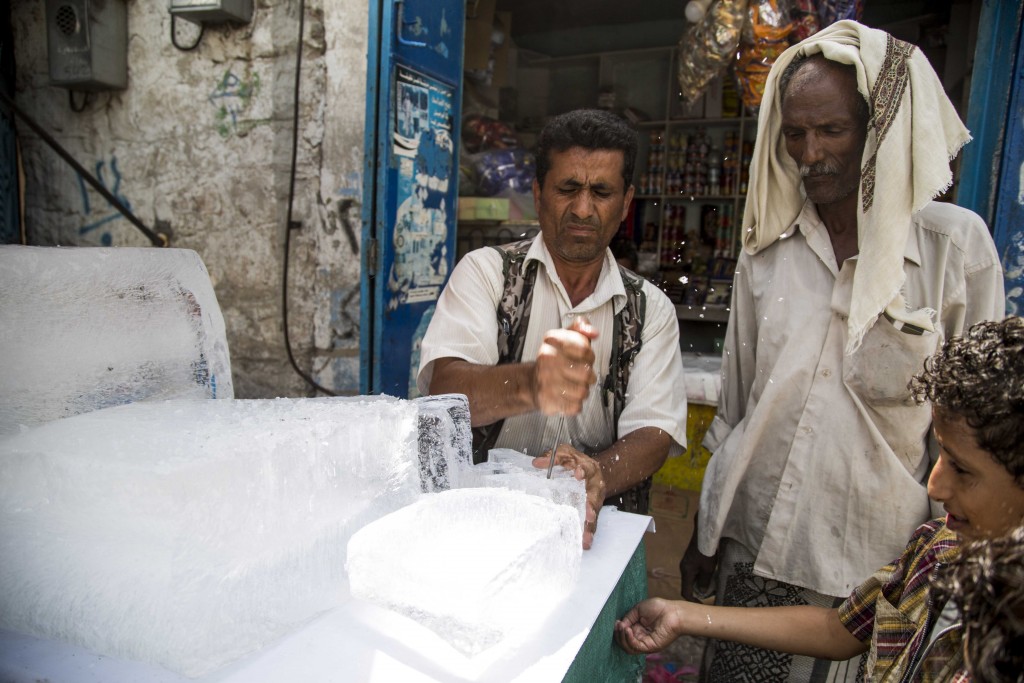 People buy ice on a street in Taiz. The city does not have electricity. (Asmaa Waguih) 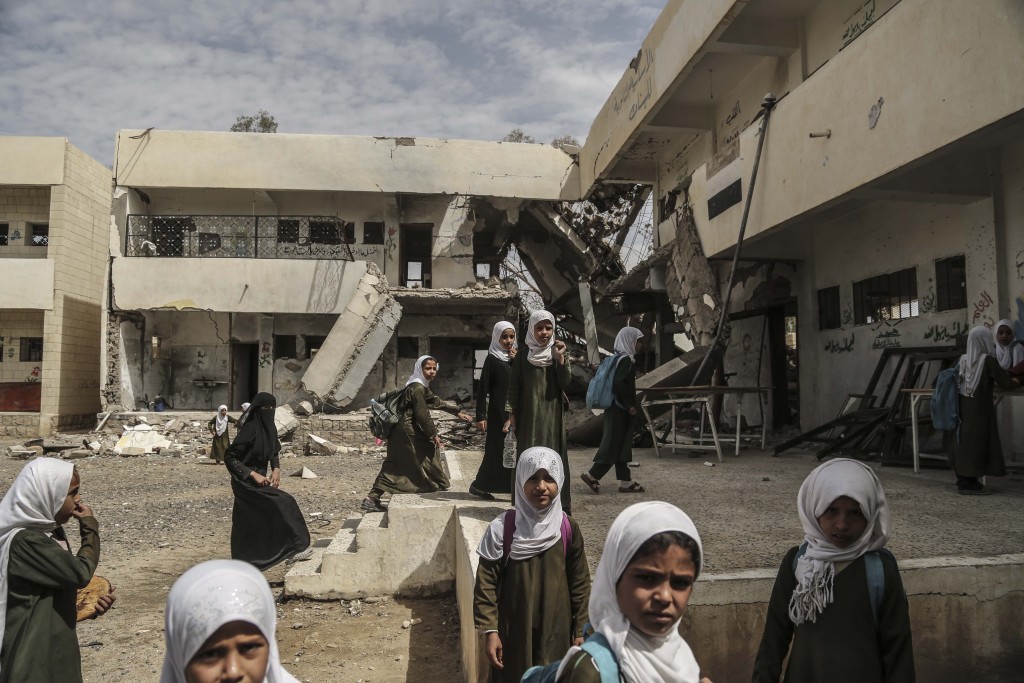 Students at a school for girls bombed by the Saudi coalition. 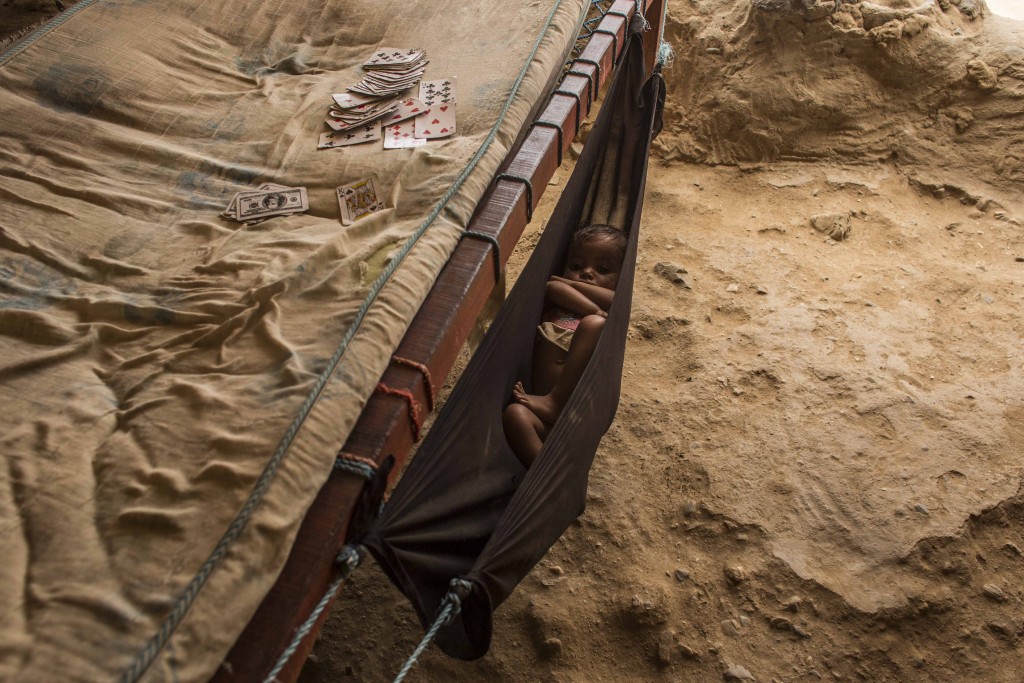 A child in a tent at a displaced persons camp in Al-Manjora. (EPA/ Asmaa Waguih) 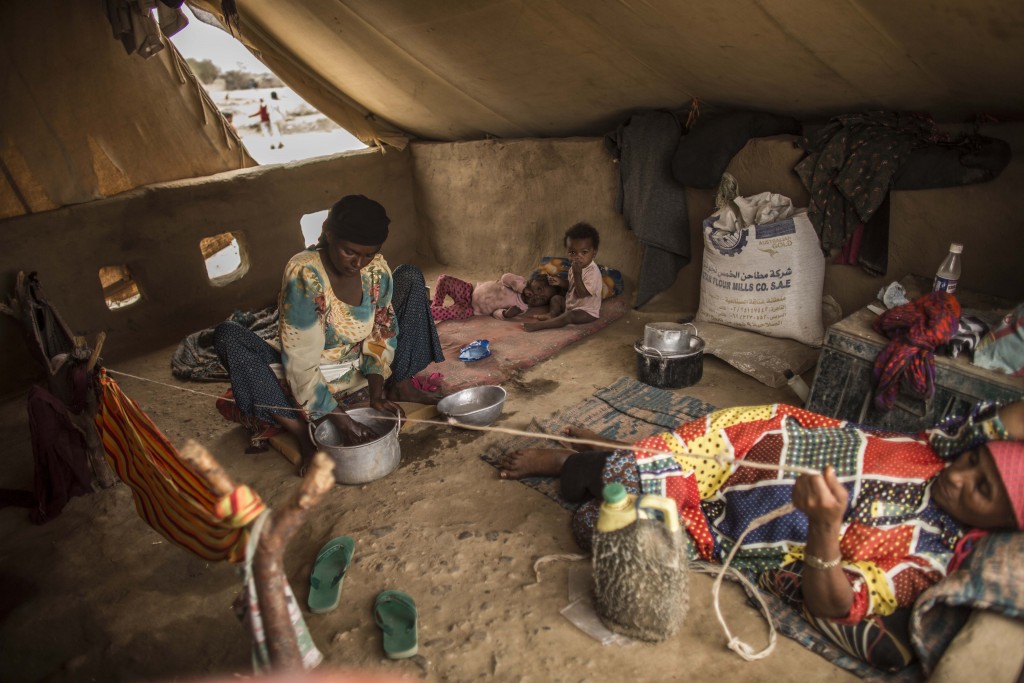 Displaced Yemeni women inside their tent at Al-Manjora. 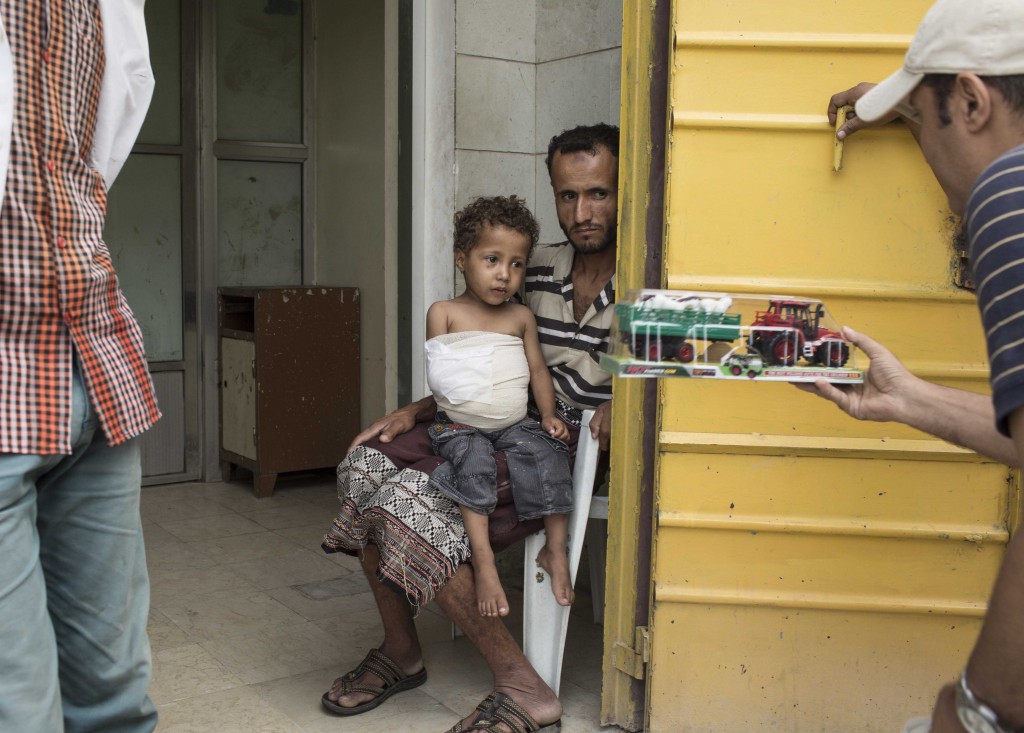 A Yemeni-American man brings toys to a child injured by the fighting. 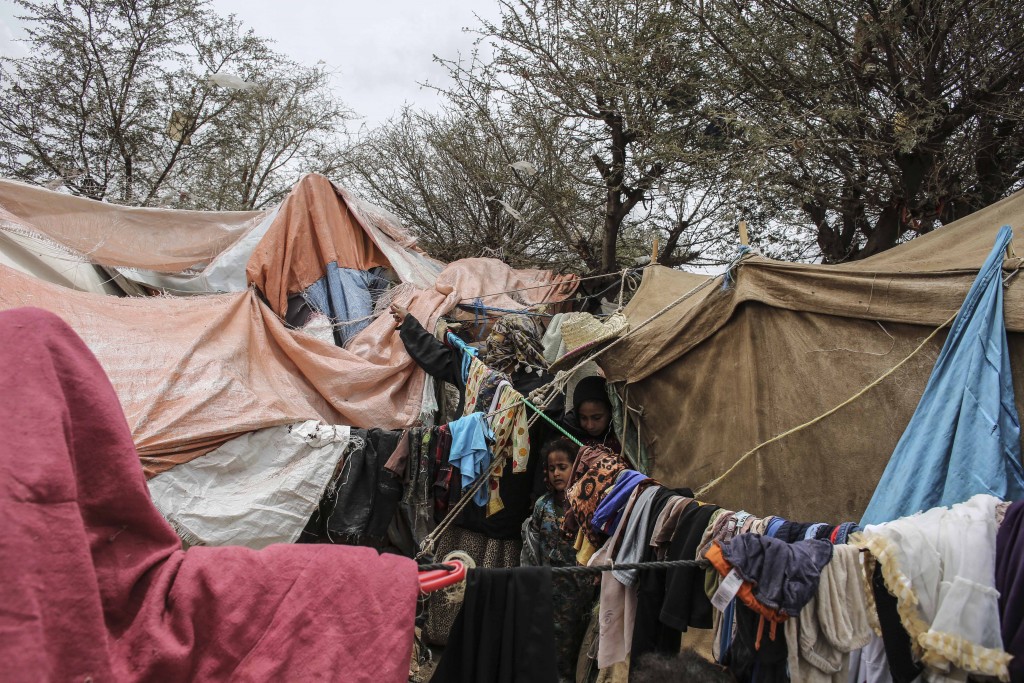 A camp for displaced Yemenis near the capital Sana'a. (EPA/ Asmaa Waguih) 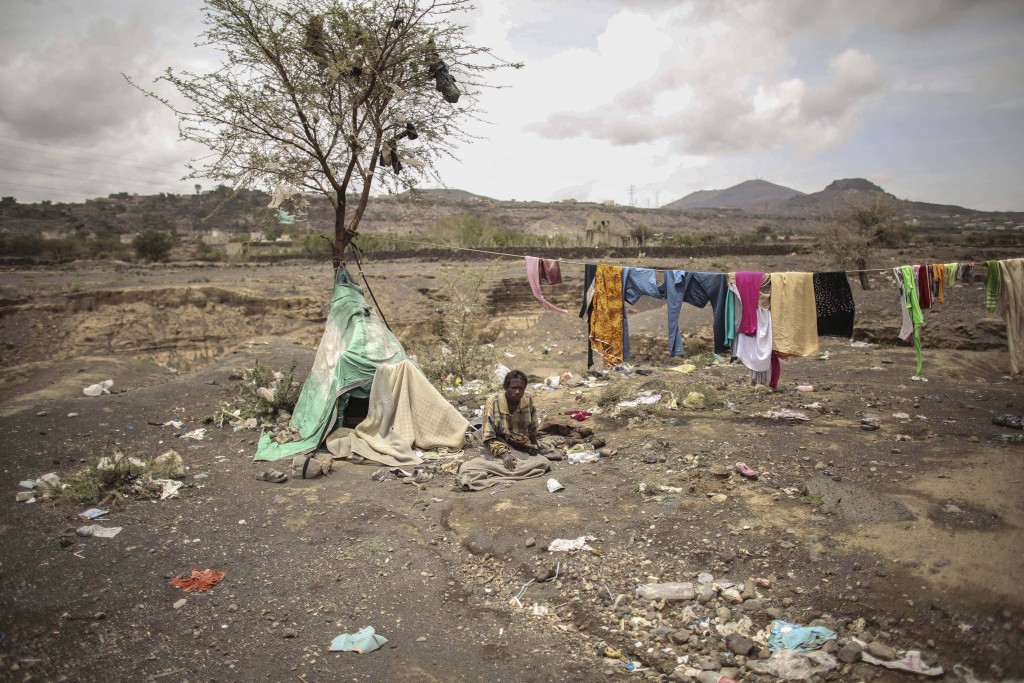 A displaced Yemeni sits by his tent near Sana'a. 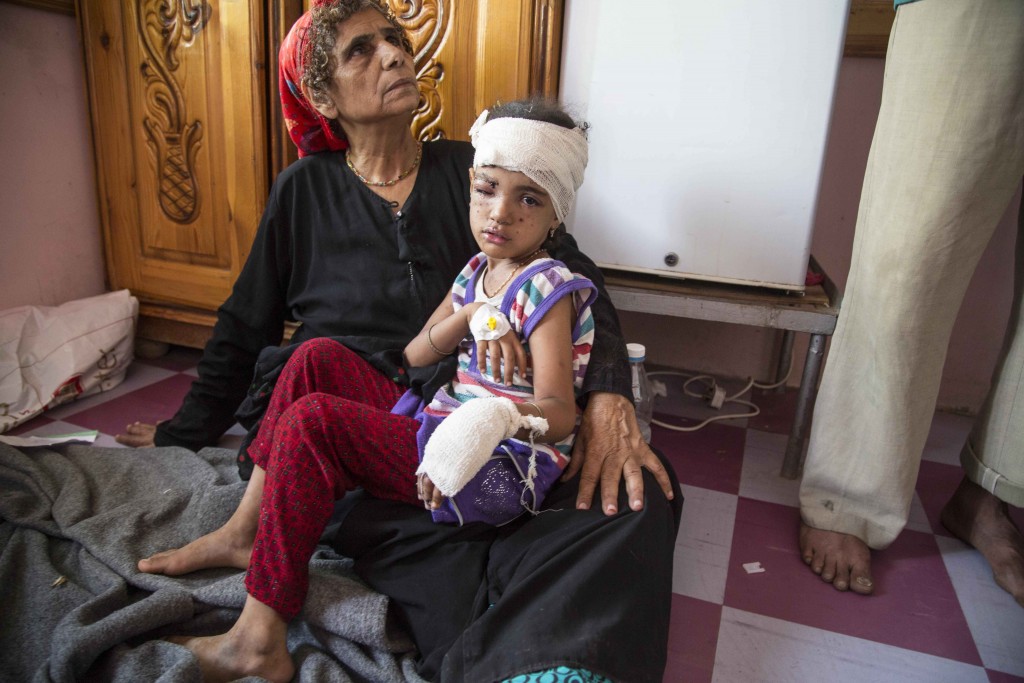 A girl injured by shrapnel, at a hospital in Taiz, Yemen. 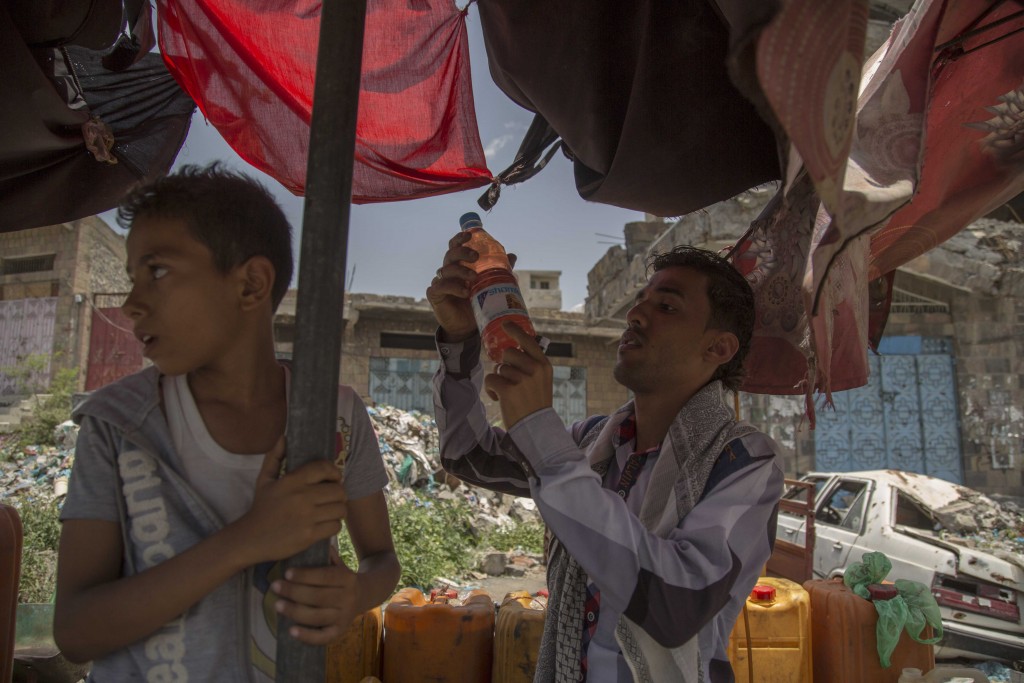 A customer checks the purity of gas sold in bottles in Taiz.

Global Journalist: How would you describe the humanitarian crisis Yemen is going through right now?

Waguih: There are a lot of issues: education, medical issues, displacement, lack of electricity... All of these are important, and Yemenis are suffering from all of it. We’re talking about a country with limited resources. Kids are affected by malnutrition. People have access to hospitals, they are everywhere, but their conditions are really poor. If you don’t have the money to go to another country, sometimes they can’t help you.

GJ: How was your experience with displaced people while you were covering Yemen?

Waguih: Conditions are not like people think they are. Yemen is a tribal country, so people rent places and stay with their families after being displaced from their homes. It’s hard to get photos of displaced people because they’re not as visible as they are in Syria, for example. The people I’ve seen don’t match with real numbers. It’s like there are more than 3 million invisible people.

GJ: What role do child soldiers play in the humanitarian crisis and in the war?

Waguih: Schools have been affected by bombings, so kids are recruited. They train them, they give them weapons, and they tell them they’re fighting against extremists, or even against ISIS. I was asked not to take photos of this. I couldn’t take pictures of young kids or checkpoints. When I was in the north, I had to be with a supervisor, so they could see what I was taking pictures of. They don’t want to show how they manage to get security, because it involves kids and early teenagers. 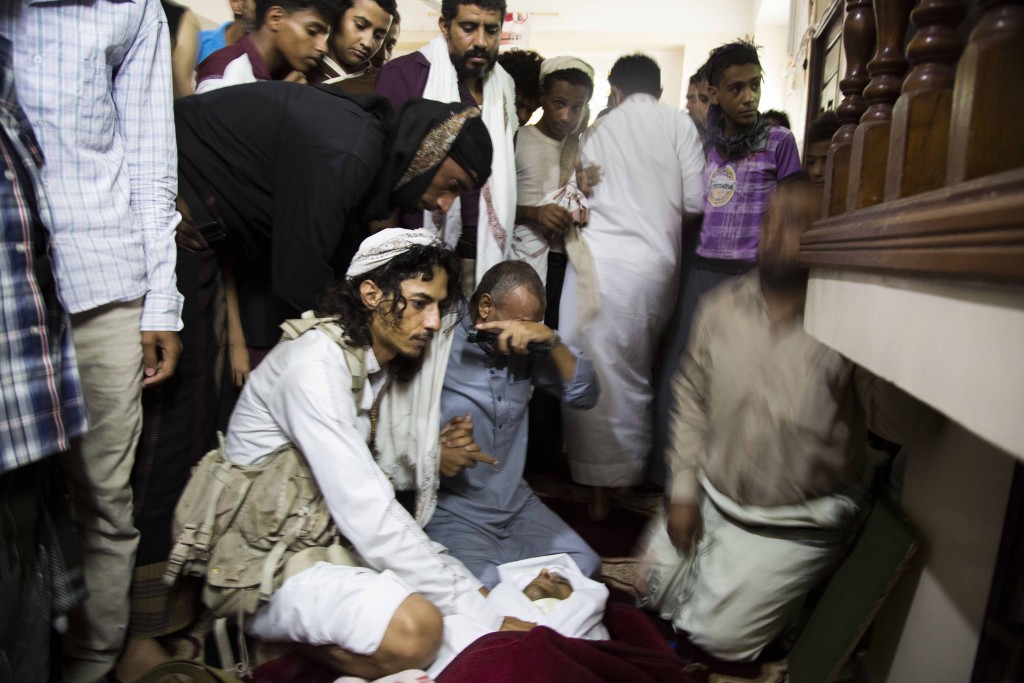 The father of a slain fighter for a pro-government group cries by body of his son in Taiz. (Asmaa Waguih) 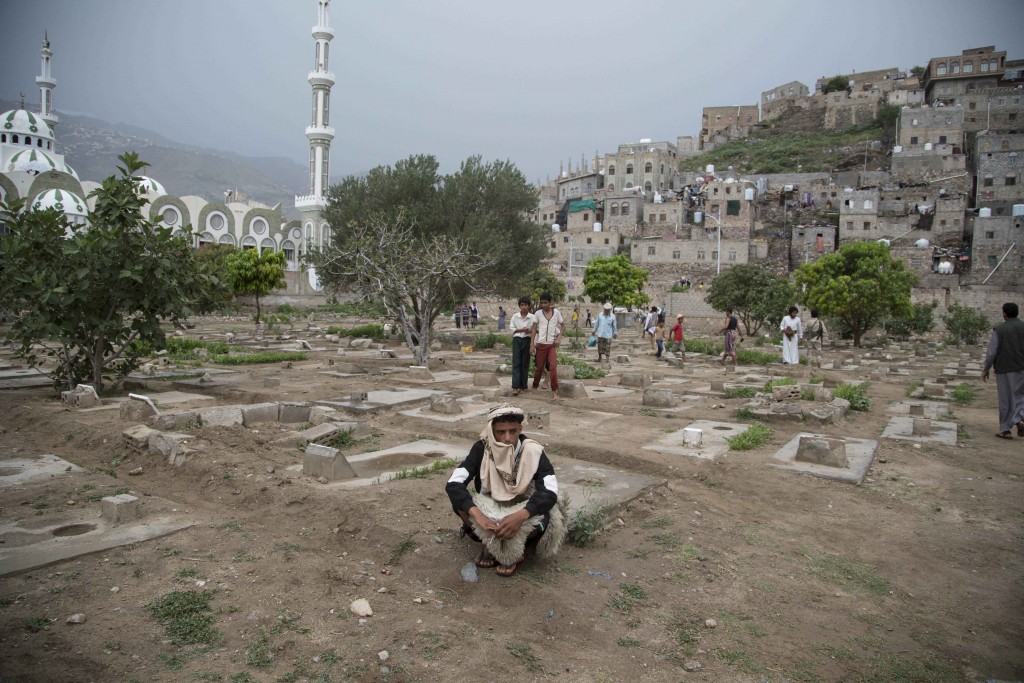 A friend of a slain member of a Saudi-backed group resistance fighters sits during the burial in Taiz. (Asmaa Waguih) 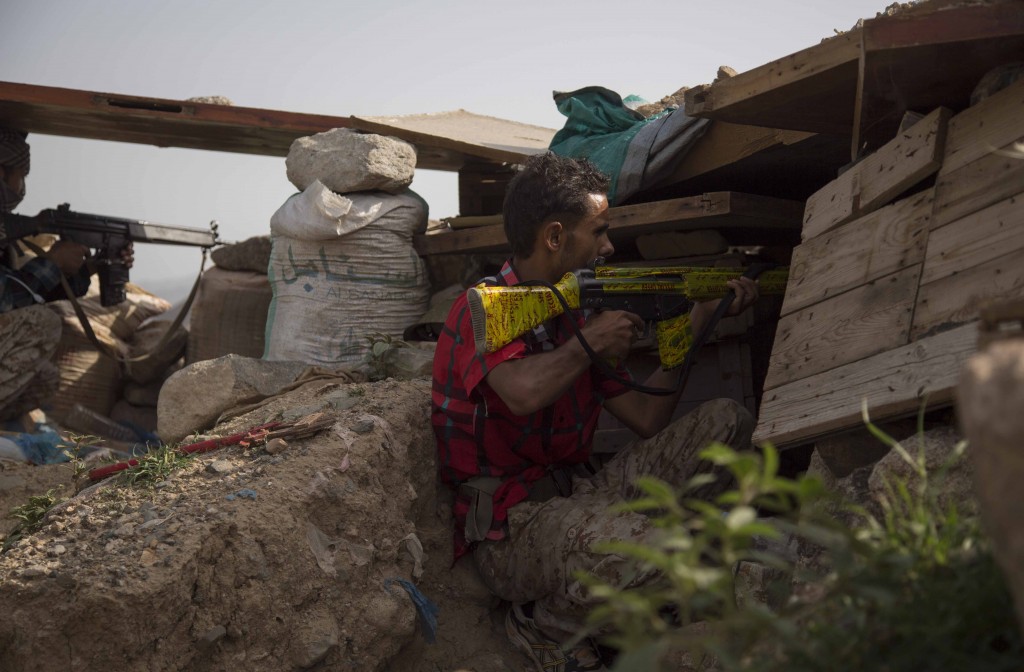 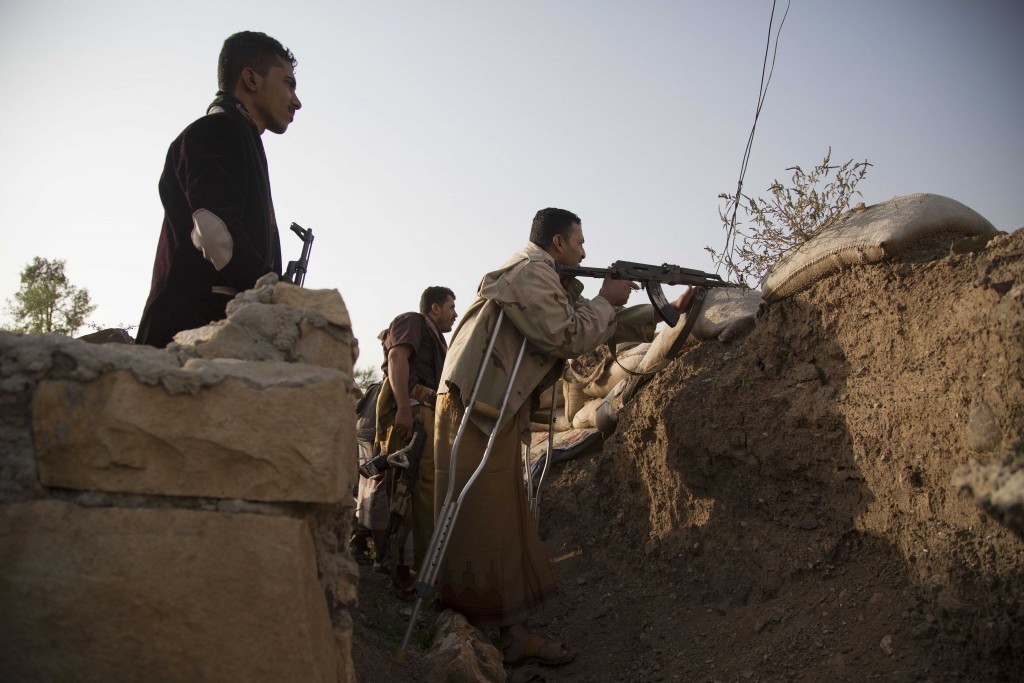 Members of a Saudi-backed "resistance" group, in Taiz in June 2016. (Asmaa Waguih)

Members of Saudi-backed "resistance" fighters at the front in Taiz. (Asmaa Waguih) 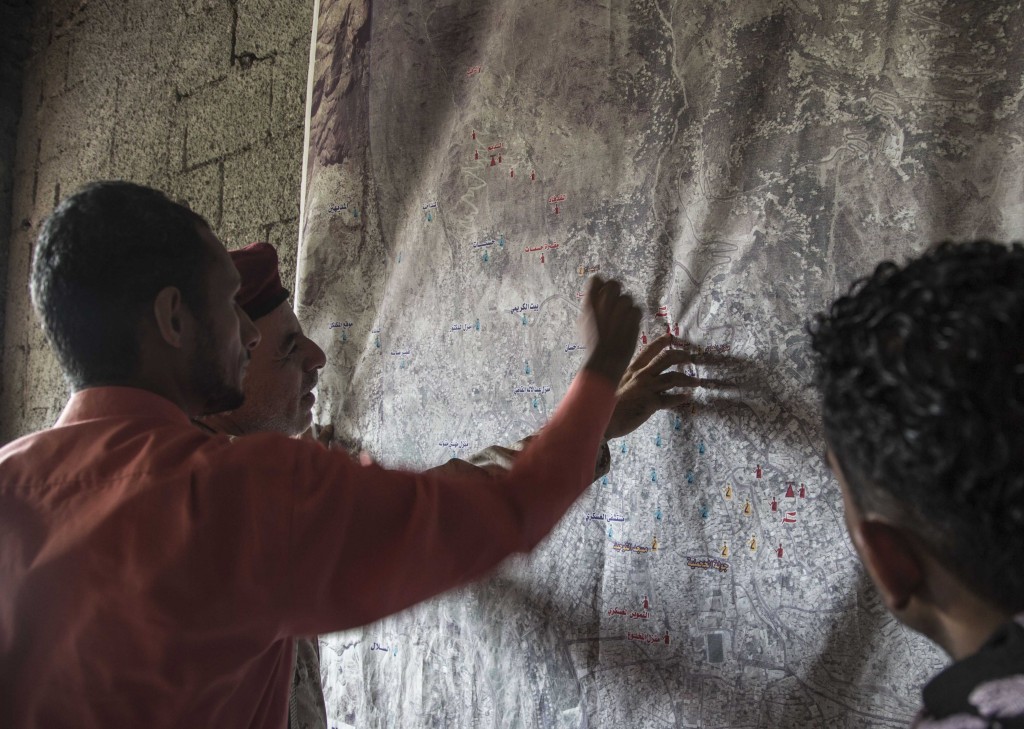 Members of a Saudi-group look at a map that shows areas of control in Taiz. (Asmaa Waguih) 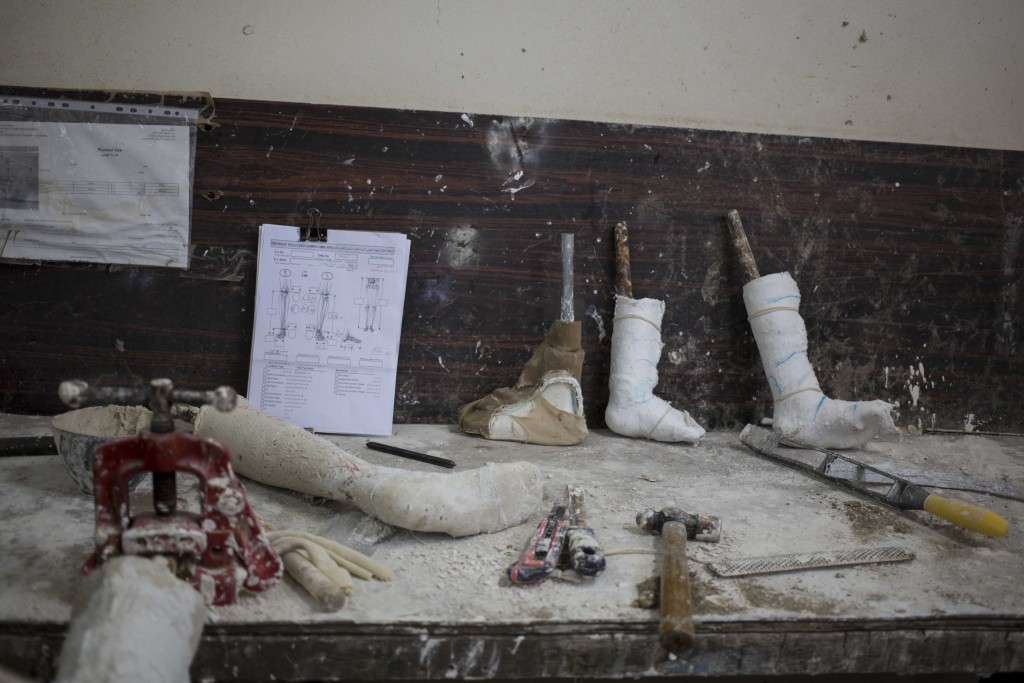 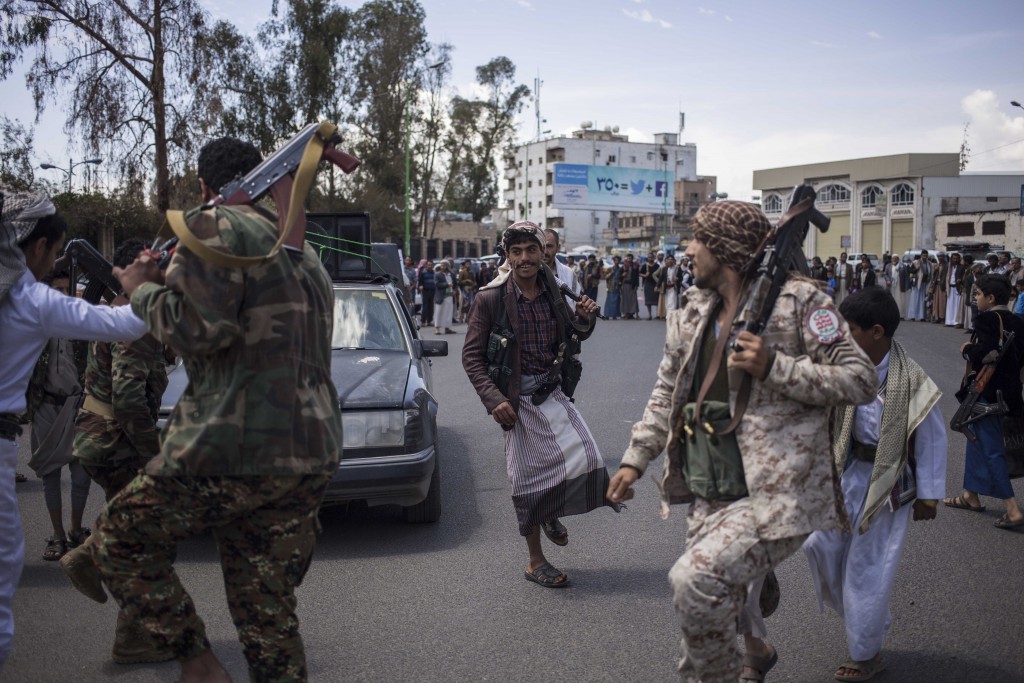 Houthis do a traditional dance at a tribal meeting to gather money and bullets in Sana'a. (EPA/ Asmaa Waguih) 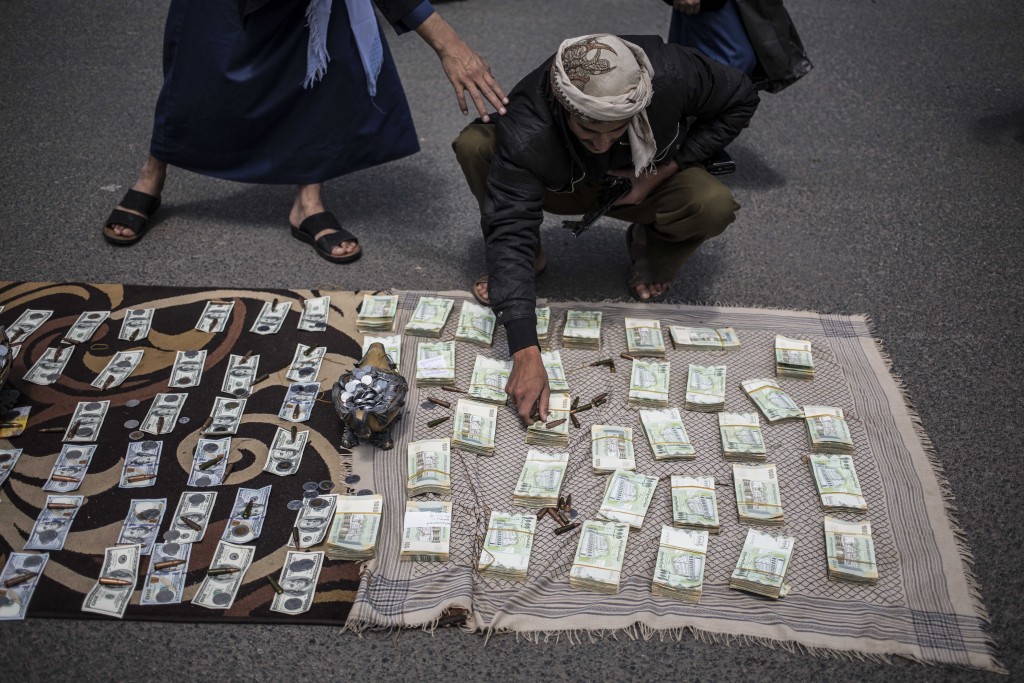 A man puts money and bullets in order at a tribal gathering to support Houthi fighters in Sana'a. (EPA/Asmaa Waguih) 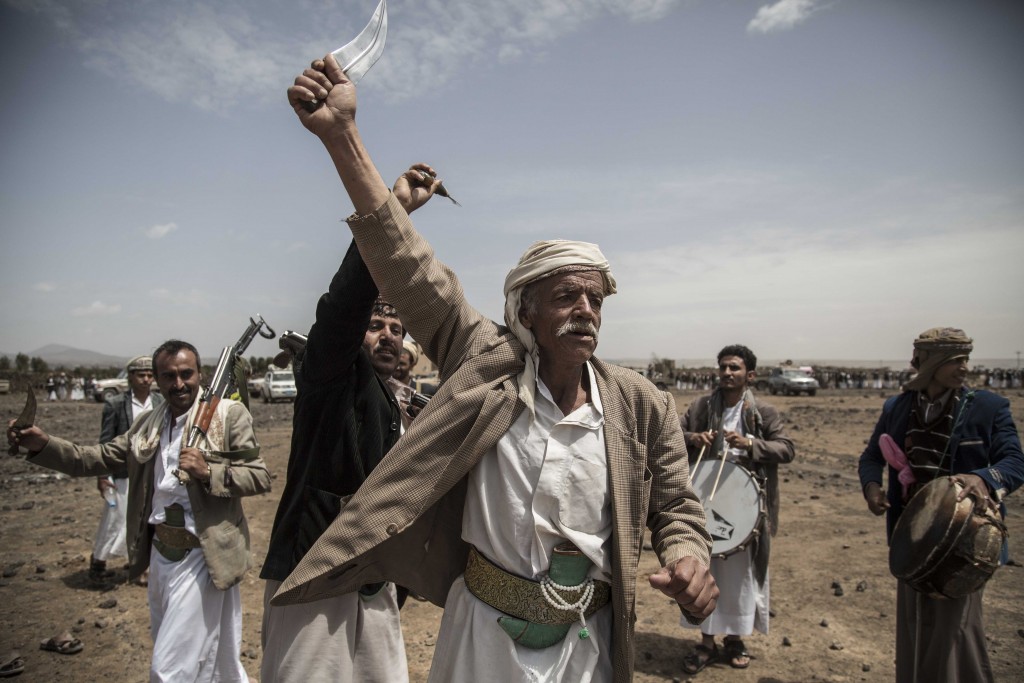 Supporters of the Houthi rebel fighters dance at a parade in Sana'a. (EPA/ Asmaa Waguih) 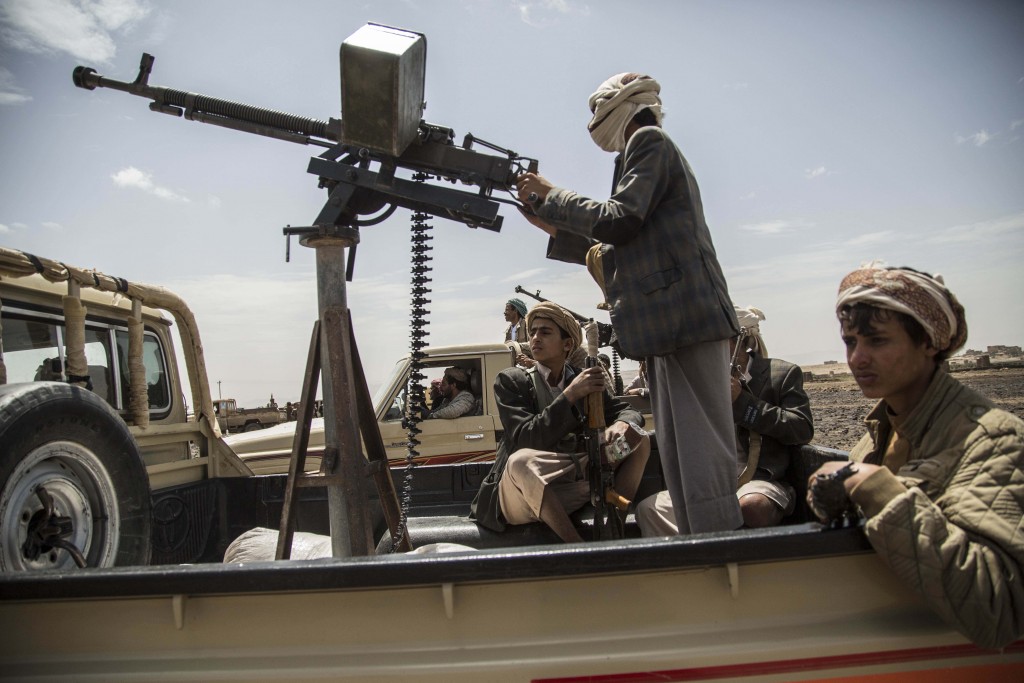 Houthi fighters parade their weapons at a parade in Sana'a in April 2016. (EPA/ Asmaa Waguih) 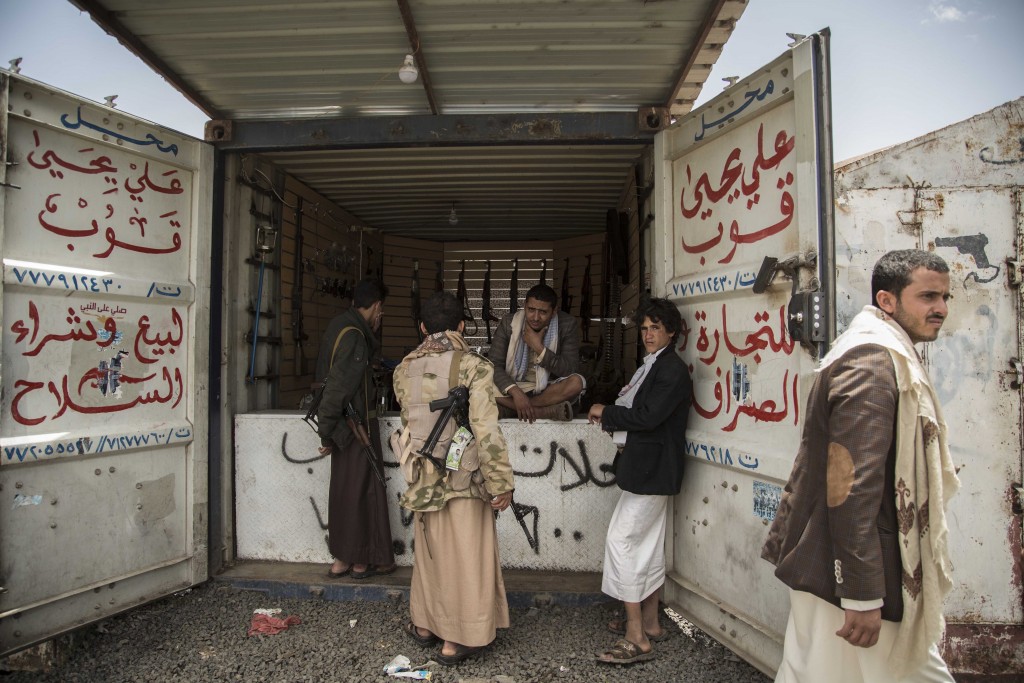 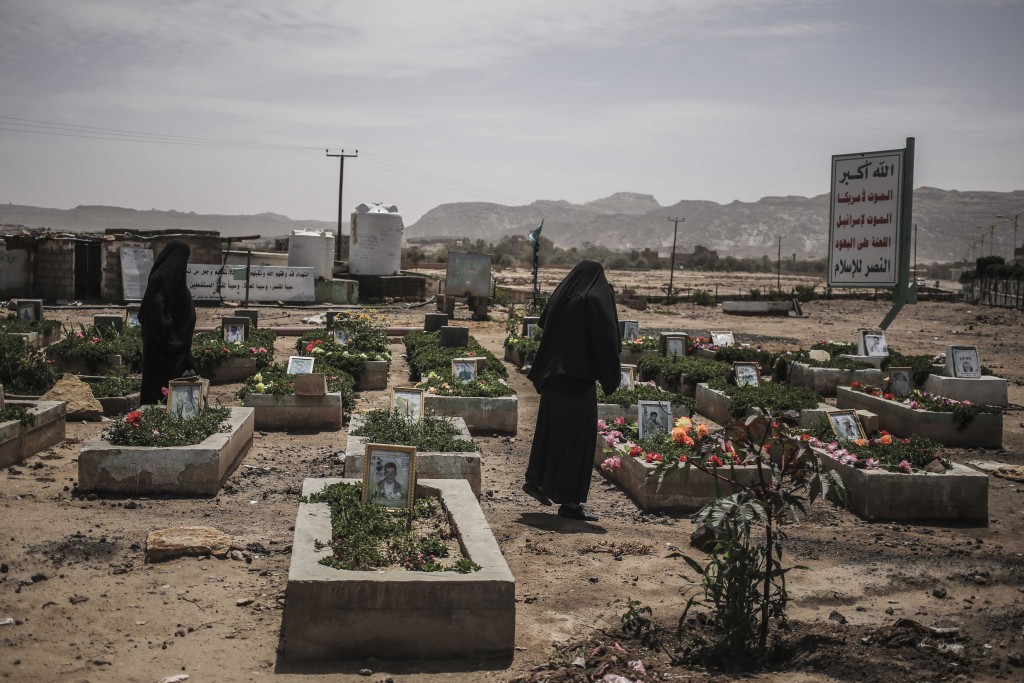 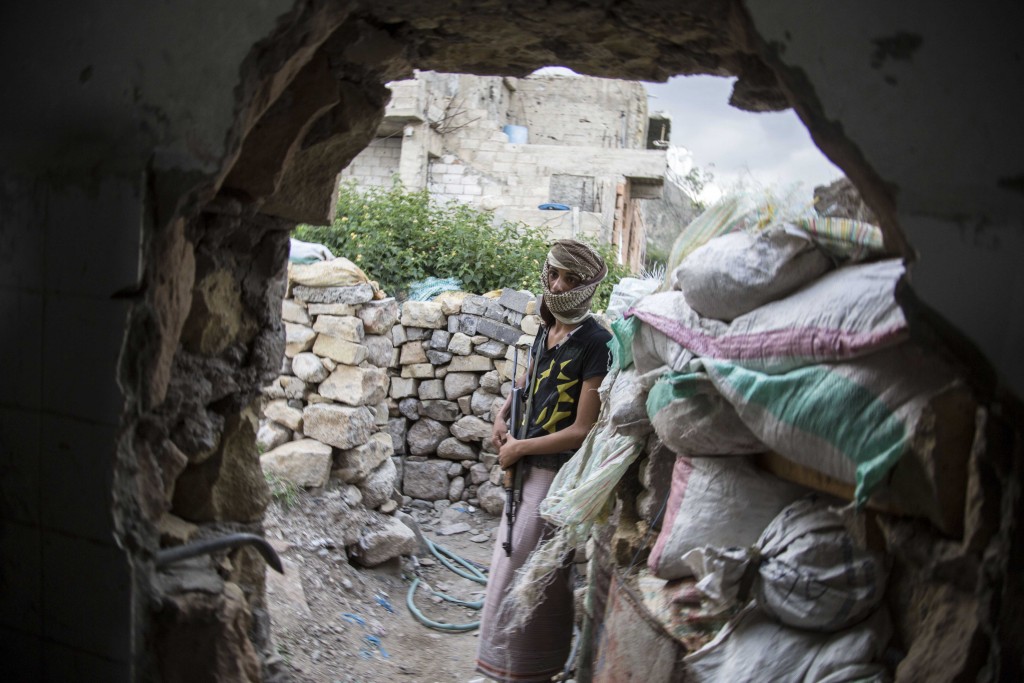 A member of a Saudi-backed militia is seen at a front line position in Taiz, June 5, 2016. (Asmaa Waguih)

GJ: Why has the war in Yemen received so little coverage as opposed to Syria, for example?

Waguih: There has been media coverage on some major issues, such as the Saudi bombing. However, it’s easy to say that all started with a coalition that sent bombs, or that there's an intervention by superpowers like UK and the U.S. It’s easy to blame one side against the other by showing civilian victims, that’s why the media should be showing all sides of the conflict. Nevertheless, al-Qaeda being present in the south makes it difficult for foreign journalists to go to the south. Being an Egyptian woman actually gave me better access than I would have had otherwise.

GJ:What are your predictions for the future?

Waguih: I’m always optimistic by nature. Both sides want to stop the war, but they also want to make gains. They had peace talks, they sat together, but they need to make concessions because in the end, those who are suffering are Yemeni people. Civilians get killed, kids can’t finish school, there are displaced people… If they make concessions, the war will stop and Yemen will get better, but it will take some time. Everyone needs to feel that they’ve gained something.