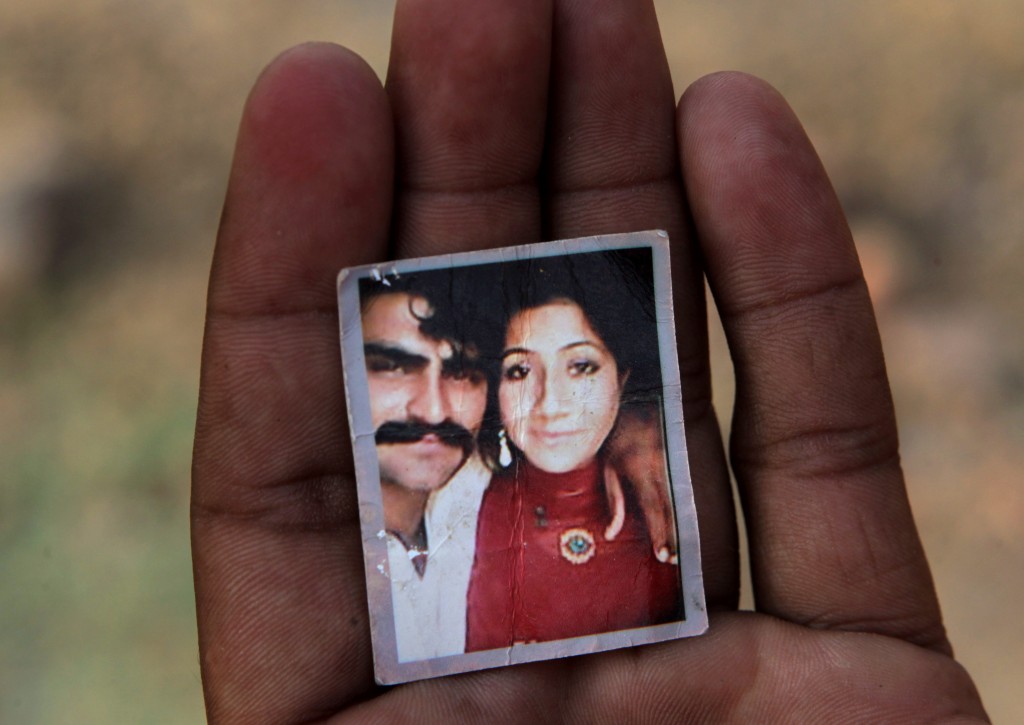 Mohammed Tofeeq dispalys a picture of himself with his wife Muqadas Tofeeq, who local police say was killed by her mother, at his home in Butrawala village on the outskirts of Gujranwala, Pakistan, Saturday, June 18, 2016. Police in Pakistan say they have arrested the mother of Muqadas Tofeeq who is accused of killing her pregnant daughter for marrying against the wishes of her family. Violence against women is not uncommon in Pakistan where nearly 1,000 women are killed each year in so-called "honor killings" for violating conservative norms on love and marriage. (AP Photo/K.M. Chaudary)

"There is a social revolution underway in Pakistan and it is very women-led."

About 1,000 women in Pakistan are killed every year by relatives who believe those women have dishonored their families.

These so-called "honor" killings may come after domestic disputes, allegations of adultery or when women refuse an arranged marriage.

Until recently, Pakistani law allowed those who committed such killings to escape legal punishment if the family of the victim forgave the perpetrator – often a male relative of the deceased.

That changed in October when Pakistan's parliament passed a new law closing the forgiveness loophole and instituting jail sentences of at least 25 years for those found guilty of these crimes.

The move came after a documentary about the issue won an Oscar and a series of high-profile killings gained international attention. This included the July slaying of a Pakistani social media star named Qandeel Baloch by her brother.

But for the Pakistani journalist and author Bina Shah, much more needs to be done. Shah, whose columns have been featured in the New York Times, the Huffington Post and the Pakistani daily Dawn, spoke with Global Journalist's Renee Hickman.

Global Journalist: Tell us about Qandeel Baloch, the social media star killed by her brother who was called “the Kim Kardashian of Pakistan.”

Shah: This Kim Kardashian comparison is really crazy because first of all, Kim Kardashian is a very rich woman. Qandeel Baloch came from an extremely poor family from rural Punjab.

She just struggled and struggled, and she did so many different jobs. She worked as a bus hostess and worked here and there, and was trying to pull herself out of that extreme poverty and into a different world. A glamorous world and a world of modeling and acting.

It’s extremely difficult for people in Pakistan, especially women, to cross social divides like that, on their own.

But she was doing it on her own and she was very self-directed and self-propelled. There’s no kind of comparison to Kim Kardashian, the daughter of [U.S. lawyer] Robert Kardashian.

That came about when she was murdered and Western journalists were trying to compare it to something people could relate to. Pakistani social media star Qandeel Baloch speaks during a press conference in Lahore, Pakistan, June 28. She was strangled to death by her brother in July. (AP Photo/M. Jameel)

GJ: How did the killing of Qandeel relate to the change in Pakistan's "honor" killing law?

Shah: What got the ball rolling was when Sharmeen Obaid-Chinoy won the Oscar for her documentary "A Girl in the River" in February. When Qandeel Baloch was killed that brought a lot of international attention. That kept the pressure up.

Activists and feminists – we have been fighting this for years. It's not like we just woke up this year. It's been an ongoing struggle for years and years.

GJ: You've said the change in the "honor" killing law is not enough, what is needed are bigger cultural shifts.

Shah: In order for things to change, people really have to see women as truly equal and truly individuals rather than appendages of men...mother, sister, daughter, wife.

Well if she wasn't, if she was an orphan with nobody, would that make it OK?

We're still stuck in that state where we're seen as appendages as opposed to individuals in our own right. To me that's the biggest change [needed] in mentality.

GJ: Who in Pakistan is working to make those changes and how are they doing it?

Also there’s quite a big movement among educated Pakistani women to understand Islam and take the rights that Islam has given women, which are many. Even that is a revolution in itself.

They’re learning the Quran for themselves, they’re going to classes to understand the message of Islam, rather than letting it be spoon-fed to them by male clergy or male authorities.

They’re going to women teachers and they’re listening to themselves.

I think there is a social revolution underway in Pakistan and it is very women-led. We need to give it another 20 years and see how it goes.

GJ: Are you optimistic that the practice of "honor" killings is dying out?

Shah: I think there will always be violence against women. I don’t see that dying out anywhere in the world...

When you’re emerging from patriarchy as I’ve seen in my own country, you can’t do it unless you have allies and they have to be male allies. They have to be, by virtue of the fact that they control everything right now. If they are willing to make changes, then society will change.

We’re talking about community-based changes. Communities change when men and women decide to make those changes together. Not when women do it and men create a backlash and then there’s an even worse situation.

I just don’t want us to be considered victims. Muslim women are not victims, they’re fighters and they’re struggling for change.