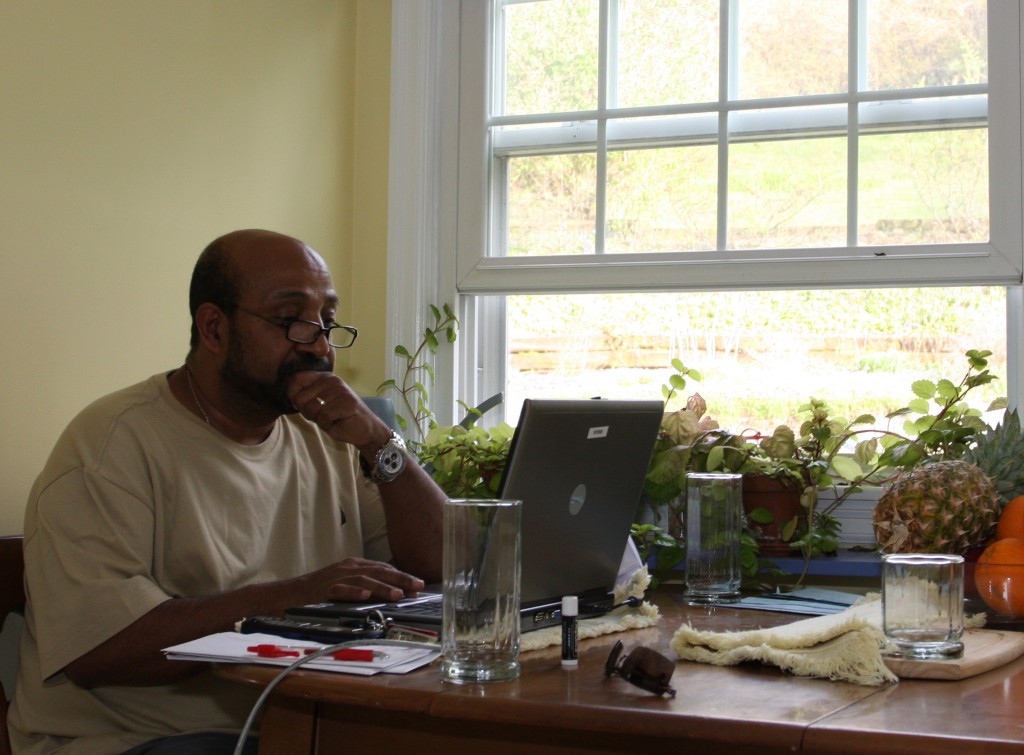 Berhanu Nega works on his computer in the kitchen of his house in Lewisburg, Pa., in 2009. Ethiopia sentenced him to death in absentia that year for allegedly supporting a coup to overthrow the government. (AP Photo/John Zeedick)

"We're not going to sit down and die."

Ethiopian rebel leader Berhanu Nega has tried democratic politics before. Now the former Bucknell University professor and one-time mayor-elect of Ethiopia's largest city is trying to topple his home-country's repressive government through the barrel of a gun – all in the name of democracy.

To do so he's allied his Ethiopian rebel group, Ginbot-7, with the government of neighboring Eritrea – a country often referred to as "the North Korea of Africa" and labeled by Human Rights Watch as a "giant prison" for its widespread use of forced labor and government conscription.

But back in 2005 Berhanu was a leader of the Coalition for Unity and Democracy, a new opposition alliance that was challenging the ruling Ethiopian People's Revolutionary Democratic Front (EPRDF) in what promised to be the East African nation's first democratic elections. The EPRDF itself had taken power as a rebel group that helped topple the country's former Communist regime in 1991. For its first 14 years in power, it had run the country as a virtual one-party state, but now it was allowing a broad-based opposition to challenge it in national elections.

On election day, support for opposition was much stronger than expected. The CUD won the capital Addis Ababa overwhelmingly, and Berhanu was chosen as mayor. But the EPRDF claimed a majority in the national parliament – a result the opposition disputed. Over a series of tense weeks of negotiations, opposition demonstrators were met by security forces firing live ammunition. Berhanu and other opposition leaders were jailed on charges including treason and genocide.

After 21 months in prison, Berhanu was released and returned to Pennsylvania to teach economics at Bucknell. He also began raising money for a new Ethiopian opposition group, Ginbot-7, which sought to overthrow the Ethiopian government by any means. Ethiopia's government declared Ginbot-7 a terrorist group and sentenced him to death in absentia. Last year, Berhanu left Bucknell and moved to Eritrea, a country that fought a bloody border war with Ethiopia from 1998-2000.

With Ethiopia declaring a state of emergency last month amid widespread anti-government protests that have left hundreds dead, Berhanu spoke from Eritrea with Global Journalist's Bryce Arthur about Ginbot-7's plans, the U.S.'s close alliance with the Ethiopian government and his reasons for allying with Eritrean dictator Isaias Afewerki. What follows is an edited version of their exchange. Berhanu, elected mayor of Addis Ababa in 2005, celebrates after his pardon and release from prison in 2007. (AP Photo/Anita Powell)

Global Journalist: What is the biggest problem with the Ethiopian government?

Berhanu Nega: I believe that the Ethiopian government is one of the most brutal dictatorships in the continent. It’s a regime that has divided the country along ethnic lines, trying to take advantage of fissures between different ethnic communities so it can divide and conquer. It’s also led by a small minority group who really do not take into account the rights of the majority of the population.

Global Journalist: Do you see yourself as a political figure or as a rebel fighter?

Berhanu: The opposition to the government is political. Ginbot-7 was established in 2008, after the 2005 election was totally stolen, and since then it has taken a position to use whatever mechanism necessary to ensure democracy in the country. That includes peaceful protest and the establishment of self-defense units to defend against the brutality of the regime. We employ diverse methods.

Our main objective is political, we are not interested in armed struggle as such. If this problem can be solved peacefully tomorrow, that’s all we want. However, what we see are people being killed, and thousands being imprisoned. We tried to establish targets for peaceful transition, but when all failed, people don’t have any other options.

You have to understand, this has been going on for 25 years. People have been trying to see if there is any possibility for peaceful transition, and after 25 years, people just simply gave up. The only thing people are getting is increased brutality on the part of the regime, so they start to say “We’re not going to sit down and die for asking for the most basic rights afforded by the constitution.”

GJ: Ethiopia has close relations with the West. Eritrea is under U.N. sanctions. What about the international interests in your conflict?

Berhanu: The West in particular seems to treat this rather brutal [Ethiopian] regime as an ally, especially in the war against terror. In Somalia they have Al-Shabaab, and the Ethiopian regime has been sending troops to deal with that organization. This, I suppose, was seen as good governance by the West and so the West has has been footing the bill for that action for a very long time.

[Ethiopia's] opposition has been calling for the international community to rein in [the Ethiopian government’s] brutality and to be on the side of the people people as opposed to the side of the regime. The West, in its wisdom, has chosen to fight terror with regimes that terrorize their own people.

Of course, when people are terrorized they revolt at some point, and that’s what we are seeing. The opposition is still hoping the international community will see what is actually happening in the country. Unfortunately up until now, the West has chosen to shore up the regime in the name of its war on terror. GJ: What about the U.S.? President Obama once referred to the Ethiopian government as "democratically-elected."

Berhanu: The United States has been the [primary] diplomatic supporter of this regime. When Obama came to Addis Ababa and made that unfortunate statement, it transmitted to the Ethiopian people “you shouldn’t expect anything from the international community. If you want freedom, you will have to fight for it.” It transmitted that there is no international community that will come to support democracy, it is something you will have to do on your own.

GJ: Eritrea itself has considerable problems. Would you say that your association with that government delegitimizes your operation?

Berhanu: In the first place, Ginbot-7 operates within Ethiopia and several other countries, as well as in Eritrea. But to come to your basic question - does the struggle for democracy get tainted when it associates with undemocratic regimes - my view is that when you are an underdog, you get support from where you can get it.

If one’s cause is measured by the supporters it has, I don’t know how you can call the United States democratic. It has friends all over the world that are brutal dictatorships. The nature of a movement should be decided by its own principles.

We would love to get support and aid from the West but we have no particular choice in these terms.

GJ: Were Ethiopia to become democratic, would you seek office?

Berhanu: I think that whoever comes in power is a very, very secondary issue. I really think that once people have the chance to choose their own leaders, and once all the institutions of a democracy are in place, then who actually comes into power is insignificant.

If you are asking me my personal interest, I honestly have no interest in anything other than seeing the country becoming democratic. Whoever is elected, as long as it is done democratically, is fine by me.